As I pulled on my boots, a gentle breeze swayed the branches above my head. The sun shone through, creating abstract patterns beside me on the garden bench. It was another glorious day, a scorcher. 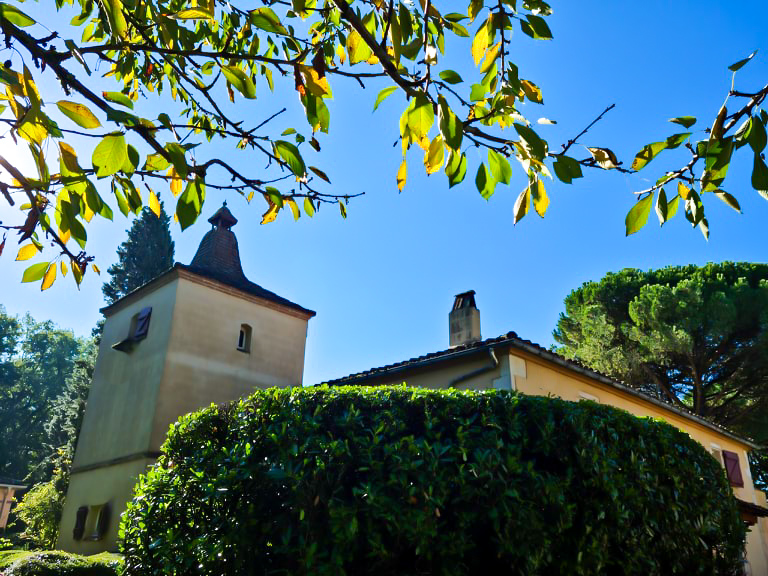 I was about to take the dogs into the forest, the perfect place to enjoy the emerging palette of autumnal colours. What would we see? I wistfully imagined discovering lots of ferny woodland plants and seasonal fungi peeping through rain freshened earth. With any luck, we might spot some wildlife too.

So much for waxing lyrical.

The dogs tore around the corner like a couple of hooligans, instantly snapping me back to reality. Aby started howling like a maniac, which sent Max into overdrive. Enthused by the din, he promptly flattened her. Bad move. Several yelps and tufts of fur later, we set off.

Ten minutes of hard walking took us to our baby waterfall. The flow was light, barely enough to dapple the pool below. Trees backlit by the sun reflected golden-green tints onto the water’s surface. It was the kind of tranquil scene to make most beings sigh with contentment. But not Max. 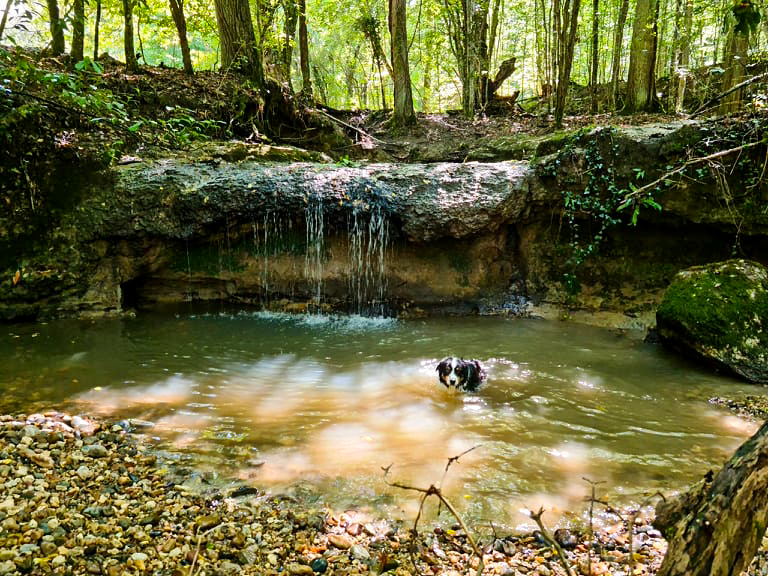 Thrilled by the sight of his favourite wallowing spot, Max threw himself into the drink, soaking Aby, who followed at a more sedate pace. As it was so hot, I indulged them with a game of ‘sticks’ and ‘find the sunken stone’ (which Max has never got the hang of) before resuming our walk.

We were close to the forest boundary, so I decided to check the electric cable fence. The dogs thought this was a marvellous idea, mainly because we were in hare country. They charged ahead to flush out siesta-ing long-eared foes.

Just as I reached the cables, my phone rang. It was Jack.

“Do you want picking up?”

“What about the weather?”

Unless he’s on a rant, my husband uses words extremely economically, so much so that I often have to read between the lines. I had a go.

“A freak storm has hit us. It’s pelting down here.”

Incredulous, I looked skywards at a pathetic wispy cloud.

“You could say that. The drive is flooding, and groundwater is coming up in one corner of the kitchen. I’d better come and collect you.”

“Gosh, that sounds awful. Look, don’t worry, it must be passing from a different direction. It’s gorgeous here.”

On we continued in the sunshine to a high point in the forest. We have lots of magnificent oaks with tubby Friar Tuck girths here, so I guess they must be pretty old. We crunched over carpets of plump acorns and juicy crab apples. The combination of fruits is a feast for several forest dwellers and especially wild boar. No wonder they love scrumping in our woods.

I stopped to check on Max, who was busy eating something in a bush. The vile, nose-wrinkling smell suggested it was gruesome. As I hauled the guilty mutt out of the brush, something landed on the back of my neck. Assuming it was a mosquito, I gave myself a hearty slap. Seconds later, there was a second landing, but this time it was more of a splat!

Bemused, I walked to a clearing with Max still attached to the leg of some long-departed animal. To my surprise, the sky had transformed from bluebird blue into a morass of angry greys. I had one of my ‘Uh-oh’ moments. I’m prone to having those.

Occasional drops quickly turned into a steady flow, which rapidly became a downpour. The transformation was ominously dramatic. It was time to head home. Aby was off on a special ops assignment, so I called her. I started separating Max from his stinky limb when my phone rang again.

“Are you sure you don’t want me to collect you? It’s torrential here.”

“Misguided optimism, that’s your problem. I’ll come now before it gets any worse.”

“Are you sure? If it’s that bad, you won’t be able to get the car down the tracks. Anyway, we’re a couple of kilometres away.”

As we headed for the trail leading to the Carré observation hide, just to make things more fun, the wind whipped up into noisy chaos. Not the conditions designed for fun woodland walks. 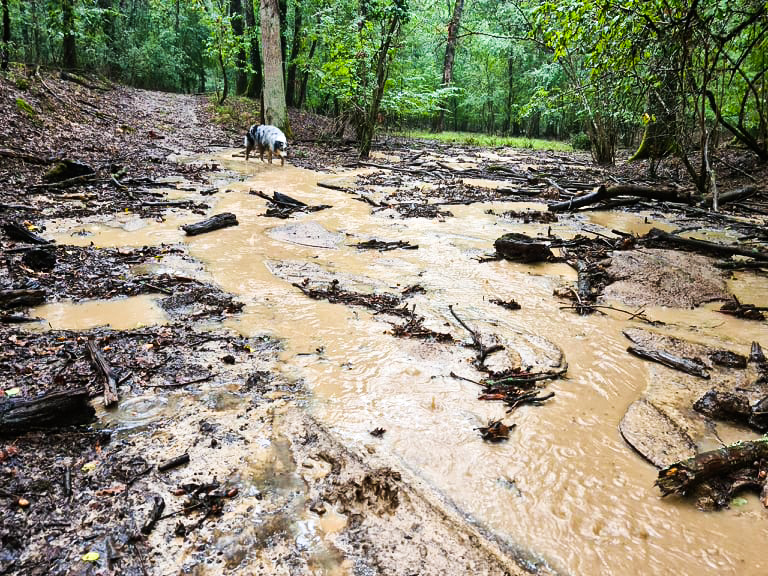 Acorns, debris and water clattered down as we rushed towards our turning. Sheets of water drenched us at every clearing, big fat drops doing their best to dislodge my contact lenses. It may have been temporary partial sightedness that caused my next misjudgement. We had gone too far.

Rather than turning back into the teeth of the storm, I decided to carry on to the next connecting track. By this stage, Aby and Max, who let’s remember love water, had started giving me ‘we’re fed up now’ looks. Assuring them it was all jolly good fun, we found the turn and started sploshing downhill.

(By clicking on the YouTube video below, you’ll get an idea of how quickly the water was flowing down the tracks)

This was sporty. I couldn’t believe how quickly the conditions had deteriorated. Muddy rivulets formed in ruts as we skidded and slid along the paths. Max galloped ahead. For some reason, he’d decided to become hero of the day as pack leader, which was sweet, but such a bad idea. I saw it before he did. A small sea had formed in a particularly deep groove.

Too late. Max hurtled straight in and disappeared. Up he popped like a cork in the middle. Momentarily forgetting his mission, he bobbed around, looking confused for a bit before swimming to the other end. Aby gave me one of her, ‘huh, typical’, looks. We cut through the forest instead. 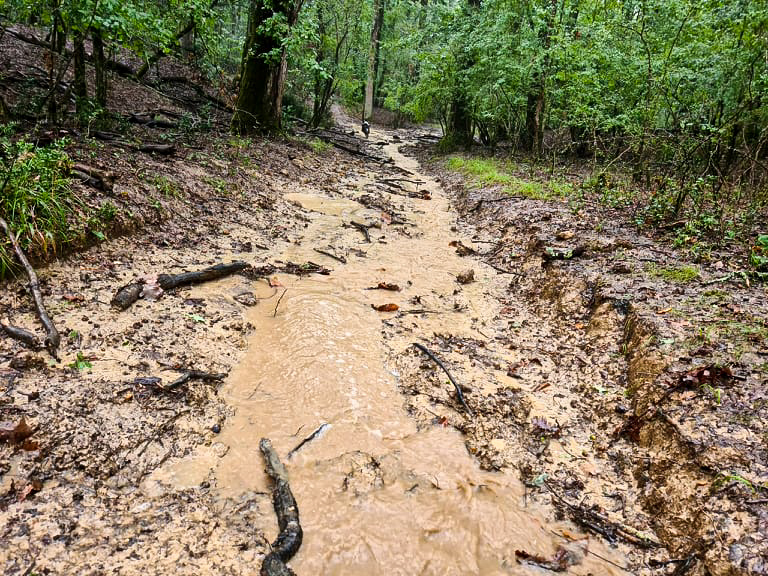 My phone went again. This was a seriously bad time to have a chat. It was Jack.

“Where are you now? I’ve been at Carré for ages.”

“You and your bloody sense of direction. Hurry up. It’s getting worse out here!”

“I couldn’t see properly with the rain! Anyway, never mind, we’re nearly with you.”

We weren’t, but there was no point bothering him with detail. After another couple of detours, mainly because I didn’t fancy a swim, we reached a big meadow. Although Jack’s car wasn’t far, this was the first time we were in a fully exposed area. No wonder he was keen to come and help. It was hellish.

“Thanks for rescuing us. Wow, this is vicious!”

“I know, it certainly wasn’t forecast. Good God, what’s happened to your face? Have you had an accident?”

I pulled down the visor to check myself in the mirror. Oops. My one shout at femininity had let me down. Mascara had joined the rivers of rainwater pouring down my face. I looked like Alice Cooper in his rock days.

“Oh, that, it’s just a spot of make-up. I should have used the waterproof variety.”

“I don’t know why you bother, unhygienic stuff if you ask me. Anyway, let’s go home before you catch your death of cold.”

Getting back wasn’t altogether straightforward either. Brooks had burst their banks, and the tracks in the lower part of the forest were now so waterlogged the car was bound to get stuck. After some scouting around, we took a different route on higher ground and eventually returned soggy but unharmed. 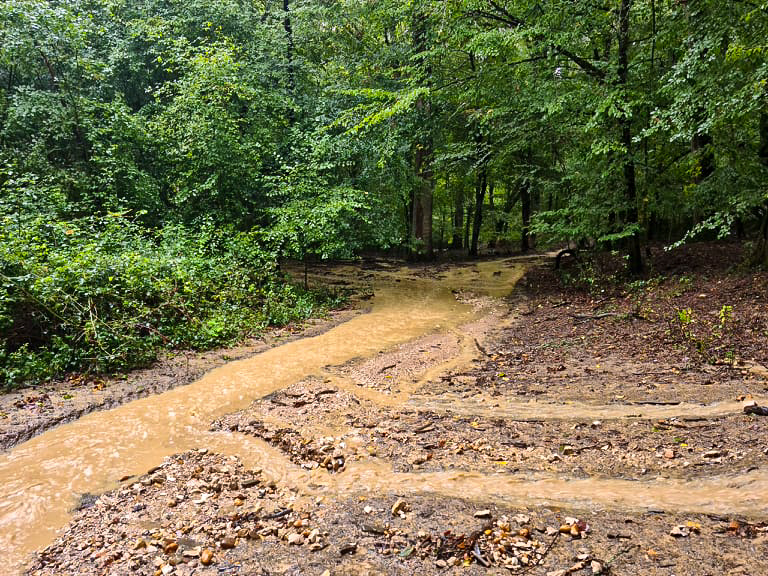 The dogs heroically succumbed to being towelled down and swaddled in their cosy fleeces. Ravenous after their afternoon adventure, they gobbled down their suppers and clambered onto their beds for a kip. Now it was time for my shower.

As the rain continued to lash down, it occurred that the next time Jack calls to say we’re in the middle of a severe storm, I should probably follow his advice. It really was a bit wet! 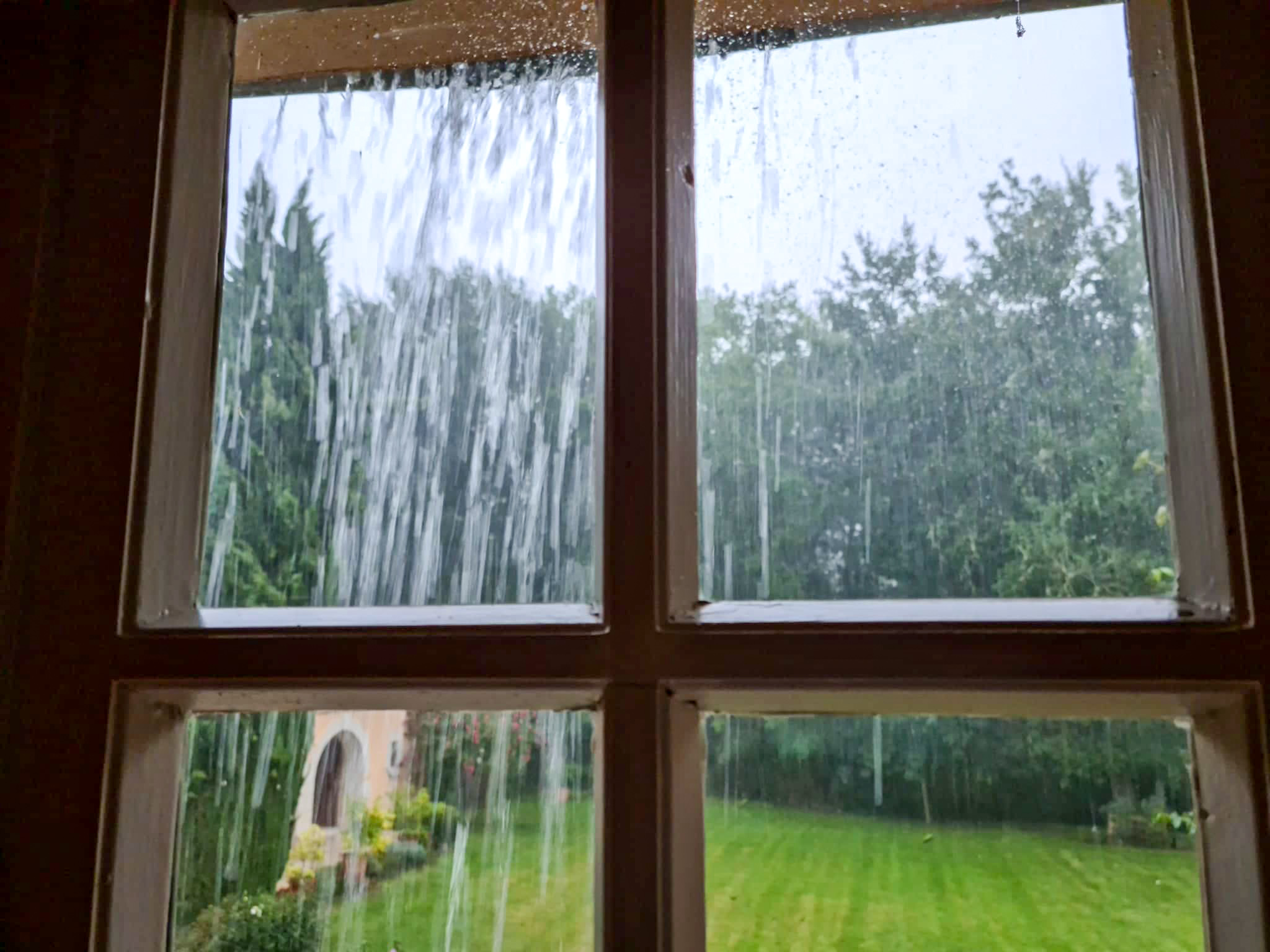