According to legend, it began life in the 6th century. Truth or fiction? It’s hard to know as it wasn’t until the end of the 8th century that documents officially recorded its existence. And the place? It’s Moissac Abbey.

Visitors to Moissac can hardly miss the abbatial church with its extraordinary doorway. The tympanum’s iconography comes from St John’s Book of Revelation and features the moment of Christ’s glorious return to Earth. Believers and non-believers alike are enthralled by this extraordinary art. 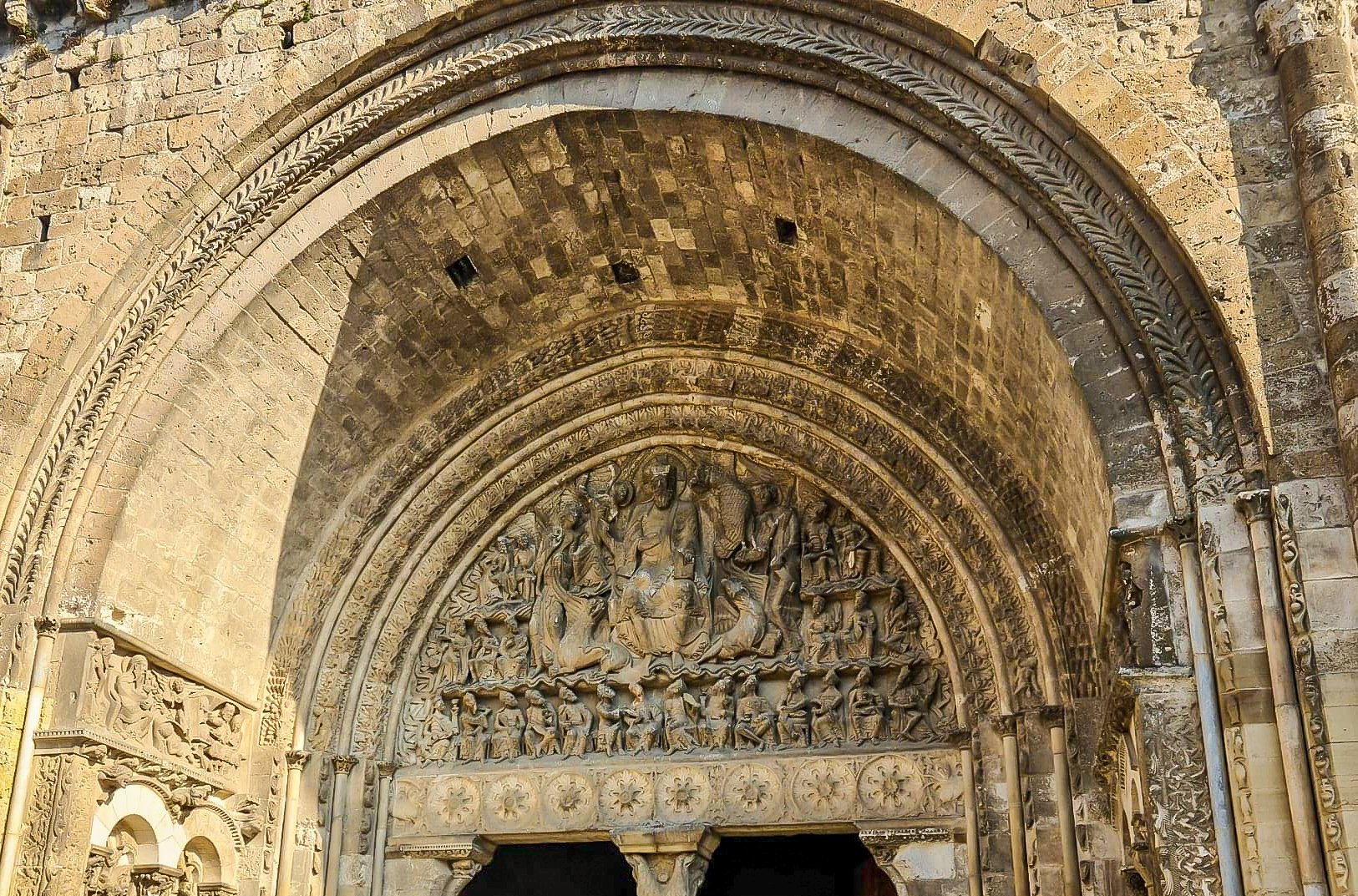 This was my second visit, so I knew the treat that lay ahead. For me, the true essence of this place lies behind the great church. It is one of the largest and best-preserved cloisters from the Romanesque period.

I was the first visitor that day. And just as the designers had intended in 1100, stepping into the covered cloister took me to a secret place, its construction effectively separating the monks’ world from others.

The perfect square with a grassy centre and vast cedar tree invited a feeling of calm and serenity. The precious moments I spent alone here felt such a privilege. This was what I saw. 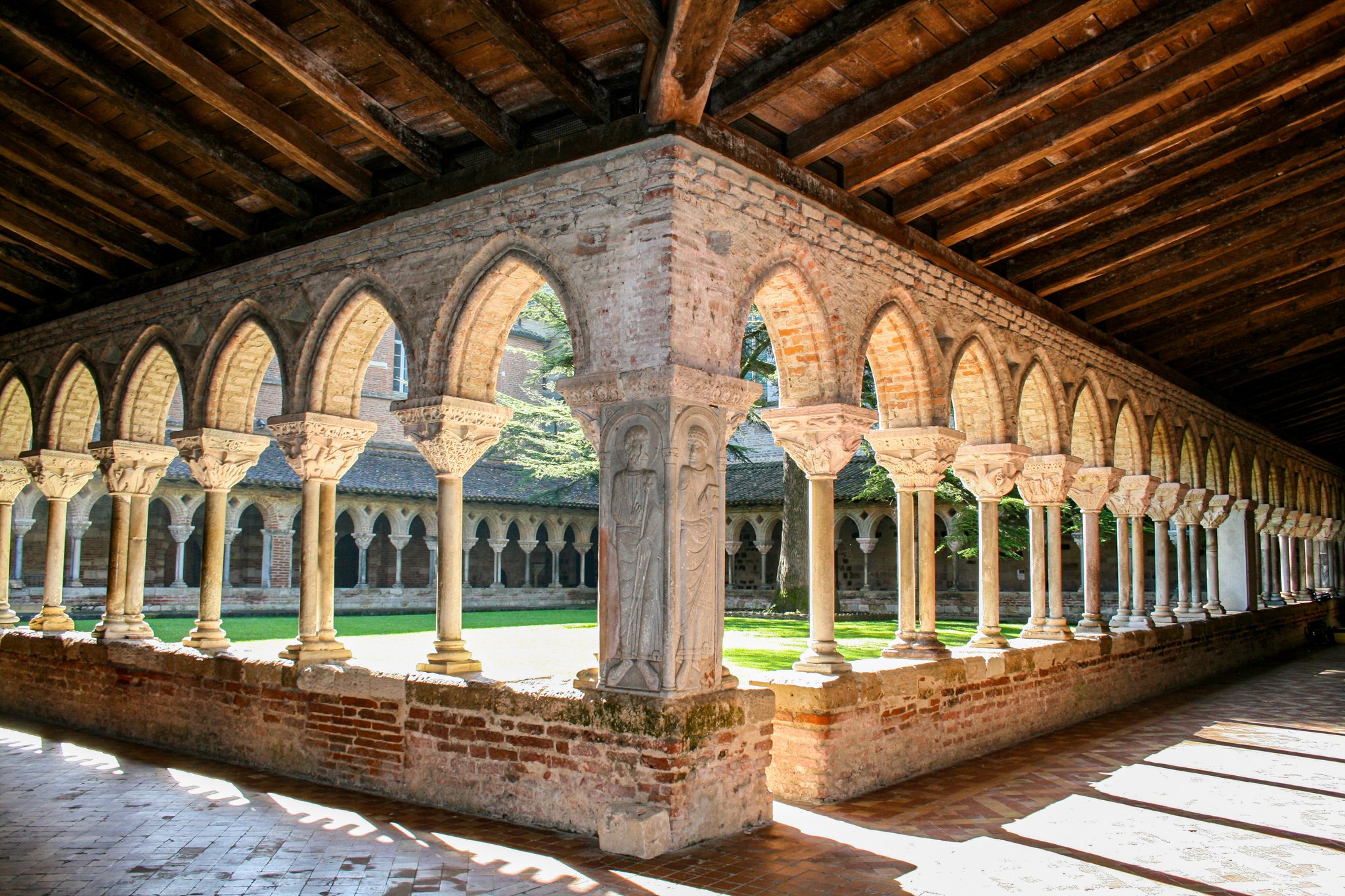 At the turn of the 12th century, around one hundred Benedictine monks lived in the monastery. I gazed at that bevelled floor, trying to imagine monks pacing, peacefully going about their business. Spellbinding. My eye was drawn to the remarkable pillars. No religious stone had been left unturned.

The creators marked the four corner pillars of the cloister with images of apostles. They function as its material and symbolic support. But there was another significance. Through the diagonal associations, imaginary lines were traced, forming an X. This was the abbreviation of the name of Christ.

Other features demanded my attention. 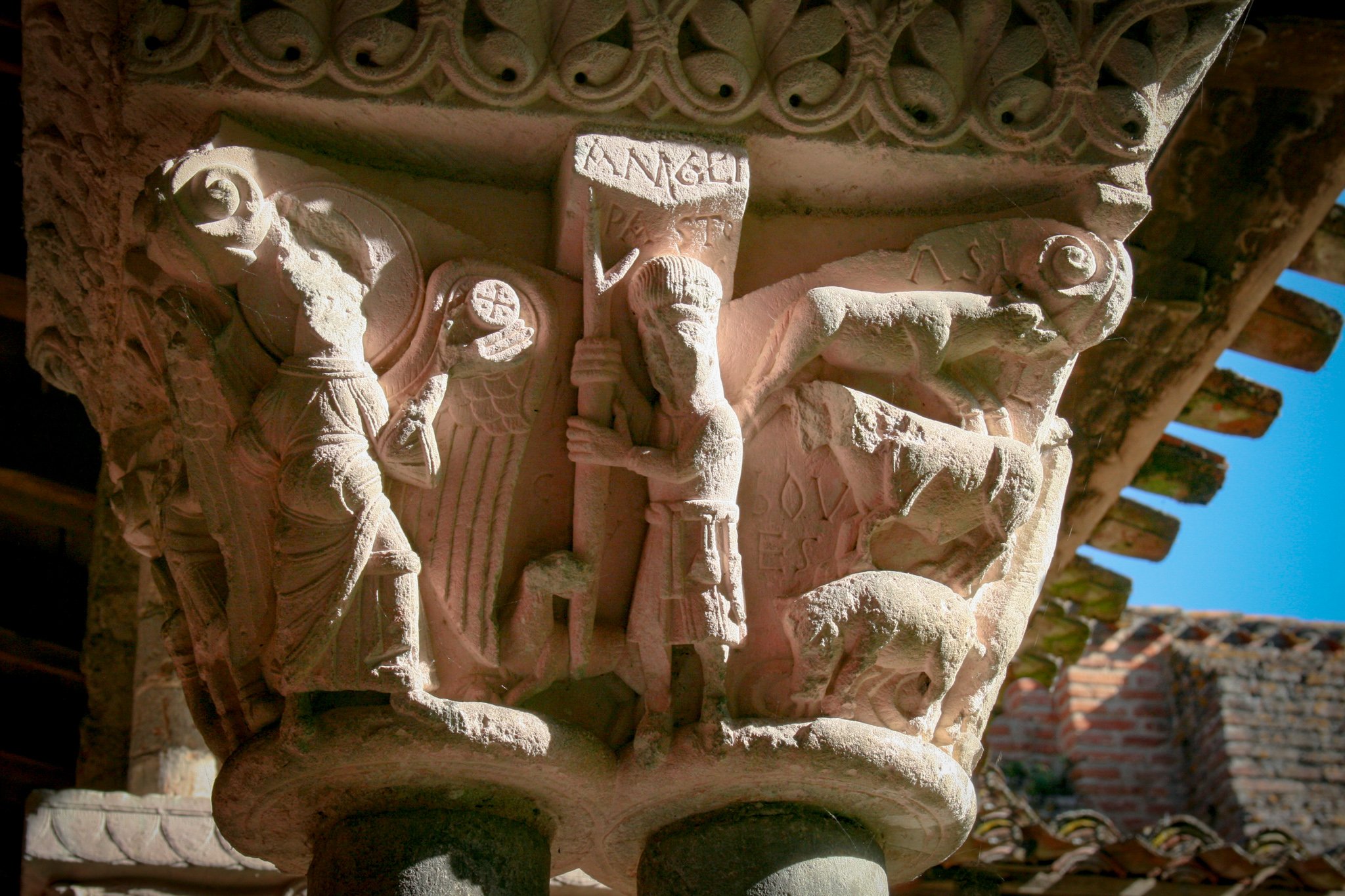 Seventy-six capitals decorate the cloister. Each has an exceptional carving that tells its own story. More than half are called historiated because their decorations depict episodes from the Bible or scenes from the Saints’ lives. 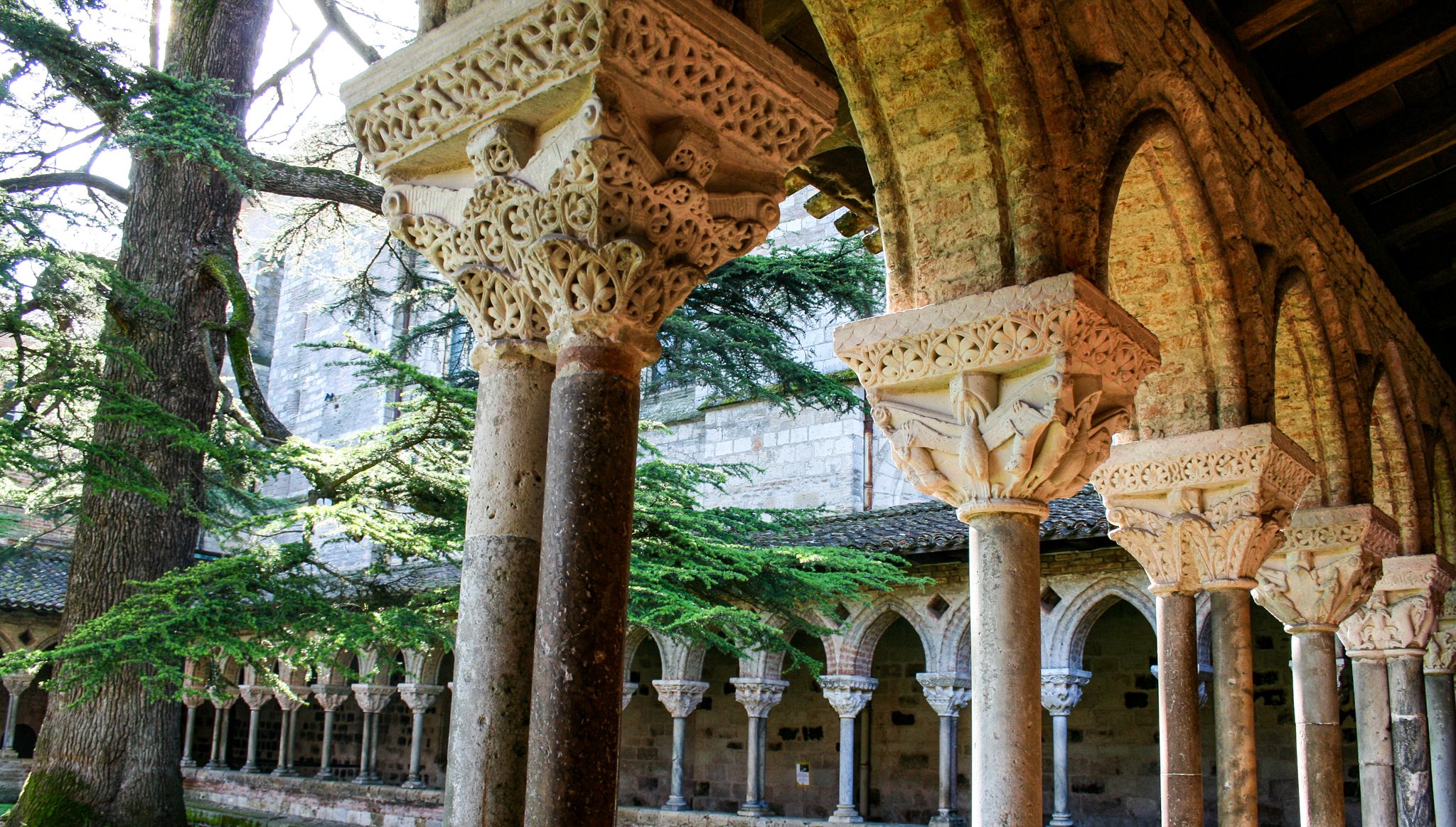 The rest are known as decoratives. These exquisite sculptures are detailed; intertwined birds, palmettes (small palm leaves), rosettes and plant foliage whose profusion and diversity contribute to the creation of harmony. The variety is dazzling.

I reached the entrance to a flight of spiral steps, which leads to the church bell tower upper hall. I remembered it from before – and gulped. Those incredibly steep steps… Still, it had to be done. 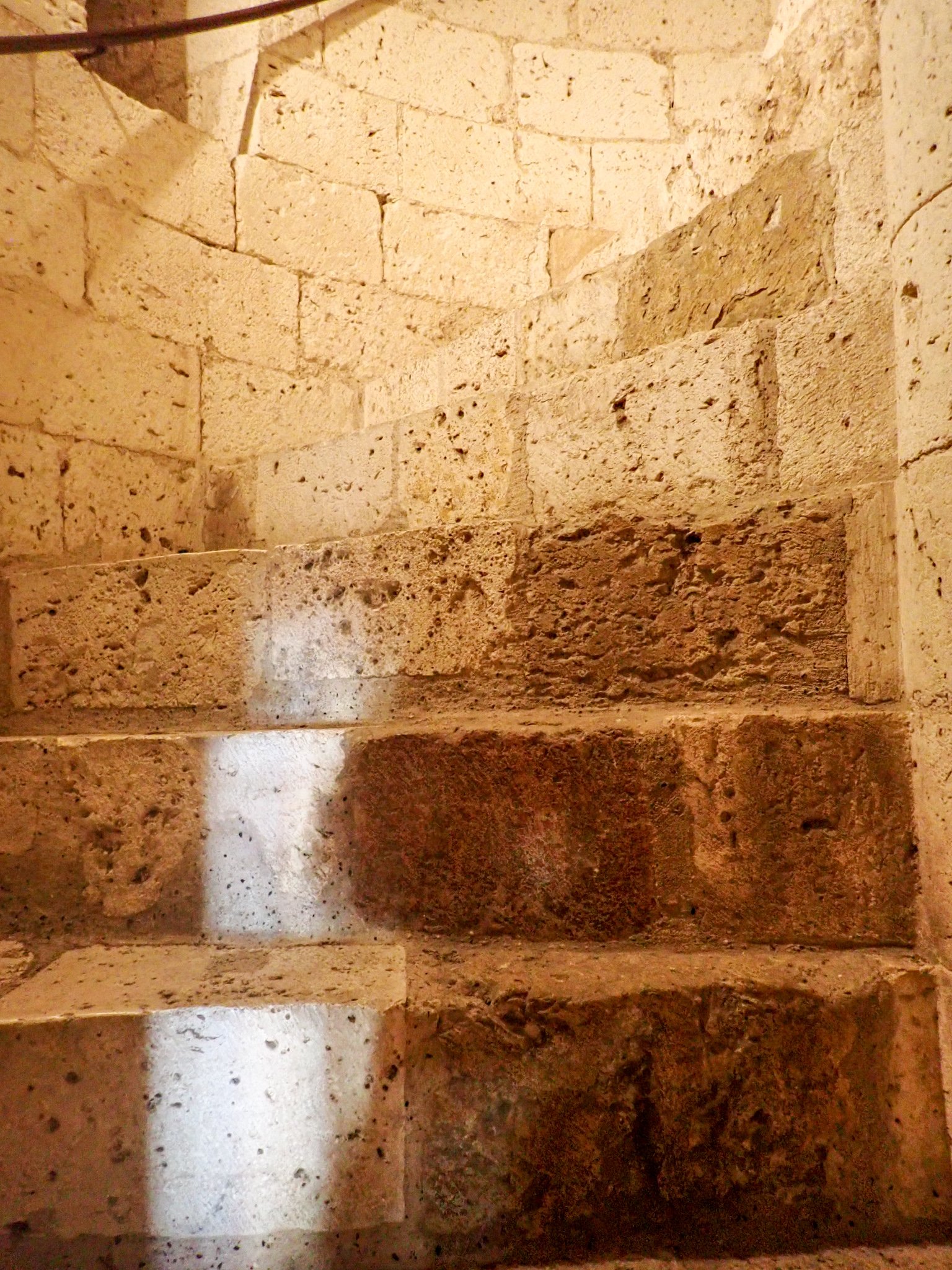 Halfway up, I paused. I had to. I’d run out of breath. It wasn’t for the first time that I briefly pondered how spritely monks must have been. A little door was offset to the left. Even attempting to enter was fraught with difficulties. There was a ledge and not much else to stop the user from plummeting down those precipitous steps. 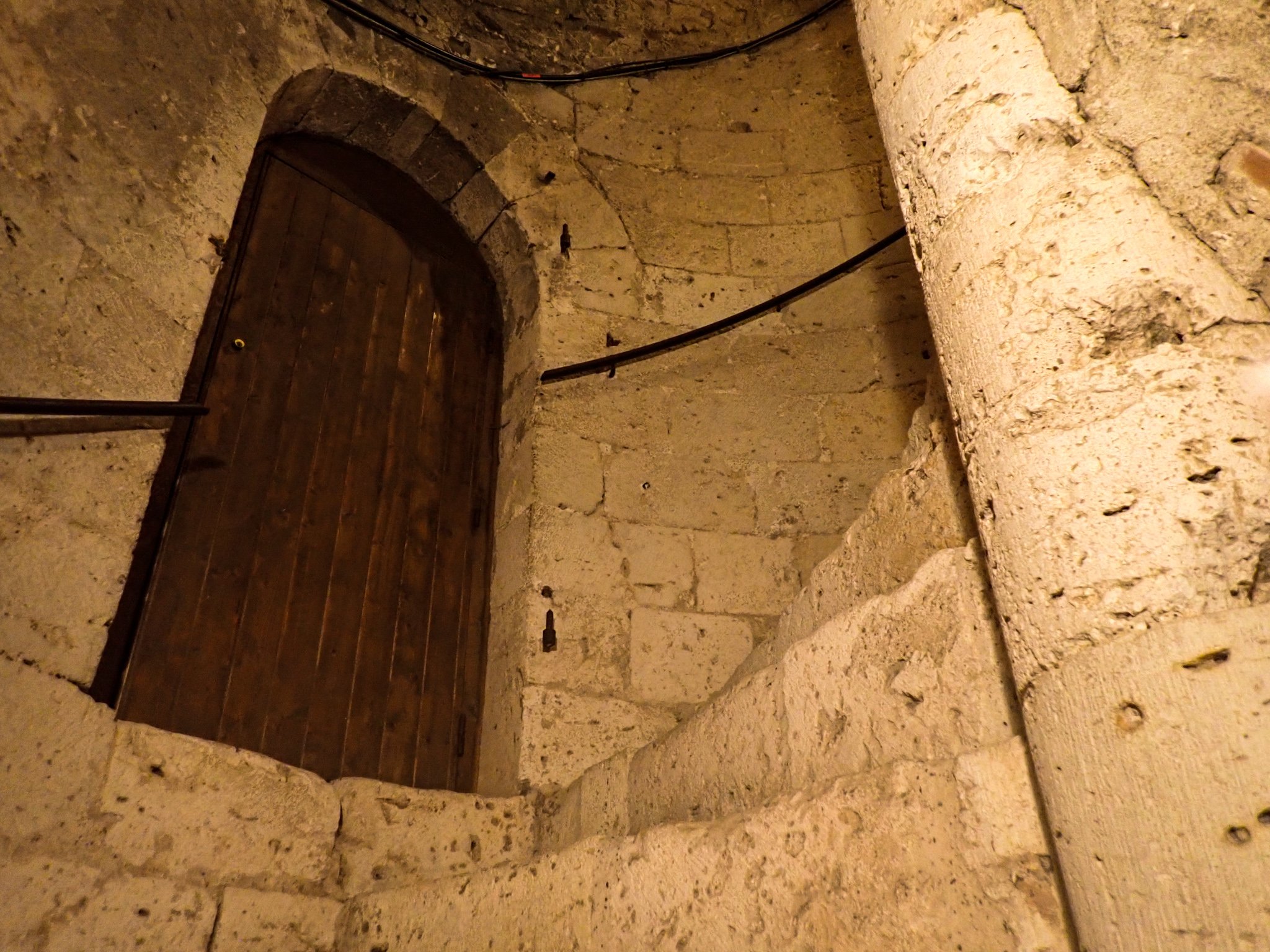 Finally, I reached the entrance to the upper hall. The steps relentlessly continue to the belfry, or so I assume. Luckily there was a padlocked gate barring entry. It’s just as well since my irritatingly adventurous spirit might have taken over. I clambered over a stony ridge into the upper hall of the church bell tower. And it is genuinely awesome. 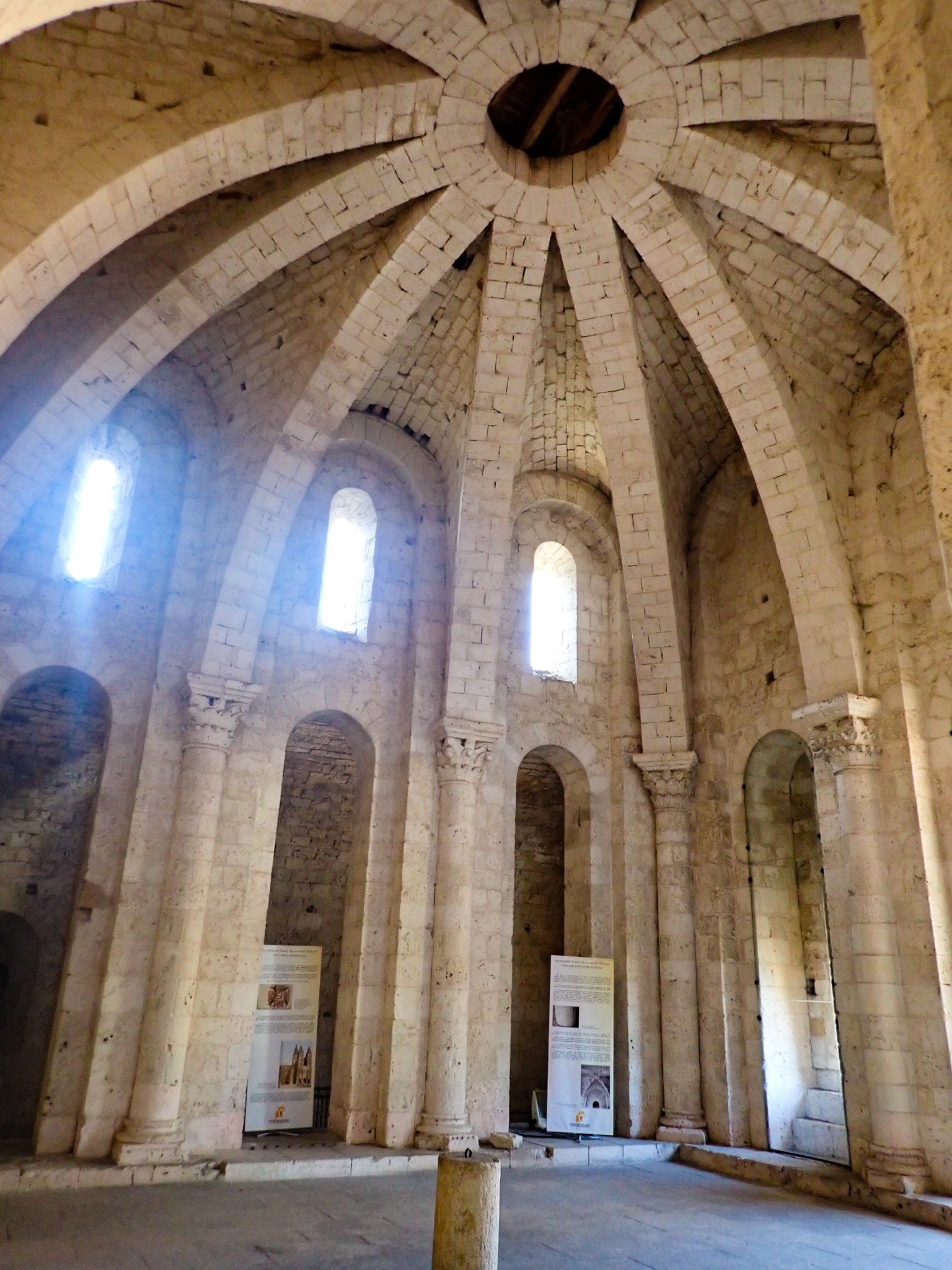 Romanesque ribbed vaults arch effortlessly around a central oculus. Clean, graceful lines. A vast bell yoke lay on the floor. Stupidly, I didn’t place anything next to it to give you a sense of perspective, but I can assure you that this thing is huge. 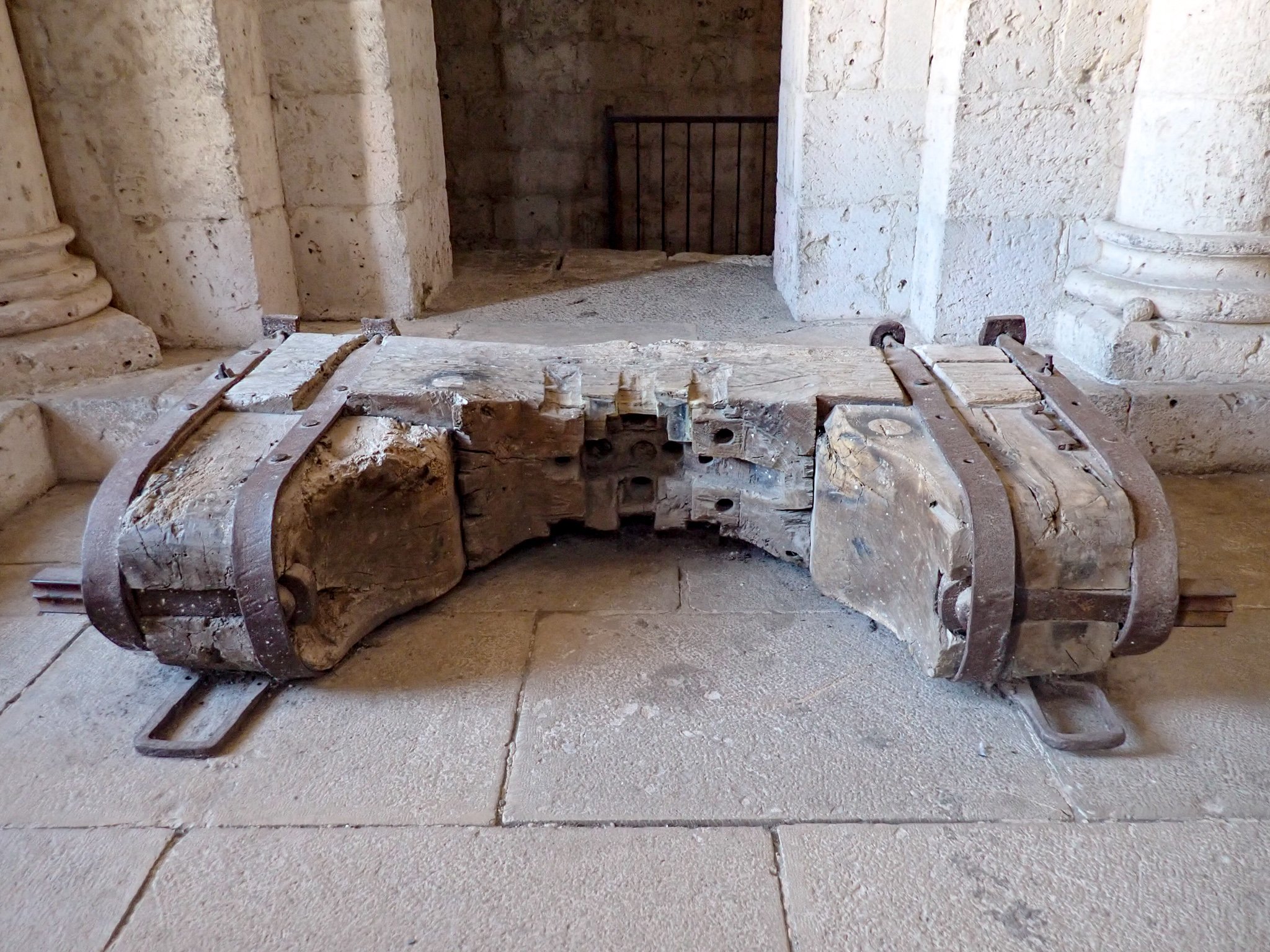 The room has twelve large windows, which fill the room with shafts of light. Some overlook the interior of the abbey church. I peeped through.

The great church, which started life in the 12th century, seemed simple and unpretentious. Yet even from my crow’s nest position, intricate details, painted walls, ornate carvings, and sculptures were easy to see. I would need to explore these another day. 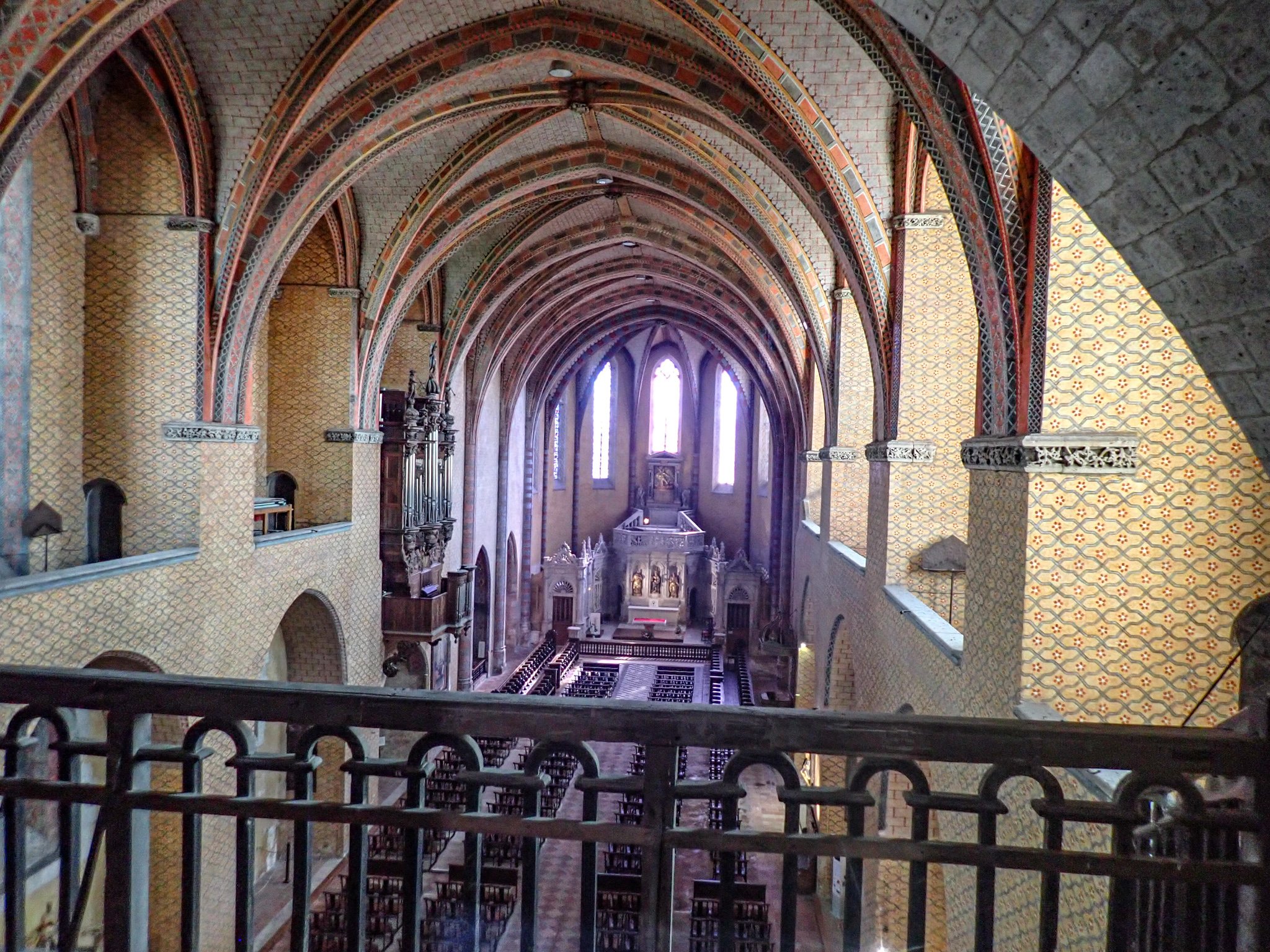 I turned back towards the spiral staircase. Not known for profound philosophising, it occurred to me that as well as being elite athletes, monks must have had minute feet. This was no place for boat-sized sandals or pointy heels. 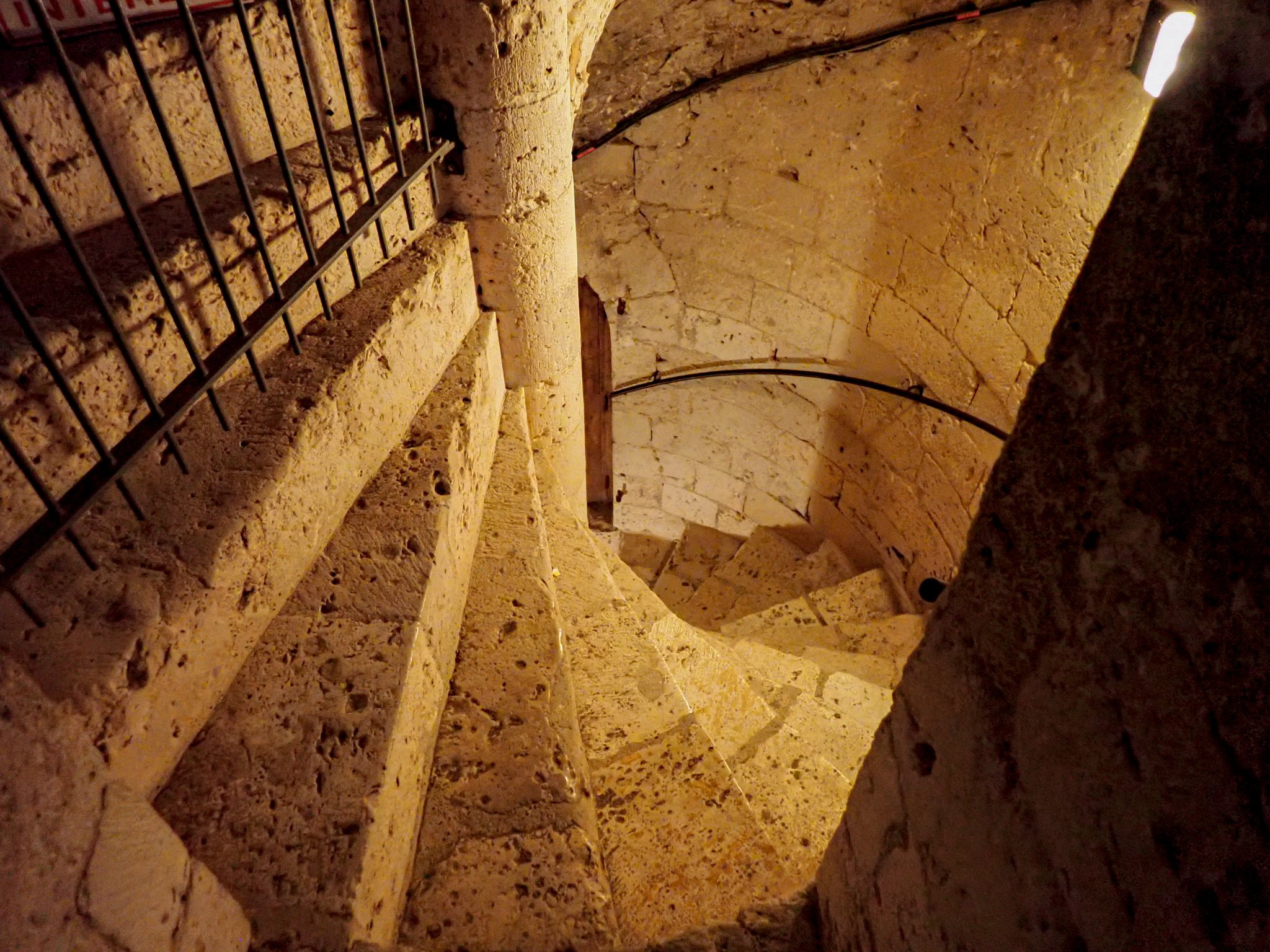 The only sounds came from my footfalls and internals as calf muscles screamed. Nevertheless, I made it back down to the quiet of the cloister. There was a door farther along the quadrangle. I placed my bag beside it to give you an idea of its size. Its use? I’m afraid I never did find out, but it was as perfect as it was tiny. 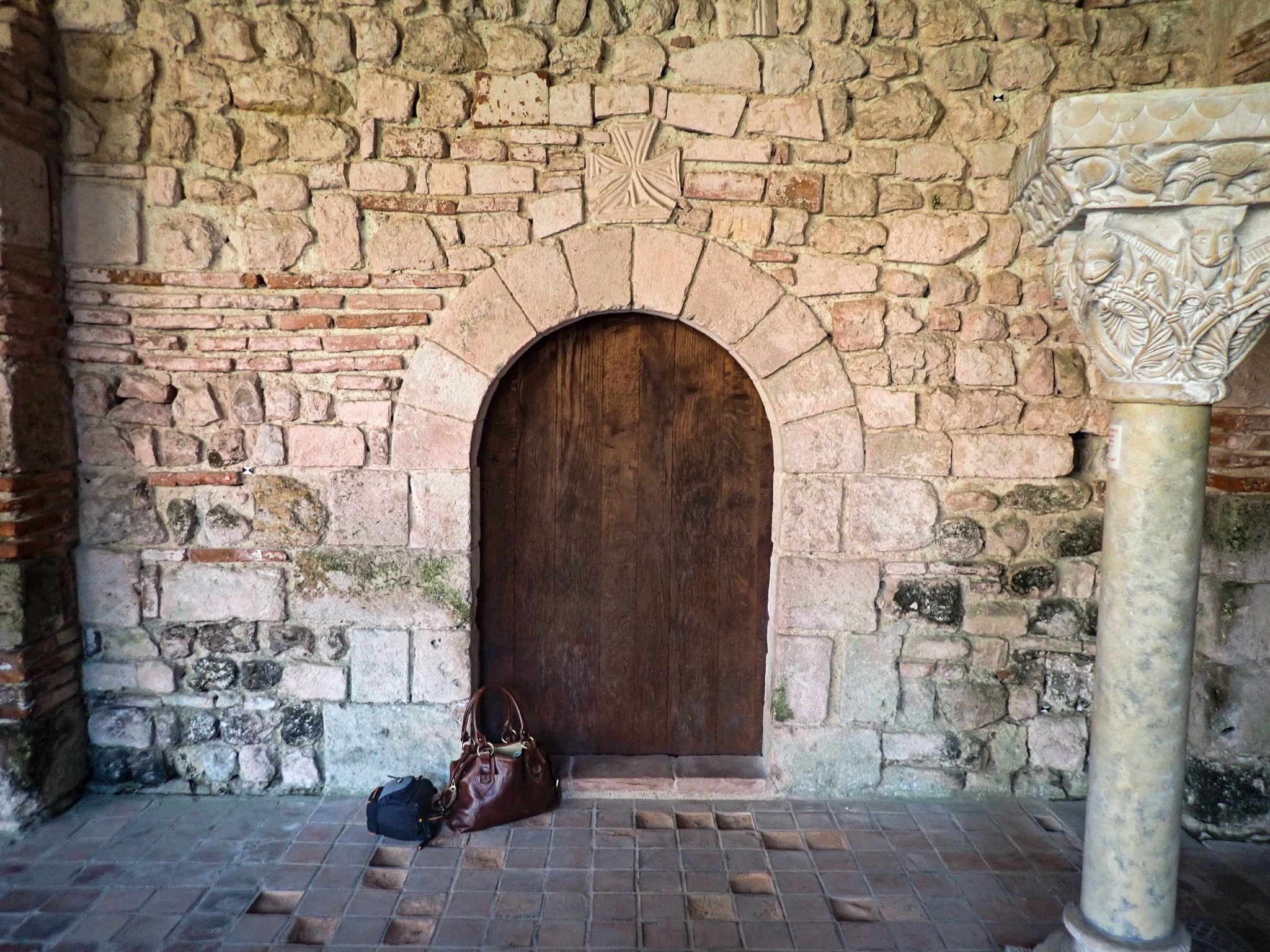 Close by was a pair of mighty oak doors with a soft, magnificent surrounding. This may have led to the dormitories, which I believe will be opened to the public in the future. I’ll certainly return when that happens. 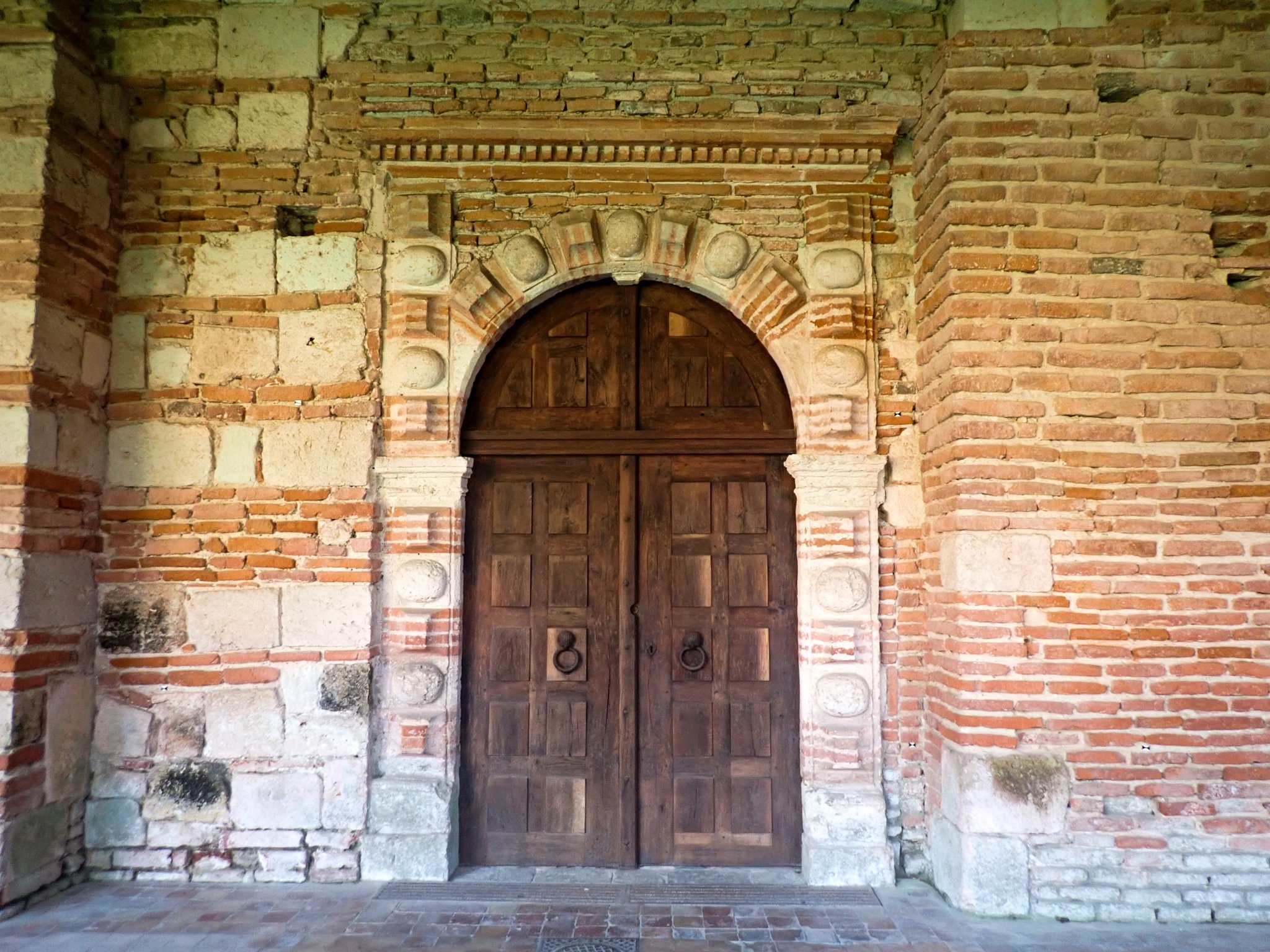 An inner chapel was adjacent. With its continuity of simple architectural lines, this private sanctuary felt somehow very special. The reddish stone offers inherent warmth. I understood why this might be a favoured place for contemplation. Today, it houses exhibits. Ancient masonry and capitals preserved from ecclesiastical buildings. They hold a fascination for those with or without religious beliefs. 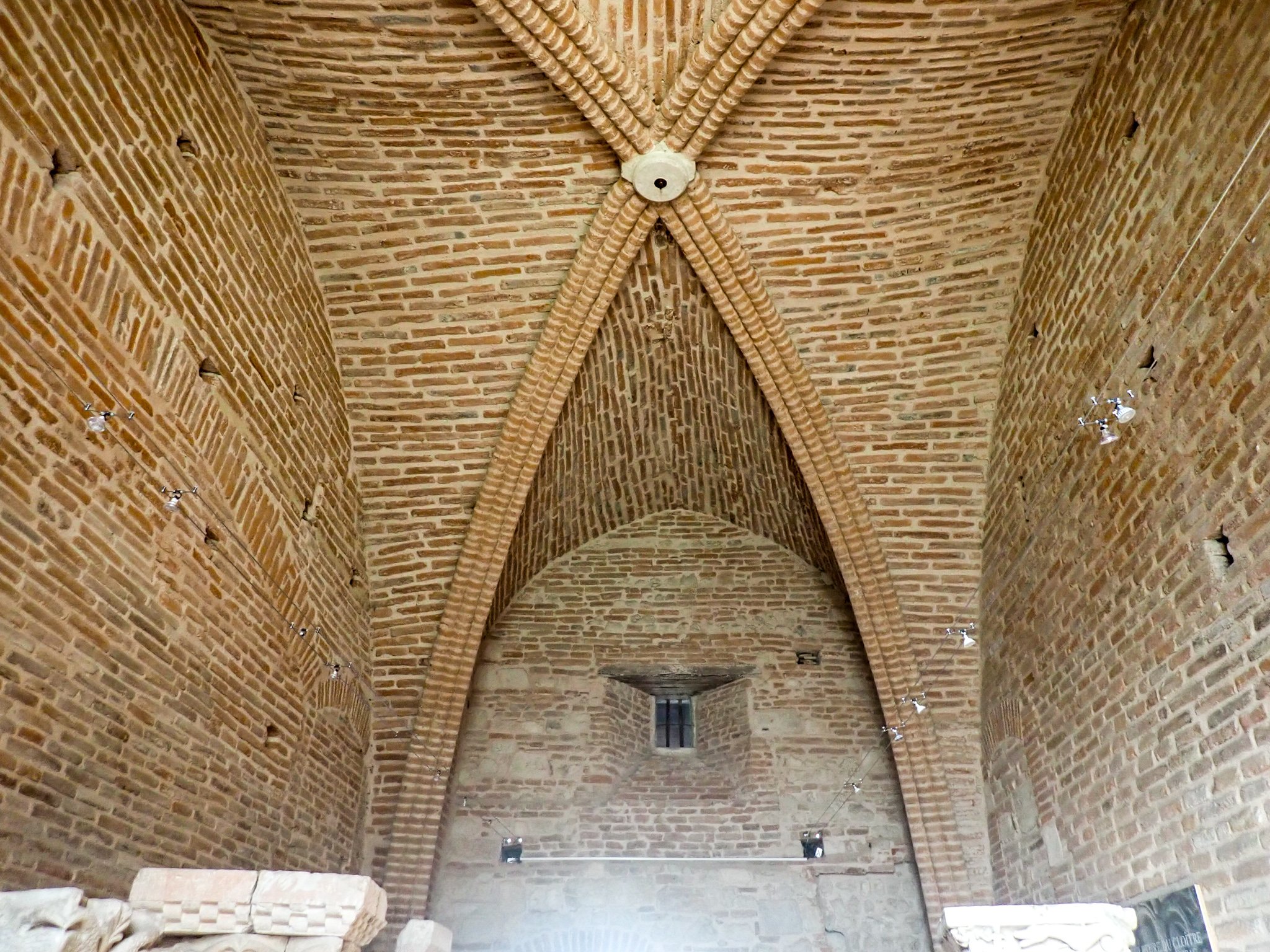 The Benedictine monks spent much of their time praying. There were eight services held each day, which set the tempo of their lifestyle. They were also expected to work. The monks made their parchments, inks and paints. The scriptorium was where scribes copied religious and profane texts, around 120 manuscripts produced here are now preserved in the French National Library. 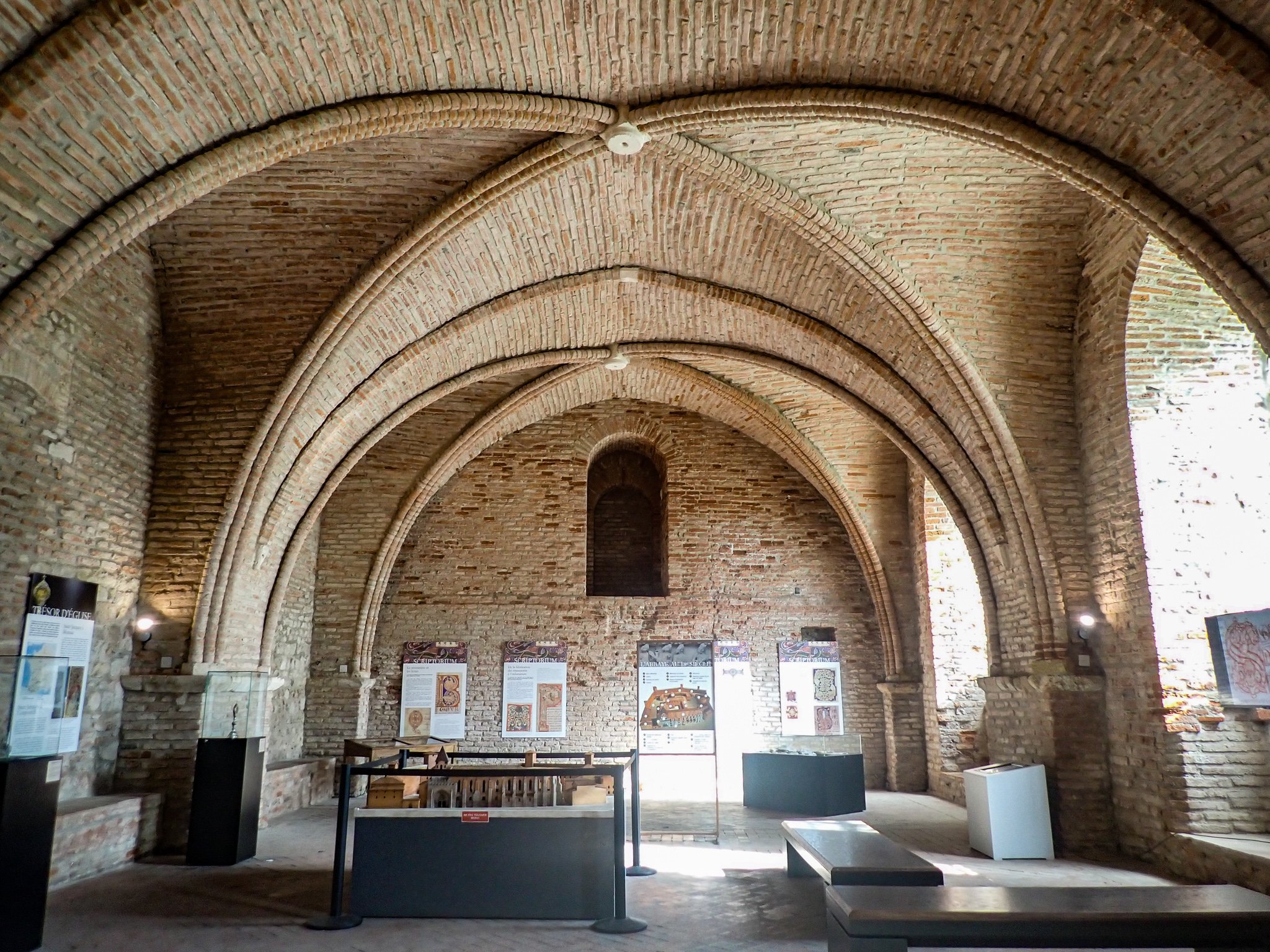 Gregorian chants gently filtered around the room as I examined the abbey site model. I tried to visualise what it would have been like during its halcyon days – guessing what profundities and hardships the monks endured. Benedictines make three vows: stability, fidelity to the monastic way of life, and obedience. With poverty and chastity implied, their lives were modest and disciplined. 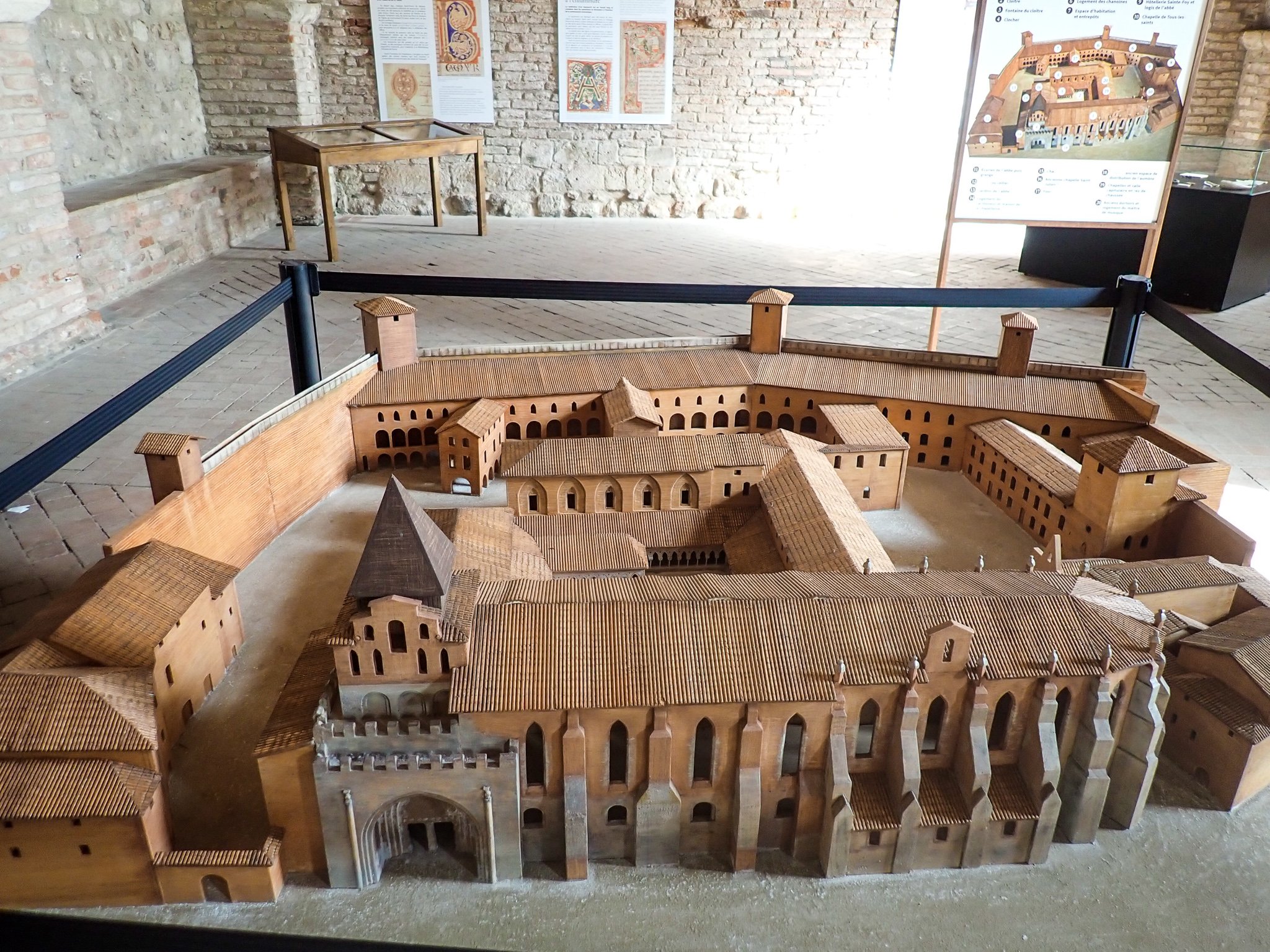 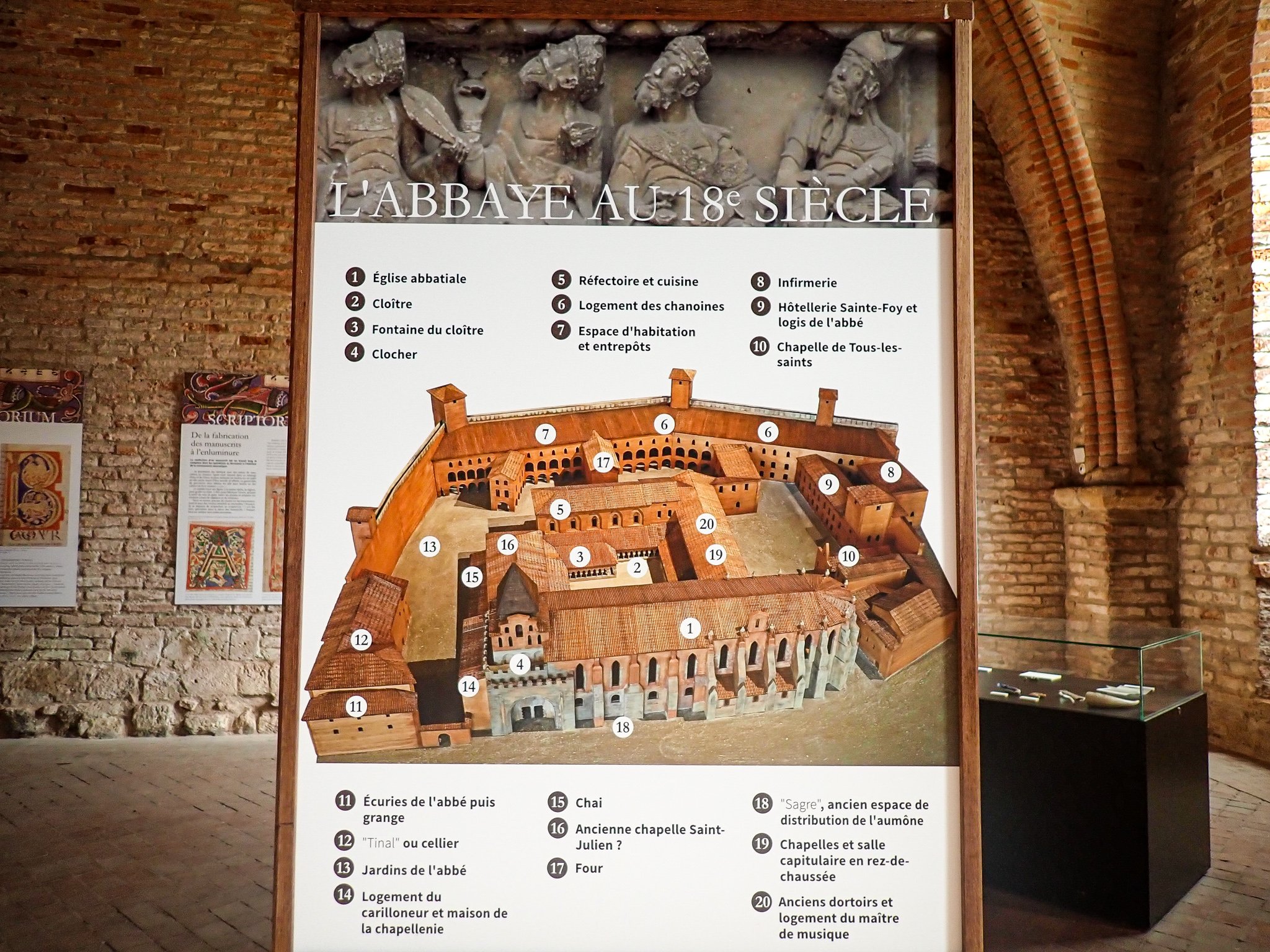 From here, monks went into the community to help the needy, and during the Middle Ages, travellers were welcomed. One of the Santiago de Compostela routes runs through Moissac. It wouldn’t be too much of a stretch to guess that many pilgrims stayed here. 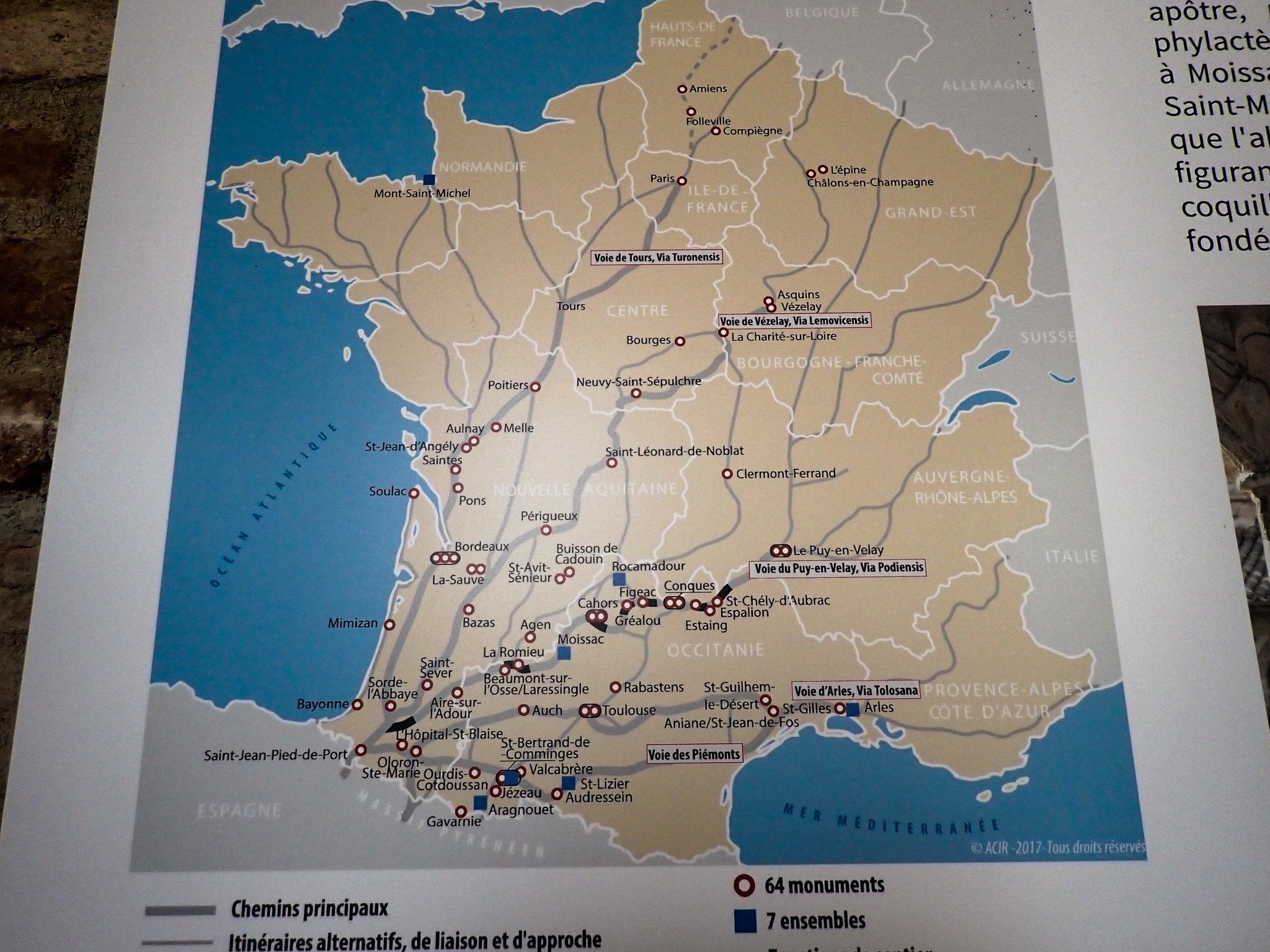 I returned to the cloister and stole another look at the immense tree. Since it is impossible to gauge its true size, I later checked online and found this link. Similar to its surroundings, it is a truly exceptional feature.

With my visit all but over, I paused for a moment to reflect. It’s that sort of place. Moissac Abbey is now a UNESCO site, and I’m so glad, it deserves to be preserved. I stepped back into the clamour of modern life. Actually, no, it was still early, so peaceful here too. I glanced back at that hidden fragment of ancient life. My glimpse of its rich history had been breathtaking.