Foggy cloaks shrouded trees and lay like fat clouds on meadows. The weather may have been intriguingly mysterious, but after weeks of murk, the novelty waned. The many grey, rainy days that followed marked our winter months. We had frosts, yes, but few. So when the skies finally cleared, the transformation was breathtaking. 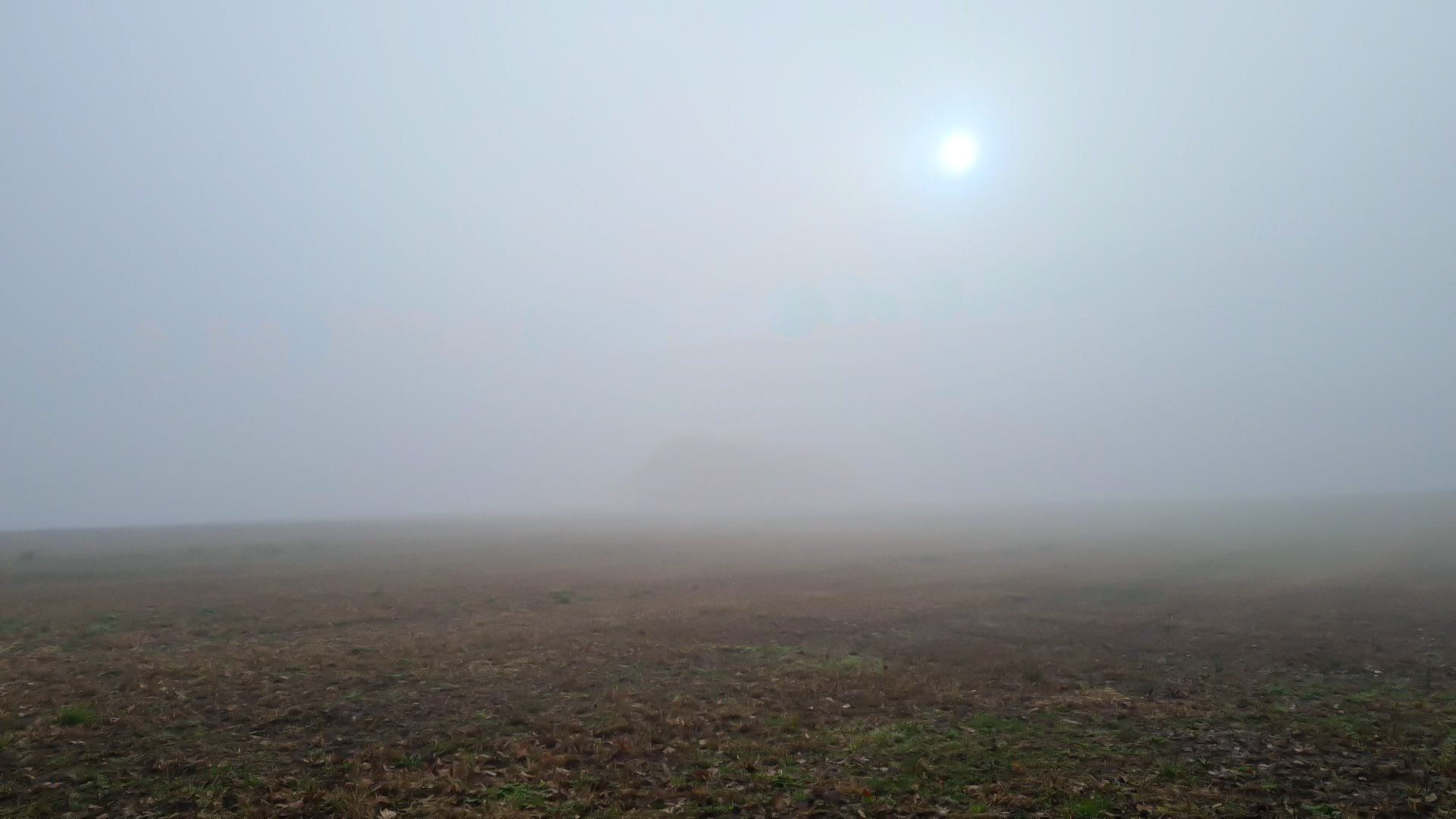 There’s nothing like a clear day to energise the spirits. As the sun shone, our garden transformed into a feast of colours. Up popped daffs with crocuses nudging their knees, and baby blossoms started showing on our hawthorn bushes. Their natural enthusiasm inspired me to take the dogs on a hike through the orchards. 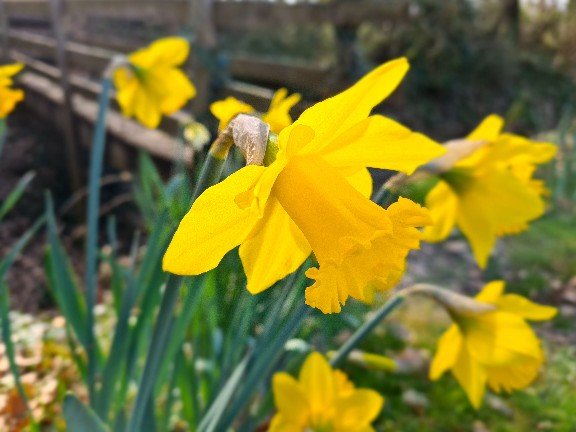 A privilege of living in our rural area is the peace. We might come across workers cutting back apple trees at this time of year or pass a farmer preparing his fields for the forthcoming season. But that’s about it, which is perfect for wildlife observations. Or should be. 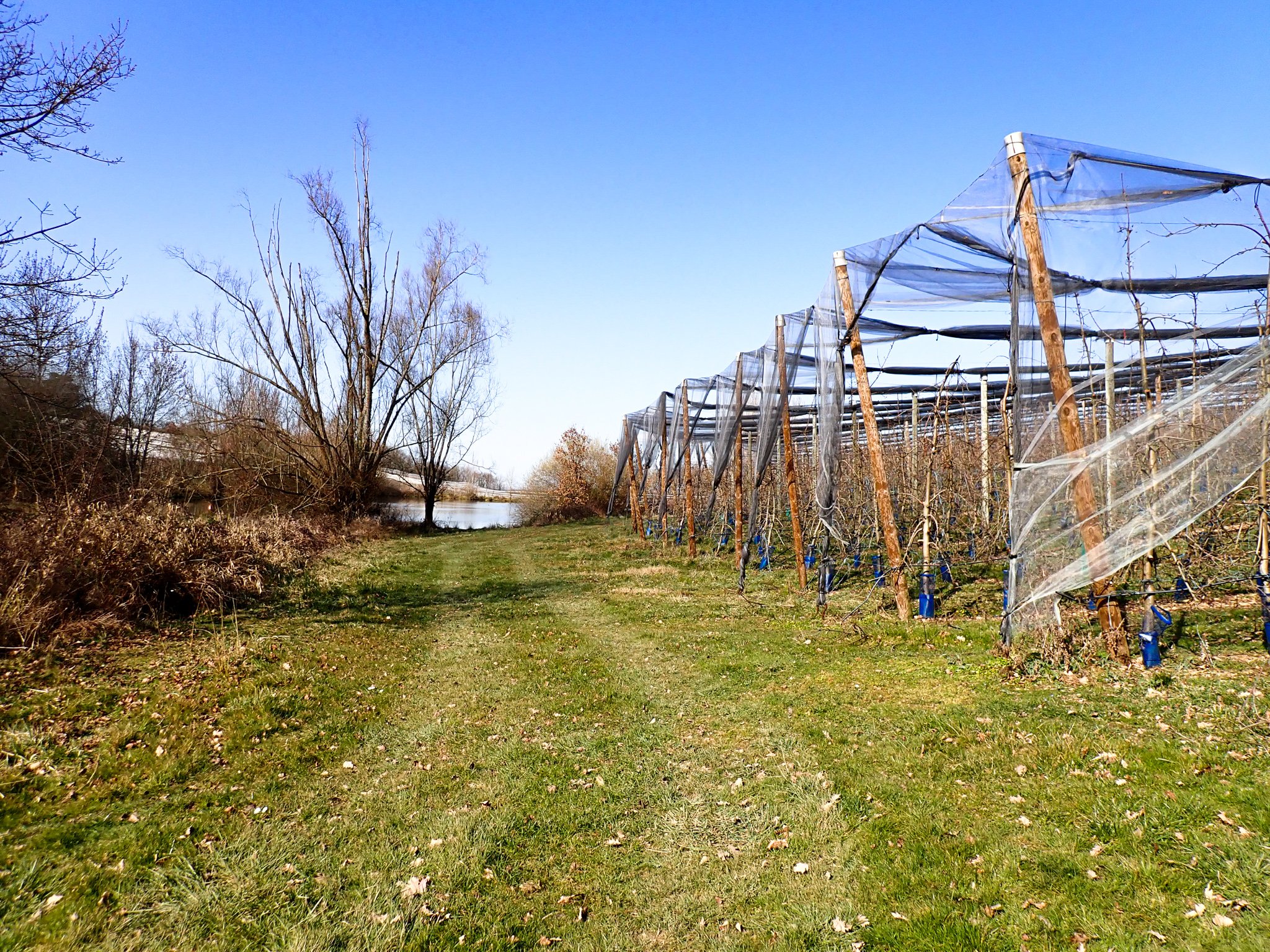 Aby and Max, our two Australian Shepherds, love any old trek. They don’t care where it is or what time, just so long as they can stretch their legs every day. And whenever the opportunity presents itself, they’ll bound ahead in search of water. They love a wallow. Adore our pooches though I do, their ebullient behaviour often puts the kibosh on a stealthy wildlife spotting session. 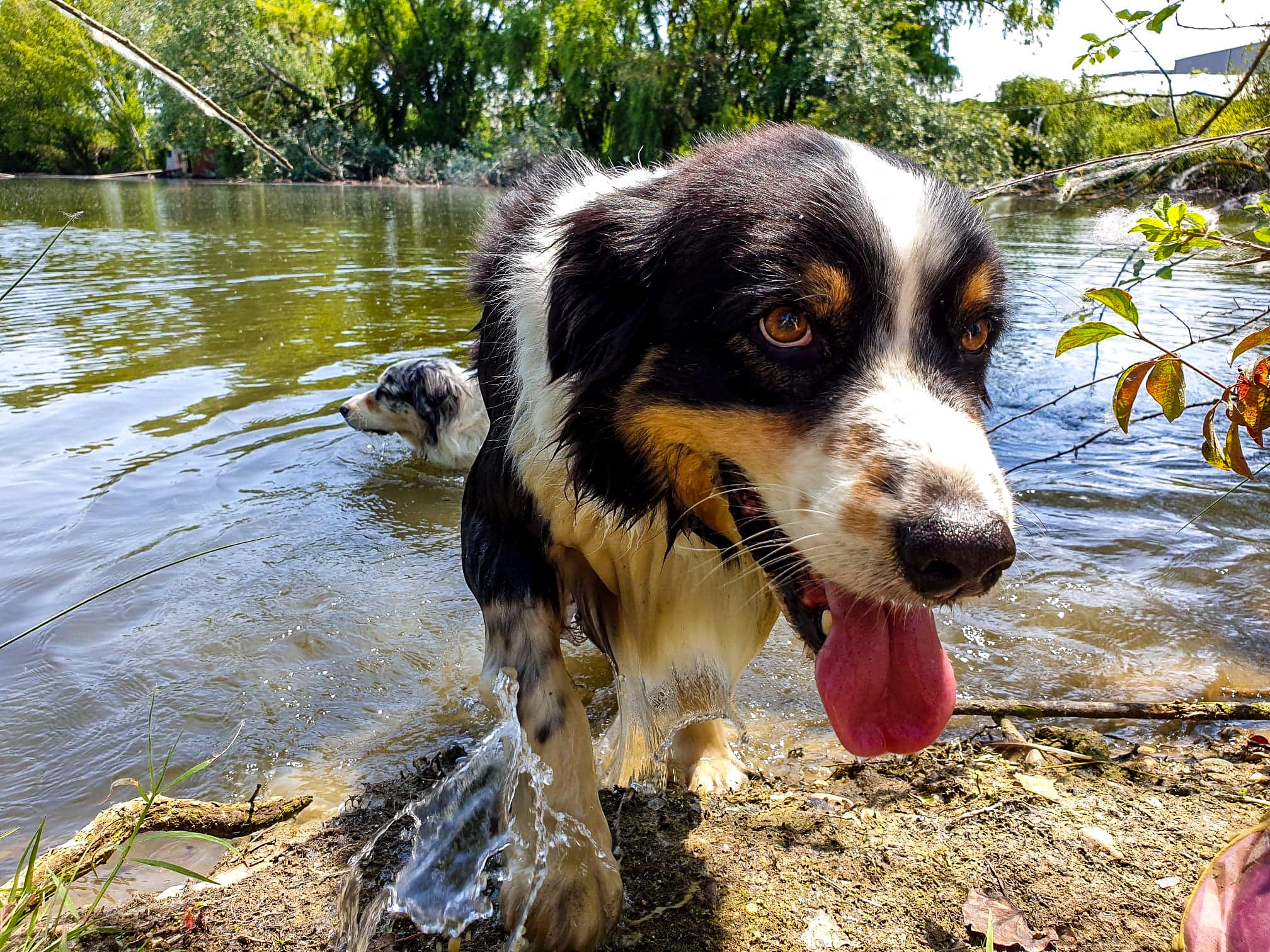 Despite their watery blunders, we still glimpsed lots of different species. Max, fascinated by frogspawn in a muddy furrow, wasn’t sure whether to paw the wobbly mass or treat it as a snack. Fortunately, he was distracted by a leaping frog before deciding. Indecision, it’s a thing with Max. 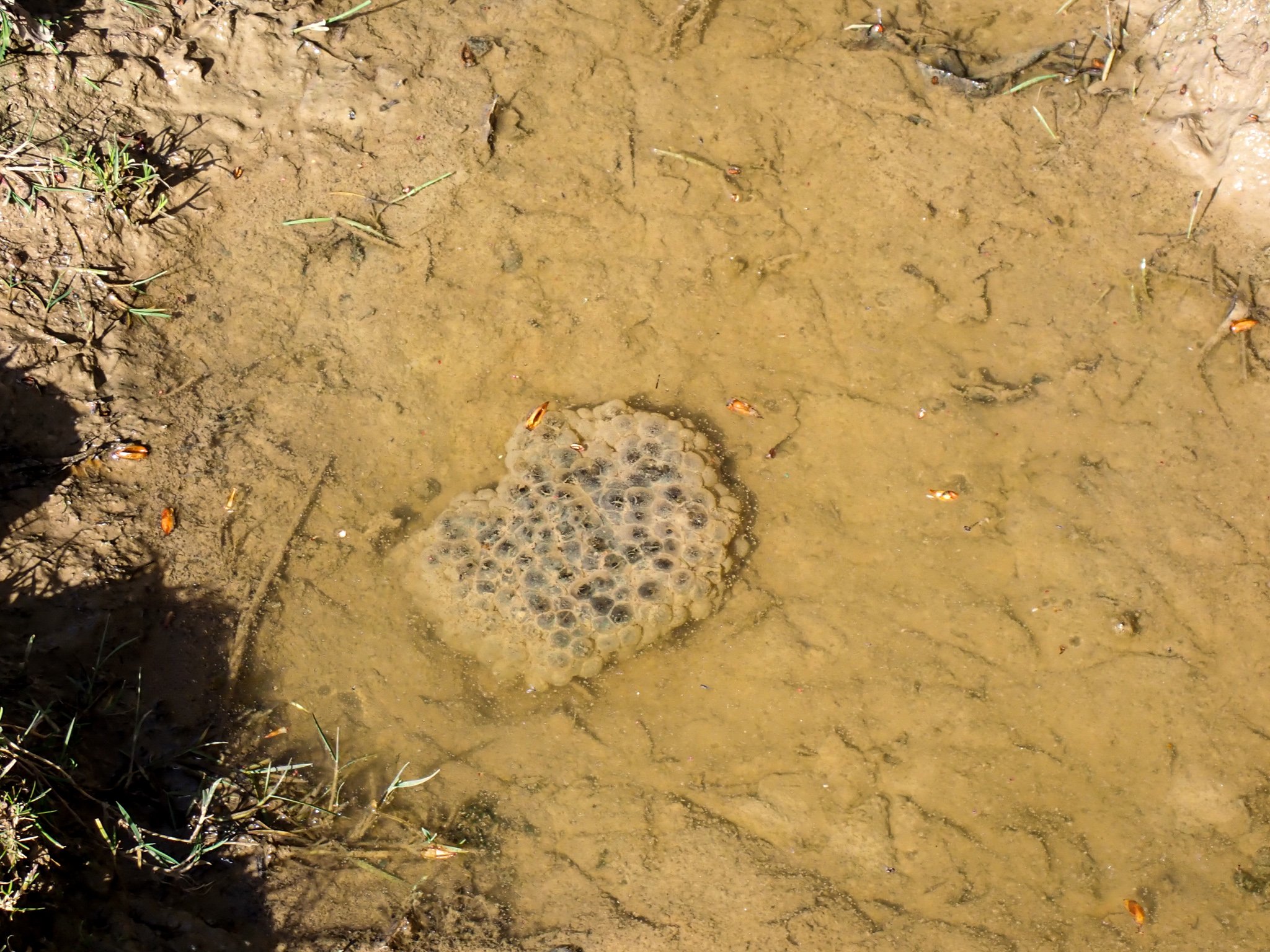 Adult ragondin (coypu/natura) broke from the banks and swam, mooing their warnings, a respectful distance across the reservoir. That could only mean one thing. There were babies about. Several little ones popped up only to scatter, searching for safe havens in the reeds. We moved on quickly so as not to scare them. Moorhens, egrets, grey herons, and ducks. The water was alive with life. 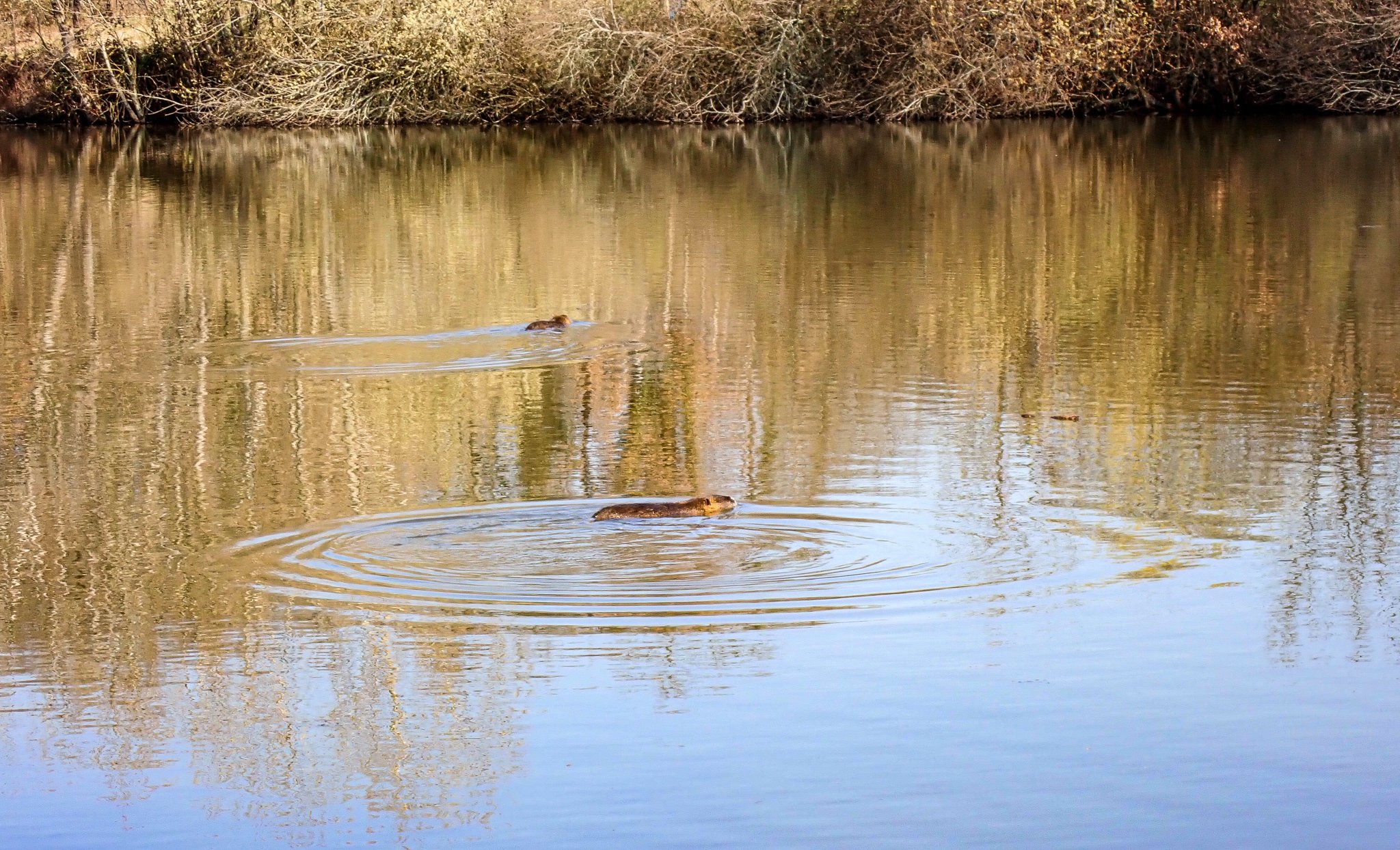 Ambling among the rows and rows of pristine apple trees was bliss. There’s something inexplicably satisfying about these plants. Despite their apparent uniformity, each is unique, and they all look incredibly healthy. Buds are forming, but it’s a bit early for them yet. Here is where we often spot deer, hare and sometimes foxes. It’s a treat. 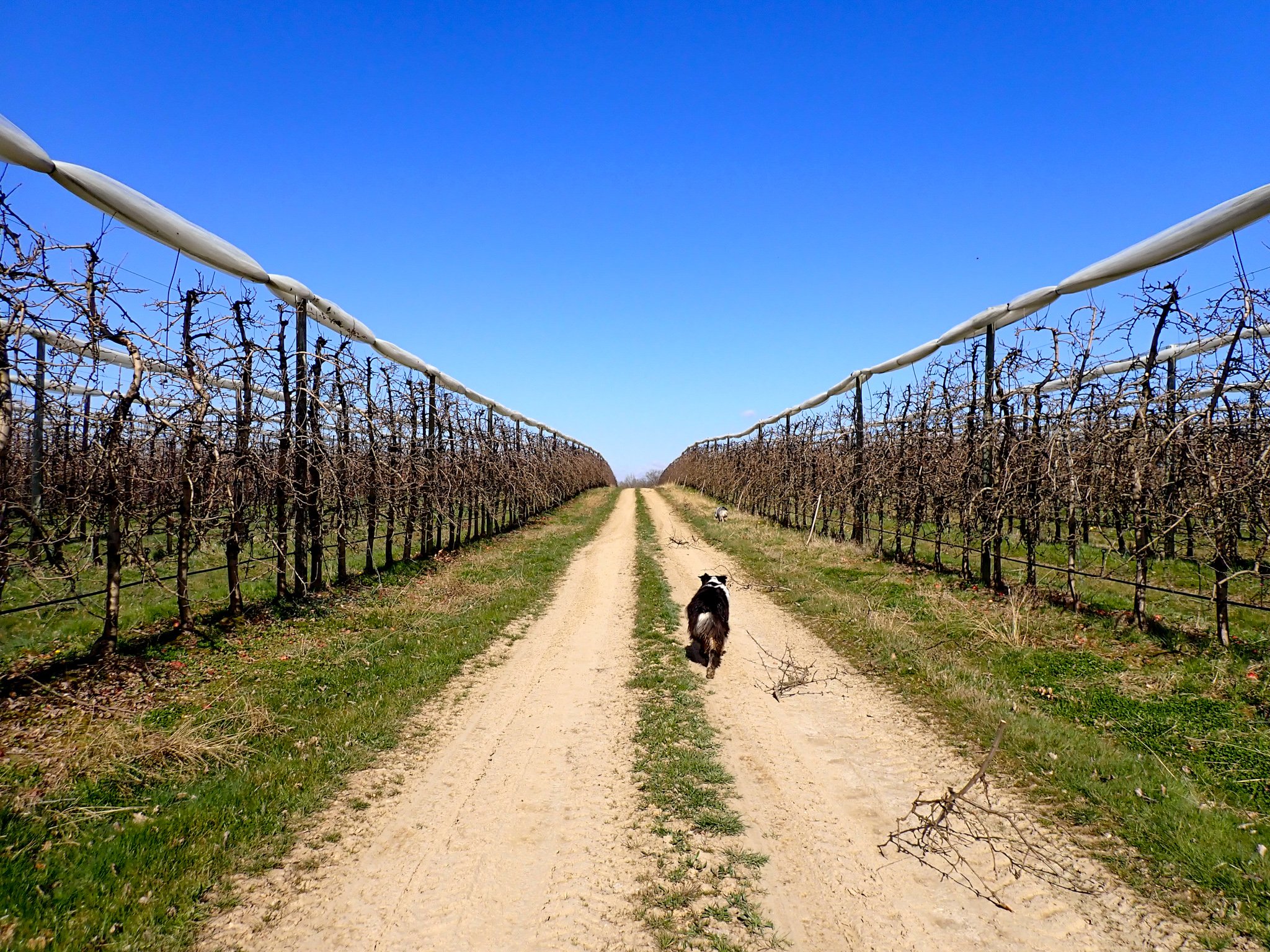 Since the sun promised to shine all week, Nathalie, my dog walking pal, and I decided to have a ramble through the orchards close to her home. It was an excellent opportunity to give her aptly named Beagle youngster, Sun, an obedience lesson. Now nine months old, I took this pic when she was a baby. As you can see, she is unbelieveably adorable and appropriately naughty! 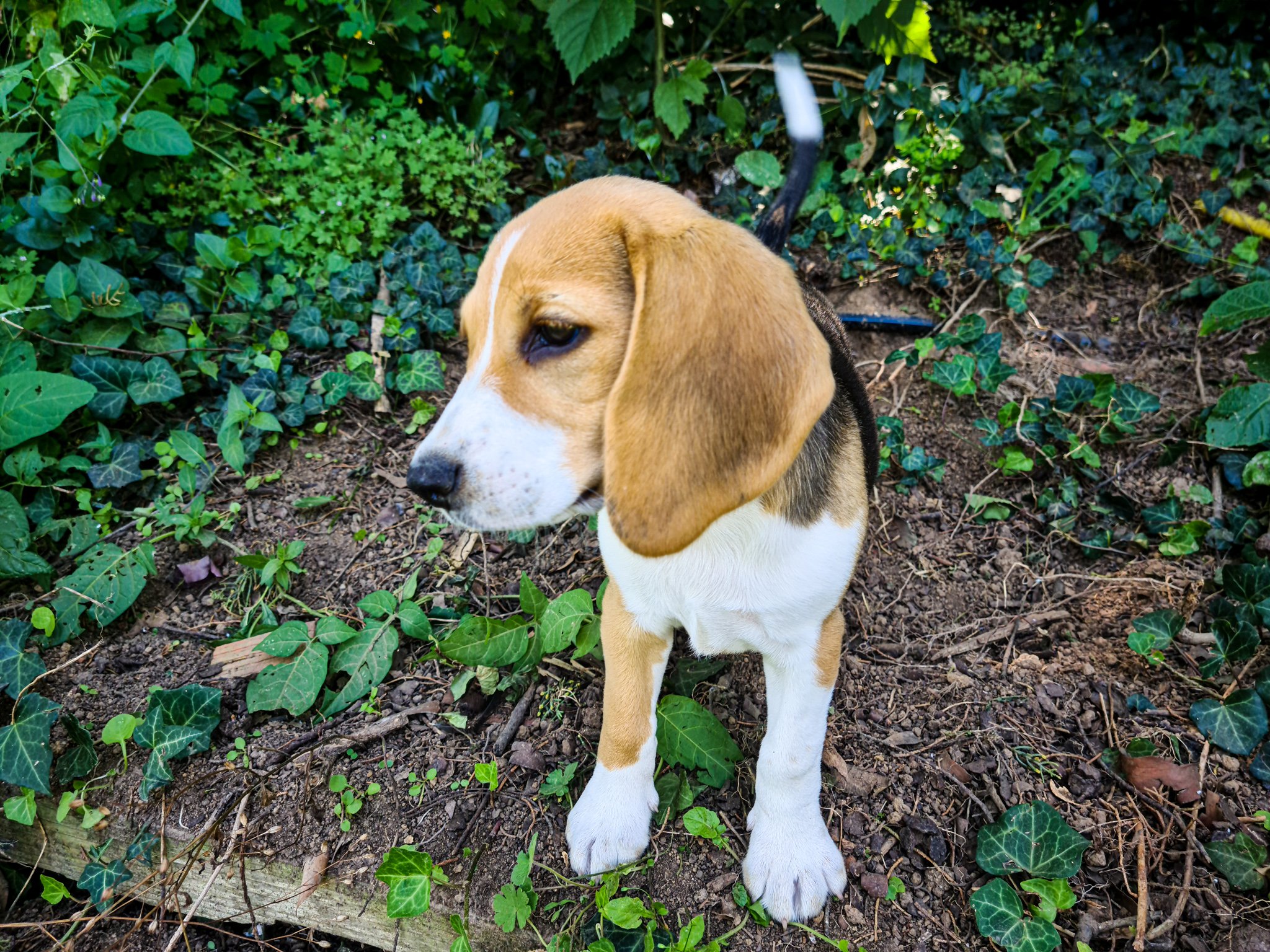 We set off, chattering nonstop, as usual, instantly forgetting worthy thoughts about dog training. Instead, we basked in the ingredients of a perfect walk: dogs playing, endless orchard tracks, blue skies, stunning scenes and that precious tranquillity.

“Whaaat? Nathalie, the hunters must be here somewhere.”

“But they’re not supposed to hunt in the orchards.”

“Don’t worry, Beth, it sounds as though they’re parallel, they won’t come near us.”

“Uh oh. I can hear hounds too. They probably aren’t close, still, let’s not take any chances.”

As we turned to backtrack, a beaten-up old white van roared down the track towards us.

The orchard owner was in no mood for small talk. Following our directions, he skidded off in a cloud of dust towards the melee.

Still more or less in the middle of the enormous orchard, we reached higher ground.

“What are you looking at?”

“See that dot on the horizon? It’s a big boar galloping towards the west side. It’s a long way away.”

“Ha, bravo! I know hunting is part of our French culture, still, I hope it escapes. Ah, and I see the hunters are after it now.”

“He’s too far away now. They’ll never find him.”

Nathalie was right. Cars were streaming down the orchard’s arterial track in fruitless pursuit of their prey. Aby, Max and Sun stared, bewildered by the fracas. We called them and started walking in the opposite direction, which proved not to be our best idea. 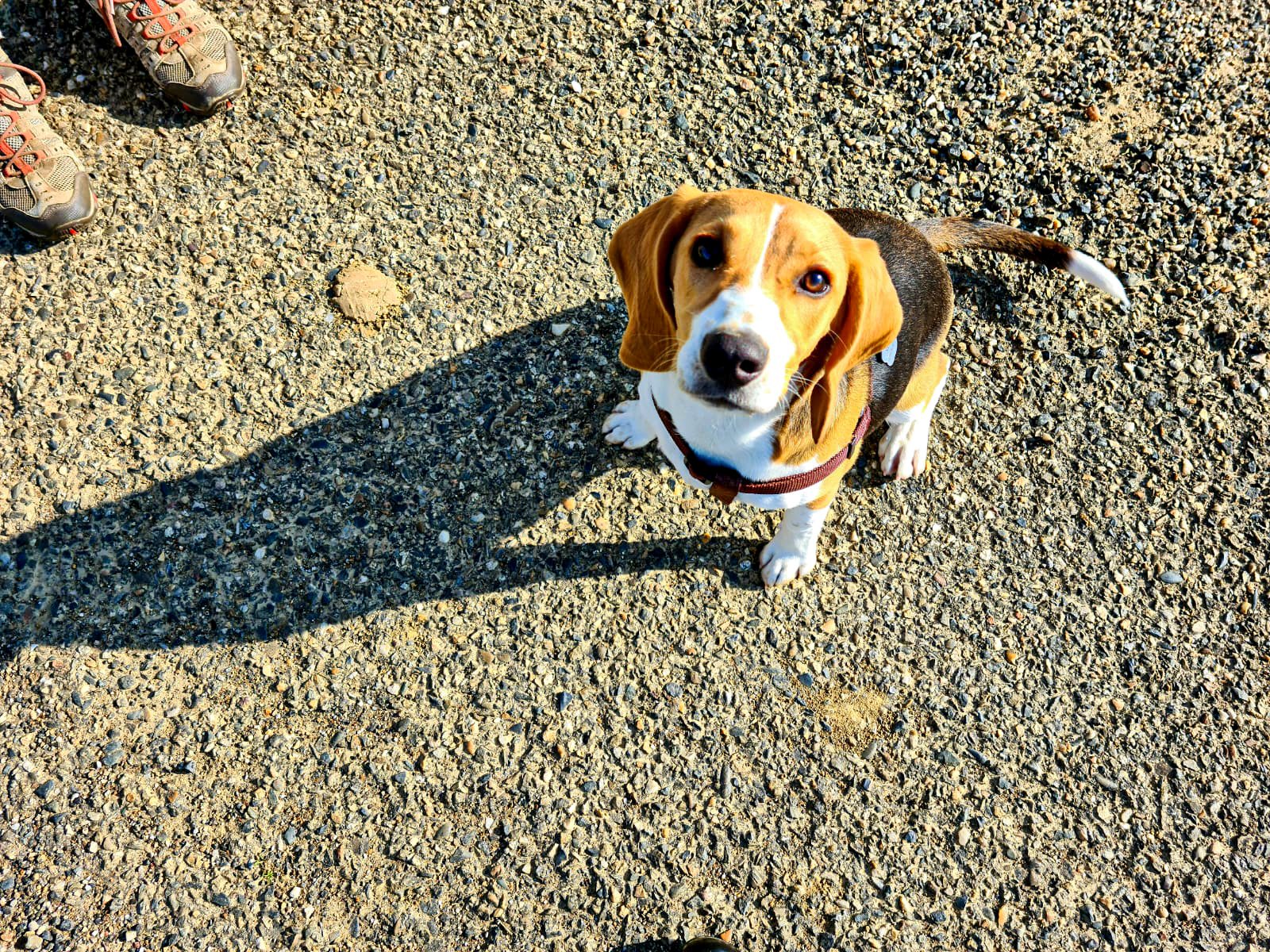 The fruit trees came alive with mournful clangs. These were the unmistakable sounds of hunting dog collar bells. Woofs, yips, howls filled the air as hounds milled around close-by, trying to pick up the scent. Unfortunately, their clamour generated an extreme reaction.

It was Sun’s first close encounter with hunting dogs. And being a hunting-ish variety herself, she was finding the whole situation thrilling. With all obedience training conveniently forgotten, pup Sun started bawling her head off.

“Great starter howl she has there, Nathalie!”

“Ooh, I’ve never heard her do that before. Suuuuuun come! Hush!”

Nope, Sun wasn’t remotely interested in heeding her mistress. This might have been fine as the hunters had disappeared, but we now faced a different challenge.

“Ahem, Nathalie, the hounds have changed direction. They’re coming towards us.”

“Ah, yes. Poof! [A great and oft-used French word.] This is extraordinary.”

A feature of these hounds is that they ‘sing’ when a scent is snuffled. It’s the signal to their mates that game animal tracks have been found. This causes the pack to stop casting around and join in. Sun, hollering her head off, was evidently giving off messages that she was onto something good.

Half impressed at her pup’s ability to alert an entire pack of seasoned canine hunters onto an imaginary scent, Nathalie started chuckling.

“Well, well. I wonder how many there are?”

As we tried to count them, more hounds appeared between trees, along tracks and over the rise. Aby, who would rather paint her toenails than join a pack of mangy howlers, stuck to my side like glue. Max, on the other hand, decided to become a big brave lad and have a go at protecting us.

Basically, Max is far too nice and soppy for that sort of behaviour. In any case, it was unnecessary. Hounds are totally single-minded, especially on a hunt. I have never seen displays of aggressive behaviour. This was lost on Max. 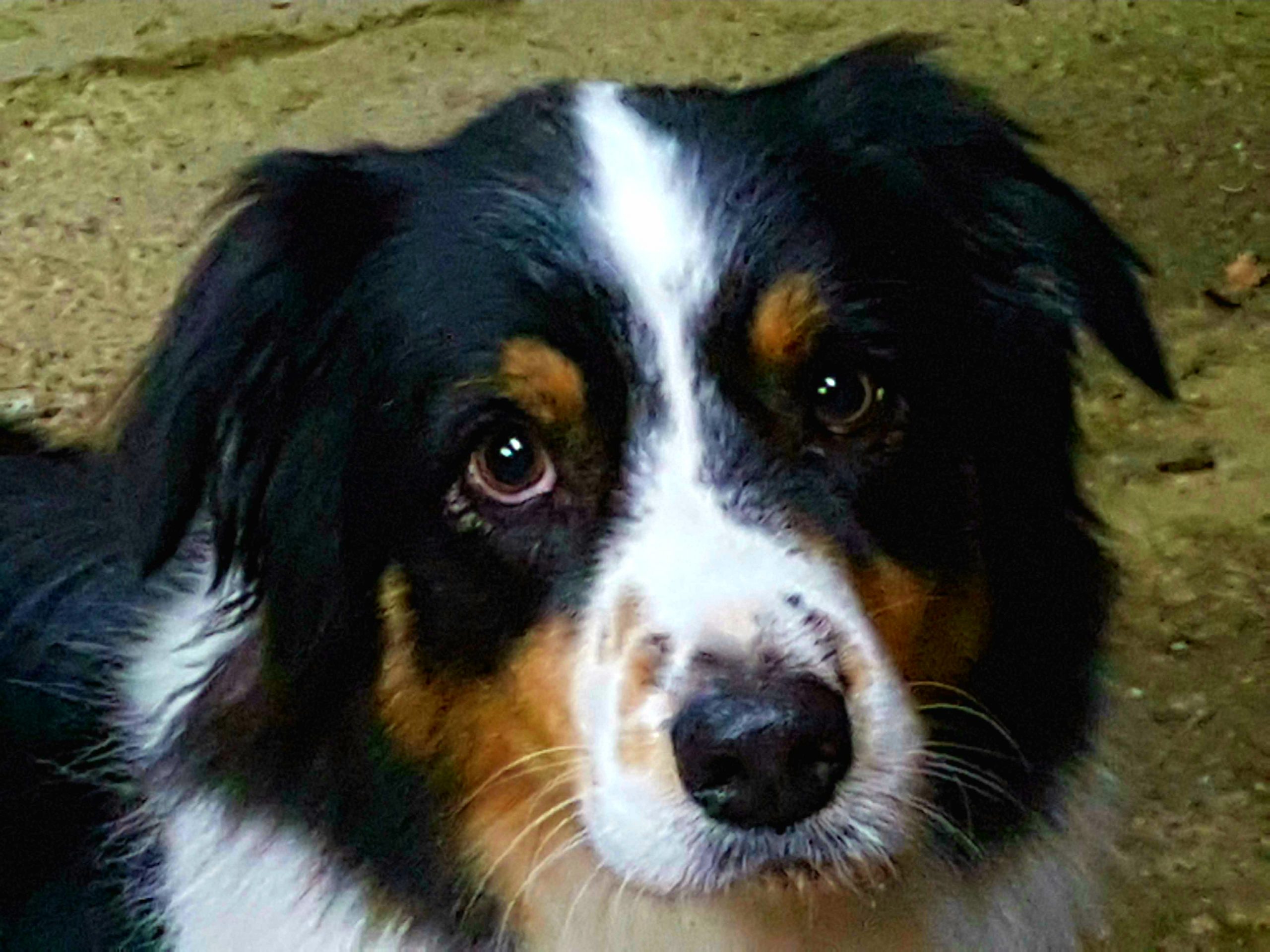 As hounds milled among us, Nathalie tried/failed to calm her hopelessly excited Sun while I tried/failed to stop Max’s valiant efforts. Bless him, rather than take a chunk out of one, he tried a nifty barging tactic, which failed miserably.

Max bounced off the dog and toppled sideways into one of the deep irrigation ditches that line these orchards. Looking suitably embarrassed, he scrambled out and resumed his volley of shepherding dog barks, which, let’s face it, aren’t nearly as impressive as a hunting dog’s boom.

Once the hounds realised Sun was full of hot air, they streamed back into the trees to resume their futile chase. Heaving a sigh of relief, we watched them go. There was a fighting chance that we might continue our promised tranquil walk, but there was always a risk that the boar might change direction again.

“What do you want to do, Nathalie? Try a different area?”

“I know. Let’s take the dogs for a swim instead.”

(I took a video that will show you part of the event, which you can see by clicking on the link below. As you’ll hear, Sun has a healthy pair of lungs!)

As a postscript to this episode, I can confirm that the boar got clean away. It’s often the case here, although on this occasion, it may have been little Sun and Max who scuppered their efforts. Strange. For such a quiet, sleepy place, there always seems to be something going on in our corner of France!