So what’s been occurring in our parts over the past few weeks? Lots, actually. 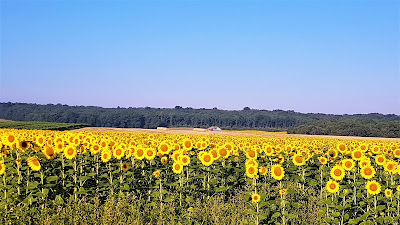 The forest is wide awake and bursting with vigour. Apples and grapes are taking form in the orchards and vineyards, and sunflowers are starting to beam in the meadows. Then there’s the wildlife. Young animals, born just this season are playing trampoline on freshly cut grass or tag among the trees. The summer is a blissful time of year for us humans too. 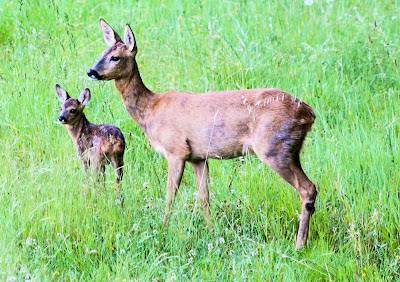 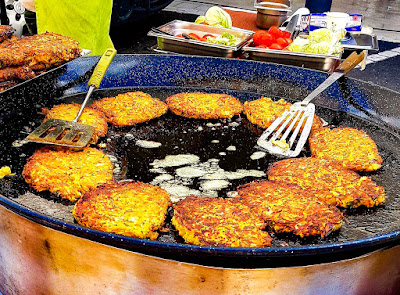 Villages and towns are in full flow with markets and fêtes a regular feature. Hustle, bustle, goods and produce along with alluring aromas wafting from street food are all incredibly enticing. As was the invitation we received from our English pals, Pat and David.
Pat is a super chef and really knows her onions when it comes to putting together a meal. She and David had invited us to supper, which we enthusiastically accepted. As usual, it was delicious, the crowning glory of which was Pat’s Vietnamese wrap canapés. Succulent bundles of heavenliness, they were flawlessly handcrafted using a variety of fillings that zinged off the palate and caused havoc with our taste buds. Such was the success of these little beauties we pleaded with Pat to hold a masterclass at a later date.
Word got round in the run-up to the evening. Numbers increased from a discrete three ladies to four couples. Except it didn’t quite turn out like that. Being a nuts and bolts sort of a chap, Jack, my husband, loftily refused to have anything to do with a cookery class. Then again, he was reluctant to pass up an opportunity to sample more of Pat’s cuisine. He was stymied. The magnanimous solution was that he’d crack on with his latest engine repair and join us later. I’ve seen Jack battling in the kitchen, it was a sensible decision.
On a sultry evening, I set off for their home. Hidden down a lane so secret it has grass growing down the middle, it nestles in a dip protected by woods and meadows. Dappled light filtered through the green canopy as I drove along. My destination was ahead in a clearing. Golden sunrays dazzled me as I drew up to their gorgeous farmhouse. (You can see what a jewel it is from this pic taken earlier in the year.) 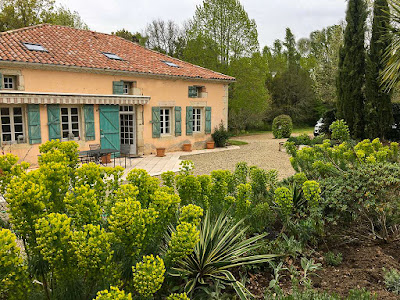 French, British with the possible hint of Italian descent thrown in, our international crew turned up bearing homegrown produce and liquid gifts. True to their natures as consummate hosts, Pat and David welcomed us with warm hugs and glasses already filled with apéritifs.
Pat being Pat, she had everything beautifully organised. Plates of ingredients filled with minuscule-sized delicacies had been snipped and piled in expectant heaps. Empty plates lay ready for each pupil along with several bowls of water. Might a ritual cleansing be required before we began? We would soon find out.
I should also mention that Pat’s career included working as a cookery teacher at one of the UK’s premier private schools. Her reputation as a highly-skilled cook and child nurturer are the stuff of legend.
We were directed to the terrace dining table, and our class began. Instructions were issued, and a short demonstration was given, which solved the bowls of water mystery. Allwe had to do was soak a rice paper disc for a short time, remove and then fill it with a mixture chosen from Pat’s pre-prepared goodies. Fold in the edges to make a parcel et Voilà! Simple.
We were off.
It quickly became apparent that while Pat is a stellar chef, her pupils had much to learn in the art of building a Vietnamese wrap. There’s definitely a knack to it.
Have you ever worked with rice paper? It’s pesky stuff. Looking like an oversized contact lens, it is slippery and a tad slimy when wet. It’s also prone to splitting so must be handled with care. 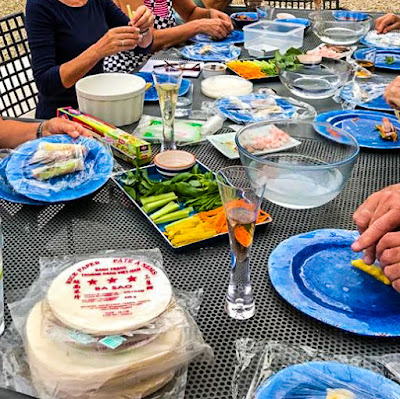 My first mistake was quantity control. Agonising over choice, I stuffed loads in. Wrestling to get my clammy package closed, I quickly pinned the edges together and squished it, folds down, on my plate in the hope that it might glue together. It didn’t. I stared miserably as my podgy mass gradually unravelled, ending up in an amorphous splurge of assorted morsels.
“No, Beth, I’m afraid that won’t do,” observed Pat, “good try though. Have another go with fewer bits,” she added encouragingly.
Di, my sister, who had been chortling on the side-lines at my pathetic attempts, had the opposite problem. Sensibly economic, she had used just three julienne-cut carrot matchsticks plus a sliver of cucumber. That didn’t work either. It looked like a wacky-baccy cigarette which wasn’t worth the smoke.
Meanwhile, another trainee was developing consistency problems. Something he’d done in the bowl was causing the rice paper rounds to lose their elasticity. Try as he might, and full marks, he was totally focused, the end results looked like flaccid opaque slugs. 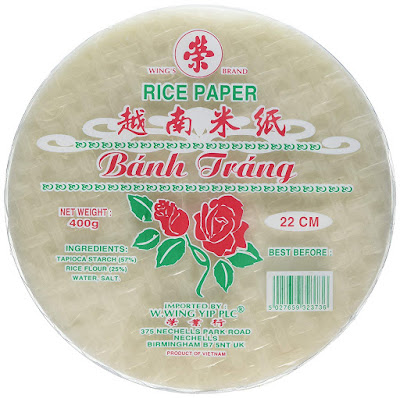 Happily for Pat, in sharp contrast to us flounderers, one of the class quickly caught on. Fiendishly competitive, Jane transformed into a human production line, producing endless examples of what a Vietnamese wrap really should look like.
Mind you, nobody likes a teacher’s pet. As the rest of us blundered on with variously exploding, skinny or lax offerings, our labours were periodically punctuated with chirpy commentary.
“What do you think of this one, Pat? I think it’s my best yet.”
“Very good, Jane. Yes, that’s another excellent one.”
Had it burst? Was it too skinny? No, nope, it was a perfectly wrapped little parcel full of nicely-selected gubbins. Suppressing a tut, and making a mental note to ask Jane if she enjoyed wrapping Christmas presents, I returned to my greyish blob.
Defeat is not on the menu of our consummate chef. True to her teaching instincts, Pat refused to end our masterclass until we had all made at least one presentable canapé. Since most of us were best described as low-achievers, this took a while.
“Stop fishing around in the bowl, Pierre, it’s rice paper, not a goldfish. It’s gone soggy now, just take it out carefully. Never mind, I’m sure you’ll crack it before we run out of supplies.”
“Ah, now that’s a much better effort, Chloé, although you might want to re-think your choice of mixing wasabi with mint leaves. Aside from that, you’ve done a lovely job.” 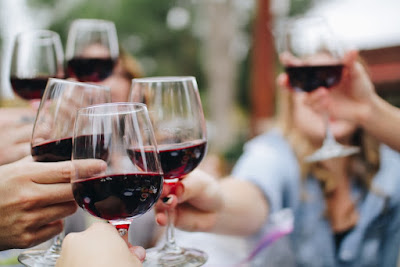 As we beavered away, David, who was observing, recognised the signs of culinary strain. He came to our rescue with wine, surreptitiously filling glasses throughout the session. It did a champion job in keeping our spirits high, transforming frustrated groans into shrieks of laughter as we giggled at one anothers’ efforts.
By the time we’d finished, every trainee had specimens that passed muster. I was still struggling with my tendency to produce fat torpedoes and Di, spindles, but they were deemed acceptable. Jane, however, could have fed an army with her mountain of culinary beauties and accepted the constant teasing with good grace. 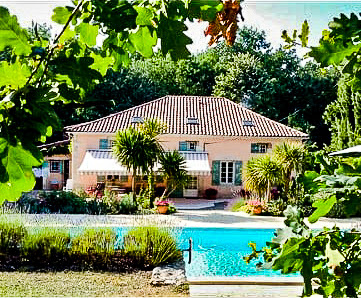 “Well done, everyone,” exclaimed Pat, “and now we’re going to enjoy the results.”
With uncanny timing, Jack turned up as Pat reappeared with platters laden with our best efforts. As we sat enjoying our al fresco tapas, I reflected on how priceless evenings like this were. And what is the secret to making a top Vietnamese wrap? Well, you’ll have to ask Pat, our cordon bleu chef, but here is the method along with some of our mixings, and they were seriously yummy! 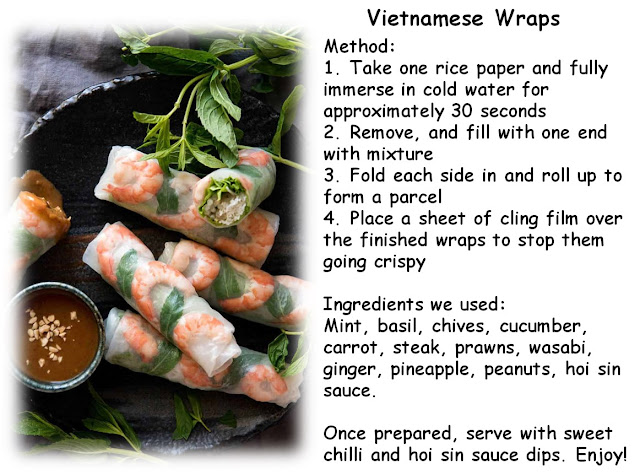