An ancient bastide, the home of a world-famous person, extraordinary architecture, and more. Did I go to visit this? Nope, I was sent there to trace a lost parcel.
We live in an area so remote it takes years for posties to learn where each home is hidden. When one of these experts takes time off, it’s mayhem in the sorting office. Letters get pushed through the wrong slots, and parcels regularly go missing, as did mine.
“Go to Beaumont de Lomagne, Madame ‘aslam,” said our local postmaster.
“Why? It’s a long way from here.”
“You must make a claim for your lost parcel. This is where you do it.”
“So, you don’t think it will be re-delivered?”
“Oh, no, Madame. Anael, your usual facteur, is on paternity leave again. We have the temporary staff to cover while he is away and there have been many problems already. It is definitely our fault. I am sure your parcel will never arrive.”
And that was that. 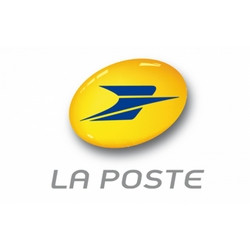 The following day I drove to Beaumont and found the post office easily enough. Observing the new standard protocol, I waffled through my mask, and the lady hooted back through hers. After a verbal tussle, we worked out what one another was saying.
“You need a compensation claim form, Madame.”
I live in France. This wasn’t a surprise. The lady produced a dangerously complicated-looking document with many spaces. I had a bash at filling them in, quickly got stuck and asked for advice. She got stuck too, and the process ended up as a team-building event with two colleagues brought in to help.
I left the post office feeling a mixture of mental exhaustion and relief. It then occurred to me that having come all this way, I might as well have a potter, and why not? The weather might have been glum, but I was in a place of great historical significance. It was too good an opportunity to pass up.
The bastide town was created between 1276 and 1279 following a feudal treaty between the abbey of Granselve and the king of France Philippe III le Hardi (the Bold). Today, there is an air of tired crustiness about the place, but therein lies part of its charm. 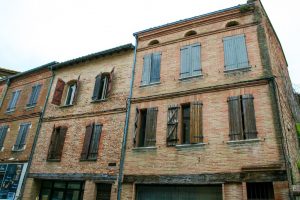 As with many ancient towns, the market hall is a centrepiece, and this one is a favourite of mine. It was a quiet day, which allowed me to have a proper look. 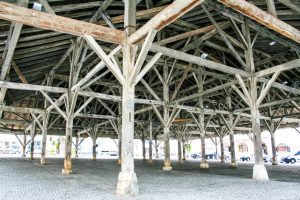 Although planned from the original 13th century bastide foundations, it was not built until the 14th century. It became the focal point for the weekly market on Saturday mornings and still is. Silly though it sounds, I love having bought goods on the same site used by folks in medieval times. 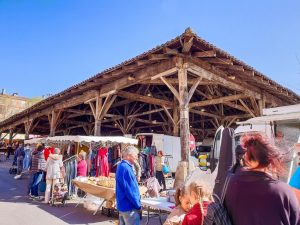 I looked up. Talk about a wow factor. The immensely complex oak frame of this square building always fascinates me. 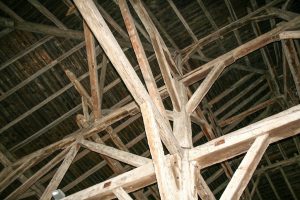 No wonder it needed 38 posts to support it. Each of these rests on a stone plinth set at a different level to compensate for the slope. As I was soon to realise, Beaumont is town suited to those with mountain goat tendencies. 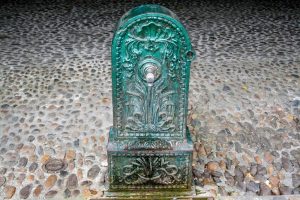 I paused to read an information panel. The base I was walking on was paved with differently coloured pebbles. It had been sympathetically restored. In total, about 370,000 stones were placed manually to recreate the original base. The work took a year to complete. Imagine that! 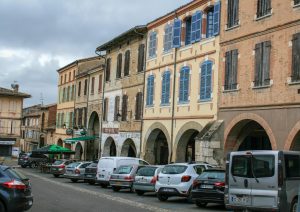 The hall is sheltered on two sides by arcades. Faded yet splendid, cafés, fruit sellers, pharmacies and pâtisseries, all the essentials are represented here. Ahead, on the incline was the Mairie. Pride of place as usual, with plaques of Liberté, Égalité, Fraternité emblazoned across the front wall. The town hall looked magnificent. 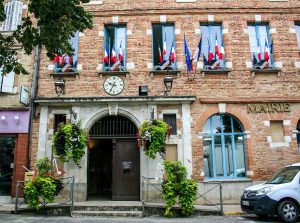 As I strolled past, I admired the unusual attractive additions to civic floral decorations. Metal music clefs, notes and instruments sprouted out of plant pots, all celebrating la Fête de la Musique which had recently taken place, as had the Fête de l’Ail blanc de Lomagne, albeit in a tiny form this year because of COVID-19.
Traditionally, the garlic fête takes place at the end of July, after harvesting and drying the yield. Over 15,000 devotees flock to this annual festival, keen to immerse themselves in a packed programme bursting with garlic-related festivities.
A wide selection of local produce is offered during the fête, but nothing can compare with the star of the show. An estimated three tonnes of garlic are sold every year. One of the main attractions is the hotly contested garlic-peeling challenge, the very thought of which made my eyes water. Yes, despite its sleepy appearances, Beaumont is a happening place. 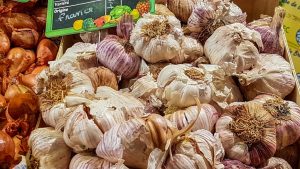 Keen to learn more about the town, I headed uphill towards the tourist information centre. En route, a magnificent bronze statue caught my eye. It was Pierre de Fermat. But just who was he? 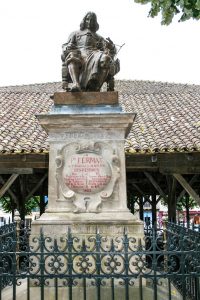 Pierre de Fermat (Beaumont de Lomagne 1601 – Castres 1665) was possibly the most productive mathematician of his era.  He is considered to be one of the fathers of analytic geometry, along with René Descartes. He, in collaboration with Blaise Pascal, was also one of the founders of probability theory.
Maths fans will be aware that Fermat’s most important work was done in the development of modern number theory, a favourite subject of his. He is best remembered for Fermat’s Last Theorem. I don’t profess to understand it, but for those of you who do, here is the link.
IMAGE https://www.britannica.com/science/Fermats-last-theorem
My mind bristling with unfathomable theories, I headed into the tourist information centre. Unsurprisingly, it was based in the quadrangle of another magnificent mansion, which appeared to be part of Fermat’s old home. 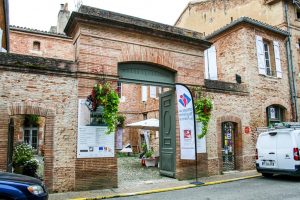 A masked-muffled exchange took place between the girl behind the counter and me. Now hopelessly inspired by the history and determined to share my photos with you, I asked for further information about the town. Her eyes lit up.
“Here you are, Madame,” she said, thrusting a wad of leaflets in my hand.
“Lovely, thank you.”
“You are welcome, and I can show you a 360 degree view of the town. You must see this, come with me.”
Intrigued, I dutifully followed the girl out through the quad, down several steps and along a dark passage. Just as I was beginning to think something had got horribly lost between the folds of my mask, she abruptly stopped.
“Here,” she said, plunging an enormous key into an archaic lock. A clunk released the internals, and the door swung open. “Take these stairs,” she said, pointing at a stone spiral staircase, “at the top, you will see the view. Please close the door when you return.”
And with that, she left.
So, there I was, down a shadowy passage looking at a set of medieval steps. Not exactly The Raiders of the Lost Arc, but I did feel slightly intrepid. I started climbing the stairs. Up and up I went. 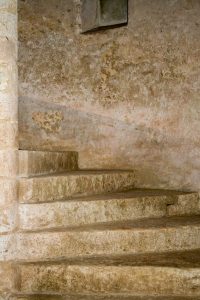 And up and up. 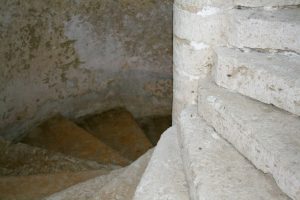 Still going up, I paused to take a photo of an extremely short person’s door, but I was kidding myself. I was trying to catch my breath. 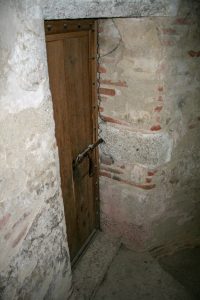 Inexorably up, and finally, there was light – a skinny flight of steps which I presumed led to the top. 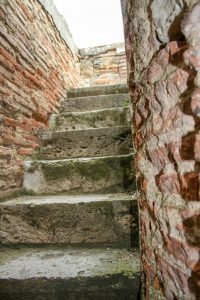 Thigh muscles screaming, I finally made it. Two thoughts occurred to me. This was very likely to have been where Fermat’s theory of probability was hatched. That being the probability of the stair climber having a heart attack before reaching the top. Secondly, the brilliance of the suggestion made by the lady, who had wisely decided not to accompany me. Mind you, those views were fantastic. 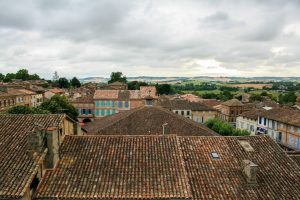 I grabbed my camera and started clicking. A bastide town built on hills, I could see it all, and the gorgeous Gers countryside in the distance. Another half turn and a mass of geometric roofs lay before me. The pic could make a terrific jigsaw puzzle. 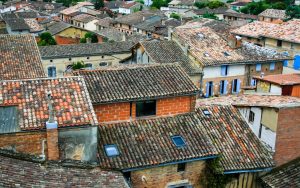 Another turn afforded a stunning view of a new focal point – the massively imposing red brick church, what a remarkable building that was. 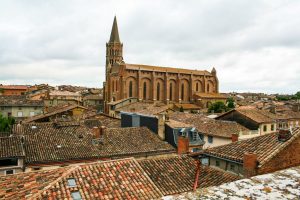 After another few turns, it was time to retrace my steps. For someone who spends hours and hours rambling with dogs, I was surprised how wobbly my legs felt by the time I reached ground level. Extreme stair climbing evidently requires the use of niche muscle groups.
Still puffing, I returned to the tourist office to thank the girl for her help. I was about to stagger out when she had another bright idea.
“But have you seen inside l’eglise Notre Dame de l’Assomption yet?”
“The church? No,” I gasped.
“You must! It’s around the corner and up the hill.”
“Yes, I did see it. Oh, another hill?”
“Yes, you can’t miss it.”
The French are a forthright lot.
But she was right. It was such an imposing building I couldn’t leave without at least having a peek. I’m so glad I did. 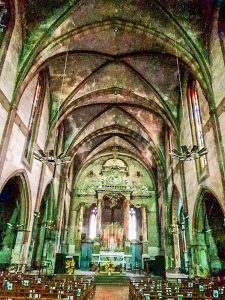 Building work on the catholic church began in 1280. Withstanding wars, famines, religious struggles and storms, like many buildings of its age it suffered. Restoration work has been almost continuous throughout its history, the aim always to maintain the magnificence of the construction. 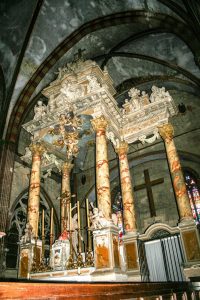 There wasn’t another soul about as I walked down the bevelled flag stoned aisle. It was dimly lit, but I could still see how magnificent the alter was, as were the side chapels. I paused to admire each one – some extravagant, others unassuming. 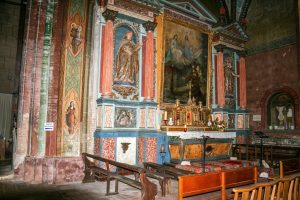 I looked up at the vaulted ceiling way above. It was contrastingly simple. Tranquil. Yes, the wear and tear were apparent, but it couldn’t detract from the inherent beauty of the architecture. The purity of lines and arches were intensely appealing. 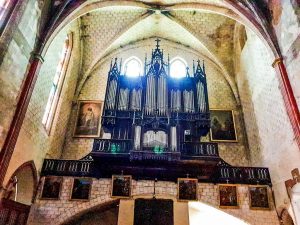 I turned back to face the doorway. Above, was a magnificent organ, one day I would love to hear that played. I could easily have spent much longer enjoying the serenity and artefacts, but time was against me.
I headed back downhill over the cobbled streets, passing crumbly shutters, massive oak doors and truly outstanding buildings. It had been a wonderfully unexpected adventure, one to remember. Oh, and did my parcel ever turn up? No, of course not! 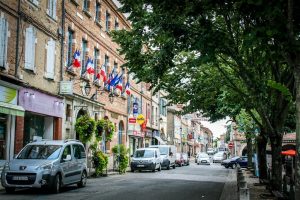