Do you enjoy a good old browse? If so, you’ll be among friends here in France. It doesn’t matter whether it’s a vide grenier (garage sale) or a brocante (flea market); browsing for a bargain is a national pastime. Many of our French friends are devotees, one of whom is especially keen. 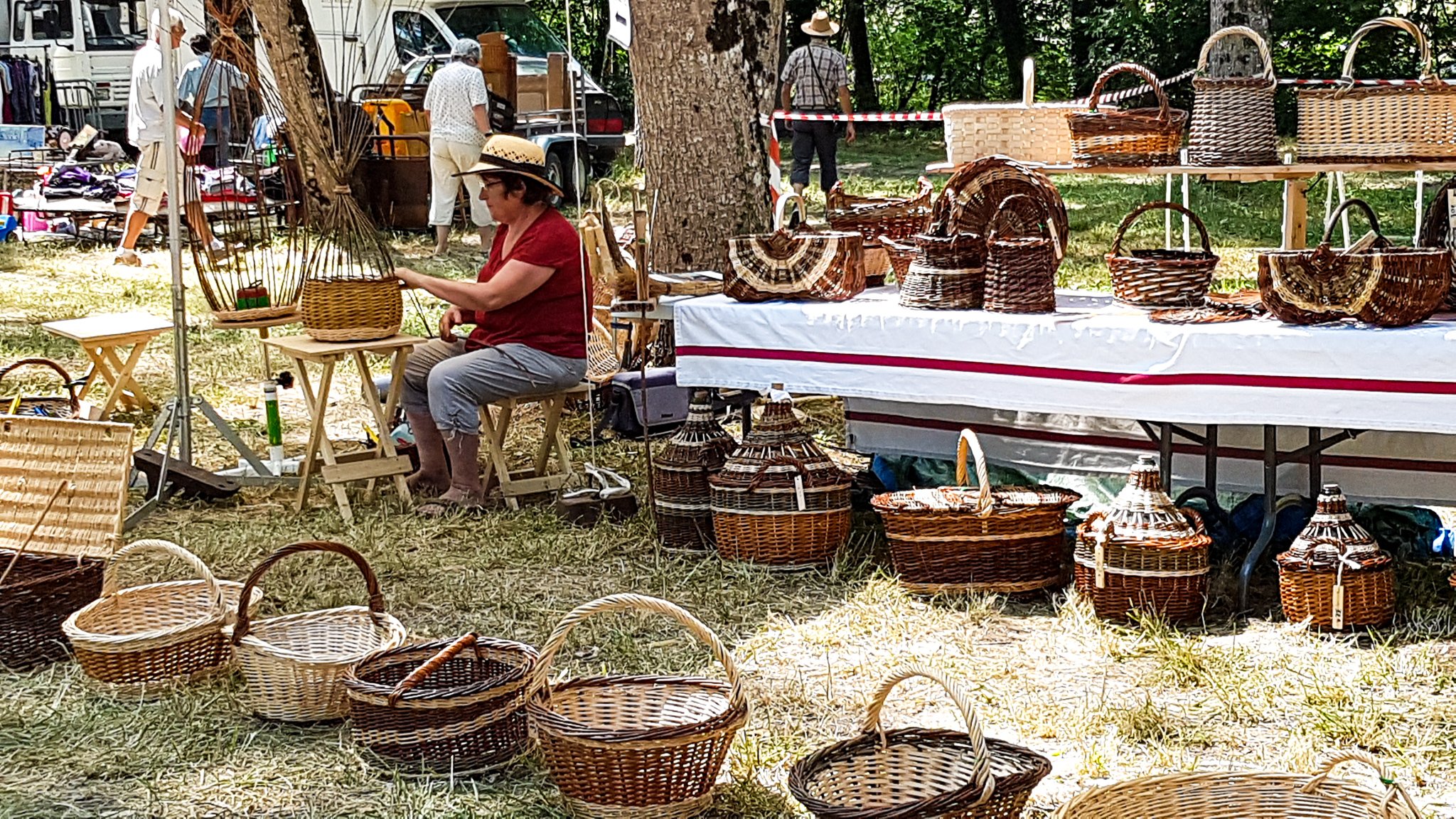 Jean-Pierre visits at least one vide grenier or brocante every week, pretty much all year round. He’ll return, bursting with stories of triumphant marchandage (haggling) sessions, regaling his long-suffering wife and anyone else within earshot with shaggy dog stories. Bartering, it seems, is the essence of a successful trip.

Jean-Pierre has particular loves. Despite having no understanding of English, undaunted, he’ll forage among tome after tome until he finds a British literary gem. This will be added to his already enormous library and cooed over. But never read. He also regularly adds to his thousand-plus collection of long-playing records. It’s such a shame he doesn’t own a record player. 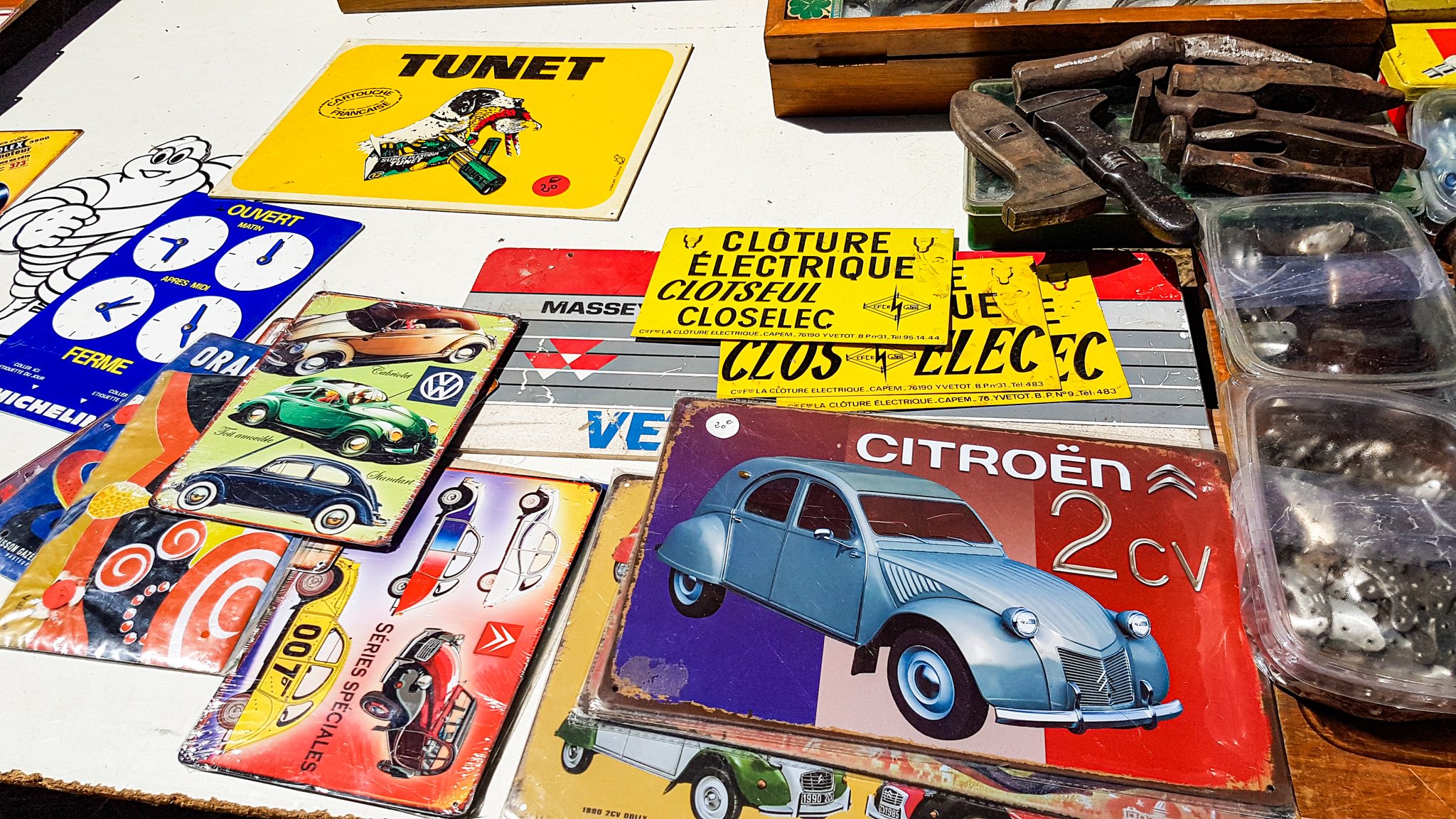 Hauls of unspecified bric-a-brac join the existing mass of undefined objet d’art in Jean-Pierre’s outhouses. They’re so full that his tractor and farming kit now live outside. And he is constantly on the lookout for delicious new finds. It’s something he’s seriously passionate about. 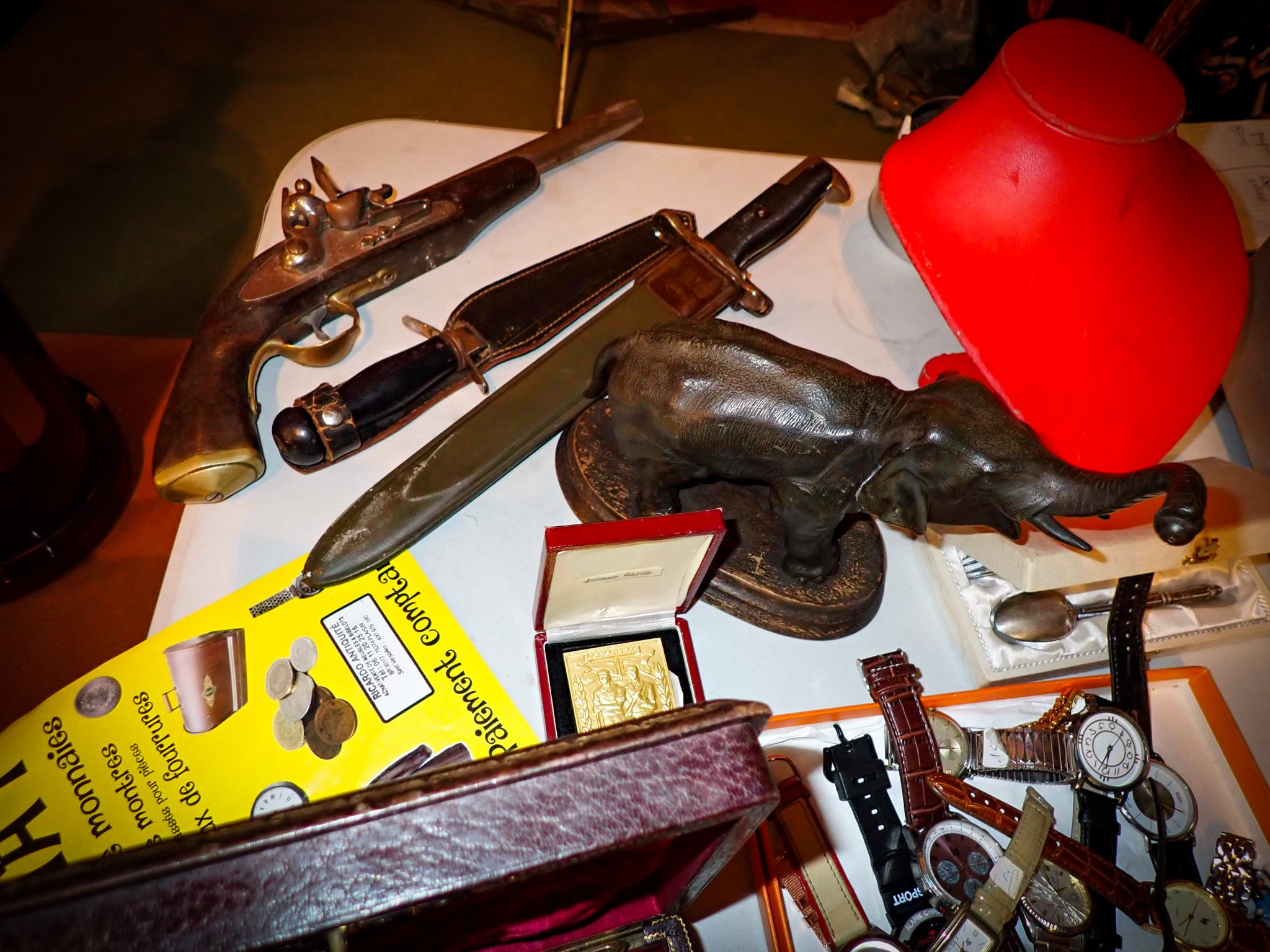 I must admit to loving a rummage at our local brocantes too. Being a person who is easily impressed, and much to Jack, my husband’s dismay, I’m quickly persuaded by silky assurances from salespeople about brilliant bargains and must-buys. Like our eccentric friend, I rarely come away empty-handed. Mind you, I have learnt some salutary lessons at these events, the first of which occurred at a vide maison. 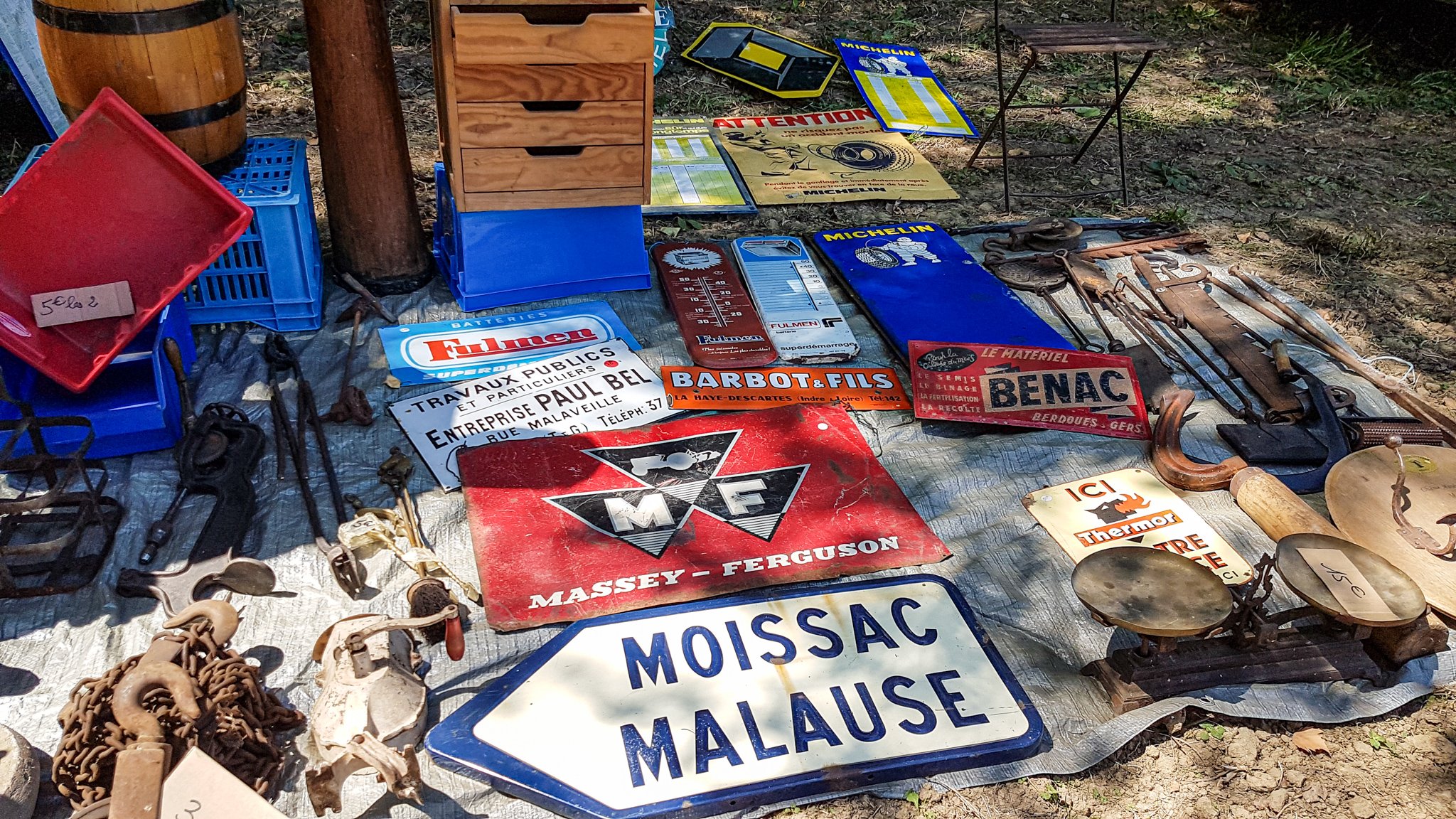 Vide maison sales are slightly different. They take place at a person’s home, often when those concerned are moving and want to get rid of surplus goods, or in the case of the one we attended, the previous owner had passed away, and the family decided to clear the house.

It was one of those few occasions when Jack came with me. I expect it was due to nervous tension since everything from the kitchen sink to the garden urns was being sold, all the things he knew I would probably find irresistible. And I did. As Jack clucked menacing irritations about budgets, I joined the crowd, gushing over charming cracked china, pictures and fusty furnishings.

I finally spotted the very ensemble I didn’t realise I must have: a lovely cottage style kitchen table and chairs. After a somewhat confusing bartering session, I bought the furniture for a great price, or so I thought. It wasn’t until we’d carted the ensemble home that we noticed the wiggly free gifts. Like the cabinet we had bought some years ago, my new table was alive with woodworm. It took Jack a while to get over the shock.

My most recent exposure to the foibles of bartering took place at a brocante specialising in antiques. The fair, which has been running for years, draws professional exhibitors from Occitanie and Provence. Brocantes like this tend to be pricey, but they’re great for a look-see. I’d been dying to go for ages and tried to persuade Jack to come with me. His response was succinct.

“Absolutely not. Go with someone else, and for goodness’ sake, don’t buy anything riddled with parasites. We’re still dealing with an infestation after your last ridiculous purchase.”

Fortunately, my pal, Sarah, loves the idea of winning a bargain and agreed to join me for an antique-fest. We arrived early, joining a group of magnificent dignitaries as they perused exhibits. There were all sorts of exciting goodies, ranging from pictures to tableware, fabulous ironmongery, lamps, glassware and much, much more. 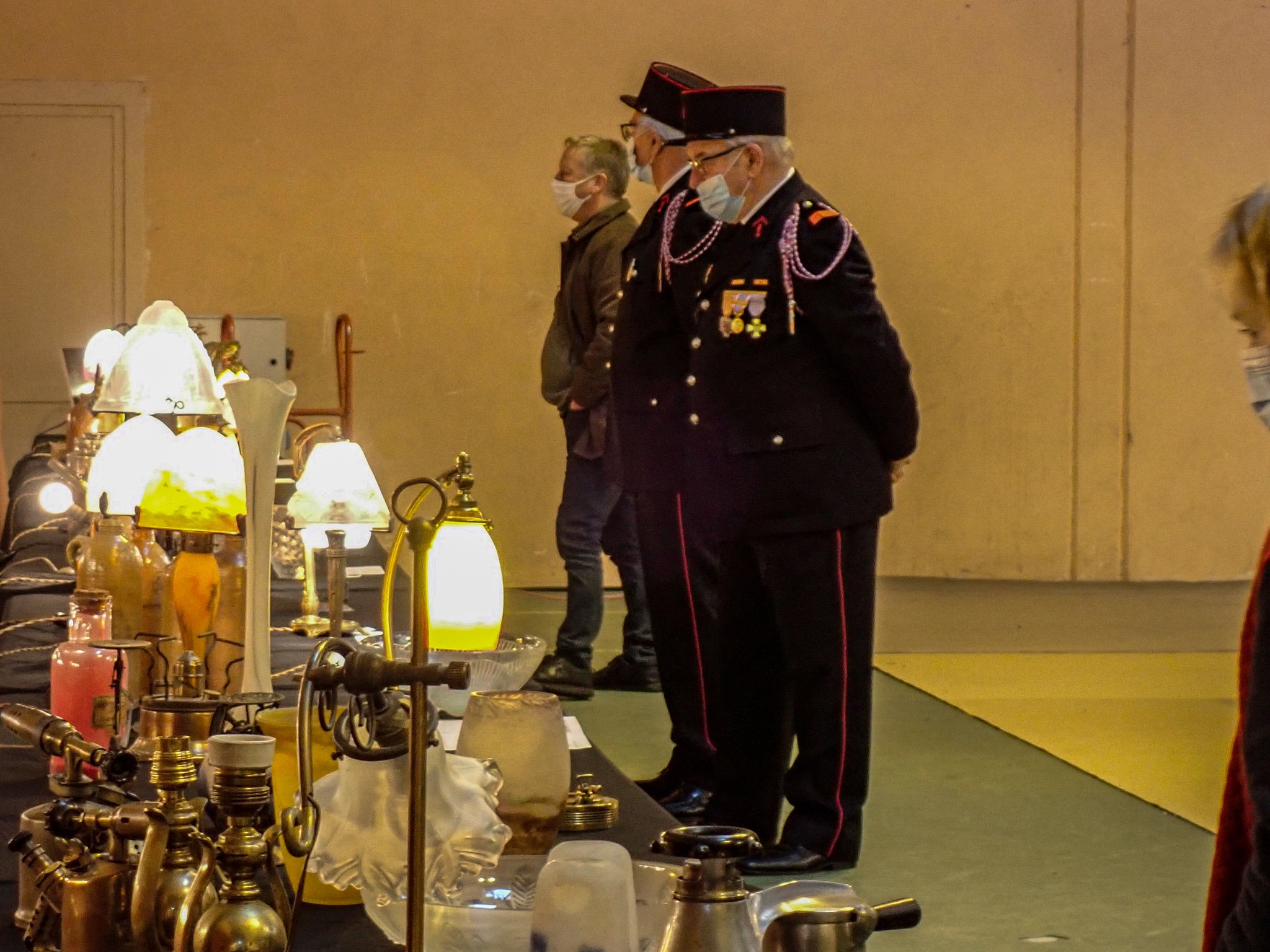 My eye was immediately drawn to the antiquarian book stall, where I had a reverse Jean-Pierre moment. It’s just as well my fluency with French isn’t up to tackling pithy works; otherwise, I’d have blown my modest budget in seconds. 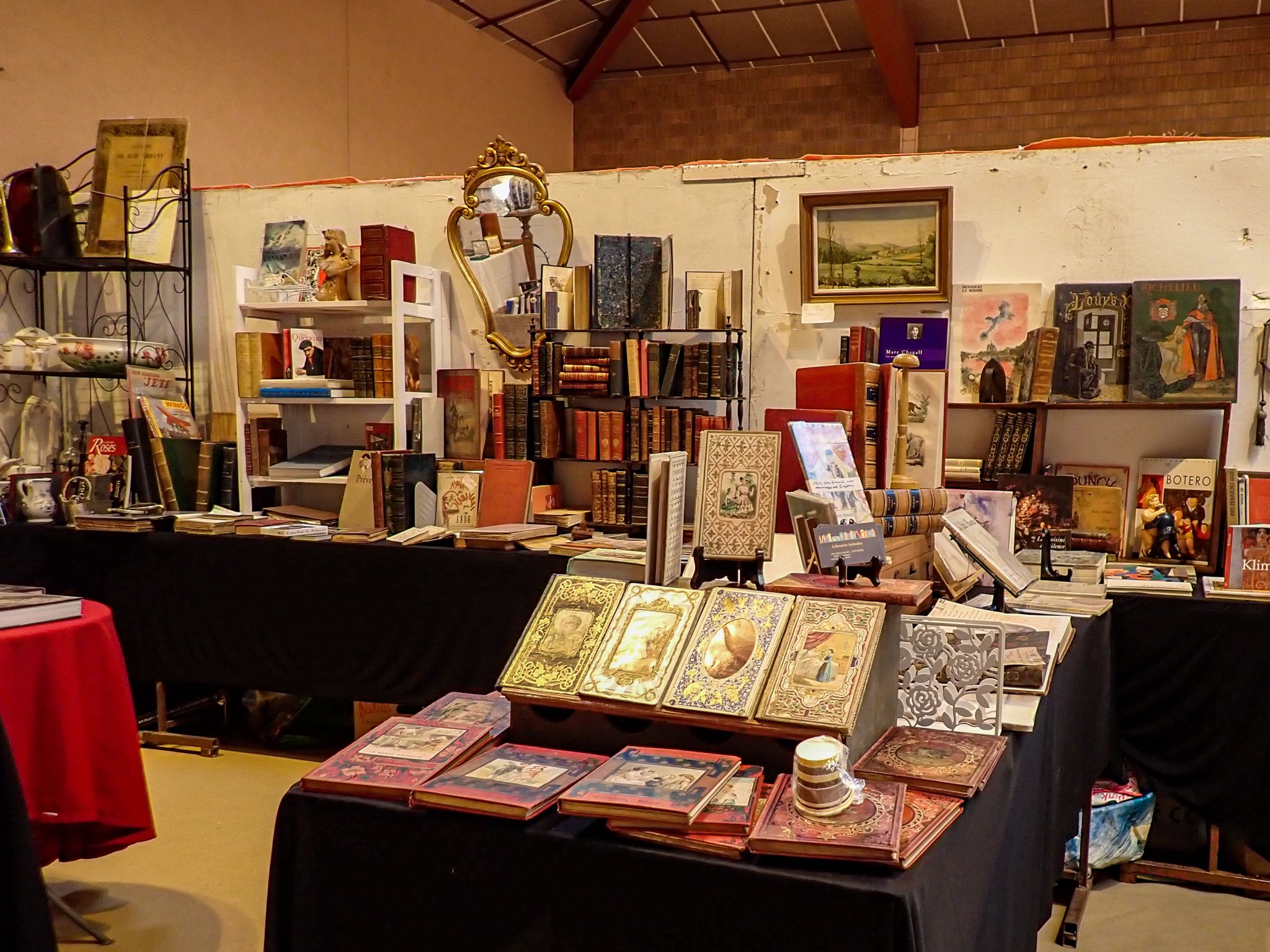 More interested in the linens, Sarah was attracted by a honey trap of materials, and I’m not surprised. Many of the tablecloths and monogrammed napkins were exquisite, as were the bedspreads and lace items. 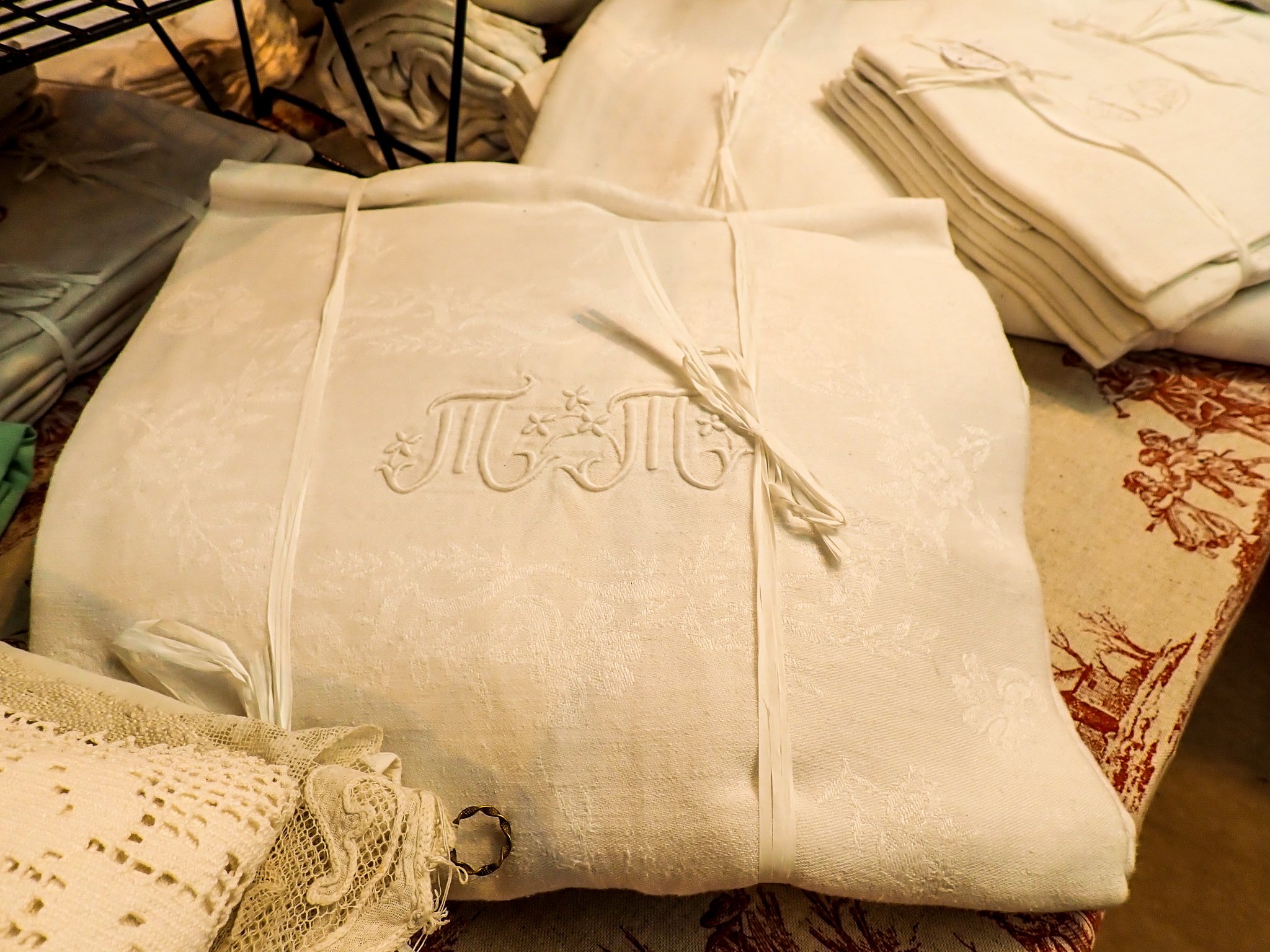 The clothes were intriguing too, although possibly better placed in a museum. Despite being beautifully made, we decided that we haven’t quite reached the age where bloomers and ankle-length frilly nightdresses are de rigueur. Instead, Sarah masterfully negotiated a great deal on a toile throw. 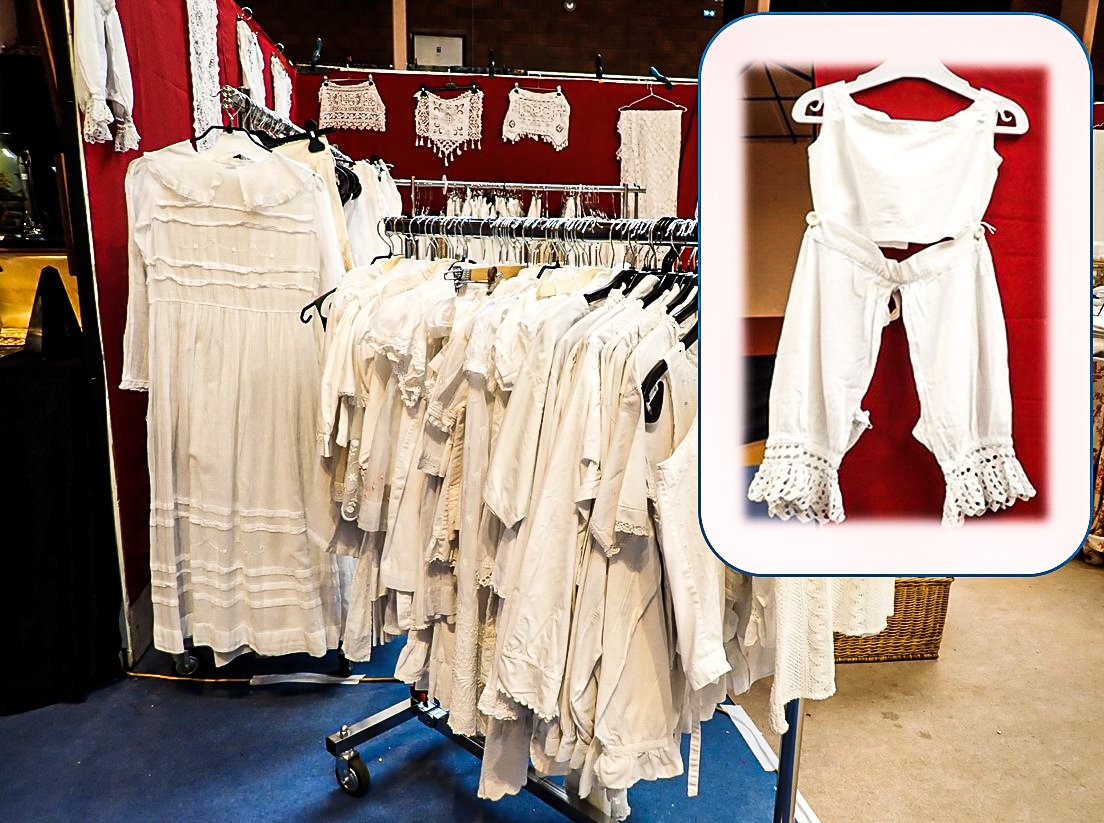 This time in the china section, where expansive elbow flourishes were ill-advised, we continued mooching. It was crammed with ceramics from different eras. Did I love the pheasant? No, not really, but I was sure someone would. 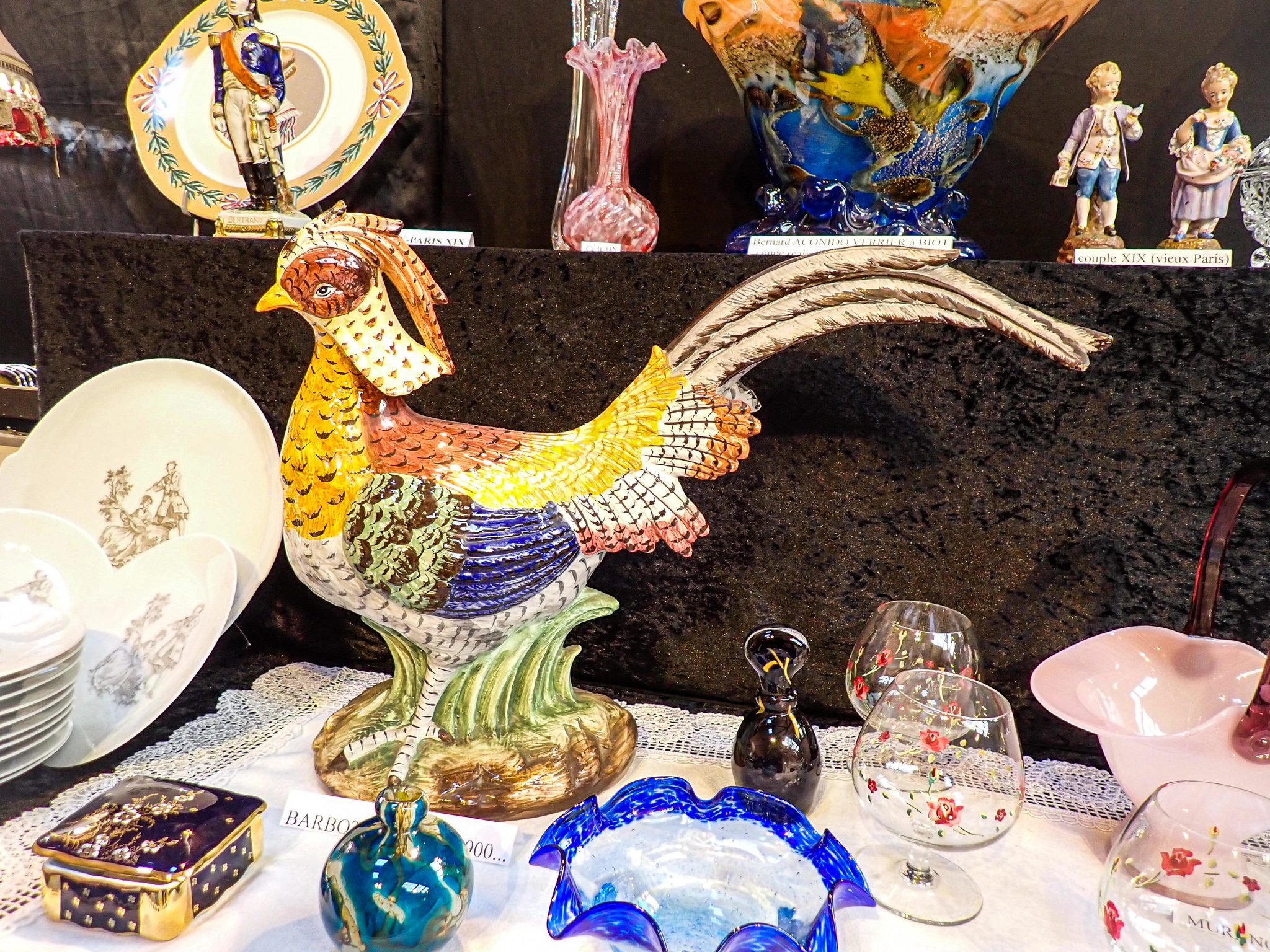 Nevertheless, I did fall in love with a pair of Limoges plates. A hawk-eyed merchant spotted my interest and swooped in for the kill. I asked the price, and as I’d expected, the answer was horrifying. Despite trying to persuade me that it was impossible to live without his timeless gems, after a couple of half-hearted goes at reducing the price to a realistic figure, I turned down his generosity, and we moved on.

We had been there for about an hour, which evidently coincided with French-style elevenses. Bottles of wine appeared along with delicious-looking snacks, which were conjured up from nowhere. The aromas were intoxicating. Fighting back hunger pangs, we continued to the furniture section. 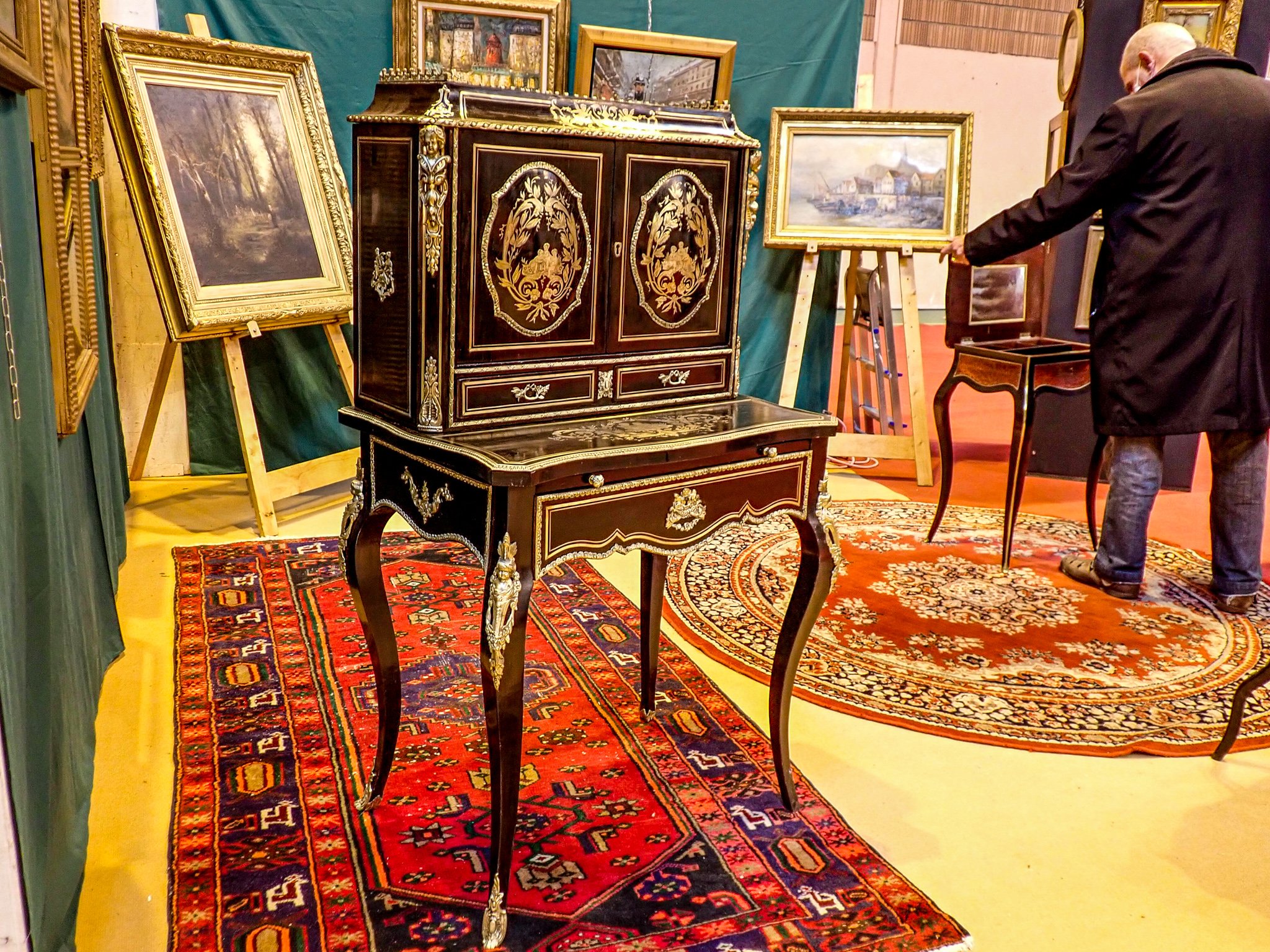 Fortunately, both our homes are furnished with rustic style pieces. Despite humming and hawing over several gorgeous occasional tables, even we had to concede that they would look incongruous next to our chunky chêne massif pieces. 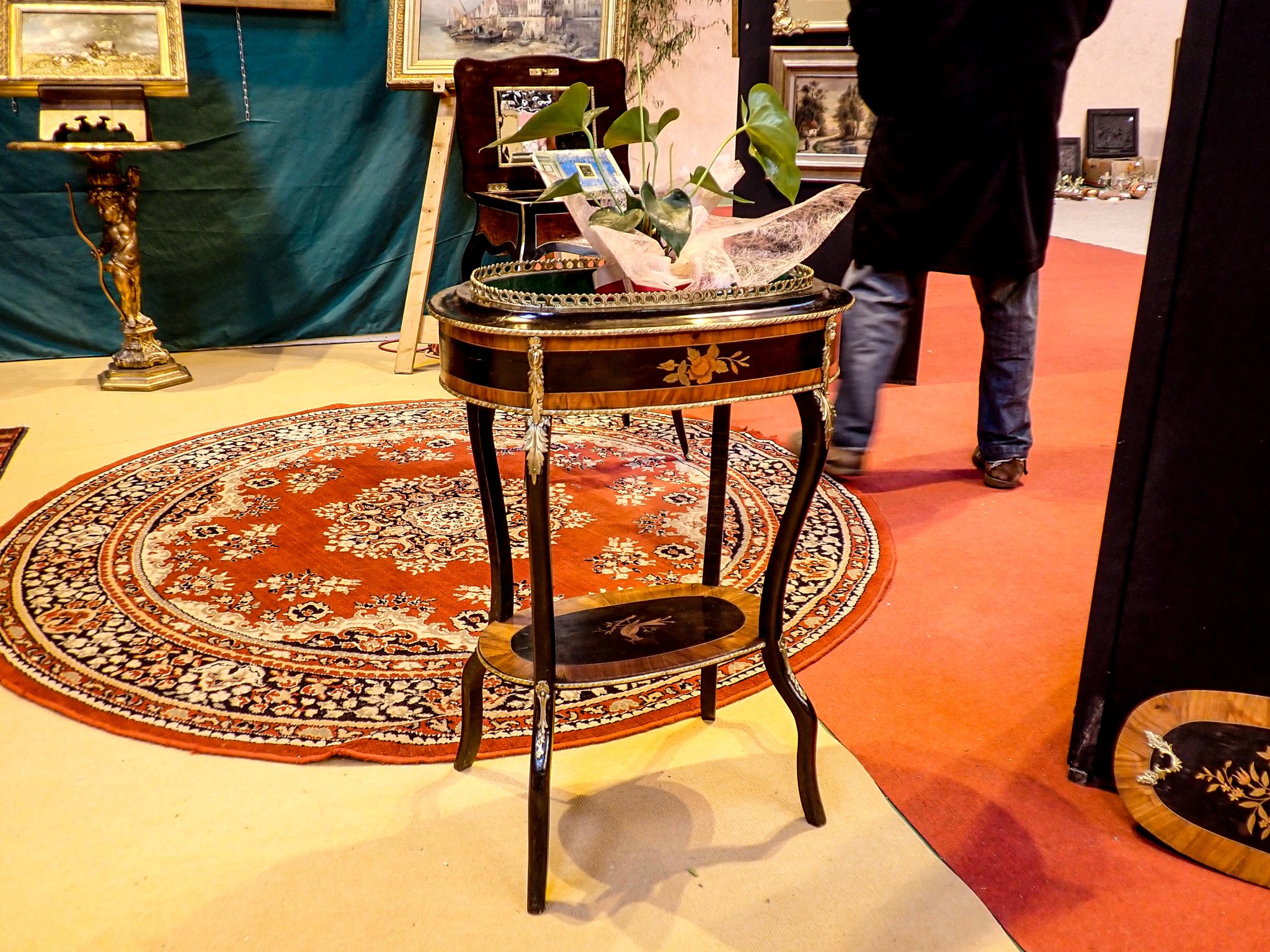 A striking ornament caught my attention. Naively, I started to examine it and was immediately ambushed by a trader. Sensing a sale, he planted his beaker of brandy on a plinth and pounced.

“It is a dramatic piece, monsieur.”

“It is splendide, madame, extremely ancient. Do you want to buy it?”

“But you will love it. Everyone does.”

“Let me tell you the price.”

“Luckily for you, madame, the lion is on sale today. Can you guess how much it costs?”

“Bravo! Les anglais, you are always so timid about money. But I see that, really, you do want to know.”

“Goodness, that is still very expensive!”

“One cannot put too high a price on perfection, madame. Shall I wrap it for you?”

“Oh, no, monsieur. Definitely not, thank you.” 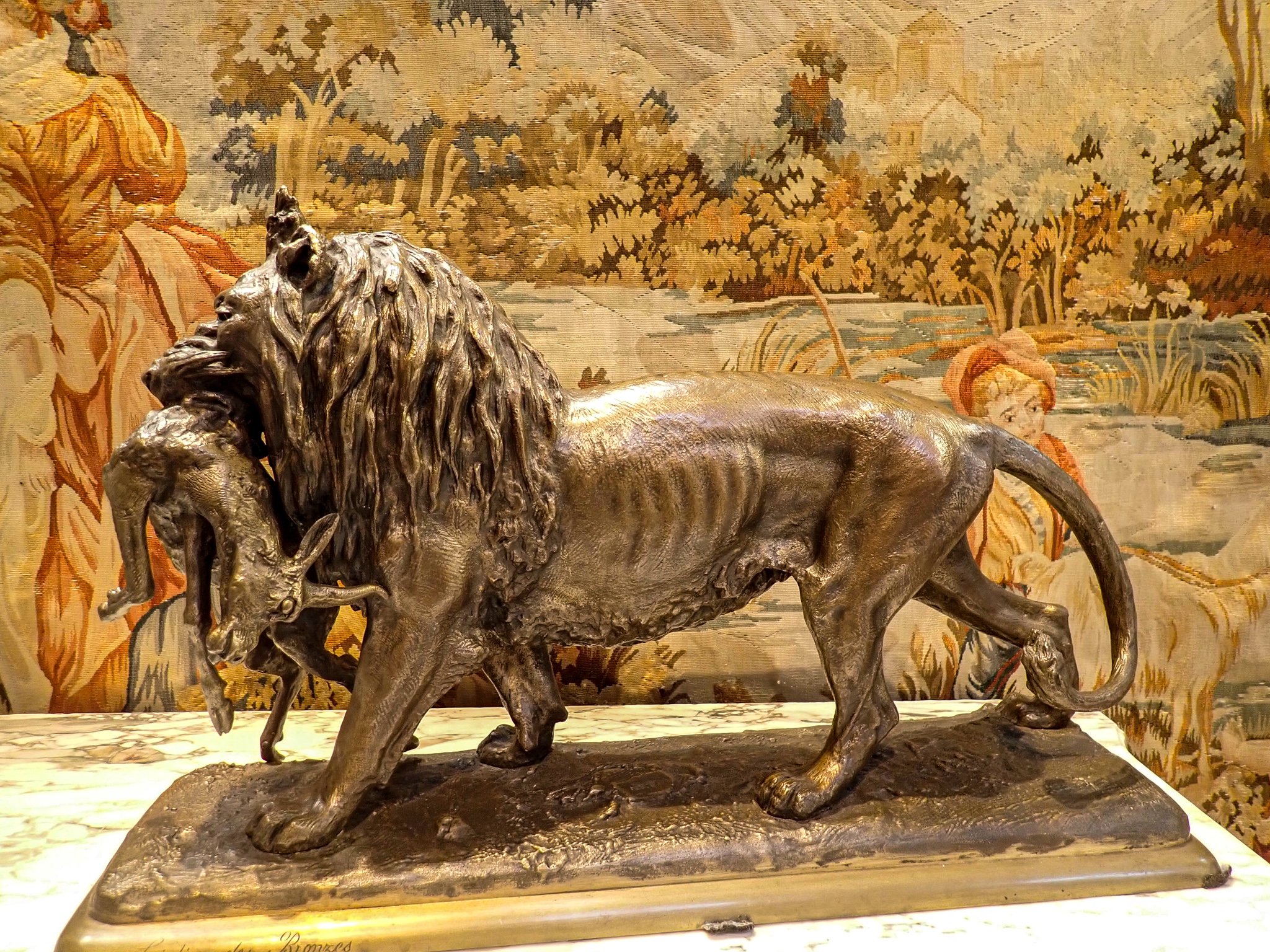 In a frightfully English fluster, I hurried away to rejoin Sarah, leaving monsieur nursing his consoling brandy. Sarah gave me a nudge.

“Fancy a quick peek at that gorgeous chest of drawers over there?”

I looked over at the seller parked next to them. Wine by his side, he was tucking into a fromage-filled baguette, scanning for customers, eager to wow all-comers with his cherished drawers. Intriguing though they looked, I was bartered out.

“No thanks. You go. I’ll check out the rugs instead. There’s nobody around over there!” 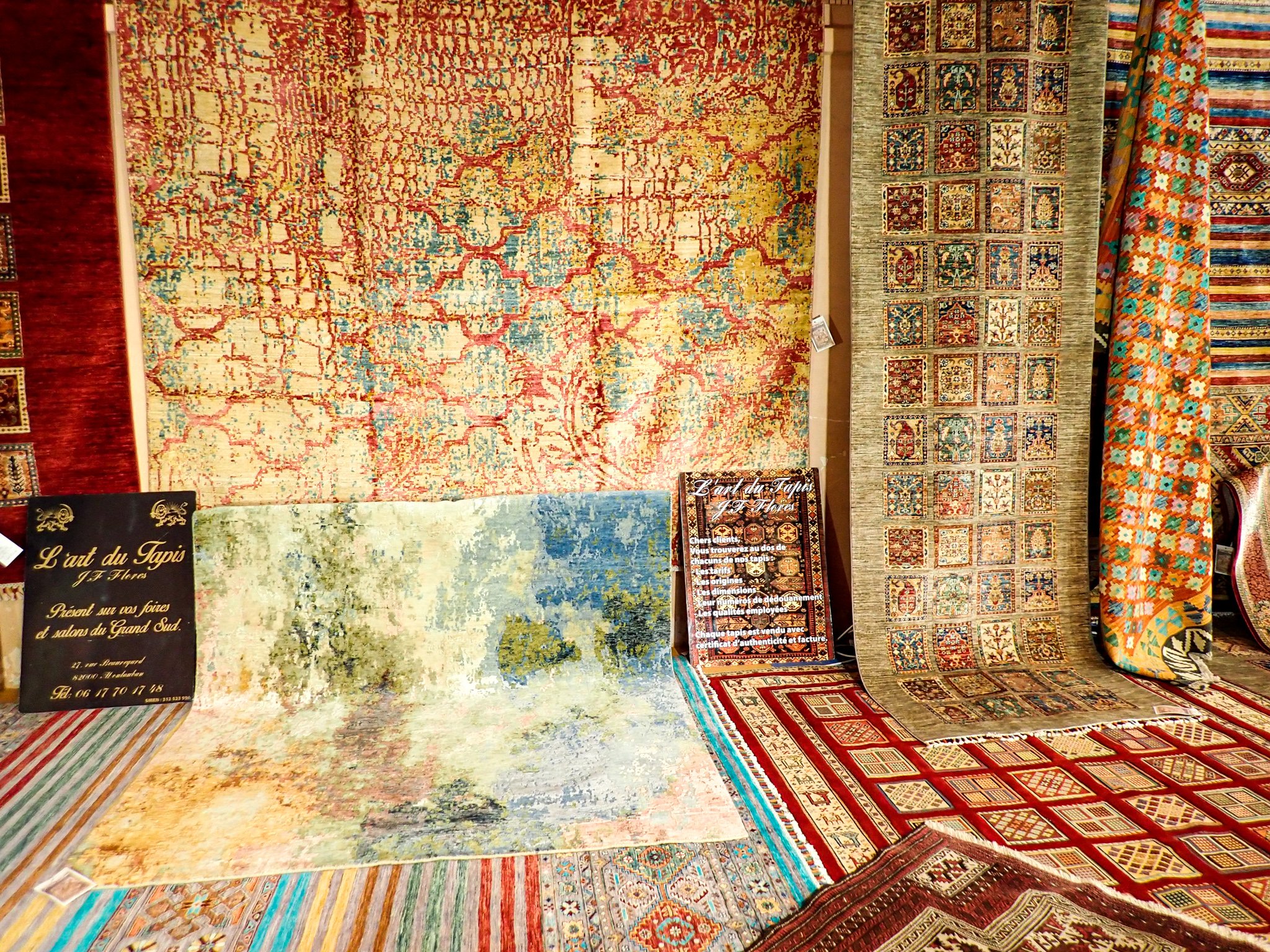