Turrets. I love turrets. The castles they decorate too. Poor Jack. I’d subjected my husband to another one of my ‘let’s go and have a look at that famous castle’ ideas. In this case, we were getting two, almost three, for the price of one. They were in a place called Bruniquel, and I’m still not quite sure why he agreed.

Its first castle was built in the 6th century. Its second began life in the 13th century, and then the third, right next door, was constructed between 1485and 1510. Unsurprisingly there’s a story behind this.

Off we headed with Jack, the anti-tourist, grumbling about wasting precious boiler-mending time. Listed as one of France’s most beautiful villages, Bruniquel lies in the voluptuously forested region of the Aveyron Gorges.

Every time we drive in this direction, we’re wowed by the drama of its natural surroundings. Limestone cliffs, some craggy, others smooth as silk, crash to the rivers below. Radiant colours contrast the stark white rock faces. Blankets of verdant oaks and boxwoods are broken by bare reddish soil patches, scree and vibrant wildflowers scattered like confetti on the ground. It’s spectacular. 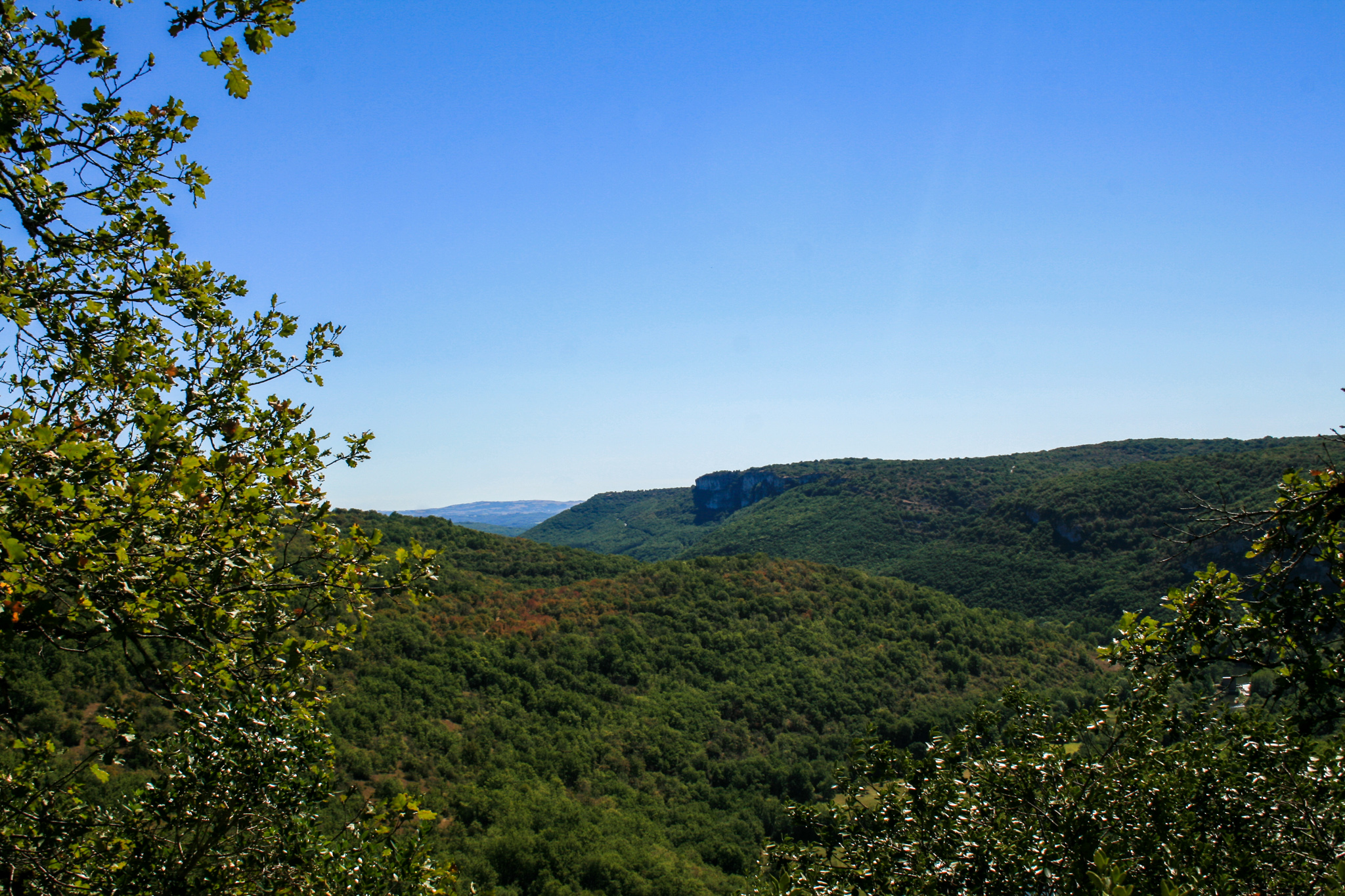 “Don’t start that again. These hairpin bends are hellish to negotiate.”

“No, really, look dead ahead and up. That’s the village!”

“God’s teeth, it’s another one of those ‘up there’ ones again. I hope your castle mania doesn’t last long. I’m fed up with clambering up ridiculously steep hills just to see a ruin.”

“Urgh. Think of the draughts.”

As we drew closer, it was immediately apparent why the village had earned its accolade. Swathes of beautiful buildings, mostly constructed during the Middle Ages, formed a stepped apron around their crowning glories.

“Ahah, there you go, Jack. See those two castles? That’s where we’re going.”

“Those ones sitting on the top of that cliff? Bloody hell, I knew it! Small mercy since they seem to be semi-detached, so we won’t have to trail around for days viewing them. But why build so close together?”

“Hook, line and sinker. I fell for it again, didn’t I? The dratted tourist guide.”

“Listen. It’s interesting. A castle keep was allegedly built in the sixth century by the Merovingian Queen Brunehaut on the site of a Roman fortification. She sounded quite a tarter, actually. She wanted to watch over the valley road connecting the Quercy to the Albigeois. Over time, the village was established.”

“Indeed. Several conquerings later, in the thirteenth century, the Counts of Toulouse built the ‘Old’ castle on the same plot. It became the residence of the Viscounts of Bruniquel.”

“Don’t be impatient. There’s a reason for this. A family feud.”

“During the fifteenth century, the viscount quarrelled with his son and decided to sell the land to the east of his castle to a cousin, Maffre de Comminges.”

“Big deal. Looks like about three strides-worth from here.”

“We’ll see in a minute. The cousin bought the land and built his own castle, which became known as the ‘Young’ castle. This gave the buildings the name Bruniquel Castles.”

“I’m sure he could have found a different cliff edge to stick his castle on.”

“Yes, well, anyway. Both sides of the family battled over the next three centuries. Apparently, we’ll see the skirmish scars in some of the rooms, including the Knights’ Hall. It seems that the owners of the Old castle were Catholics, and those of the Young castle were Protestants, although I’m not sure whether that last bit is verified.”

“I’m not interested in unconfirmed gossip. Far more importantly, I have made a discovery of my own.”

To his relief, Jack had found a driveable road leading all the way to the castles. Up and up we went, steeper and steeper, bypassing the village en route to a barely levelled area where we left our car. 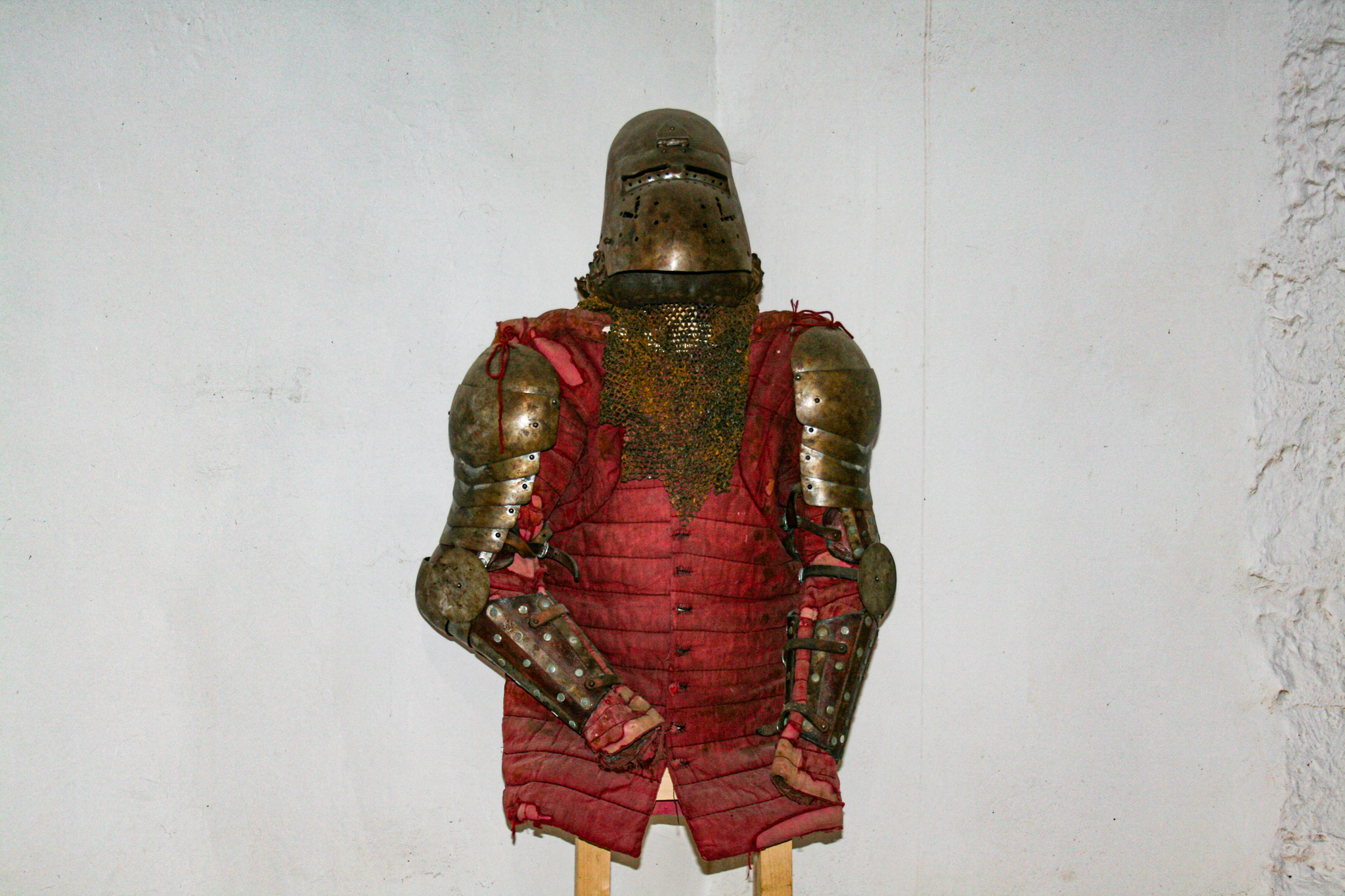 There was barely another soul about when we paid our modest entrance fee. We walked past a suit of armour into a different world. Were we treading the same flagstones as its owner? Possibly. Soon we were immersed in a maze of narrow corridors, spiral staircases, small rooms and dead ends. 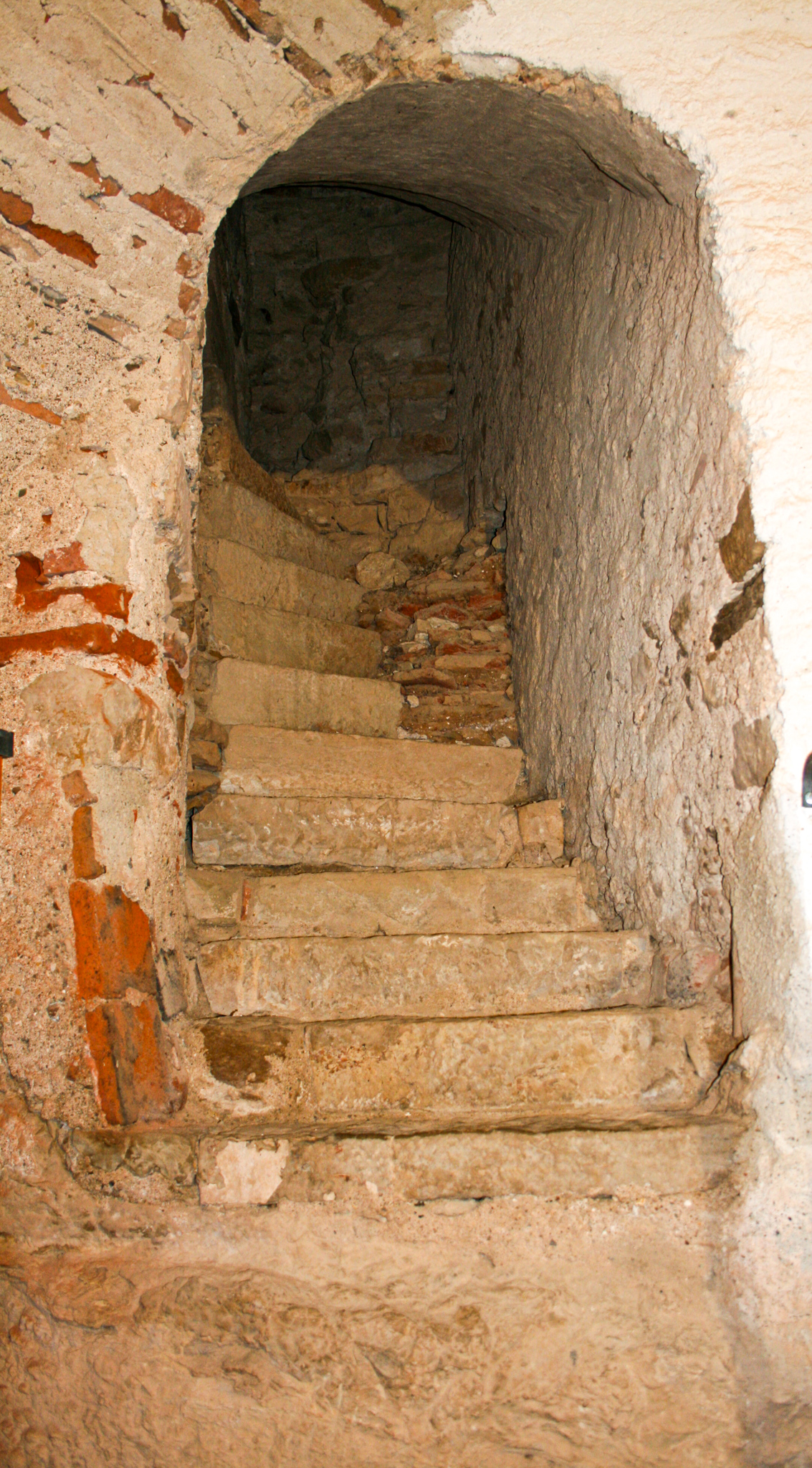 Once again, there is a story behind the abrupt closures. At the end of the 18th century, the viscount of the Old castle decided to combine the buildings by buying the Young castle. Sadly, this came at an additional price.

Taxes were levied on the property, which caused him to block up several doors and windows of his new acquisition. Ironically, it was the Young castle that became the most neglected. 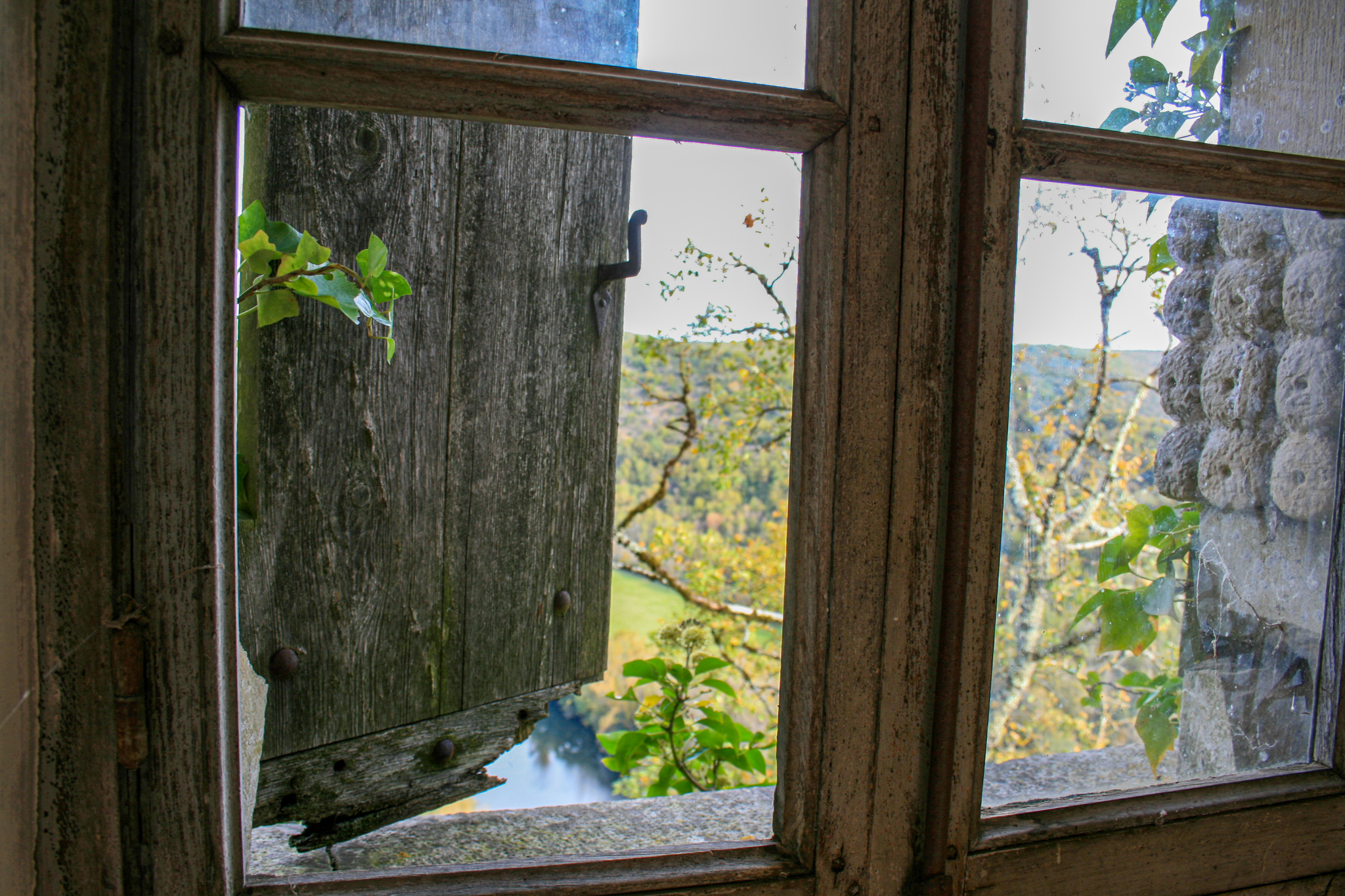 Our tour from room to room took us through different centuries. We found a medieval chapel with a gallery on one side, discrete, somehow private and peaceful. This later became a kitchen – an incongruous transformation. 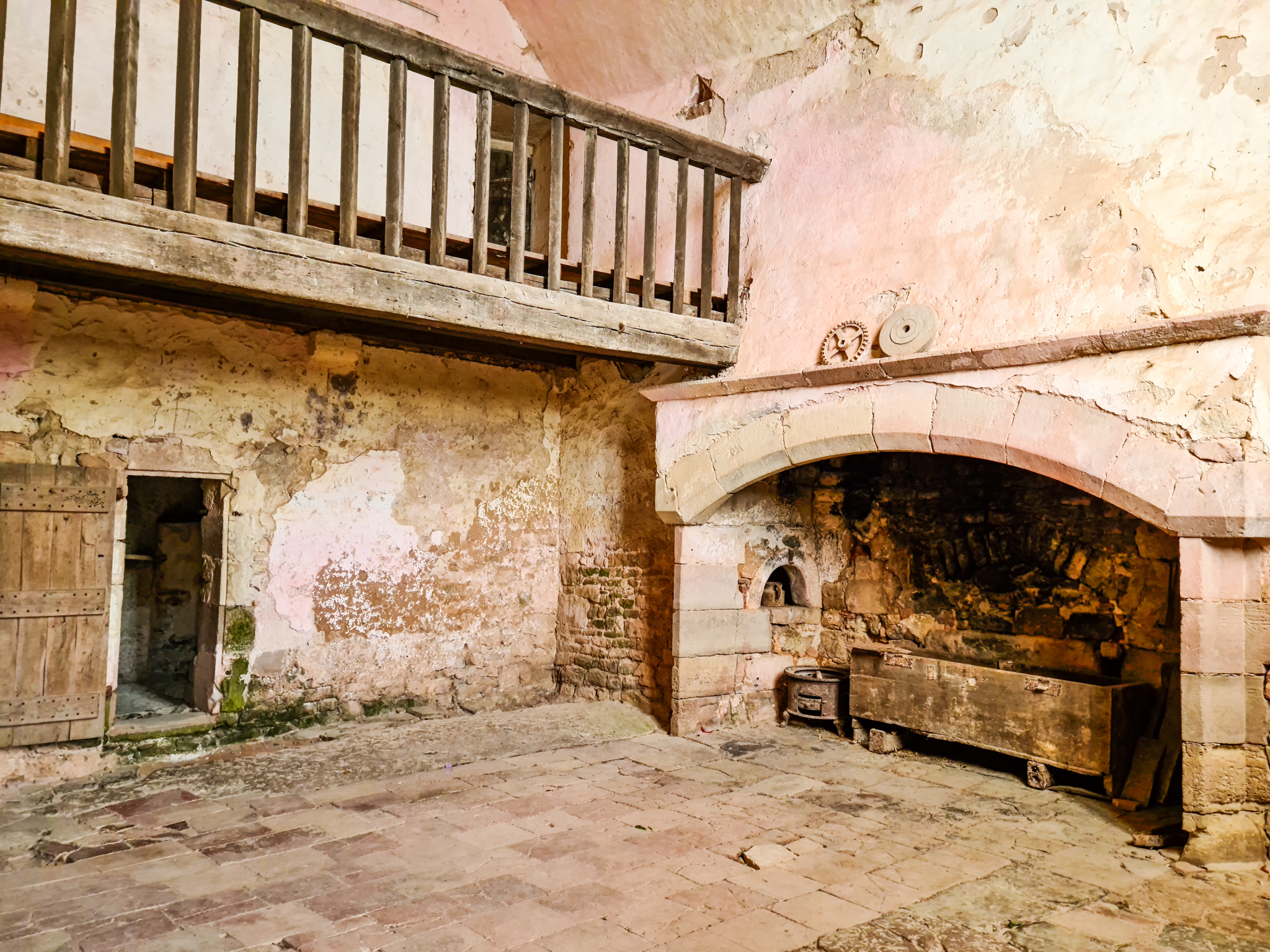 A side door took us out onto a stone terrace. Looking over the top isn’t for the faint-hearted. The sheer drop to ground level is 90 metres (295 feet). There doesn’t seem to be much in between. 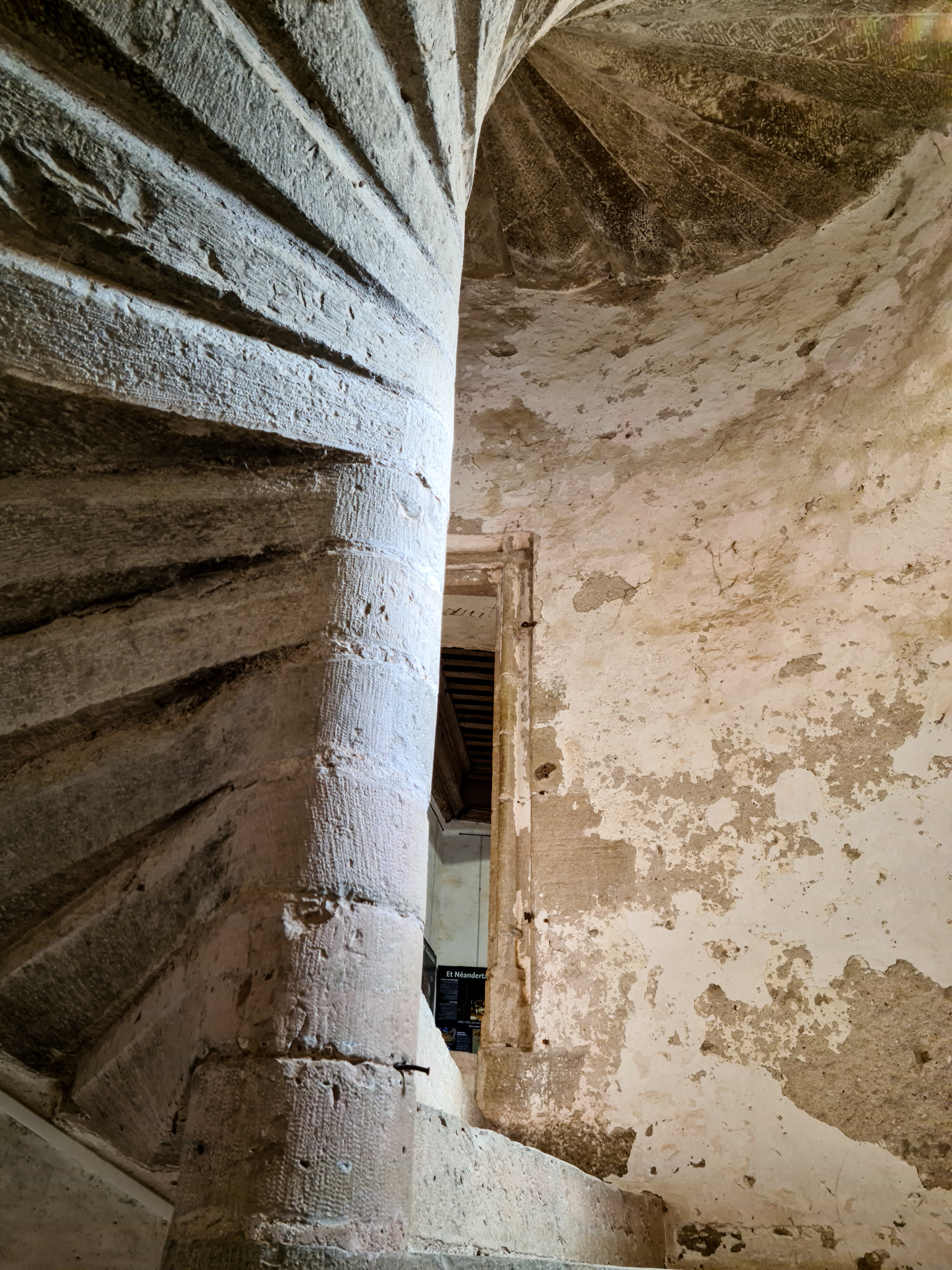 Back inside, we rounded another tight corner to face another spiral staircase. I was intrigued.

“Um, no, don’t think so, but it needs to be checked out. You never know, there might be a machine down there to thrill you.”

“Unlikely. Ah, the sign you have just ignored says it’s a bread oven. Hey ho, on my way. There might be an ageing sandwich lurking. I’m starving.”

The small room was half-filled by a kiln-like structure, which looked like a pizza oven. Its interior followed the interminably winding staircase and must have offered welcome warmth to the adjacent area. 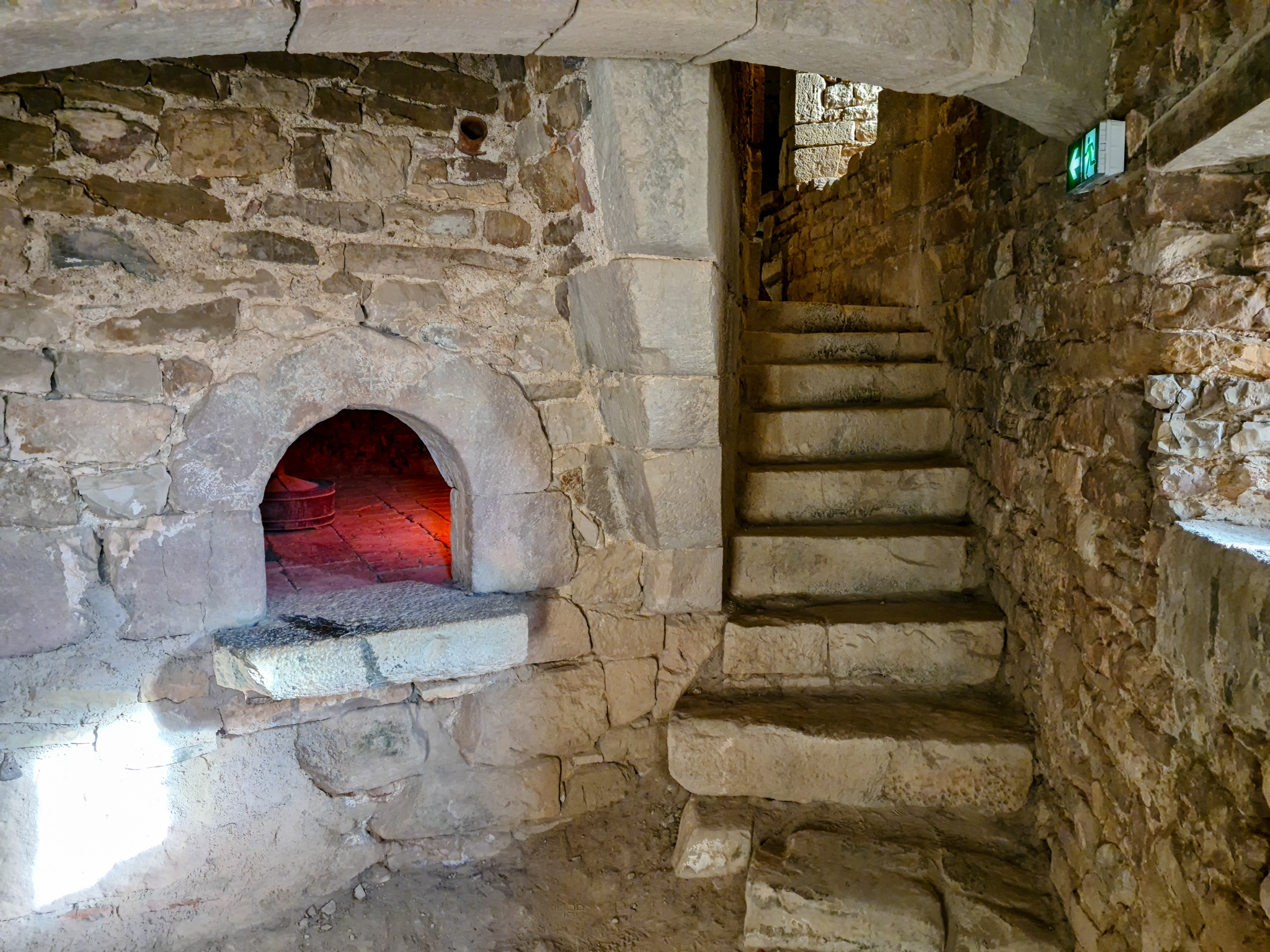 We clambered back up the steps and continued to an area filled with exhibits that were so old they predated the buildings. Finally, Jack’s interest was piqued. First, we watched a short film about La Grotte de Bruniquel. Inside the nearby Bruniquel Cave, human constructions made 176,000 years ago have been discovered, shattering previous scientific knowledge on the subject. The theory that the site could be a place of worship created by Neanderthals is causing much current debate. (I’ve included a link below if you’d like to learn more.)

Another room housed a display of ancient artefacts discovered at the foot of the castles. We examined the samples of tools, weapons, including spears and daggers, and wall art, all of which came from a prehistoric encampment. 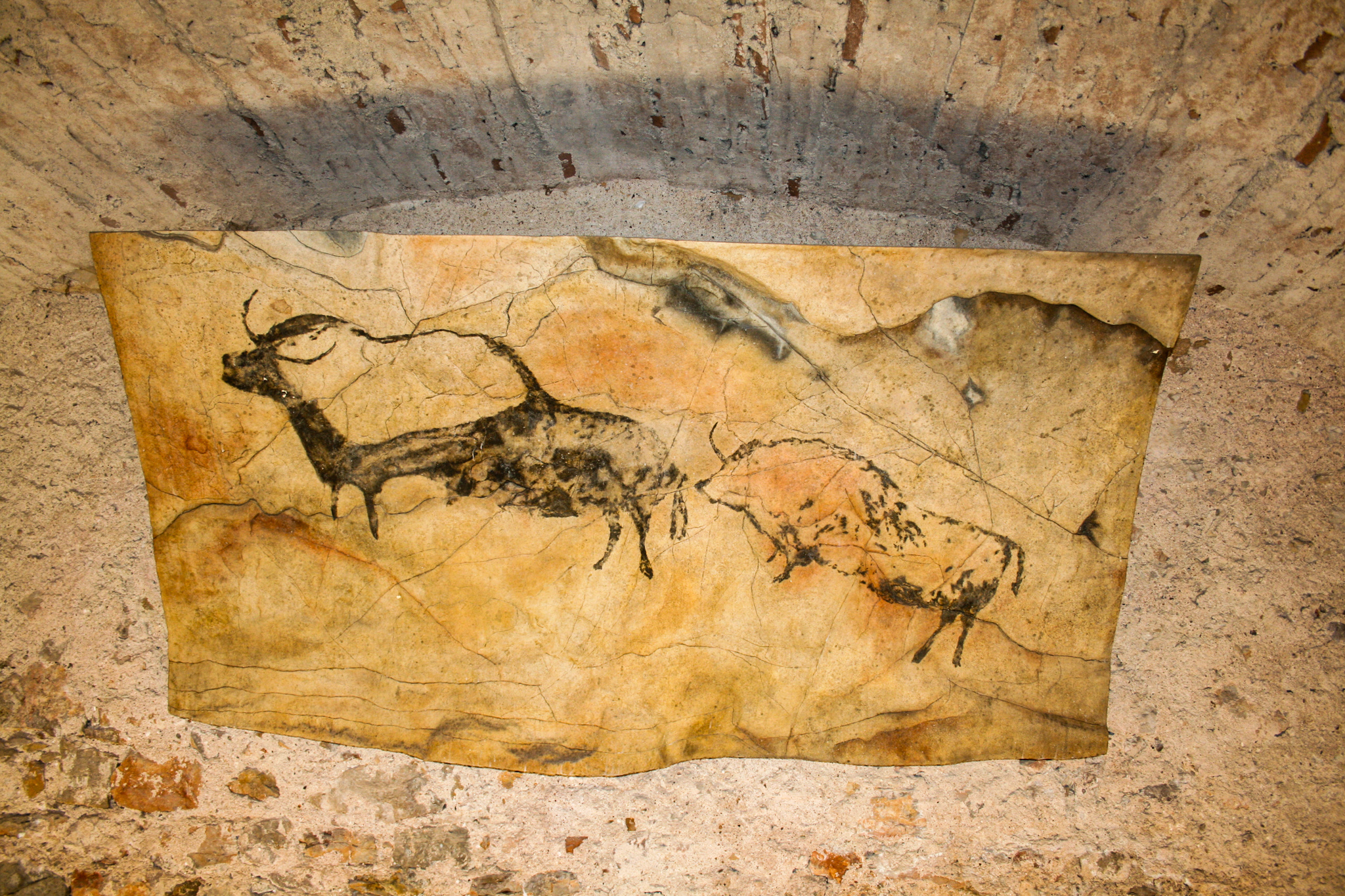 For me, there was a far more poignant exhibit. It was the near-perfect skeleton of a woman from the Magdalenian period. She lived approximately 11,000 years ago. It was moving to read that the remains of a two or three-year-old child were found nearby. Were they mother and child? I expect so. 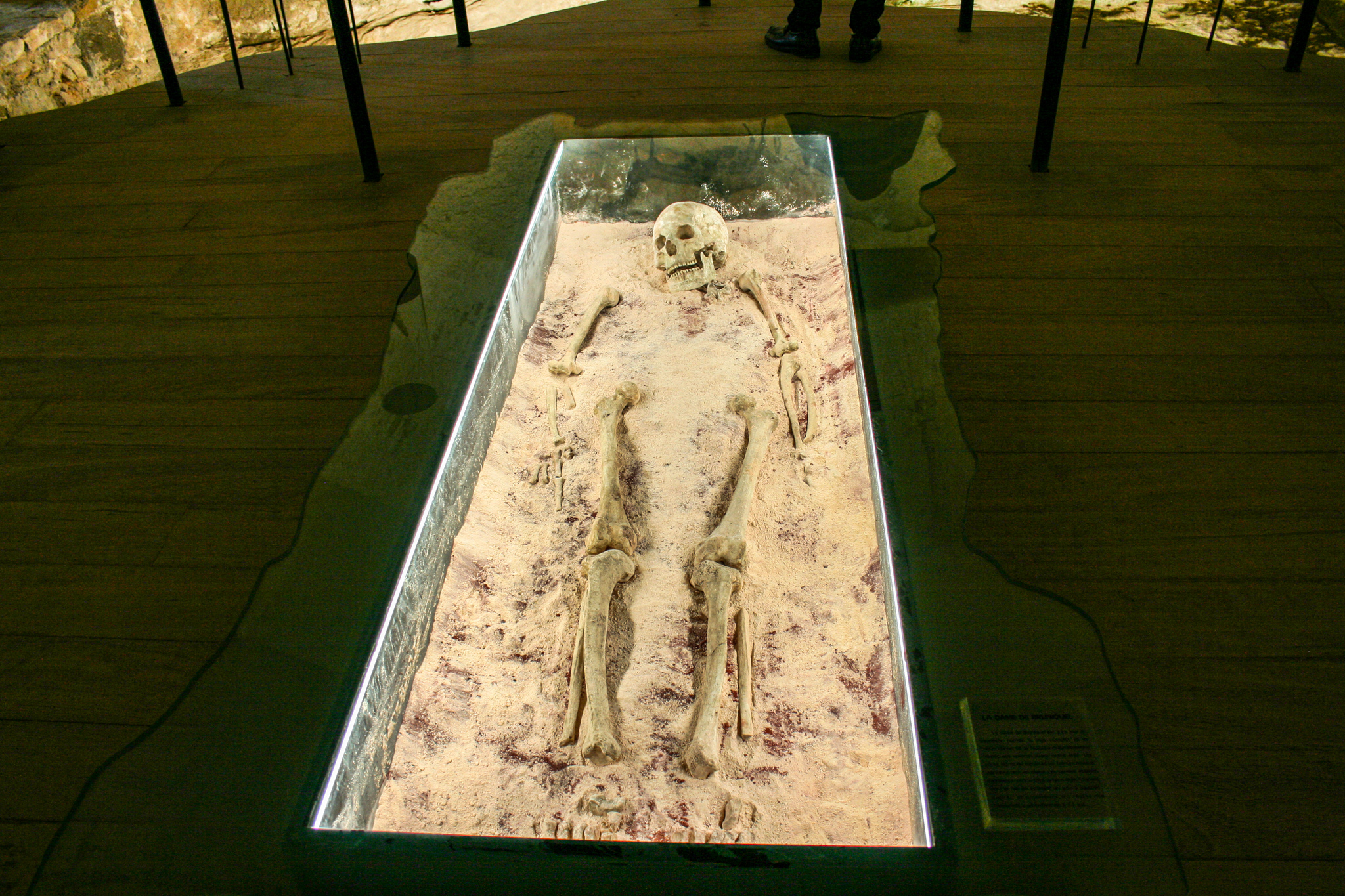 The centuries passed in a flash as we walked into a room from a later epoch. Our visit was perfectly timed. First refurbished in the 17th century, a new round of restorative work was underway. Surrounded by paint pots, an expert applied dainty dabs and brush strokes to this splendid ceremonial room. 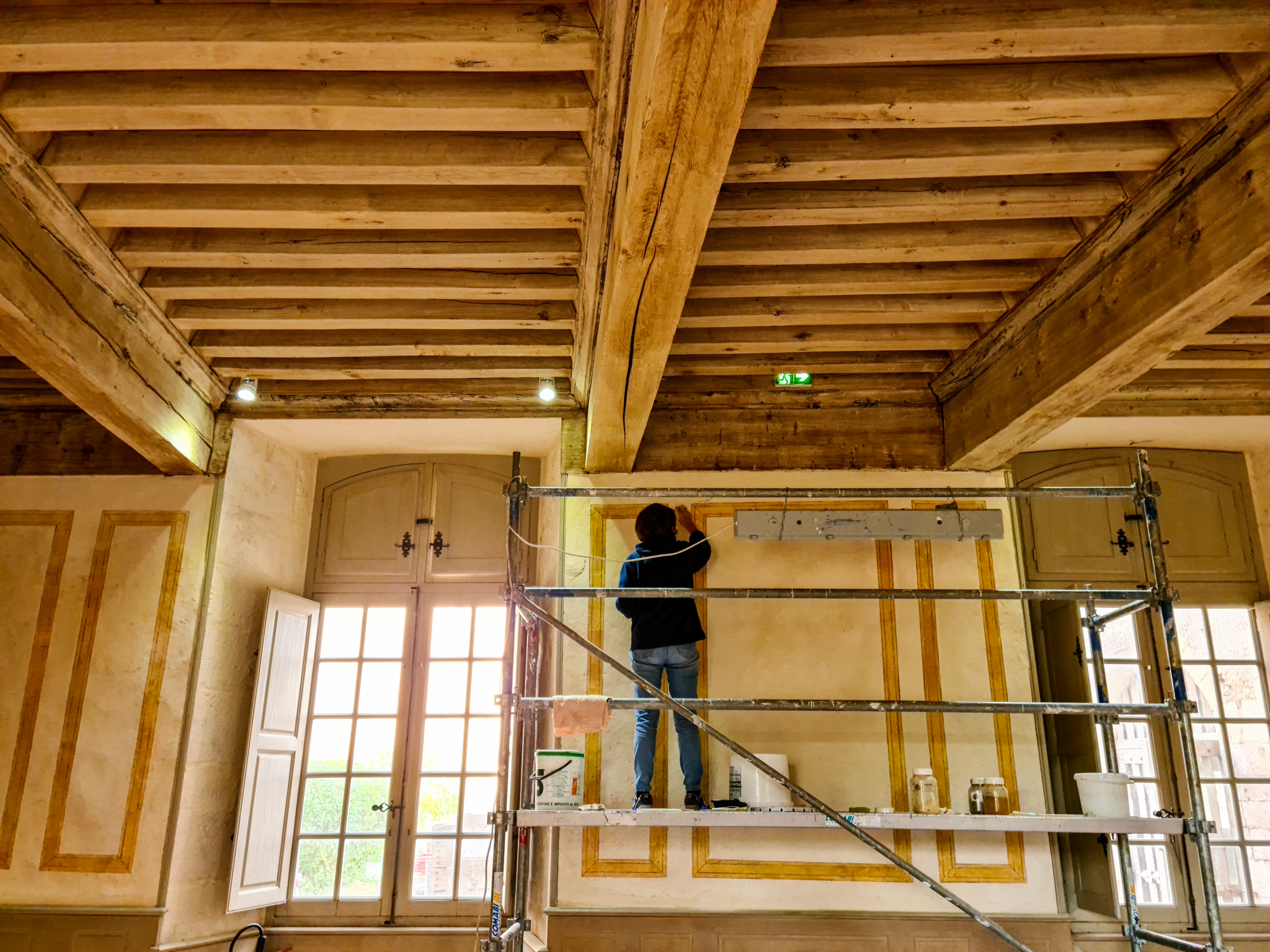 We paused to watch the artisan, totally absorbed, working on the interior panels. What fascinating work it must be. But for us, the greatest wow factor was the fireplace surround. Newly returned to its former glory, the intricate wood-carved design was outstanding. 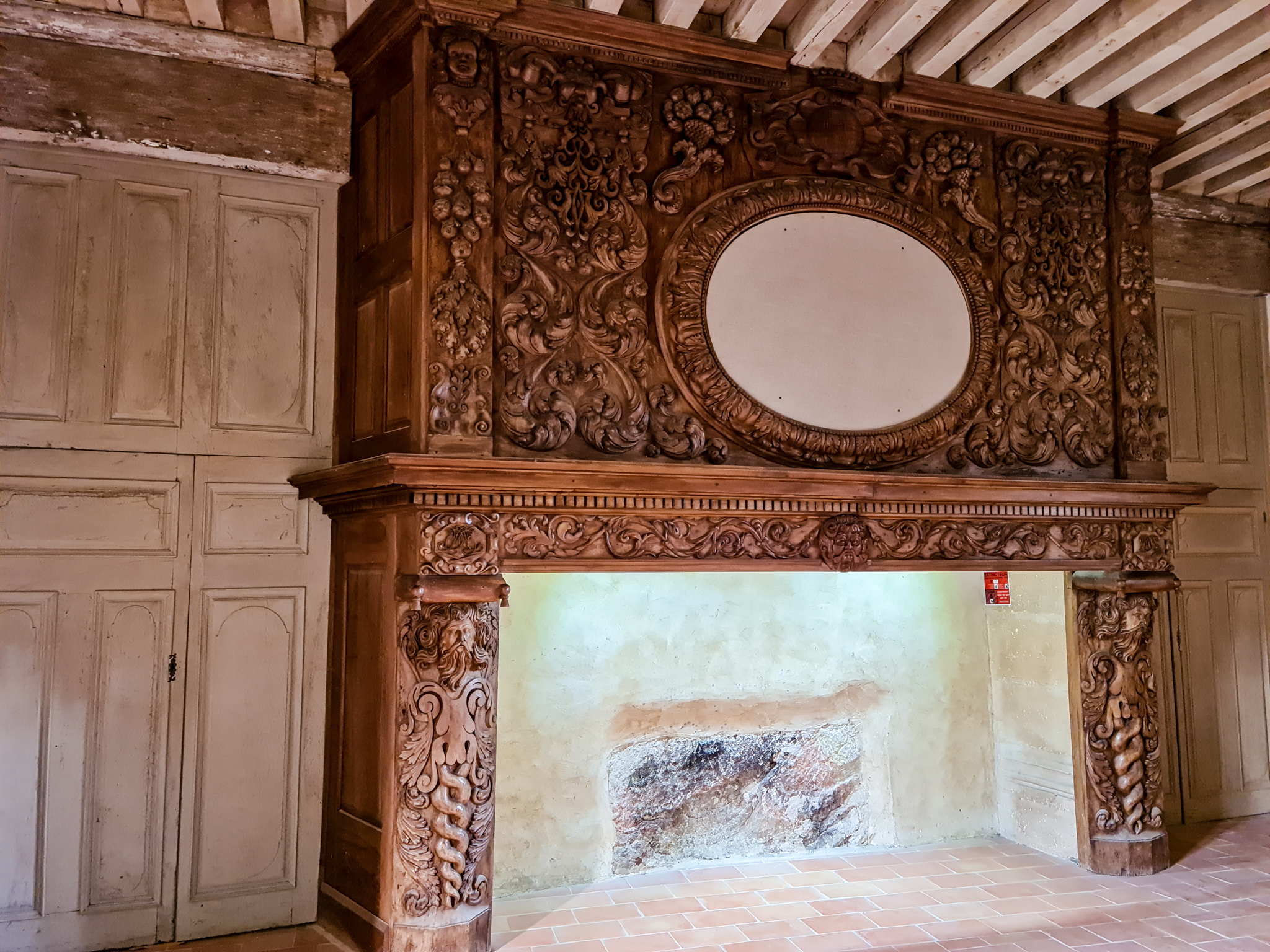 Leaving the lady to her detailed work, we wandered through to the belvedere. This stunning gallery offered far-reaching views across the countryside. (I have merged two photos here to give you an idea of the view.) My mind boggled as I imagined castle family members taking the air – or quarrelling as they promenaded high above in the safety of their home. 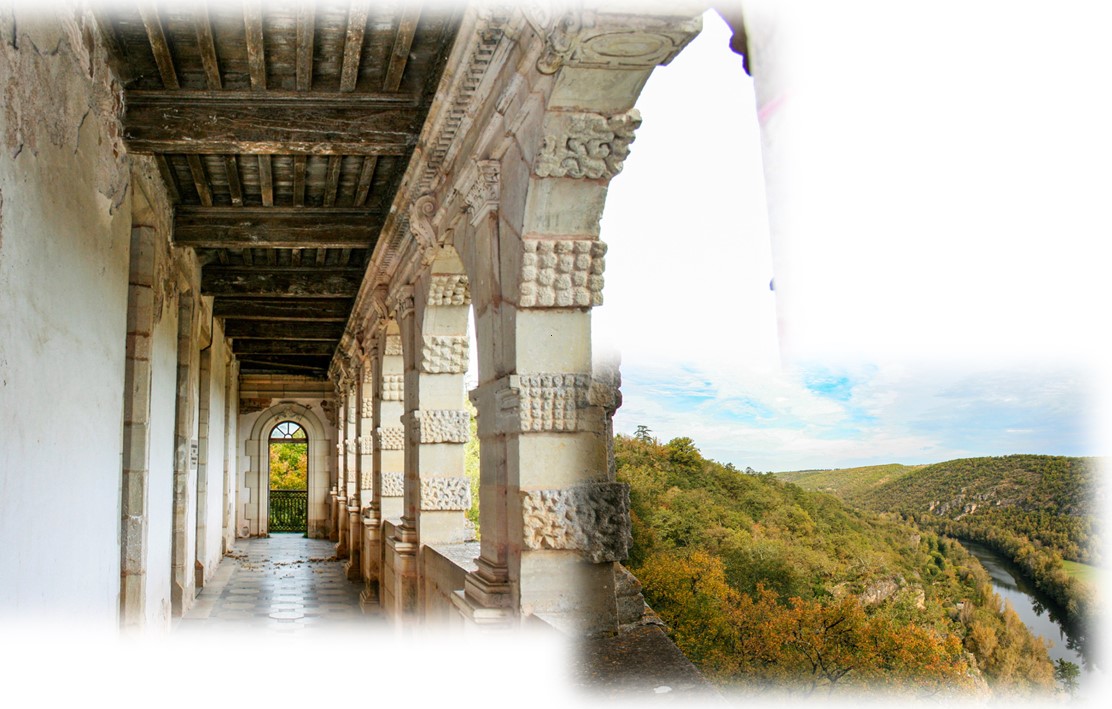 Aside from pausing to examine details, most of our tour had involved walking upstairs, downstairs, through dark passageways and onto grand balconies. It really is a warren. By the time we returned to the ground level, I was trying to determine which bits belonged to which castle when Jack called me.

“You didn’t tell me a wartime film was made here.”

Jack has an encyclopaedic knowledge about wars, especially the Second World War. If there were anything that would cheer him up, it would be this. 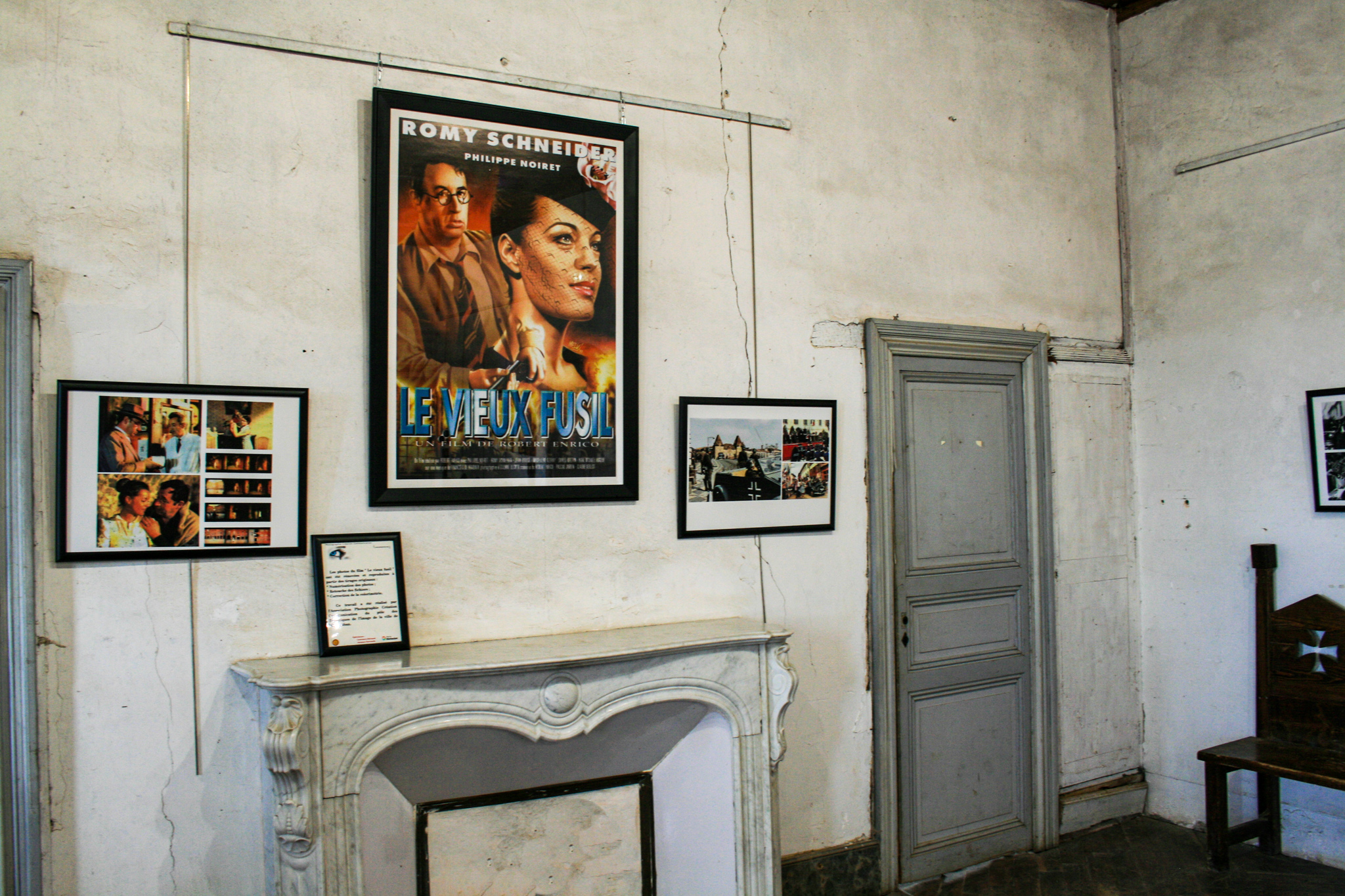 We read the gritty wartime drama’s synopsis. Le Vieux Fusil (The Old Gun) tells the story of a French doctor avenging the deaths of his wife and daughter, who the Nazis have murdered. Played out in the corridors and environs of the castles, it must have been an extraordinary filming experience.

I left Jack to mull over the information and walked outside to view the exteriors of the two buildings. They really are very close together. And those turrets. Not many, but still magnificent. 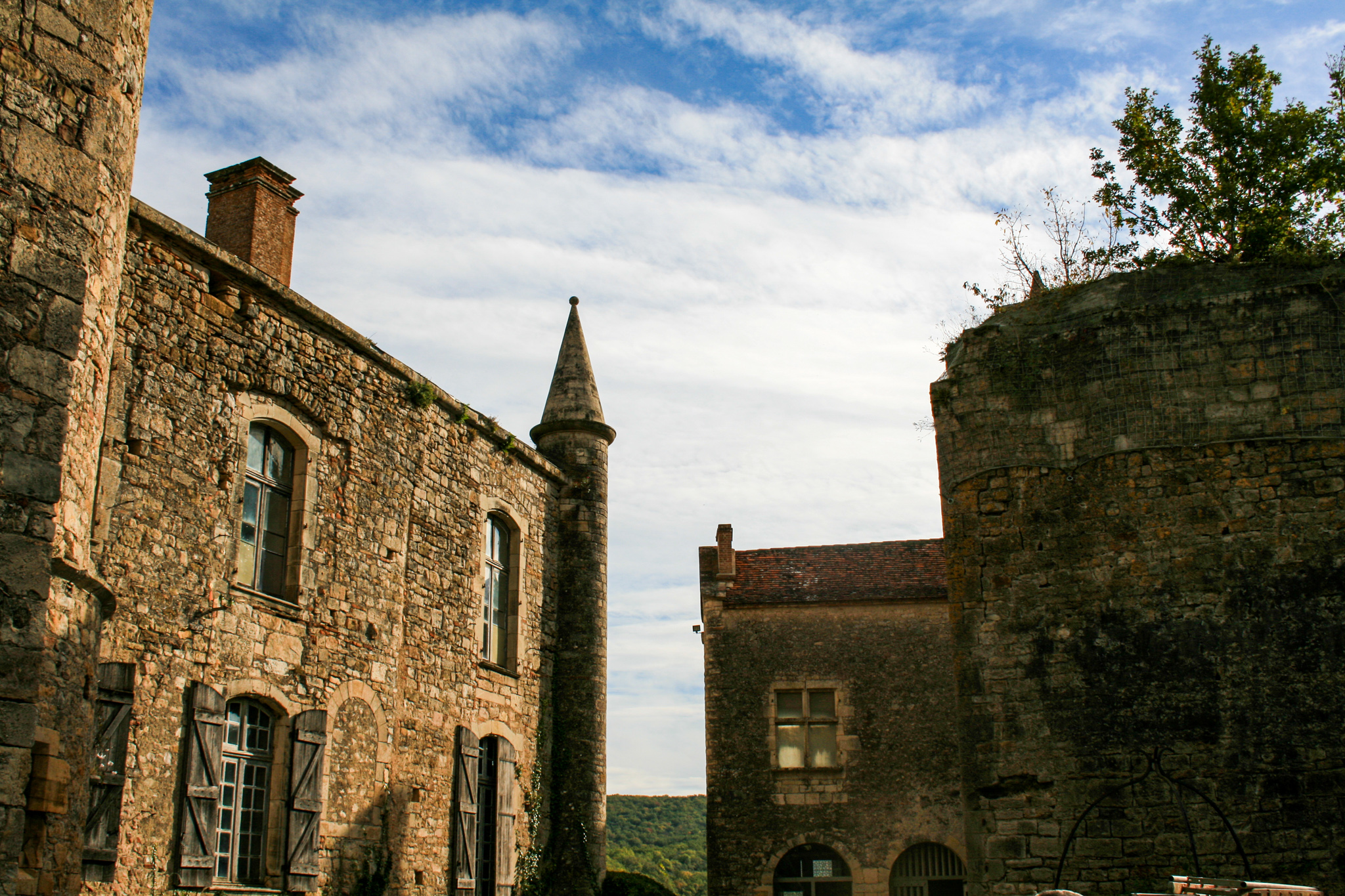 I checked out the medieval Knight’s Hall with its geminated windows, looking for signs of damage from attacks during the family feuds. It is more of a shell now. Nevertheless, it retains enough indications to show that it was once a remarkable building. 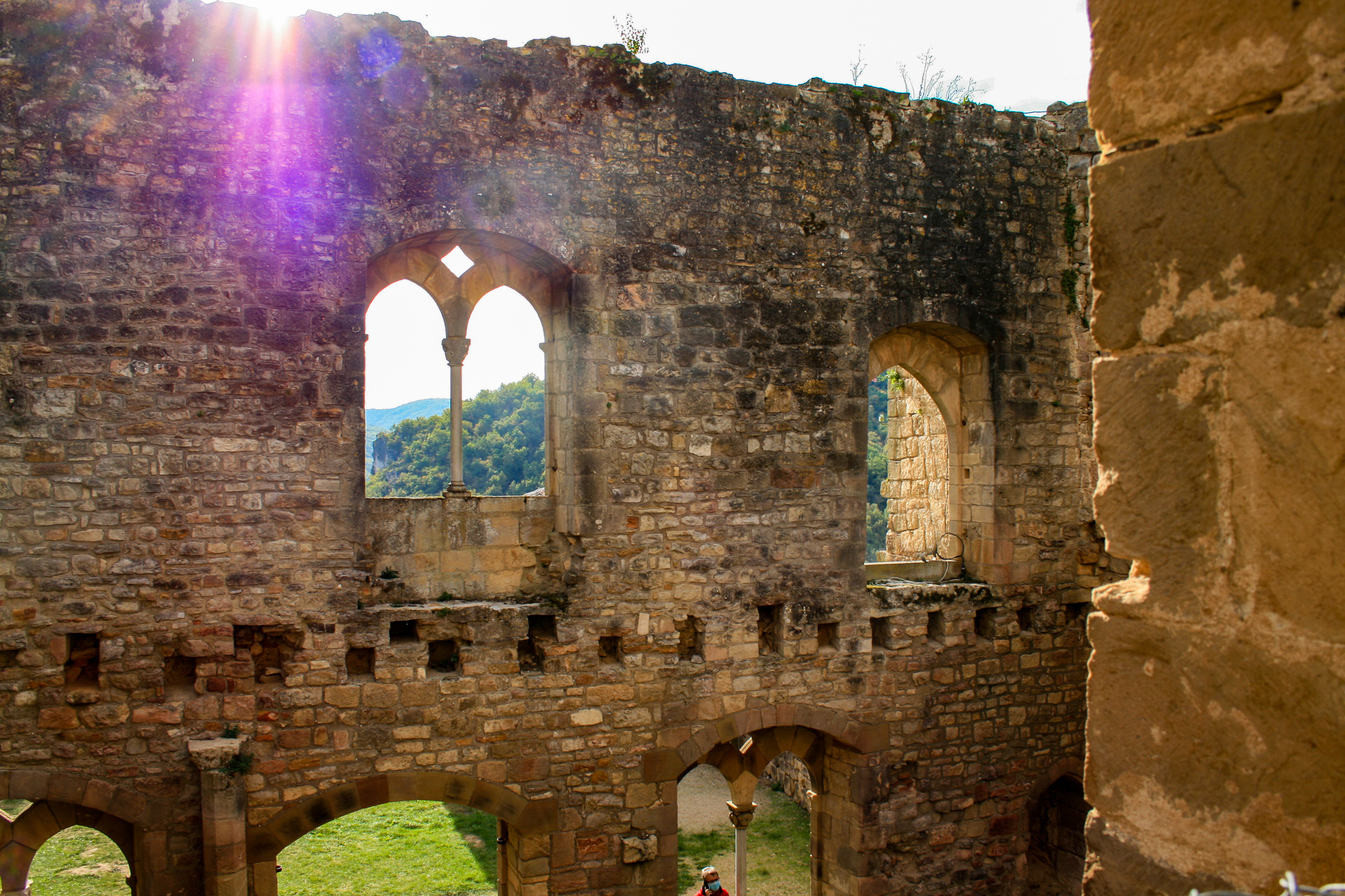 Jack joined me to take one final look over the edge of the Young castle’s boundary wall. Our view was towards the confluence of the Rivers Aveyron and Vere. Jack shook his head.

“That too, I expect, but look at this drop. The Young castle really was built on the edge of this precipice!” 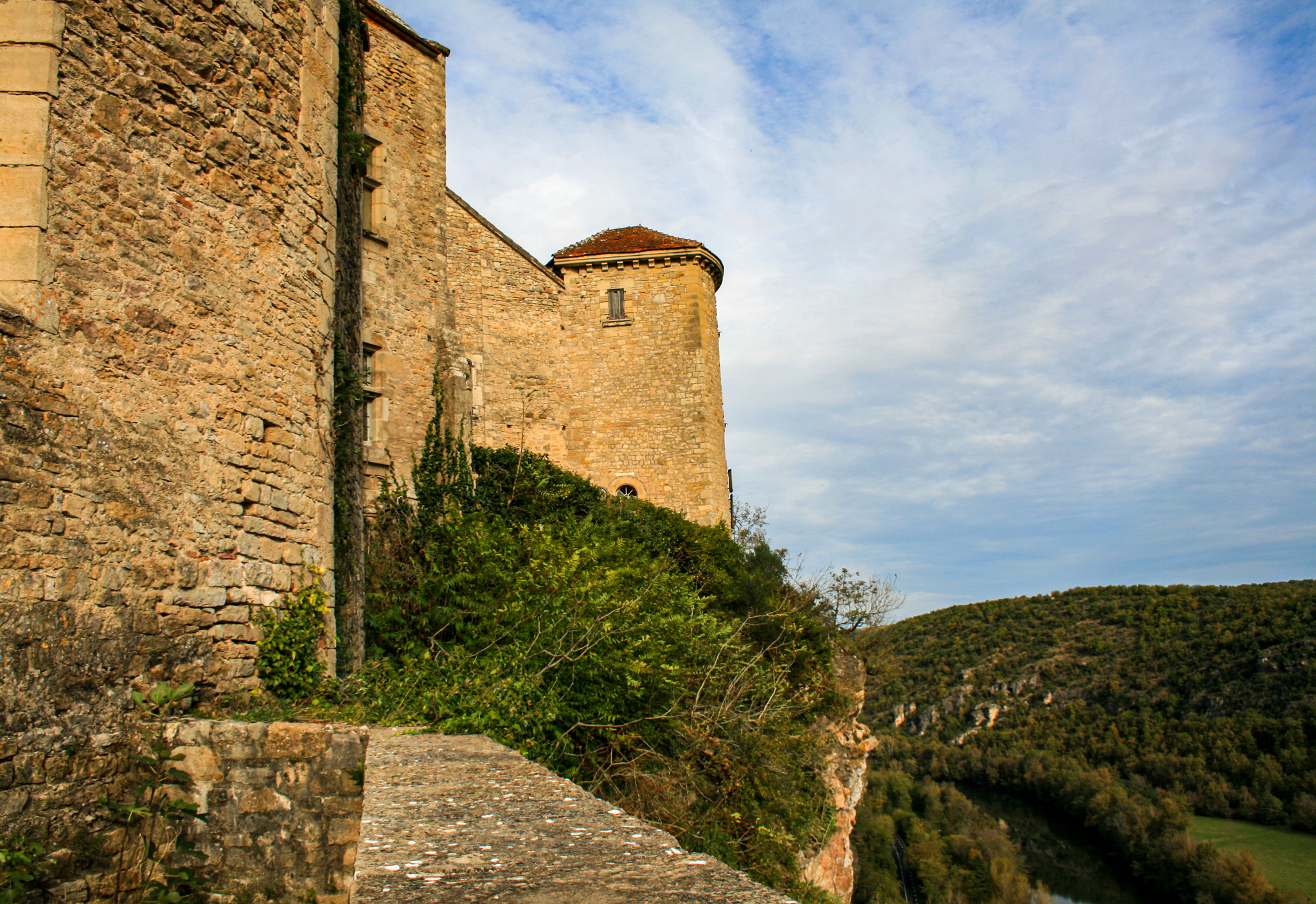 It had been another wonderful castle visit with lots of surprises and so much to learn, even for Jack. We drove back down the hill, past the tiny village, sneaking a peek at its ribbon-like streets. Once upon a time, it was a flourishing merchant city where hemp, flax and saffron were traded. Now it was filled with gentlefolk who just love their homes. 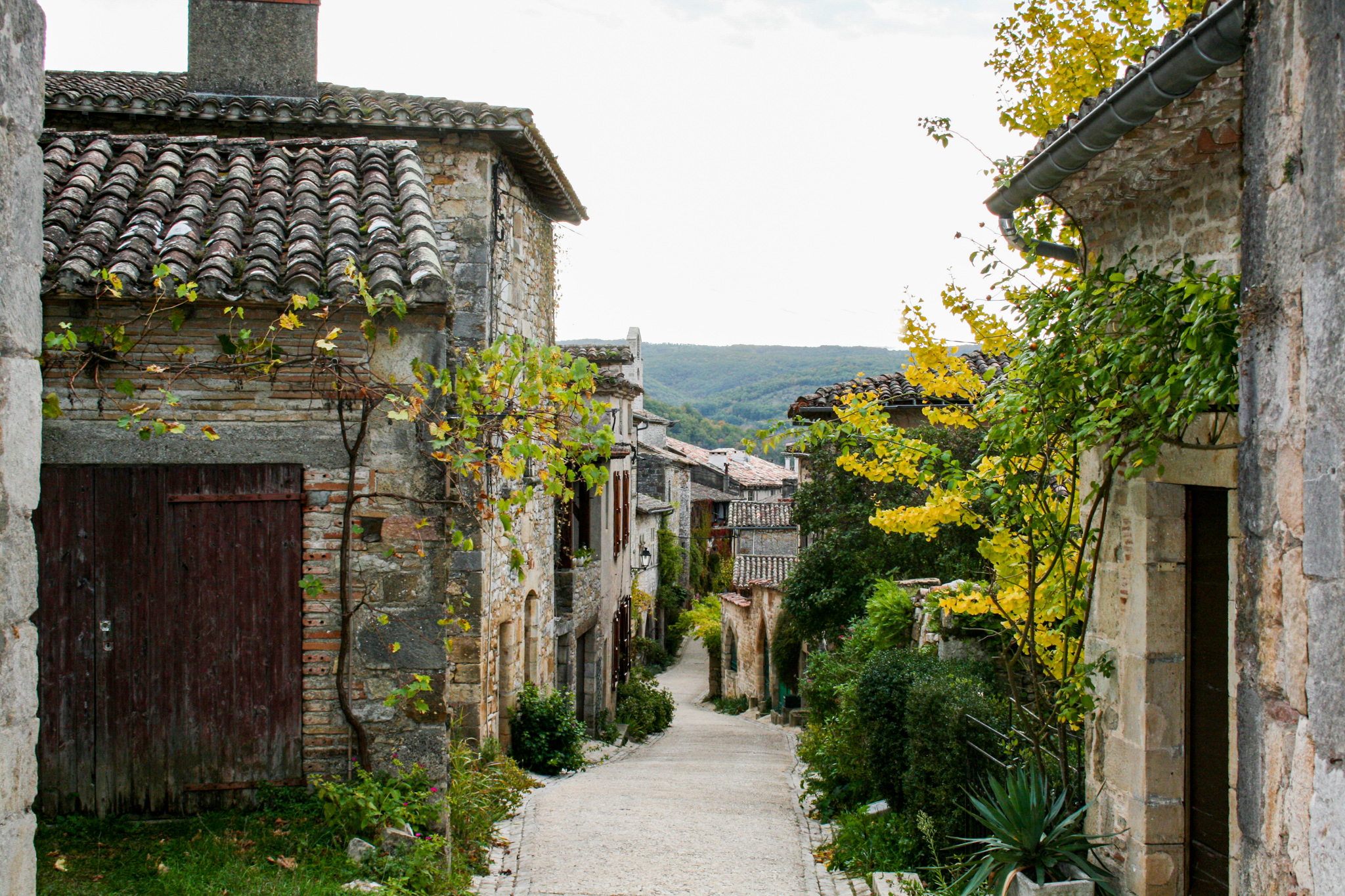 Having humoured me so far, I decide not to suggest to my long-suffering husband that we have a quick mosey into the village centre. That would be another treat for another day. 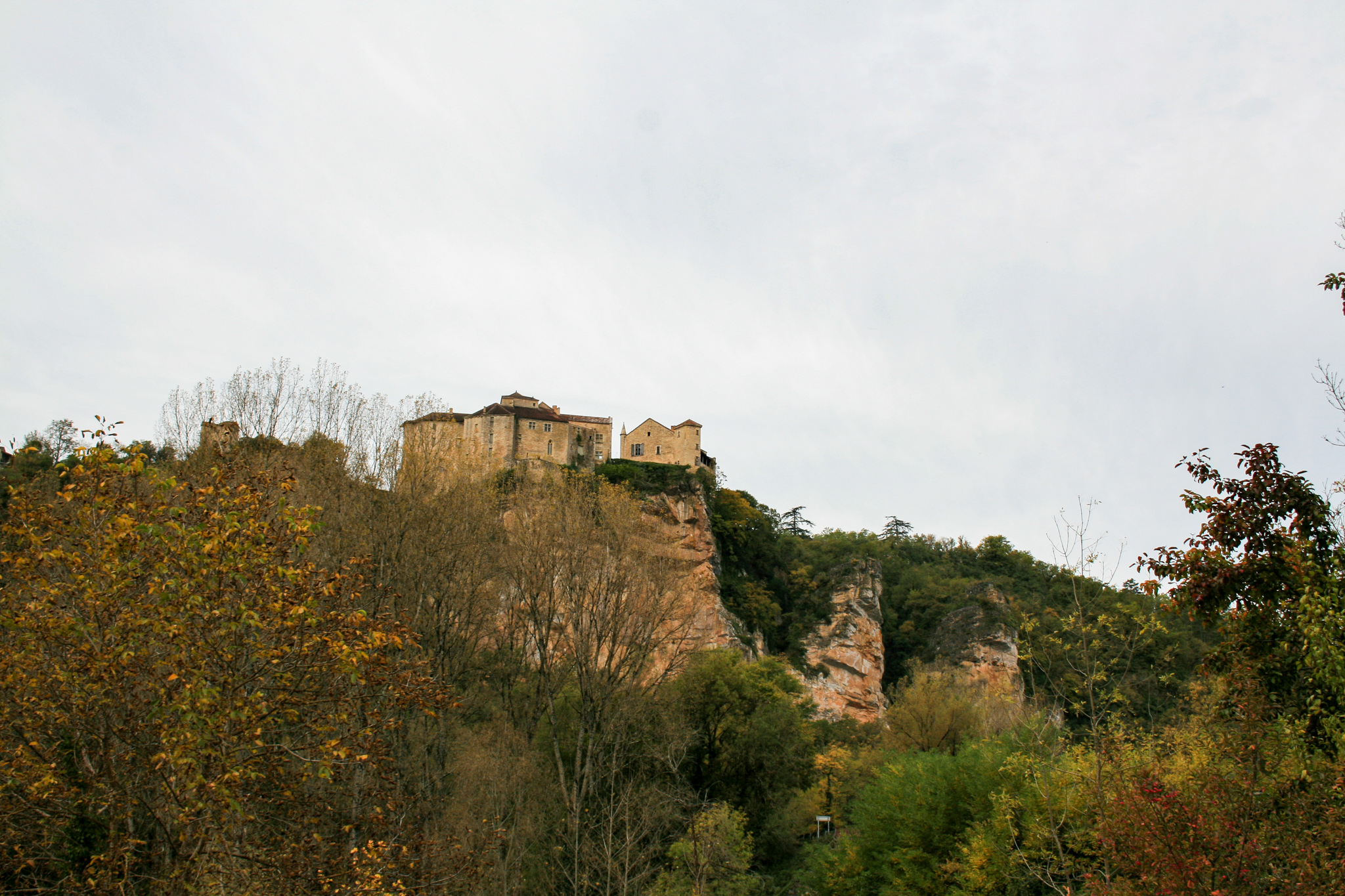