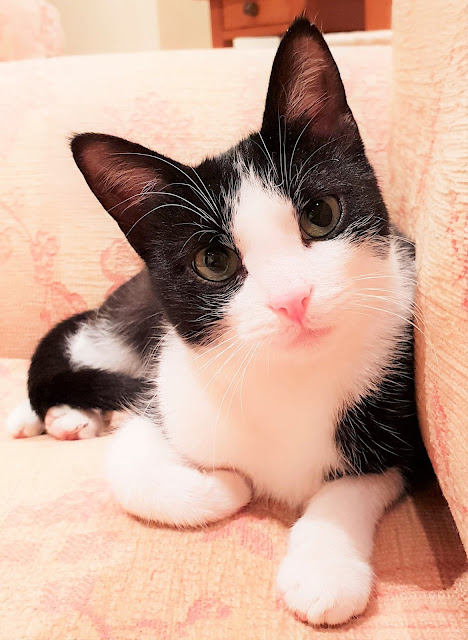 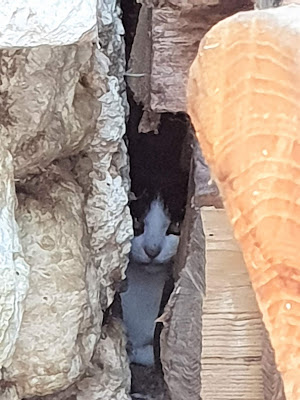 Early one morning we heard pitiful meows in the garden. Real gut-wrenching mews. We went out to explore and found a scrawny-looking black and white Felix cat clinging to the top of a spindly tree. Jack, my husband (wannabe animal-hater – not) sighed, he knew what to do. Off he went, grumbling about the general dimness of animals, to collect his longest ladder.
Unfortunately for him, the tree was inconveniently growing on the edge of the moat, so positioning the ladder was tricky. And precarious. Nevertheless, he climbed up to rescue the howling moggy, who decided it wasn’t so keen on being rescued after all. A short tussle ensued, more swearing, followed by success. Any thanks from the stuck one? Noooo. After un-stapling itself from his chest, the skinny survivor fled into the forest. And that was that. Or so we thought.
A couple of days later Jack heard plaintive mewing behind the woodpile. We peered into the tiny gap between the logs and wall, and sure enough, those same gorgeous golden eyes stared back.
At this stage, we were unsure whether it was a feral or abandoned kitten. Two things were certain: it was terrified and horribly emaciated. We put out food and returned to the house to watch from our security camera screen. After a few minutes, there was a furtive movement. One tentative paw at a time, it crept out. The youngster gobbled up every scrap and quickly reversed back to its nook. 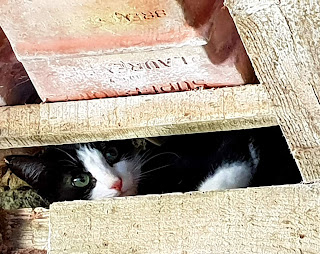 We continued our routine for a few days, chatting to the crying woodpile, or rafters, never getting any closer to catching it. Nonetheless, we were hooked. Those mews coming from that scruffy cutie were so sad, we were determined to try and help. Finally, enough was enough. We would carry on feeding it, but if it was a feral cat the least we could do was have it neutered.
Capture was much easier than expected. All it took was a bowl of food in the box trap and leaving it in peace. Ten minutes later our quarry was in. I whisked the panicking little one to the vet who performed surgery that day.
I returned to be told we had a young female – with a great pair of lungs! Shouting above the din, the vet estimated her age at about six months old and although pretty wild, she had probably been abandoned. We live in the middle of nowhere, so if that were the case, she must have been dumped. I looked at the vulnerable mite, just skin and bones and covered in fleas. The very thought of it was awful. If the vet’s theory was correct, she must have been living rough for a while and didn’t look equipped with the energy to continue much longer. 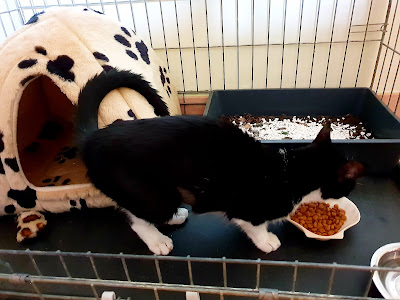 The vet supplied flea and worming meds and advised us to keep her away from our other animals until she had recovered from the trauma of surgery and capture. We set up a dog cage with a kitten igloo in the corner of our least-used room and opened the door. She plunged into the dark cocoon and wrapped herself into a ball. 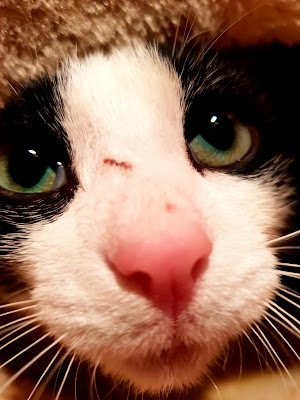 Every day we stroked her, trying to win her confidence. She never fought or hissed, but was dead scared, especially of Jack. We wondered whether she had ever been struck by a man. We’ll never know, but the sight of her cowering was heart-rending. 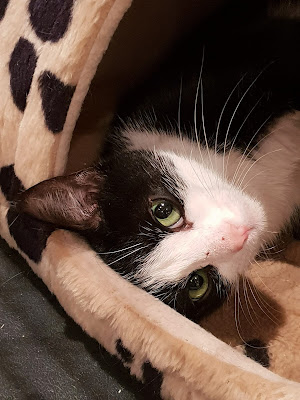 By the fifth day, something magical happened. As I was stroking the side of her head, she looked steadily at me, pressed against my hand, rolled on her side and began to purr. A deep emotion-filled thrumble. Our damaged youngster had turned a corner.
But there was still a problem with Jack. She was so scared. He (you know, the animal-hater) spent hours with her. He fed her, yakked to her about world events…as you do, always gently stroking her. Although still nervous and very head shy, she gradually started to realise he wasn’t going to mistreat her. His patience was beginning to pay off. 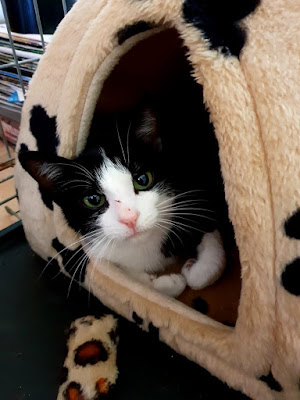 Very quickly she grabbed our hearts and needed a name. We’ve always lumbered our cats with epic names. We already have ex-feral gentle giant, Brutus, so she became Cleopatra. It seemed historically apt, well, nearly. 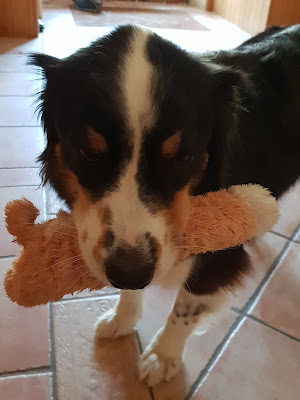 Next, our Australian Shepherd dogs wanted to be introduced. Aby took one look, sniffed, evidently considered Cleo unworthy of playing Frisbee, and wandered off. Max, on the other hand, wanted to share his fave toy with her. Under strict instructions not to bash her by accident, he was introduced. Strangely, they immediately got on well (including the presented toy), which further supported the idea that Cleo was not feral. Mind you, it could have been because she thought Max was a big version of her…same colours an’ all. Who knows? 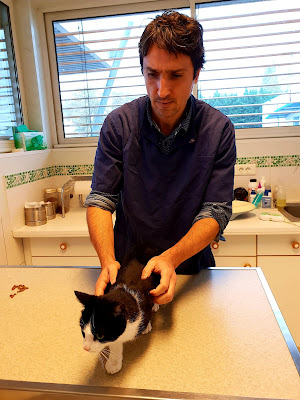 When her stitches were due to be removed, I took Cleo to see Dr Arnaud, our vet, to have a thorough health check and vaccination. First he double-checked for ID, but of course, there was nothing. Still skinny as can be, she weighed in at just under two kilos (four and a bit pounds). Aside from that, she was fit and well. Throughout the examination, she was gentle as can be, never fighting despite being wide-eyed with fear and a bit meowy. I left with the confidence that we were doing the right thing. 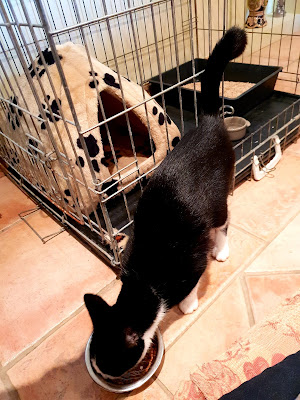 With a clean bill of health, we could open the cage door. It took a few days for her to come out, but she made it, only to develop a new problem which sent her back into hiding. One morning a big lump appeared on one of Cleo’s hips. She was very sensitive to it being touched and stopped eating. So guess what? Another trip to the vets.
Back we went to be told the lump, now half the size of a golf ball was an abscess. It was likely to have been caused by a foreign body in her system, possibly a splinter which had worked its way out. No wonder she had been so sore! The swelling was drained, Cleo was given an antibiotic injection, and we left loaded with yet more meds.
Back at home and Cleo coped with her tablets brilliantly, and quickly regained her health. Her coat began to shine, and she allowed us to stroke her all over.
Cleo’s next socialising encounter, the biggest challenge yet, was with Brutus, our tabby cat. 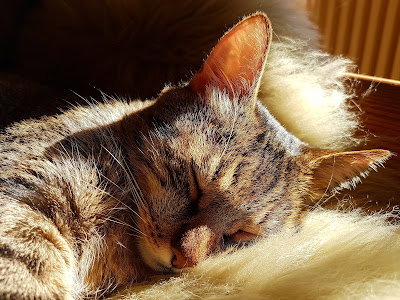 Brutus may be huge and look ferocious, but he is a great big fluffy wuss. At first, he was terrified of her. Giving us filthy looks, he refused to go into Cleo’s room and growled from afar. For her part, Cleo cowered in her igloo, hissing and spitting at the sight of a monster moggy at least three times her size. And who could blame her? 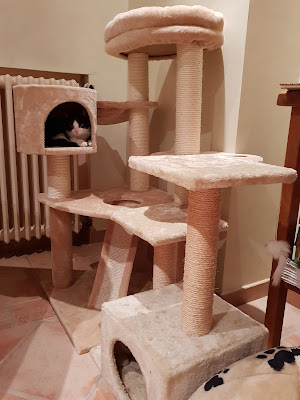 Progress since then has been slow but sure. Cleo eventually plucked up the courage to venture out of her secure cage. We took it down and replaced it with a small cat tree in a different part of the room next to her igloo. She loved it so much I bought her a bigger version. She must have thought I was bonkers the day I built it – as a matter of fact, Jack did too. After a couple of days staring at it owl-eyed, Cleo coyly started testing new soft textures, new hidey-holes and chunkier scratch posts. Apparently, they were all fab.
Next came toys. Cleo obviously had no idea what they were all about. She looked quizzically at me when I swung the feathery, rattley ball, wondering what was going on. Shyly, she wound herself around a chair towards them. Then stopped. Curiosity got the better of her, and she started playing gently. Another mini-triumph. 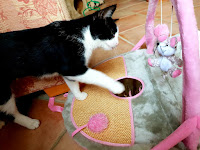 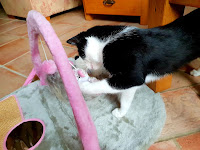 Cleo is now getting a bit bolder. She meows her head off for food, padding nervously into the hall when Jack comes to deliver it – along with current affairs updates. She still scares easily, although runs away less often when we approach her, and she loves our morning snuggles on my fleecy dressing gown. 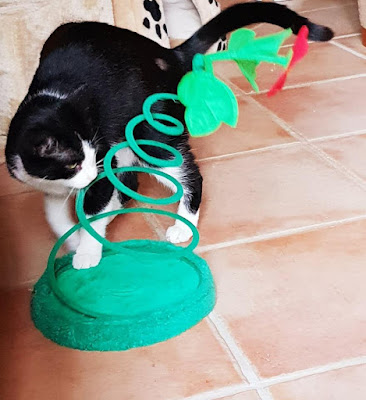 Cleo also loves the manky old sheepskin rug and settee to stretch out on. That girl eats three meals a day but still takes long and skinny to a whole new level. She and I have lots of cuddles, and despite everything we have put her through, is slowly discovering that humans can be nice after all. Animal-wise, she especially loves Max. He sits in front of her beaming as she swats him gently with kitten paws. 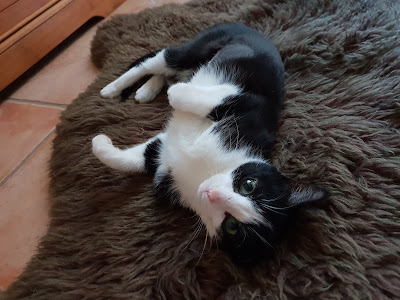 Things are calming down with Brutus too. Brutus has decided he’s not going to be savaged by a baby Amazon and regularly sits in Cleo’s room. He’s still getting hissed at, but we’re confident they’ll end up best of friends. Just last night they almost booped noses. Cleo withdrew at the last minute and spat, suddenly scared. Brutus didn’t flinch. He just sat and gave her one of his slow blinks. My heart melted. 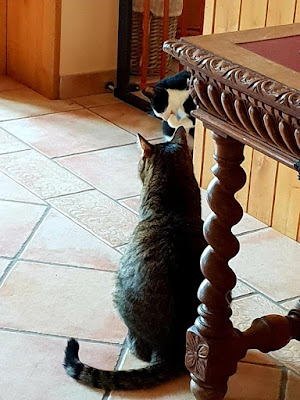 We’re now almost a month on from Cleo’s last vet visit and this week sees a return for her booster vaccination. Her next stage will be to pluck up courage to explore the house and join the rest of the family. She’s come so far so fast we’re sure that won’t be too long – although I suspect she won’t be testing the great outdoors for a while yet. 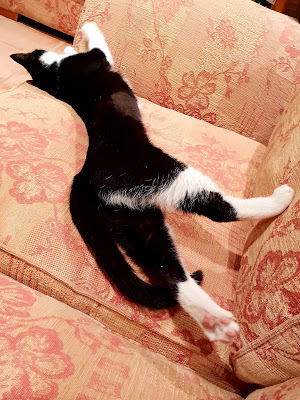 Our little golden-eyed girl is putting on a bit more weight every day, her fur is re-growing, and she is blossoming into a gorgeous feline beauty. We have no idea where she came from or what happened to her. All that matters is she needed our help, and we were happy to give it. Cleo is now a permanent member of the family, and we all adore her. 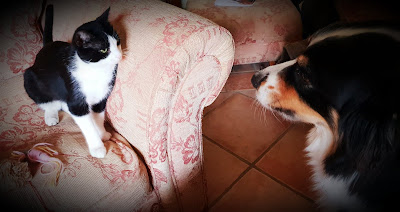