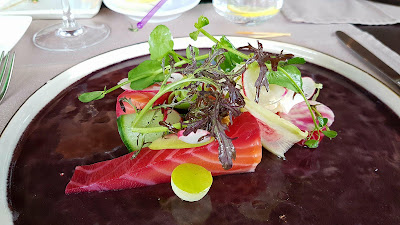 How I get myself suckered into these situations I shall never know, but they do seem to happen eerily often.

My sister, Di, admits to being a bit of a flibbertigibbet when it comes to shopping. She is apt to visit as many similar shops as possible on a compare-and-contrast mission before deciding that, actually, the item in shop number one was the best after all. I find it an exhausting process. What I hadn’t realised was that these tendencies extend to choosing hairdressers.
Since coming to live in France, she has tried several different salons with varying levels of success. Never truly happy until…
“Honestly, Beth, you haveto come to Salon Costeau, it’s brilliant.”
“I’m fine with the one I go to.”
“Really?” she replied, looking surprised, “I think you’d prefer this one. Go on. give it a try.”
“Oh, okay,” I groaned, swayed by her disconcerted look. “Where is it?”
“Montauban.”
“What? That’s miles away!” I exclaimed, sounding as staid as I presumably looked.
“Oh don’t be silly. It’s not that far. We can combine it with shopping.”
And that was it. An appointment was made with Claude.
Off we drove, passing through several towns peppered with hairdressers. Many tried, all rejected.

For the first timer, Montauban, the department capital for the Tarn et Garonne, has a certain stately wow-factor. Standing on the banks of the River Tarn at its confluence with the Tescou, it is an imposing medieval bastide town with romantic qualities. The reddish stone used for construction gives the city a soft, quixotic feel. I like it.
We entered via the Pont Vieux. Commissioned in 1304 by King Philip of France, the 205-metre long bridge took 30 years to complete. Its level surface, a rarity in the Middle Ages, is supported by seven magnificent arches. 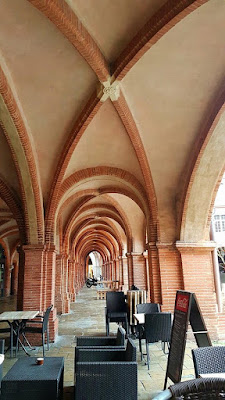 We headed for the centre. Like all medieval bastide towns, Montauban has a principal arcaded square. I always think this one is particularly dignified. Two layers of cloistered walkways line the perimeter, supporting red brick townhouses. French windows with filigree wrought iron balconies grace these splendid dwellings. Imagining great opulence behind the coquettish net curtains, I would love to peek inside one or two. 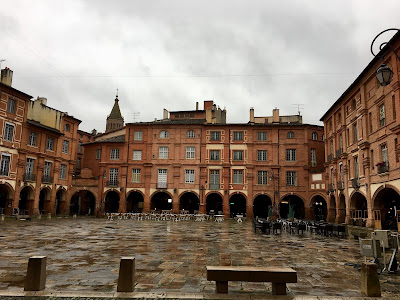 Cafés and restaurants are tucked under the complex tangle of arches, their tables spreading welcomingly onto the square. During the warm months, sunlight basks their clients in this romantic sun trap. Understandably, it is a lunch and dinner hotspot. 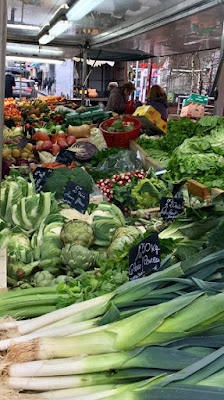 A greengrocer’s market stall was positioned on the side of our street. We paused, attracted equally by the sight of super-fresh veg, and the alluring aromas coming from the pâtisseriebehind. We decided to squeeze in a quick coffee and an inevitable cake. It’s obligatory in France. 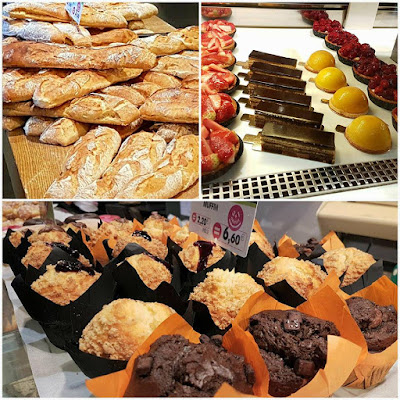 It turned out we weren’t the only ones with the same idea. A handbag-sized dog was sitting on the table next to ours, enjoying a crusty croissant with his elderly owner. Since nobody batted an eyelid we decided they must be regulars. 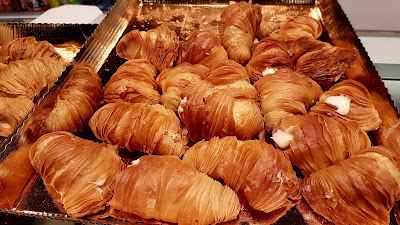 I dragged Di, kicking and screaming, past the Galeries Lafayette department store. Luckily our coffee break had used up our available shopping time. We arrived at the salon on time.
Claude was exactly how you might expect; a delightful gentleman who wore much more make-up than I. He was also a bit of a drama queen.
Everything might have been fine except that Claude had just returned from a styling course in Paris. He was dying to try out his new techniques, and sadly I was his first victim.
He gasped dramatically at my mundane locks. Pinching Di playfully on the arm, Claude told her he would sort everything out. Just in case my input was relevant, I made a plea for subtle highlights. He giggled at my outrageous idea and reached for his tube of chemicals.
Claude squirted a log of blueish paste on top of his hand. Demonstrating his new colouring technique, he smeared copious amounts of the clay-like substance onto hanks of my hair. It was a time-saving device if nothing else. There was nothing remotely subtle about this man, nor was there any downtime.
While my hair began to change colour, Claude busied himself by painting Di’s nails his latest favourite shade. He said they would go beautifully with the colour of her eyes, océan. This he followed-up with an interesting shade of green on her eyelids. Seaweed came to mind.
Meanwhile, my hair was apparently taking too long to change colour. Claude tutted irritably and grabbed an ultra-modern looking static hair dryer. While my ears cooked, he coyly offered to share his lunch with us. Despite refusing, we were given small pastry pillow cases filled with jam. It was a very kind gesture, which nicely diverted my attention from boiling ears and discouragingly blue hair.
Once cooked, Claude rushed me to the sink, simultaneously washing my hair and his sugar coated fingers. This man was efficiency itself. I was then told to stand in the middle of the salon to be cut.
Claude came at me with a razorblade. I won’t say I was unduly nervous, but it did strike me that scissors might have done just as well.
I stood stock still as he lashed around. Lock after lock fell. Di, who now had even darker green eyeliner on top of her eyeshadow, was looking distinctly anxious. This wasn’t a good sign.
Finally, I was allowed to sit to be dried and styled. I knew this wouldn’t take long – there wasn’t much hair left to dry. I studied the end result in the mirror. A pudding basin of tobacco-yellow striped hair and an extraordinarily straight fringe close to my hairline looked back. 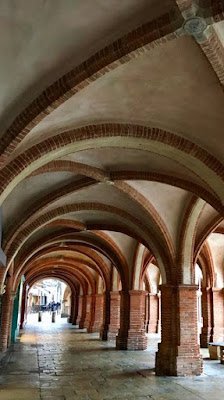 “Fancy lunch?” asked Di, hurriedly.
I nodded numbly, paid Claude, who was close to tears at our decision to leave, and followed her back the arcade.
“Here we go, this’ll cheer you up.”
“It’s just as well I’m not vain,” I grumped, sloping after her.
We walked through a passage into a tiny quadrangle. Ahead was a deliciously inviting eatery called Crumble Tea. Di beckoned me in. 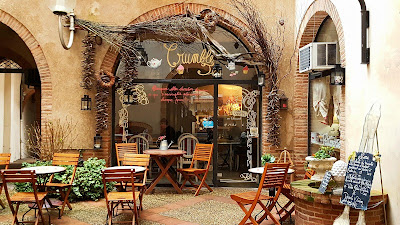 The interior was intimate. Tins of tea lined the walls, looking incongruously uniform next to the graceful arches and modern art. The dining area was filled with a hotchpotch of tables, cushioned chairs and cosy bench seats. It was just like home. 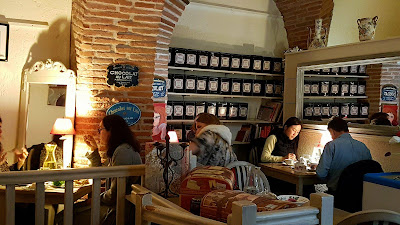 The proprietor, a petite lady, welcomed and directed us to a table lit with a cute chintz lamp. We settled down and listened to our three menu choices. Everything was homemade here, she said, describing each. I had no idea which of the mouth-watering options to go for, in the end plumping for onion soup, side salad and ham-filled croissant. We both did.
What an inspired choice!
Mammoth portions soon arrived. Everything was a taste sensation and especially the chunky soup. Smoked, caramelised onions in a broth laced with white wine and Cognac, the melted, toasted cheese on top made it a culinary triumph. Each mouthful yielded comfort, quickly putting my coiffure experiences into a proper perspective. 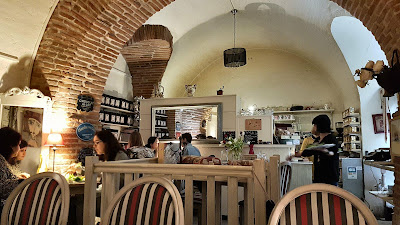 Despite being stuffed full, we decided there was just enough room to share a dessert. 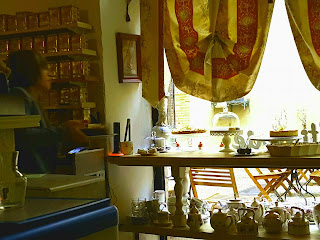 Madame reappeared to tickle our taste buds with her list of puds. Again, agonisingly difficult though it was, the complicated sounding sponge cake with several different fruits inside was the clincher. We munched our ways through, washing each delectable mouthful down with a sip of exotic tea. What a treasure this place was.
Still remarking at the impossibly large quantity of fruit that had been crammed into the dreamy dessert, we paid our bill, thanked madame and waddled out.
But Di still had one more treat up her sleeve.
“Come on, we’ll go back this way.” 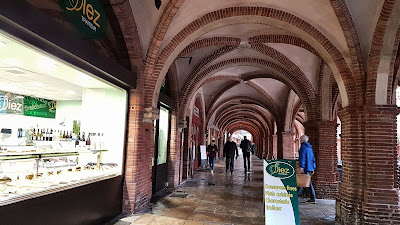 We entered a different section of ancient arches, treading over more centuries-old bevelled flag stones and came to a shop. Talk about extravagant. It was obvious what was sold here. Plants. 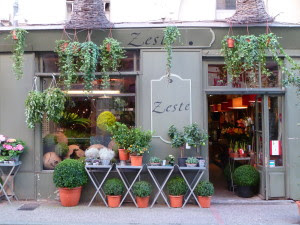 Just like the restaurant, inside it was small and intimate. Only this time it was festooned with healthy plants, flowers and objets d’art. I looked around, imbued with gloriously conflicting scents, for once happy to join in the browsing. It was heavenly. 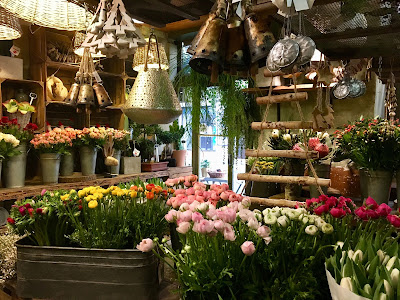 We reluctantly tore ourselves away with plants purchased and headed home. We giggled at our unusual looks, contenting ourselves that my hair would eventually grow back, and Di’s mermaid look was easily dealt with by gallons of make-up remover. 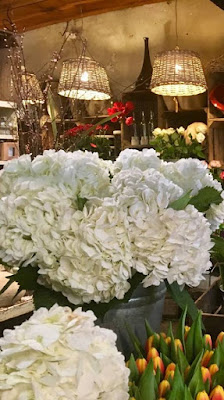 We agreed that Claude had been a true gentleman, and couldn’t possibly have showered any more attention upon us. Sadly, though, Di’s latest salon was about to join the others, but not her choice of florist or lunch venue. There was no doubt about it, we would return at the earliest opportunity for another fancy lunch. 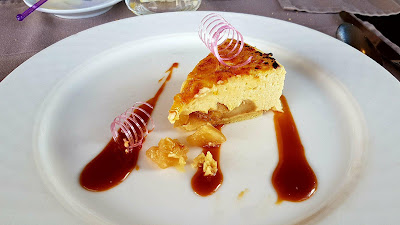