Here’s a treat. I am a great fan of Val Poore’s writing and have just finished her book: How to Breed Sheep, Geese and English Eccentrics. It’s absolutely wonderful, so you might imagine how pleased I was when she kindly agreed to share one of her stories here on my blog.
I’ll be back next month with another installment from France. In the meantime, grab a cuppa and settle down with Val, you’re going to love this one. 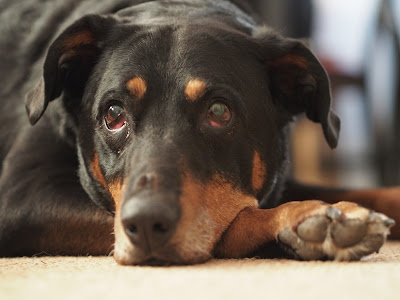 Now this is luxury! I’ve been let loose on Beth’s lovely blog here and she says I can write whatever I like! Isn’t she kind? Seriously though, I had no clue what to write at first. I didn’t want to do the usual ‘I’ve been writing since childhood’ post (you’d all have been yawning at the first paragraph). So, as I’ve been reading Beth’s posts for quite a time now and I absolutely LOVE her stories of French life, I thought I should maybe follow her lead and tell you all a story about my life in the Netherlands. That sounds like a good idea, doesn’t it?
Before I start, though, I have to say that living here isn’t anything like as exotic as the beautiful south west of France. But Holland is an interesting country, and as I’ve spent the last seventeen years living on a barge in the centre of Rotterdam, it has its own excitement. I should say, though, that given the vagaries of the Dutch climate, these are often provided by the weather.
The story I want to tell you is about the time a tree fell on my barge in a rather dramatic storm. I’ve mentioned it briefly once in one of my books, but I don’t think I ever went into detail about just how much of an impact it made on me – well, the impact was on the boat, actually, but it made a pretty deep impression on me too.
It all happened several years ago when I still had my lovely Sindy dog, a Labrador/Dobermann cross who was very nervous at the best of times, but even more during storms. Sindy had been abused as a puppy and it took me years to build up her trust. On this occasion, it was shattered again with one whopping bang. 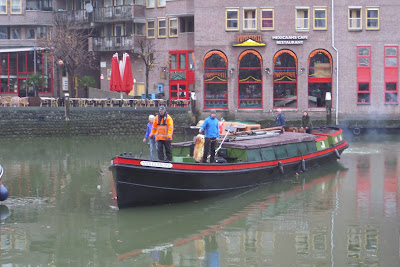 But let me set the scene for you. My barge, Vereeniging (Dutch for Society), is a very cosy and homely place. It doesn’t have many windows, however, because I have to keep its exterior as close to its original conformation as possible. The harbour where I’m moored is designated to historic and traditional Dutch barges. We are actually museum exhibits – yes, we are! As a matter of fact, the stories I could tell you about how that feels would keep me here for hours, but for now, suffice to say we are quite strictly regulated on what we’re allowed to do with our barges. So, going back to the windows, I only have one in the roof and one long narrow one at the back, the point being that no one can see them from more than a few metres away. It also means I can’t see what’s going on outside unless I open up the hatch and peer out – a bit like a mole coming up for air.
On the day in question, I was staying well inside. It was a Sunday and there was a tremendous gale blowing. Rotterdam is a windy place at the best of times, but this was something else. The tempests were in more than a fury, you might say. The Vereeniging was rocking to and fro, bashing against the neighbouring barges, and things were pretty uncomfortable. Even I was nervous. I couldn’t see much, but I could hear and feel every ghastly gust. We hadn’t had a storm this bad since I moved on board. To make matters worse, Sindy was absolutely terrified.
I was trying to keep her calm on the sofa, but she was shaking so much her teeth were rattling, poor baby. I couldn’t even read my book because for one thing, she kept climbing into my lap so I couldn’t see over the top of her head, and for another her trembling made me wobble too so all the words on the page were just a blur. It was a bit like being sat on by a running engine. There we were, then, a shivering, shuddering pair and all I could do was pray the storm would blow over.
I should also mention that there were large plane trees all along the quay at the time and every now and then I’d hear a crack as branches broke off. With every huge blast of wind, both Sindy and I looked anxiously at the hatch. Drrrrrrrrrrrr went my pooch’s teeth as her whole body shook. Then I heard another loud crack. And then another. I was becoming very uneasy about this.
‘Sindy,’ I said. ‘I think it’s time we abandoned ship. I don’t like this at all.’ 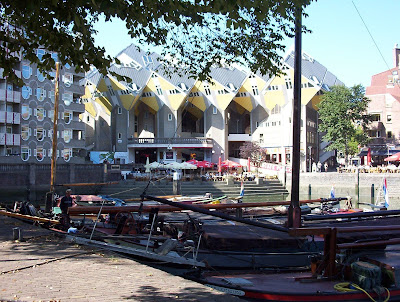 Now in those days, my partner, Koos, was living on his own boat, which was further along the row of moored barges. I decided we should go and take refuge with him; at least we wouldn’t be alone and I could rely on Koos to be a soothing influence on Sindy (and me too, if I’m honest).
Hastily pulling on my raincoat and Wellies, I snapped Sindy’s lead onto her collar and started up the stairs. As I pushed open the hatch, the wind ripped it out of my hand and it crashed onto the roof. Then I looked up at the trees on the quayside. Branches on the one in front of the Vereeniging were breaking off and swinging wildly. It was becoming distinctly apocalyptic; in other words, very scary.
‘Yikes,’ I thought. ‘Let’s get out of here!’
Heaving Sindy out was another story, though. She might have been terrified inside, but she was none too keen to go out either. Her body went slack like a sack of flour and her paws grew roots into the treads of the stairs. I had wrestle her up her step by step until we got to the top when I unceremoniously shoved her over the front bulkhead of the boat where she stood shivering, her tail between her legs.
Her eyes reproached me.
‘I’ll report you for doggy abuse,’ they said.
Meanwhile the rain was lashing down in stair rods and the wind was howling through the gaps in the buildings behind us. Did I say it was apocalyptic?
‘Sindy,’ I yelled, after closing the hatch. ‘Let’s go!’ And I made a dash towards the bows of the barge. I led the way; Sindy followed – or rather, I dragged her, sliding her resisting legs across the deck. She either wasn’t proving very cooperative or she’d forgotten how to walk. Luckily, the tide was in and the water level was high, which made it easier to get her quickly down to the quay.
I manhandled Sindy onto the plank, shunted her down the slope with indecent haste and hurried along the quayside. Then just as we reached Koos’ barge, there was an almighty crunch. I looked back and watched in horror as the tree keeled over. It crashed down, totally buckling my gangplank before it thudded onto the Vereeniging’s foredeck. Thank goodness for water displacement; my poor barge would have been flattened otherwise. Thank goodness we weren’t in there too; it would have taken quite a rescue operation to get us out. 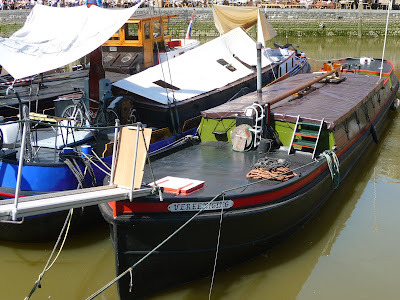 As it was, it was a miracle there was virtually no structural damage to the Vereeniging. That said, the tangled mess of branches and debris meant we couldn’t go home straight away. The council came along the next day to clear it but it was two days before I could get back on board again.
‘I thought you said you didn’t have premonitions,’ Koos commented when he saw what had happened.
‘I don’t,’ I grimaced, ‘but I do have a very good sense of self-preservation, so maybe in this case it’s the same thing!’
A couple of years later, we had another violent storm and yet another tree landed on my barge. I couldn’t believe it could happen to me twice. Talk about Murphy’s law! Fortunately, no one was on board then, either, but it caused a lot more damage and I had to have the girders that held the roof hatches in place repaired. Since then, all the trees have been cut down and replaced by saplings, so thankfully we are safe again.
The only risk we have now is from the swarms of foreign tourists who think our boats really are museum exhibits and believe they’re entitled to come on board and poke around. Only last week I looked out one morning to find a group of Japanese men and women posing for a photo opportunity on my foredeck. Such is the flavour of life in a historic harbour in the Netherlands! As I said, it isn’t as exotic or as beautiful as France, but it’s never boring.
Lastly, thank you so very much to Beth for having me here! I’ll go back to my own blog now and leave you all in peace!
LINKS TO VAL’S BLOG, AUTHOR PAGE AND TWITTER PROFILE:
Blog link: http://vallypee.blogspot.fr/
Amazon author page link: https://www.amazon.com/Valerie-Poore/e/B008LSV6CE/
Twitter: https://twitter.com/vallypee
Share or Like