I’m delighted and honoured Beth Haslam has asked me to be her guest blogger this month. Although we’ve yet to meet in person, Beth and I have been virtual friends and professional colleagues for several years and I have long been a fan of her excellent Fat Dogs and French Estates books. On the day I signed the contract to write my Fresh Eggs and Dog Beds series, my publisher advised me to contact Beth for advice and support.

“She’s great,” they said, “and she’ll be happy to help. Her story is just like yours.”
Of course they were right. Beth is a lovely lady, always willing to offer advice and encouragement – even when it’s only to help me identify some particularly stinky French cheese. And our stories are certainly similar. At the time Beth and Jack were gazing listlessly through a rain speckled window in England and dreaming of a better life elsewhere, my wife and I were just 50 miles away having the same thoughts, but where the Haslam’s moved to France, Lesley and I headed west to a country we had never visited.
Why did we pass up the promise of seemingly endless sunshine in southern Europe, in favour of buying a derelict farmhouse with a few soggy acres in the rural west of Ireland? It’s still somewhat of a mystery. My humorous riposte to that frequently asked question is, “It was an idea conceived in drink,” but that isn’t strictly true. On our first visit to the emerald isle, we were magnetically drawn to the beautiful unspoiled countryside, the lovely people and the feeling we had been transported back to a time when life was less complicated.

By the middle of the first week, we were hooked and quickly began hunting for our new home. Much like Beth, our carefully choreographed search soon degenerated into a comedy of errors. Whereas finding our dream property proved difficult, buying it seemed almost impossible – and that wasn’t all. Soon we were being stymied by indifferent lawyers, unenthusiastic banks, unsalable properties and a complete absence of available builders. Undeterred, Lesley and I pressed on and eventually became the proud owners of Glenmadrie, a former goat farm high in the hills of beautiful County Clare. With little money and even less experience behind us, we bought a secondhand DIY manual and began the long process of renovating our home by ourselves. Although there were some close calls and hilarious adventures along the way, somehow we survived and those experiences brought us closer together.

When the renovations were completed, we had a delightful family home and a productive vegetable garden. At last I had the time to tackle another challenge – writing a series of humorous memoirs. As well as telling the story of our move to Ireland, I had plenty of interesting friends to introduce to my readers and dozens of amusing tales to tell about our dogs, cats, chickens, ducks and the local wildlife.

These days, modern technology has a lot to answer for, some good and some bad. In our case, it resulted in the arrival of a new dog to our happy home. It all started after I changed mobile phone providers…

“My goodness!” I showed Lesley the advert. “Look, I’ve found the answer to all of our problems!”

We had a long drive ahead and it was already late as we finally set off for home. The journey along unfamiliar roads was not made any easier by the steady drizzle which turned the oncoming headlights into a succession of greasy flares on the windscreen. During a break in the traffic, I glanced at Lesley who was sitting in the front seat and cuddling the puppy. In our excitement, we had not thought to bring a blanket, so our new friend was safely wrapped in Lesley’s best coat. By the faint light of the dashboard clock, I was able to see my wife was gently stroking the little dog and smiling like a new parent.

“So, what shall we call her?” I asked, hoping the conversation would help to keep me awake until we got home. Lesley looked down at the puppy. She gently stroked its soft white fur and the honey coloured tips of its ears.
“How about Goldie?” she asked.
“I think that’s what every other golden retriever on the planet is called.”
“Blondie?” Lesley suggested.
I pulled a face and sucked my teeth. “A bit obvious don’t you think? Anyway, I was never much of a fan of her music.”
Lesley gave my arm a warning thump. “You suggest something.”
“What about Kim?”
“Kim’s a boy’s name.”
“Sally?”
“Won’t work.” Lesley shook her head. “We had a next door neighbour in England called Sally. She had jet black hair.”
“Let’s call her Joanne,” I quipped.
“I don’t think our daughter would approve of us calling our dog by her name.”
“At least she’ll come when we call her.”
“I wouldn’t bet on it,” she said, with heavy irony.
There was a natural pause in the conversation while we got on with the quiet business of driving and dog petting. I thought about our daughter, her husband and our grandson, Austin. They were happily preparing for Christmas at their new home in England. Austin was two years old and excited at the prospect of his first proper Christmas. They were due to visit us in January. I reached over and gave the little head a stroke with my fingertips.
“I hope she stays this soft,” I said. “Austin’s going to have a fit.”
“I can’t wait to see his face. He’s never been in a house full of dogs, it should be fun.”
“Should we call it Honey?” I suggested.
“Honey…” Lesley said, in a gentle whisper. “Honey… Yes, that could work.”
“Do you think so?”
“What about it little one?” My wife gave the tiny pup a stroke between the ears. “Shall we call you Honey?”
Honey lifted her sleepy head and, after a moment’s careful consideration, promptly regurgitated her supper over Lesley’s best coat.
“Well, that’s settled then,” I said, as I pulled off the road and handed Lesley the roll of kitchen towels all experienced dog owners carry in their cars. “We shall call you Honey.”
And so Honey was christened in a Volvo on a rainy night in December whilst Lesley was liberally splattered with milk. A fair exchange in anyone’s book. 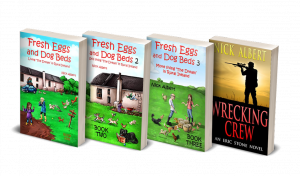