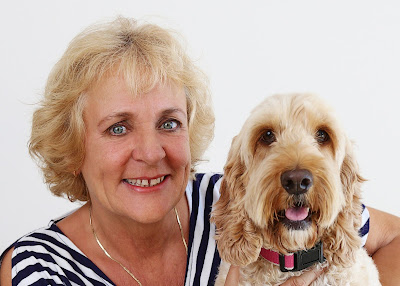 I am honoured to be asked by Beth to write a guest blog. Why? Because I am Beth’s biggest fan. In fact, since we met online, I often wonder if we are related because we have so much in common. Perhaps we were stolen by gypsies and separated at birth, destined to live parallel lives.
Years ago, both Beth and I left England’s grey shores in search of a peaceful retirement in another part of Europe. While Beth and her husband, Jack, dreamed of a property in France, Joe and I hoped to find somewhere to live in southern Spain.
After a hilarious house-hunting expedition, Beth and Jack ended up buying a gorgeous but dilapidated estate in France, surrounded by forests teeming with wild boar and deer. Meanwhile, Joe and I moved into a crumbling cottage in a tiny, remote Spanish mountain village. Crumbling is the correct term because we discovered our ancient house was constructed from mud and rocks, held together with a lick of lime whitewash. We knew the house needed work, but we didn’t realize that it was in danger of falling to pieces. So, while Beth and Jack set to work fixing their estate and grappled with communication in French, we attempted to stop our cottage collapsing while murdering the Spanish language.
A word about our husbands, and I’ll whisper this. They are both unbelievably grumpy. Yes, they are so irritable, short-fused and impatient that, privately, we call them our bears. Happily, their exteriors hide soft, kind and generous natures allowing us to overlook their grouchiness.
We also ignore their strict orders not to fill our lives with animals. Beth soon began raising pheasants, partridges and chickens. Meanwhile, Joe and I somehow became chicken farmers and owned probably the most dangerous cockerel in Spain.
Wildlife and feathered creatures, as charming as they are, weren’t enough. Another similarity. Beth and I rescued orphaned kittens. Both bears were sucked into kitten-parenting duties and livestock care and despite initial loud protests, almost confessed to enjoying it.
Beth and I both maintain that much of the joy of moving abroad is living amongst the locals. Beth paints wonderful word pictures of their new French friends. Likewise, our village, though small, was bursting at the seams with colourful characters. Take Paco, next door, for instance, who kept us supplied with homemade wine and advice.
“Pah! My wine is the best in Andalucia,” he always shouted, slamming his fist on the table and splashing more wine into our glasses.
It probably was, but we lost the ability to think after a few refills. Meanwhile, his wife, Carmen, ensured our waistlines expanded with cakes and other Spanish deliciousness.
When the Ufarte family moved into the cottage next door, we were treated to nightly flamenco in the street, and Lola Ufarte’s antics provided the village with more conversation starters than a soap opera.
“You’re such a gossip!” Joe accused me when he caught me deep in conversation with old Marcia at the village shop when I was supposed to be collecting our mail.
But I noticed he was just as fascinated as I was by whose husband or boyfriend Lola would lure away next. And he asked Marcia if the rumour was true about a millionaire moving into the village.
I could easily continue rambling on about our crazy life in Spain, but I don’t want to outstay my welcome. However,  I can’t leave before mentioning the two most obvious traits Beth and I share.
Dogs and writing.
I don’t think I’d be happy without either, and neither would Beth. They are addictions we have no wish to cure.
When my beautiful dog, Lola, (named after Lola Ufarte, of course) came into my life at a difficult time, she lifted my spirits and helped me cope. And the writing? Joe threatens to tie my hands behind my back to make me stop, but I’d just type with my nose.
I can’t believe I’ve just published the sixth book in the Old Fools series, and I know Beth isn’t far behind. She’s too modest to tell you herself, but Fat Dogs and French Estates, Part 5, is definitely on the way!
Thanks, Beth, and thank you, readers!
Victoria Twead
New York Times bestselling author 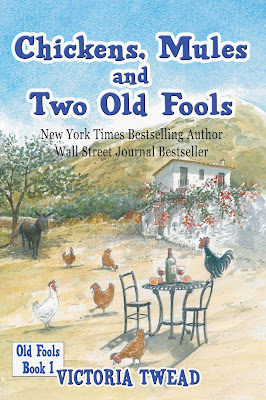