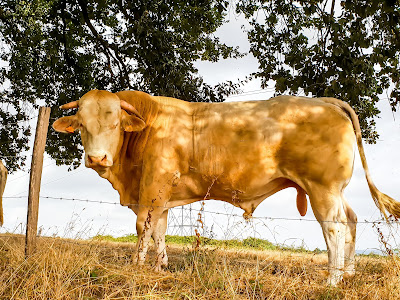 “Would you like to see my bull?” said the man, drawing up alongside me in his truck. I was dog walking on a deserted country lane. Under normal circumstances, I might have felt distinctly uncomfortable about such an offer, but this was different. This was Patrick Sazy, a breeder of prize-winning Blonde d’Aquitaine cattle and all-round lovely chap.
The whole family specialise in the beef business, and have the entire process covered, although Patrick doesn’t like to speak much about the end result. With animal welfare at the forefront of his mind, his passion is for rearing and nurturing spectacular live animals.
“Ooh yes please, Patrick,” I enthused. 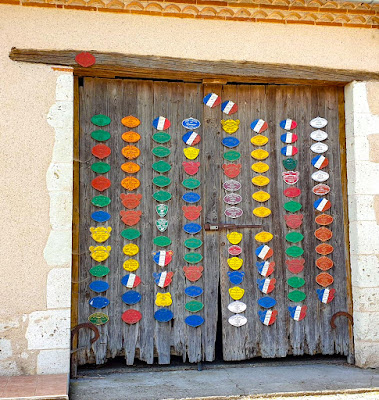 “You’re welcome. Follow me. I have a bovine specialist coming later. He is pre-selecting for the national livestock show in Paris. I have my best bull and cow to be judged.” 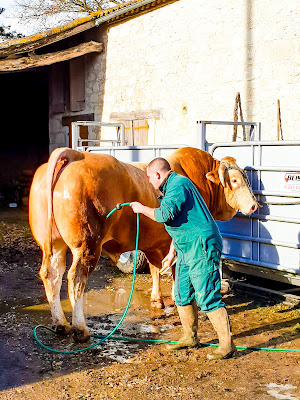 I had wanted to visit his stud farm for ages. This was an opportunity too good to miss. The dogs and I ambled into his yard just as a large trailer pulled in. With fur oozing out of the vents on both sides, and tyres depressed by the strain of their cargo, I guessed what might be inside. The whole vehicle was swaying gently.
Out of the cab sprang a very pretty girl followed by two men. They pulled down the trailer ramp which revealed the most prominent backside I had ever seen.
“This is my colleague’s bull from Gers,” said Patrick, “it will be judged too.”
This was exciting. I couldn’t wait to see the other end of it. A couple of eager whines suggested that Aby and Max, our Australian Shepherd dogs, were thinking the same thing. Concerned they might start developing latent herding skills, I decided to tie them up before they made a nuisance of themselves. Patrick found me two lengths of bind-a-twine. I tethered them to a tractor in a grandstand position and watched while the newcomer was unloaded.
The monster, still inside, started quivering and pounding the trailer floor. Aby and Max stared, looking absolutely horrified. Checking them, so they didn’t break into a hysterical chorus of barks, I enthusiastically snapped away with my camera.
“Madame, this is not his best feature,” said a grinning stockman, “you might be better to wait until he comes out.”
“Ahem, yes. Yes, of course,” I peeped, embarrassed at being caught taking photos of such an immense derrière.
Chains rattled inside the trailer as tackle was released. The vehicle’s sides rocked as Monsieurle bull decided it was time to go. Gates either side of the steep ramp were put in place and out he came, one bellowing pace at a time.
I stared goggle-eyed at the emerging mountain of flesh, wondering whether the little man hanging onto the halter rope was in fact as small as he looked. But no, as I quickly realised, he was above average height. It was his animal which was vast. 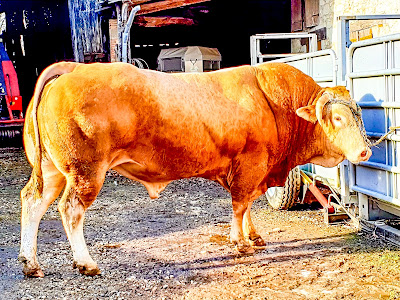 Once out, the bull, who actually seemed a placid enough chap, was tied up as his handler prepared him for the judging. This wasn’t quite as technical as one might think since it involved a scrubbing brush, and a hose, and a buffer-upper for finishing touches.
As the gent got stuck in, the lady, who turned out to be his wife, joined me. Admiring her pride and joy, she told me about their five-year-old home-grown boy and the breed standard. It was fascinating.
The ideal conformation for the Blonde d’Aquitaine breed is complicated, she said. Features such as dappling on the back forming rosette shapes, the curvature of horns, the rump and musculature were all significant, as were the chest depth and set of the eyes. It seemed that they had bred a fine specimen, one they had high hopes for in the show ring. There was one key issue, though. And I’m afraid it’s difficult to express it any other way.
This was a very mucky bull. 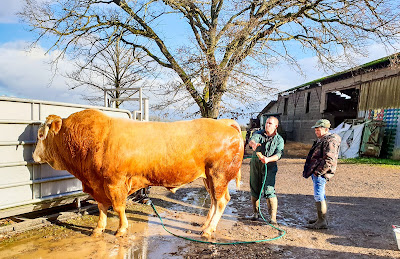 Every time poor monsieurcleaned up the rear end, there would be a swish of the tail and another outpouring. But this wasn’t an innocent dribble. Oh no, it came out like a power washer. On jet setting. One lot was deftly splattered all over Patrick’s car windscreen, which caused a good old belly laugh about the future need for industrial strength windscreen washers. Then the bull altered his ejections to squirt mode and caught the roving stockman square on the side of his face as he walked past. Nobody seemed to mind, though, this seemed to be normal.
Happily, monsieur taureau eventually ran out of fuel, which enabled the final bidet session to be completed and buffing-up to commence. He was gleaming by the time they’d finished. Meanwhile, Patrick had been preparing his own beasts in the shed. This building was one of several, all of which contained fabulous looking cattle. And they were as interested as we were in what was going on. 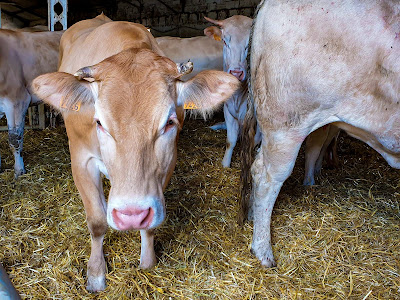 The Gers bull was untied and led to his place in the stable. More people arrived for the judging. As each car drew up, out came crates of beer, Pernod and breadsticks. Judging bulls must require a great deal of sustenance, I decided. I followed them in, agog at seeing Patrick’s beast for the first time.
And there he was. 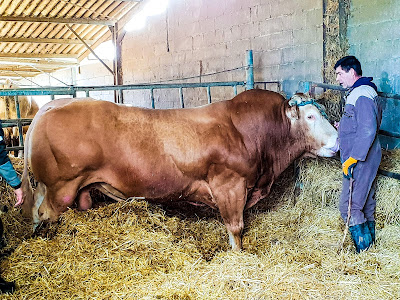 A moment of maths, here. Patrick was standing on top of a sweet-smelling deep bed of fresh straw. His taureauwas knee deep in it. Patrick is well over six feet tall. On the same level, I calculated that this animal must surely tower over him. More substantial than the interloper from Gers, this animal was beyond magnificent. Beside him stood the beautiful, creamy-coloured cow. Calm, and entirely unperturbed by the appearance of the new bull, she watched as he was gently slotted alongside. I swear that girl looked smug.
The air was thick with testosterone as we began the long wait for the judge to arrive. I took a short video during this period which I have posted on my Facebook profile. It quickly became clear was that Patrick’s bull evidently didn’t like the idea of this pretender, who might threaten his position as head of the heard. He got a bit grumpy and started a slow-motion thrashing, transforming the straw into confetti with each stamp. Patrick, sensibly hanging onto its nose ring, lovingly chided his charge. 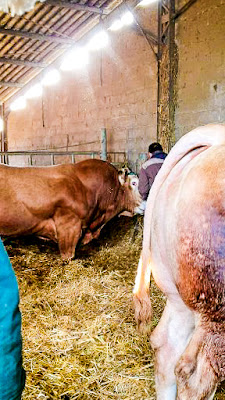 The cow, sandwiched between the mounts of masculinity, still wasn’t taking a bit of notice of either beau. She calmly chewed her cud, while the newcomer took an unhealthy interest in her backside. Actually, it wasn’t hers I was worried about. If he’d let rip again, we’d all have been covered.
Then something new happened.
Patrick’s bull, now thoroughly fed up, started making strange noises. Have you ever heard a bull roar? In a stable? If not, I can tell you it’s a remarkable, bone-rattlingly booming kind of a sound. As this animal began to vocalise, its enormous, muscular body contorted with the effort. Out came this extraordinarily powerful sound. This was truly a fabulous animal, ferocious, yet utterly majestic. 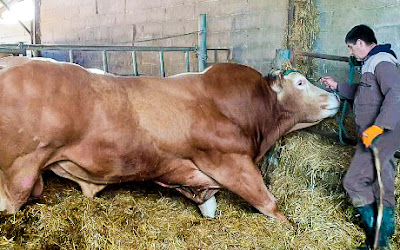 Fortunately, Patrick was used to the protective antics of his boy and kept him under close control with the aid of stern words and the occasional slap with a stick on his shines. It must have felt like a feather tickle. Meanwhile, the beautiful cow continued to look on benignly, batted her extra-long lashes as she munched.
Disappointingly, the judge was delayed, and I reluctantly had to go before the pre-selection took place. I unhitched the dogs, who had been quiet as lambs throughout the whole process, wished everyone bon chance, and we returned home. It wasn’t until some weeks later that I learned the result. I bumped into Patrick’s sister-in-law and asked her what had happened.
“Come with me,” she smiled, ushering me into her office, the beating heart of their cattle business. Walls were lined with rosettes, photographs of winning beasts with family members beaming alongside. Trophies were on filing cabinets, shelves, anywhere. Everywhere. 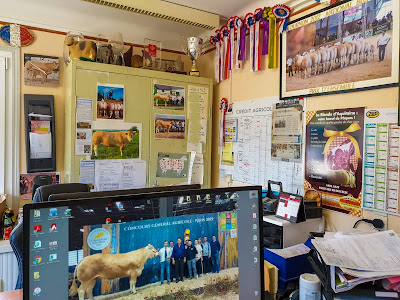 The upshot was that both Patrick’s animals had been passed for the national show in Paris, and there was more. His fine bull had been placed overall third in show, but his gorgeous cow had been crowned bovine female show champion. They were both Champions of France. This wonderful family had done it again. Thrilled for them, I complimented her on their success. 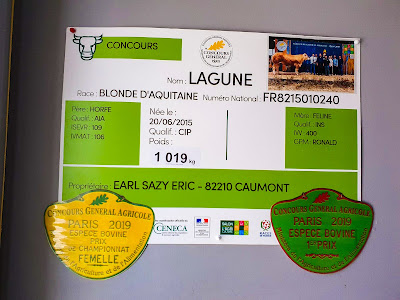 “It is our passion,” she said bashfully. “We are nutritionists. We work with vets to breed our animals correctly and give them different special foods for their four growth phases. All completely natural. Only the best. We love our animals and want only to produce the best standard beasts with good character.”
I don’t know what happened to the bull from the Gers, but so long as he had been able to keep a lid on things I felt sure he would have been in with a great chance too.
My dog walk that day may have started out with a quaint offer, but it developed into an experience I shall never forget. I suspect the dogs won’t either. It had been a perfect treat and another unexpected adventure to mark our lives here in France among these kindest people. Life doesn’t get much better than this! 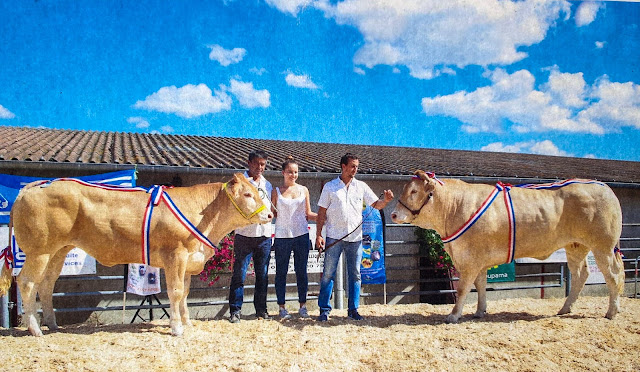