My husband, Jack, is an engineer. Mending vehicles, forest equipment, household machines, it’s all easy-peasy for him. On the other hand, unlike me, he isn’t a trekker or a dog walker. Not Jack. I’d go so far as to say he considers them a complete waste of time. Bear that in mind when you read on. 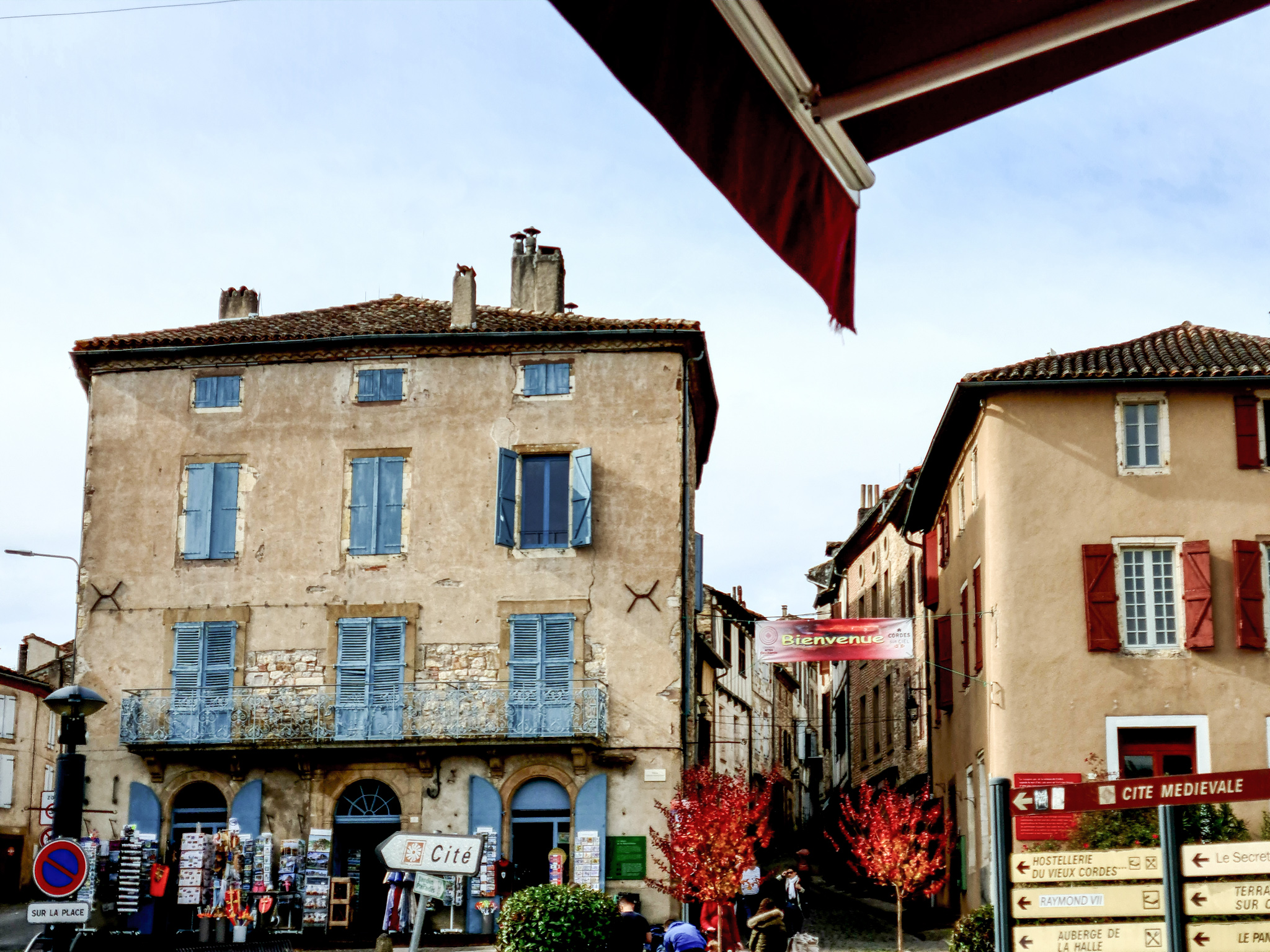 It was my birthday, and Jack had agreed to visit Cordes-Sur-Ciel, somewhere I had wanted to see for ages.

Anything to do with history, and I’m hooked. Unsurprisingly, this famous medieval town in the Tarn dating back 800 years had long been on my bucket list. But there was another feature about this place that piqued my interest, the clue being in its name. (I’ll explain shortly.)

We set off, driving past the majestic gorges d’Aveyron and arrived in Cordes at lunchtime. Which was handy. Relaxed and naïvely misguided, Jack glanced around as he finished his slab of lasagne avec frites.

“Goodness, no, this is just the outskirts.”

“I thought there might be something more to your plan. So, where next?”

I pointed at a banner across the road emblazoned with ‘Bienvenue’, the start of our route to the old village. Our destination. Filled with a decent lunch plus a glass of wine, Jack contentedly sighed. 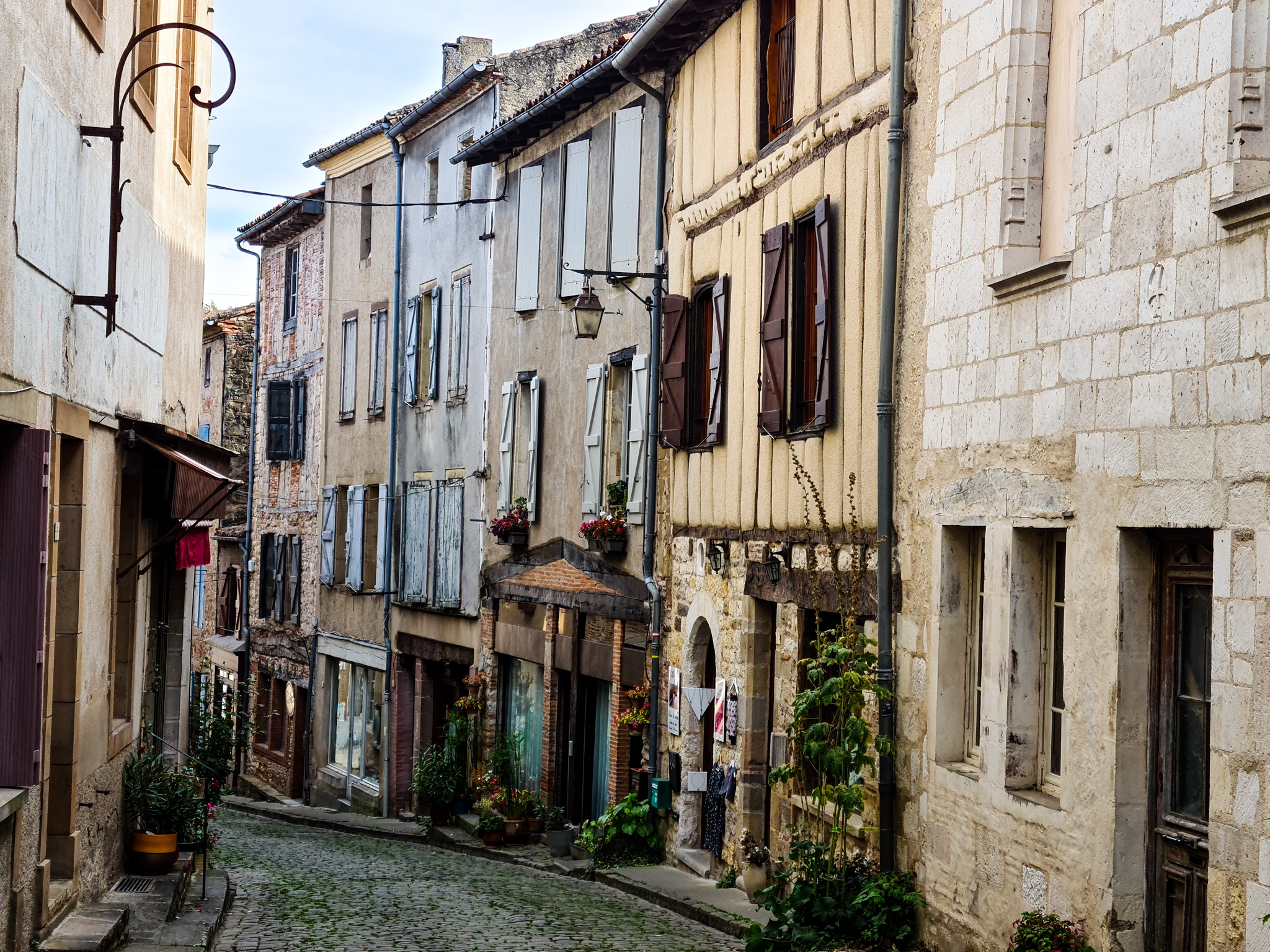 There was barely a soul about when we set off. Cobbled streets all the way, even Jack shared my admiration for the medieval architecture. The ironwork, beams and, of course, those heavenly shutters were all spectacular. On we continued until I spotted an open door. Irresistibly enticed, I popped in. It was a tiny chapel called the Capelette Saint-Jacques.

A plaque told us that the building was constructed in the 16th century for the Saint-Jacques hospital, which no longer exists. Its link with the pilgrimage to Compostela and the alleged burial site of Saint James was evident. Those frescoes on the walls and shells beneath the cross told a tale of their own. We paused for a moment, absorbing that warm quietude one often feels in buildings of this type.

We resumed our trudge up the gently inclined cobbled way, which was becoming less gentle with each stride. Ahead was a deep arch, which caught Jack’s eye.

“Excellent construction. Do you know the background?”

“I’m so glad you asked. There are three of these doors, one dates from the twelfth century. Imagine that!”

“Honestly, Jack, you’re hopeless! Well, this one is called the Porte de l’Horloge. Weirdly, the clock was added later.”

A little farther on, we came across another, even more magnificent archway. We stopped to examine its multilayers. Jack had a poke around, looking for evidence of interior fittings.

“It looks as though this was fortified in some way.”

“Ahah! Yes, it will have been. Cordes has connections with the Cathars.”

“Yep. Lots of battles occurred in Cordes, especially during the Cathar Crusades between1209-1229.”

“Good Lord, those soldiers must have had legs like mountain goats to manage this rock face. My quadriceps muscles are screaming.”

“Never mind, hurry up. If you came on dog walks, you’d be fitter.”

“I’d rather rebuild a tractor from scratch, thank you.”

Up and up we walked, between medieval houses squashed together with topsy-turvy roofs. Labyrinths of teeny weeny venous alleyways fed off our route, one of which was astounding. Walking through there would be a squeeze for me. Goodness knows how a fully armoured soldier would have managed. 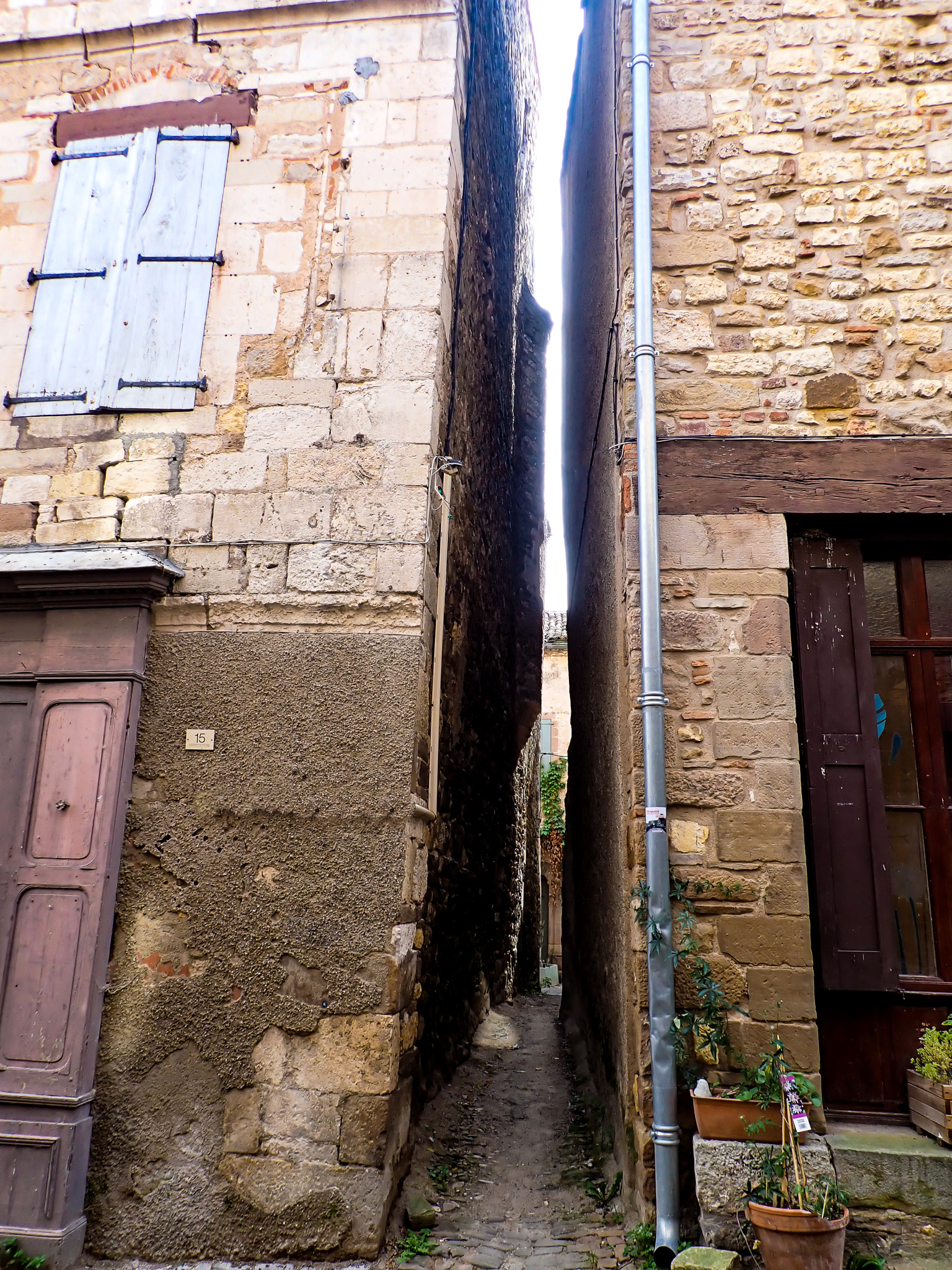 Glorious little artisan shops were interspersed between the half-timbered homes: Ateliers, crafts workshops, art galleries, jewellery shops and one I had to stop to admire. 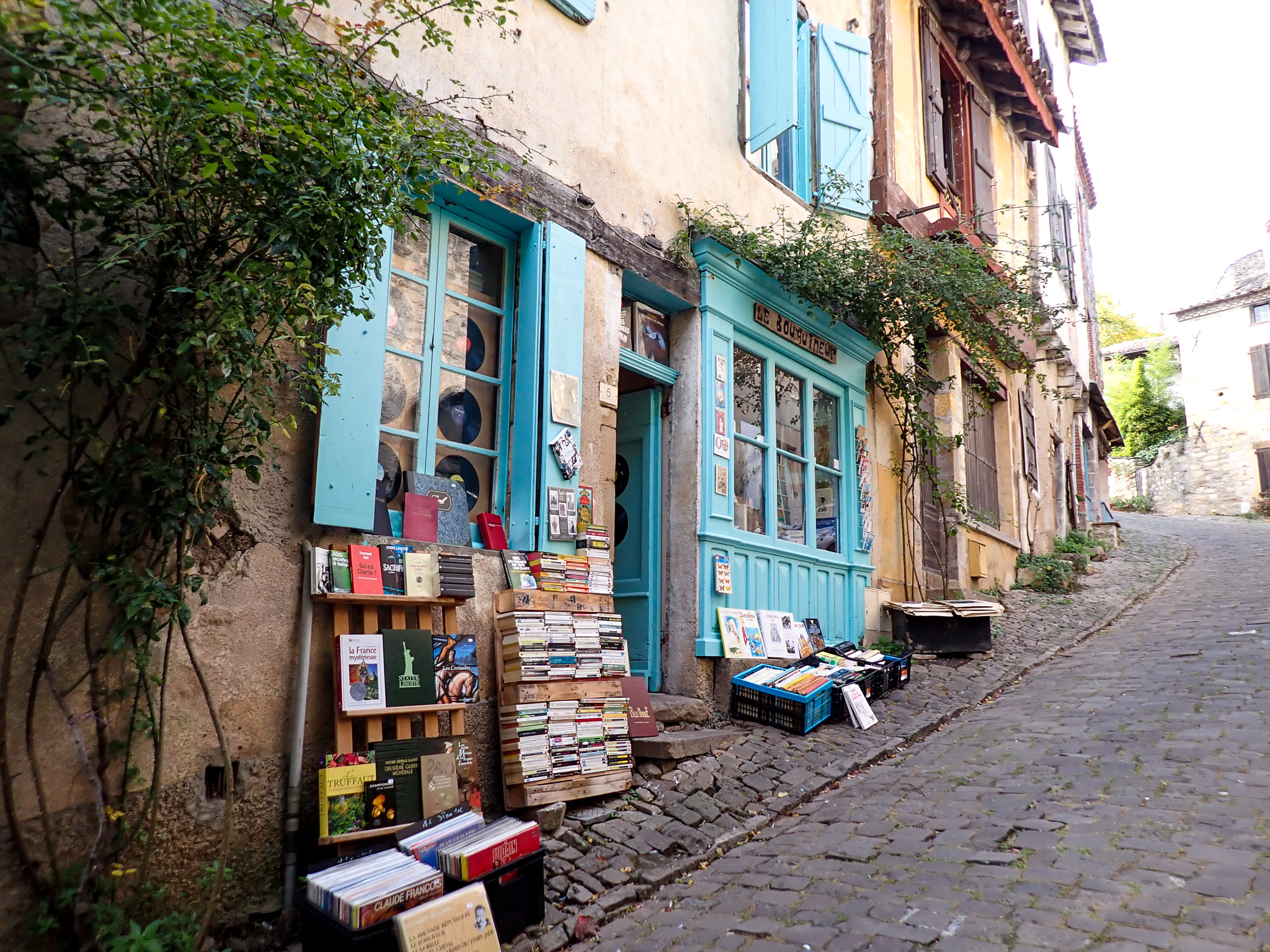 I examined the books while Jack, puffing, moaned in the background about the logic of building an entire village on a rock face.

“God knows how they keep those books from sliding down the slope. They must use a series of wedges for the display cases. Is this the only route up to the top? I’m sure we could have taken the car.”

“Oooh, not certain about that. Never mind, I’m sure it’s not far now.”

This wasn’t the time to tell Jack that I’d seen a road from the restaurant running parallel to our route. Taking the original cobbled way on foot was far more fun.

Now and again, we passed homeowners going about their business. Approximately 900 people live in the village. I couldn’t help thinking that it must feel a bit like living in a fishbowl during the high tourist season. There again, becoming part of its history must be a remarkable experience. 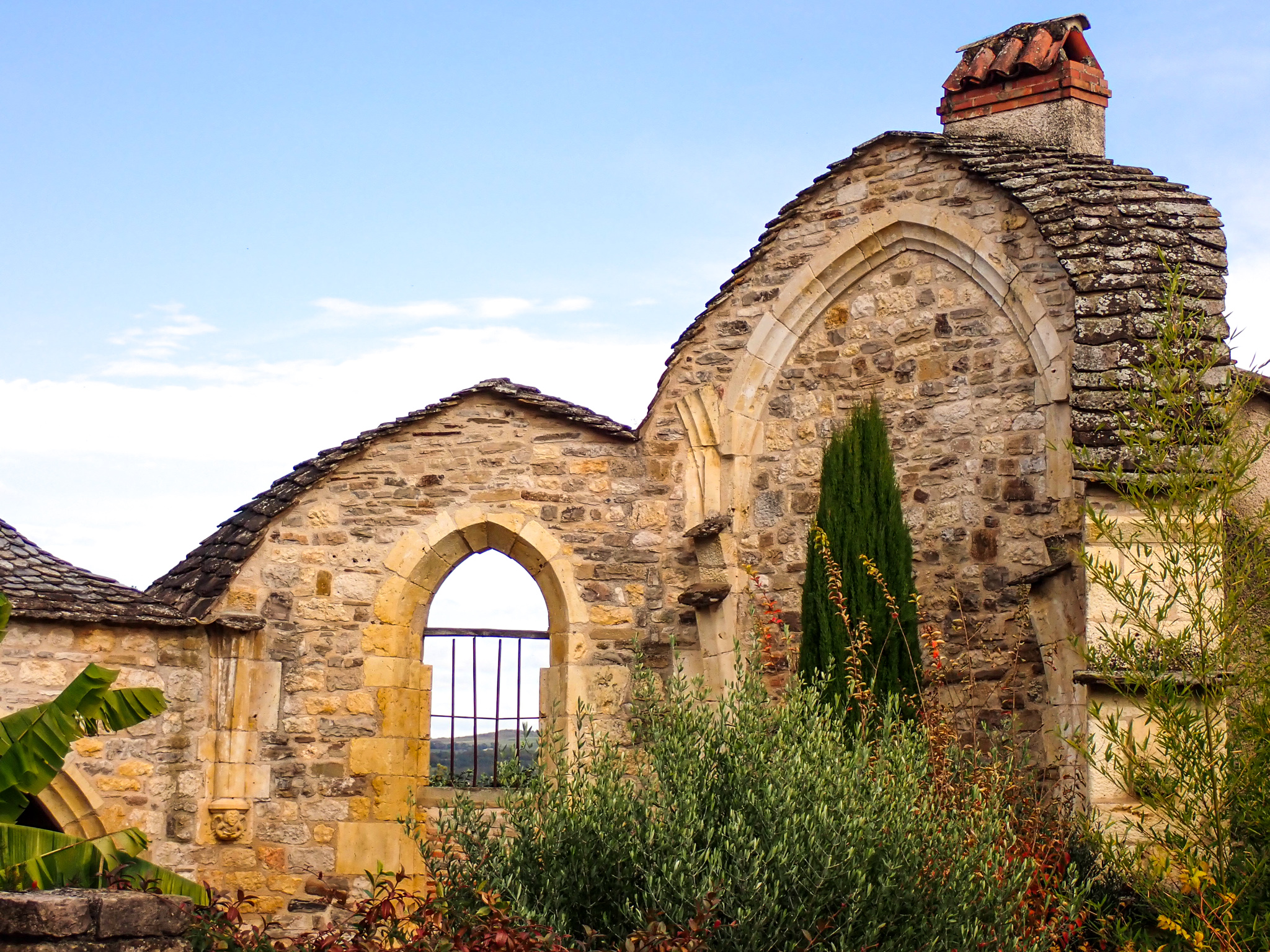 We stopped for another breather at one of the strategically positioned benches. There were lots of those, and I’m not surprised. It was hard going on those slippy cobbles. On we staggered, grateful for autumn sunshine rather than the baking summer heat. We passed a handful of tourists adopting the same approach; stop, start, breath, sit down. Jack shook his head in communal sympathy.

“That poor bloke looks as though he’s on his last legs. I’m not far off either.”

Ahead was another hairpin bend. A direct route up would, I guess, have been impossible. All those inclined bases of the buildings suggested as much. 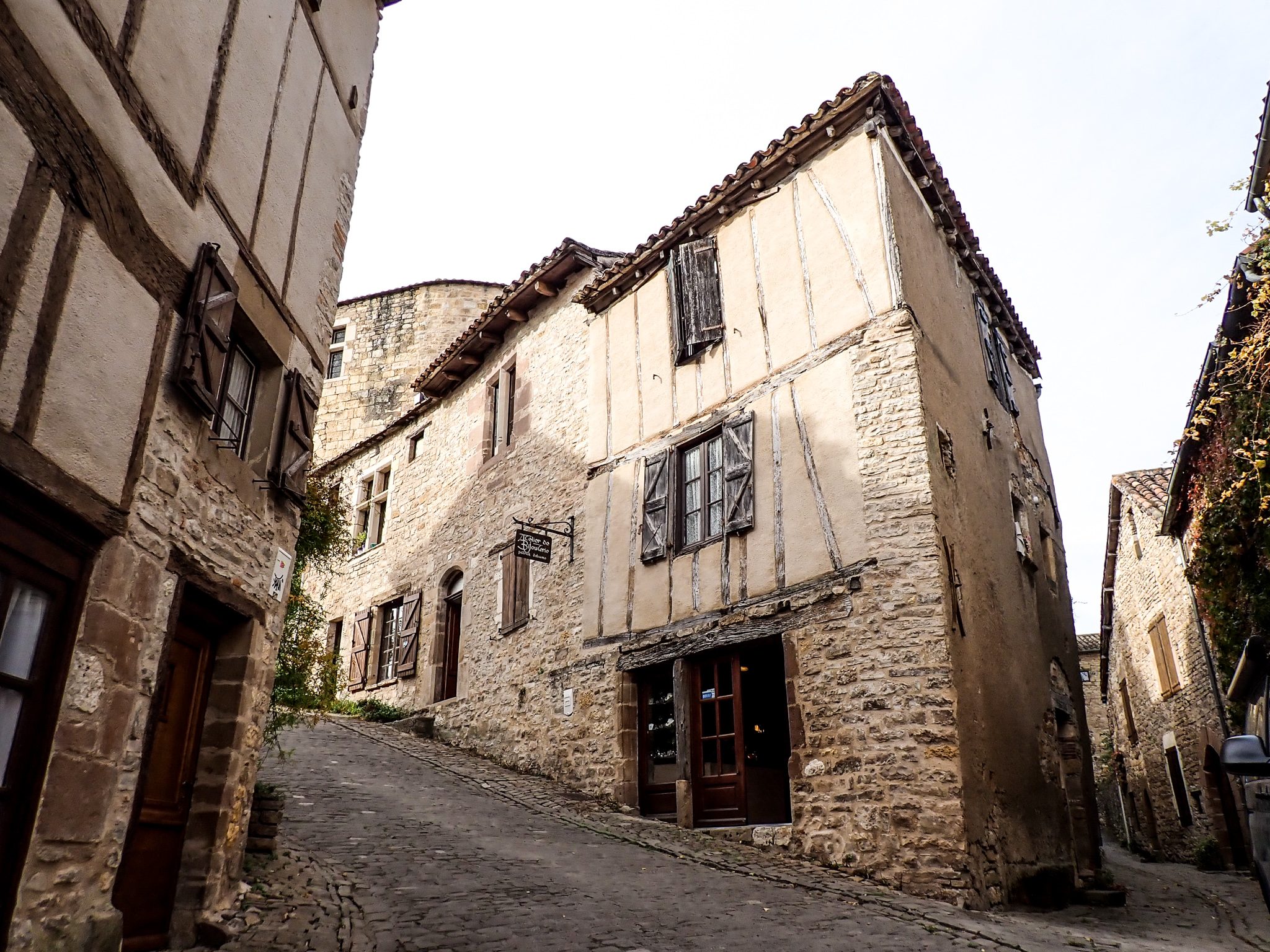 We came to what seemed to be an apron wrapped around the village’s outer section. The views were spectacular, as were the medieval homes with their braces, studs and ancient beams. 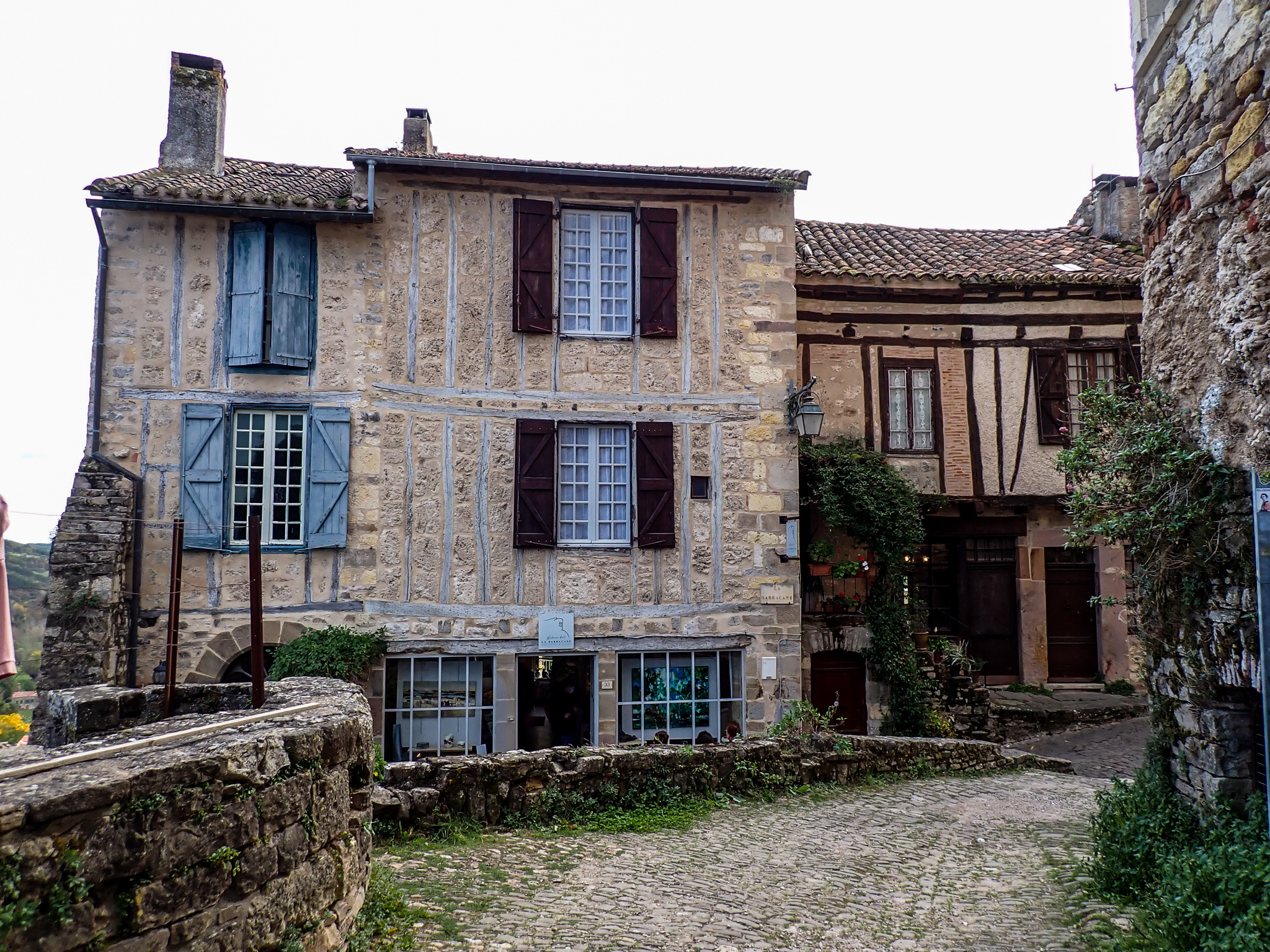 We peered over the edge. Houses tumbled down the hill in a jumble of different shaped roofs. Not for vertigo sufferers, outstanding for us.

Being one of those people annoyingly determined to reach ‘the top’ (wherever that may be), I forged ahead towards the next right-angle corner. Poor Jack isn’t afflicted with the same level of wanderlust.

“Are we nearly there yet?”

“Probably. Keep going. It’s such an interesting place, isn’t it?”

Cordes was as fascinating as it was deceptive. Ahead was yet another sharp corner. I was sure we must be close to the top by now. We weren’t, but it was an excellent excuse to catch my breath. 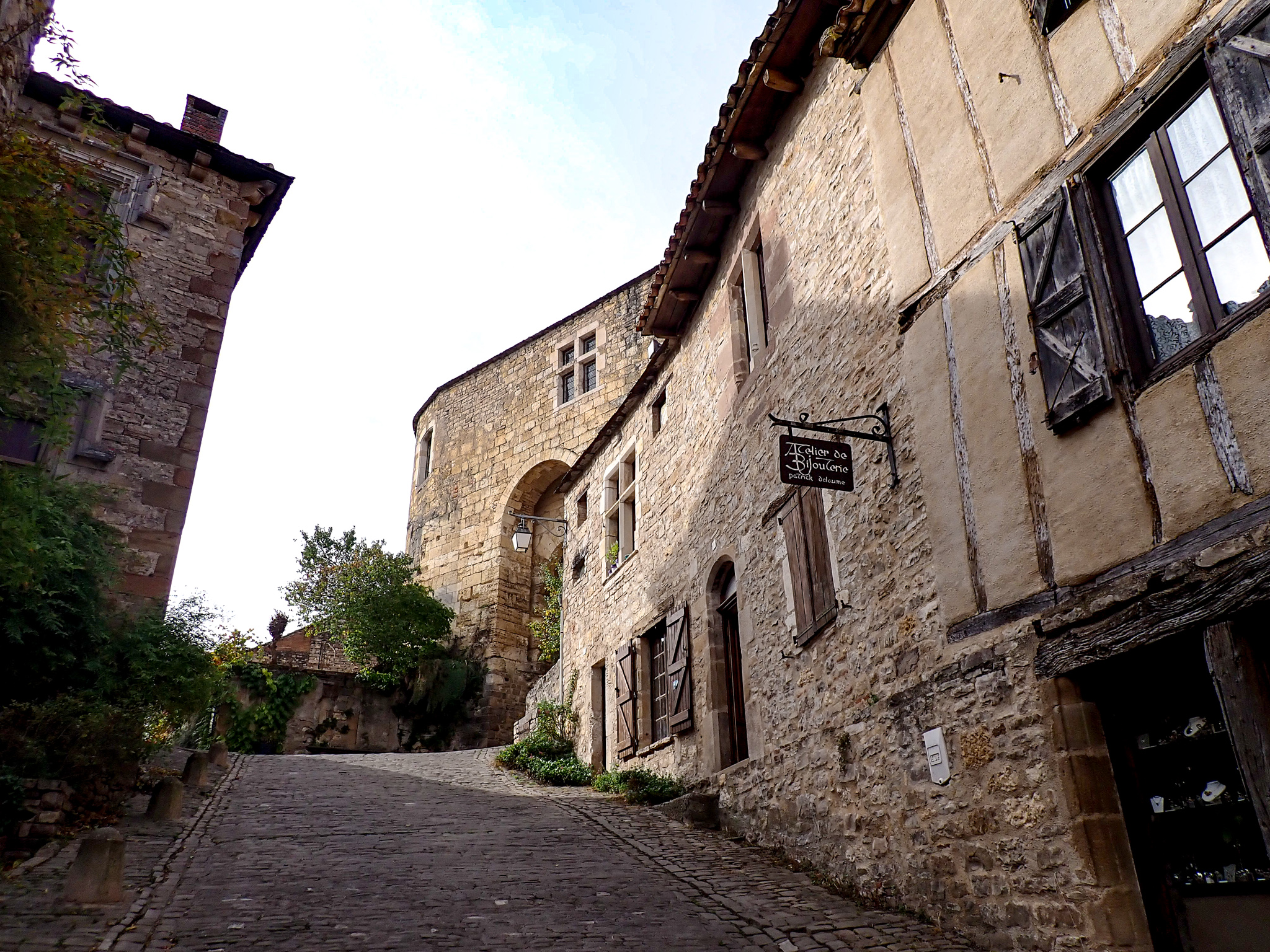 “Jack, quick, come and have a look at this. It’s another one of those multi-layered arches.”

“Quick? You must be mad. I’ve got cramp in my calf muscles now!” 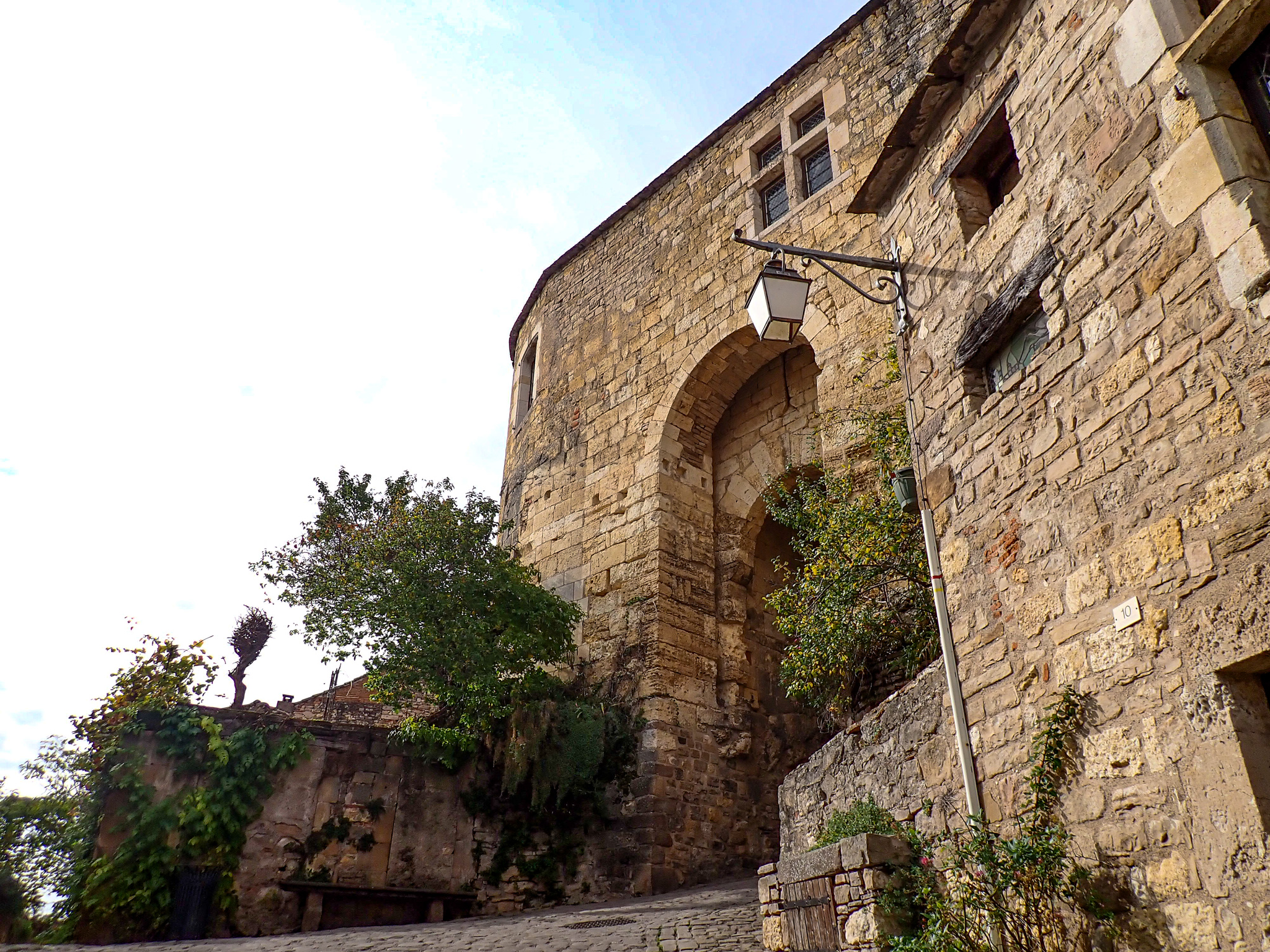 We knew that several changes had been made to the village over the centuries. What beat us was how they managed to haul such vast pieces of masonry up the hill. Working out the logistical possibilities distracted Jack from his latest ailment. 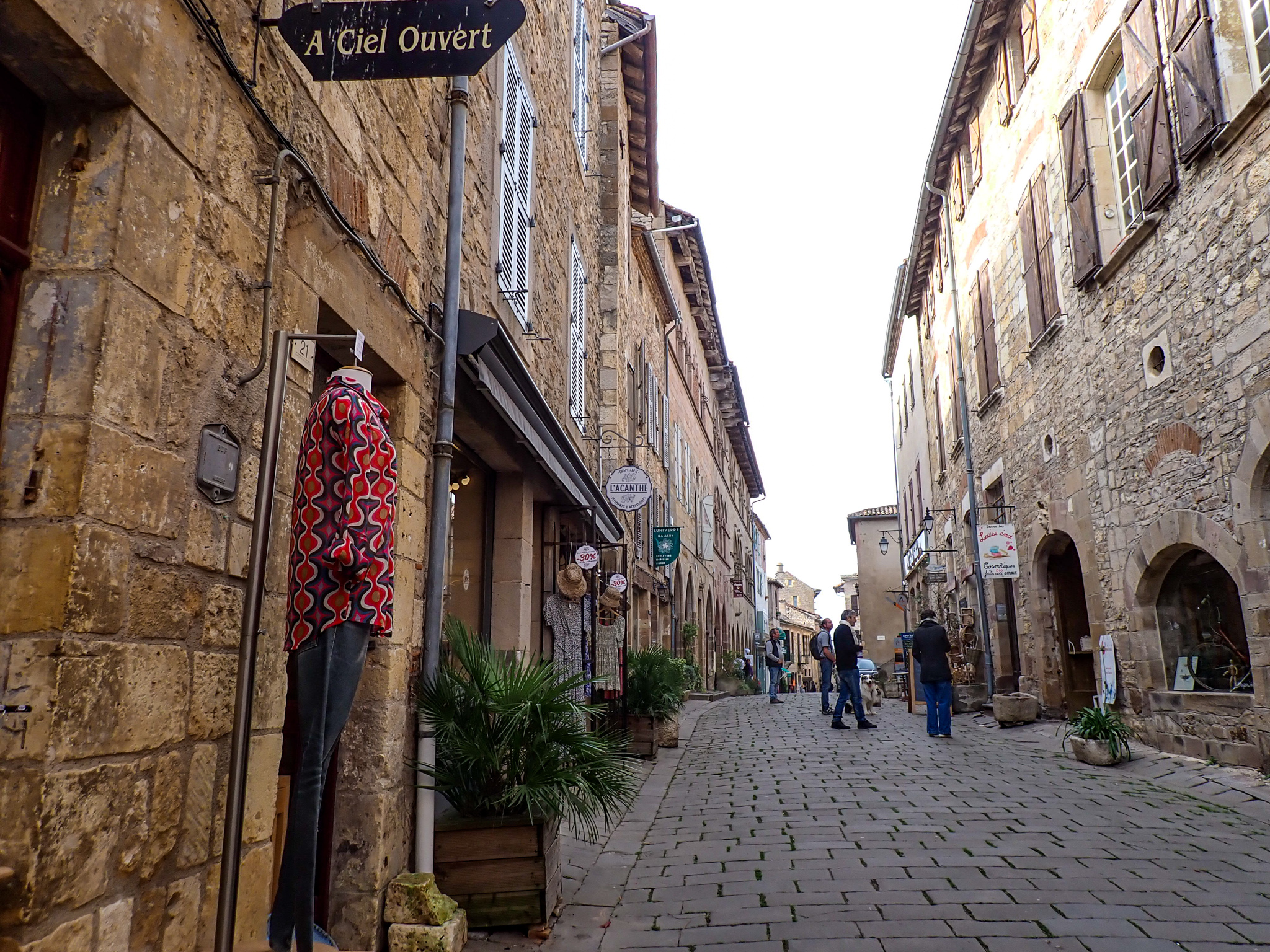 Finally, the ascent evened off to a gentle slope. We must have climbed for over half a kilometre. The street widened, and the homes, some with extraordinary gothic architecture, were grander. We passed textile and leather shops, trades that made Cordes vastly successful in the middle ages. I spied a particularly intriguing tiny museum dedicated to the art of chocolate making. 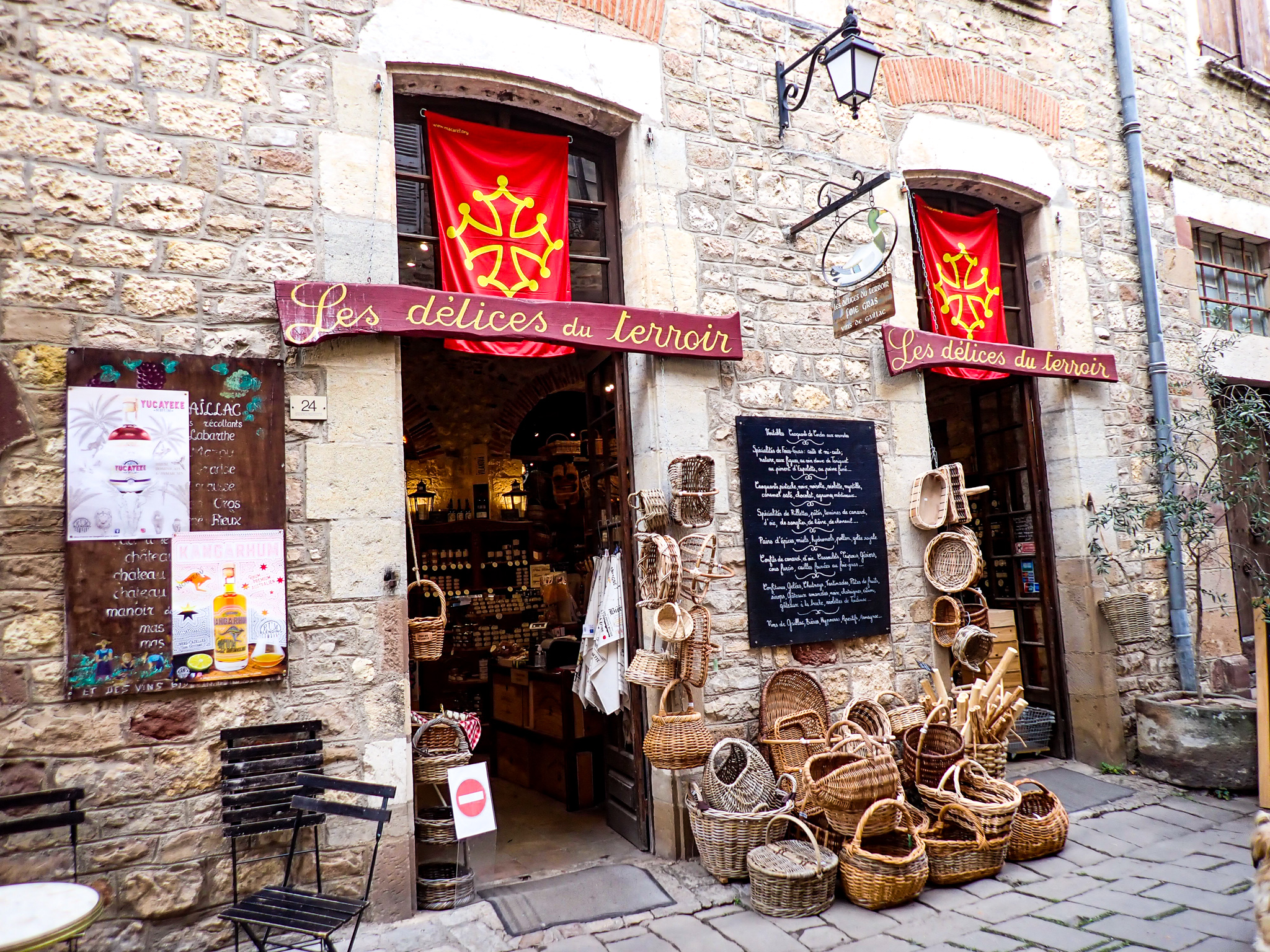 Above all else, Jack really does hate shopping. It was then that I decided to return at a later date with mooch-friendly pals. Having gamely clambered up that unrelenting hill, a stint of browsing would probably finish him off altogether. Instead, we admired the sumptuous villas, the Salle de fêtes, which had seen markets since 1350, and its extraordinary well. 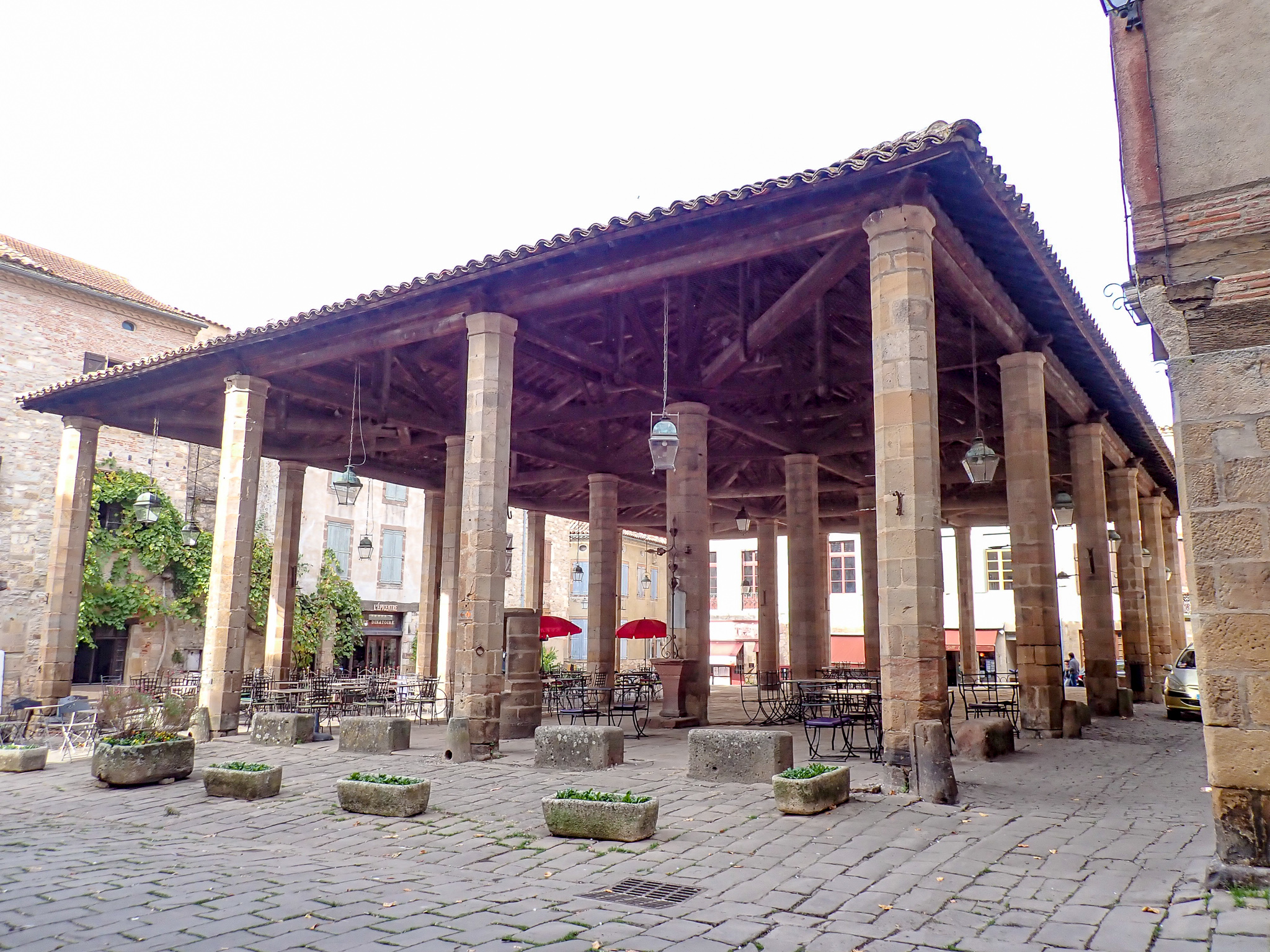 The well is an unbelievable 113 m (370 ft) deep. How on earth they managed to dig that deep, sadly, nobody knows. It’s logical to assume that it was excavated during the original fortification’s construction. And why? Probably to avoid the fate of other strongholds that had fallen from lack of water. But the ‘how’ remains one of Cordes’ great mysteries. 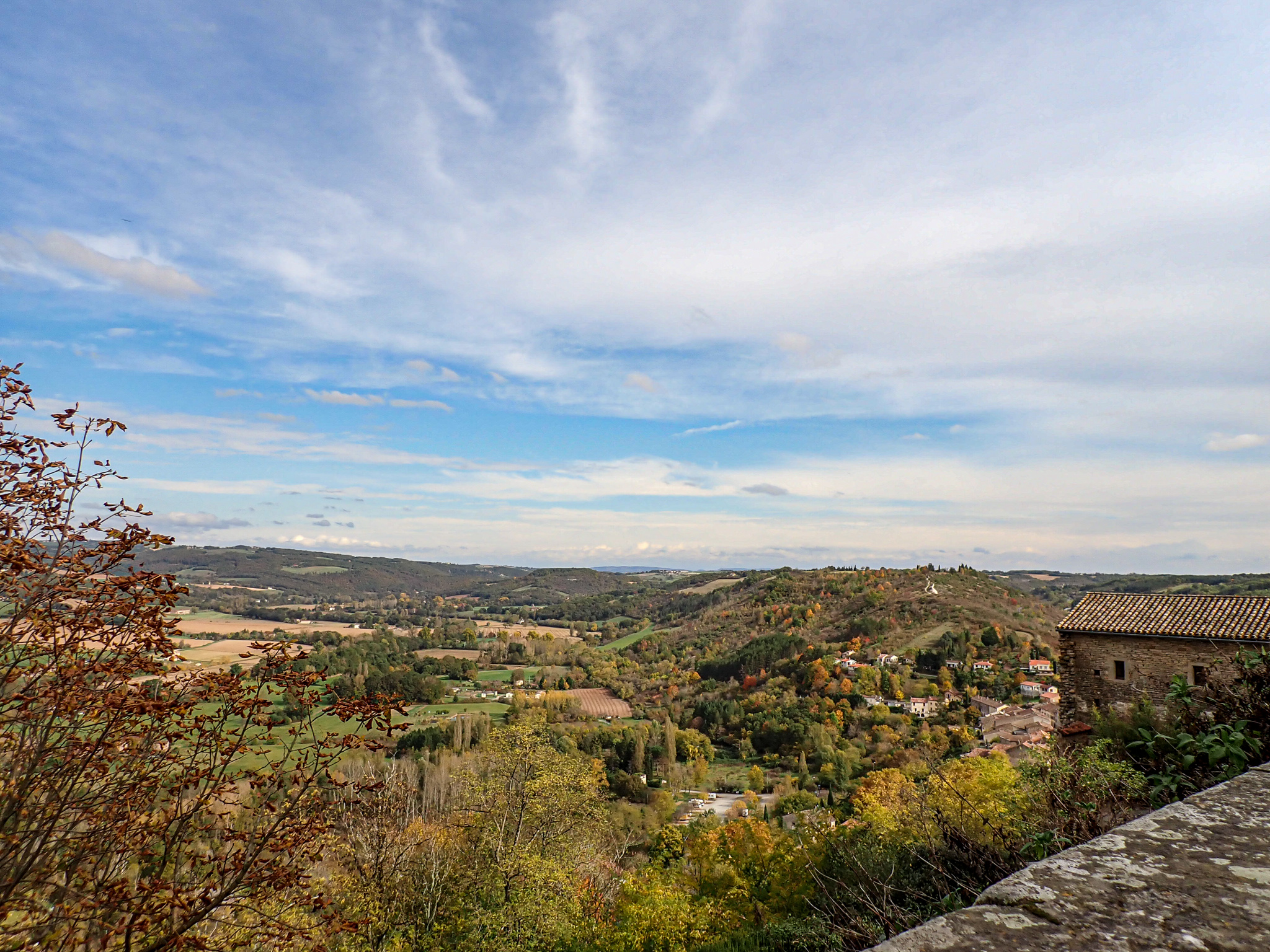 We strolled across reassuringly level gravel, past a restaurant to an external wall. Jack gave me a happy birthday hug as we admired the panoramic view over the Cérou valley.

“It was a bugger to climb, but I can see why you wanted to come.”

“Thanks, Jack. No wonder its name translates as something like ‘Ropes-on-Sky’! They say the foundations of the ancient city were presided over by the stars, and its location was chosen by fate. It’s why I was dying to see it. What an incredible place.”

“True. And you weren’t joking when you said ‘it’s up there’. Only problem is, we’ve got to get down again now. I knew we should’ve brought the car!” 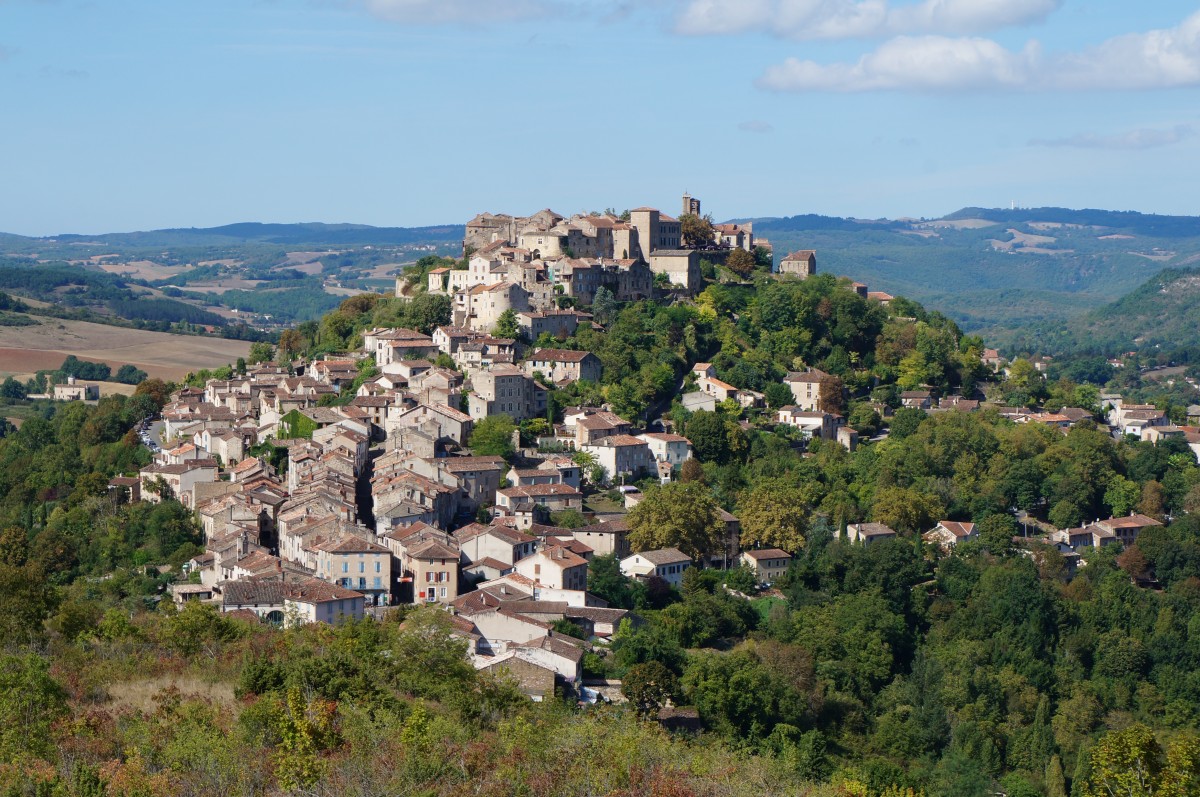