Ever considered the journey a bought apple takes before it reaches your fruit bowl? As I found out, it’s pretty involved. Our domaine is bordered on one side by a fruit farm called Lebrun, and it’s big. With over 160 hectares (395 acres) of apple orchards, that’s a lot of fruit.

Our Lebrun neighbours are incredibly kind folk and ridiculously generous when it comes to offering fruity gifts. Crates of apples are regularly left on our doorstep. No note, no message, just the tell-tale company packaging betrays their secret gift-giving. 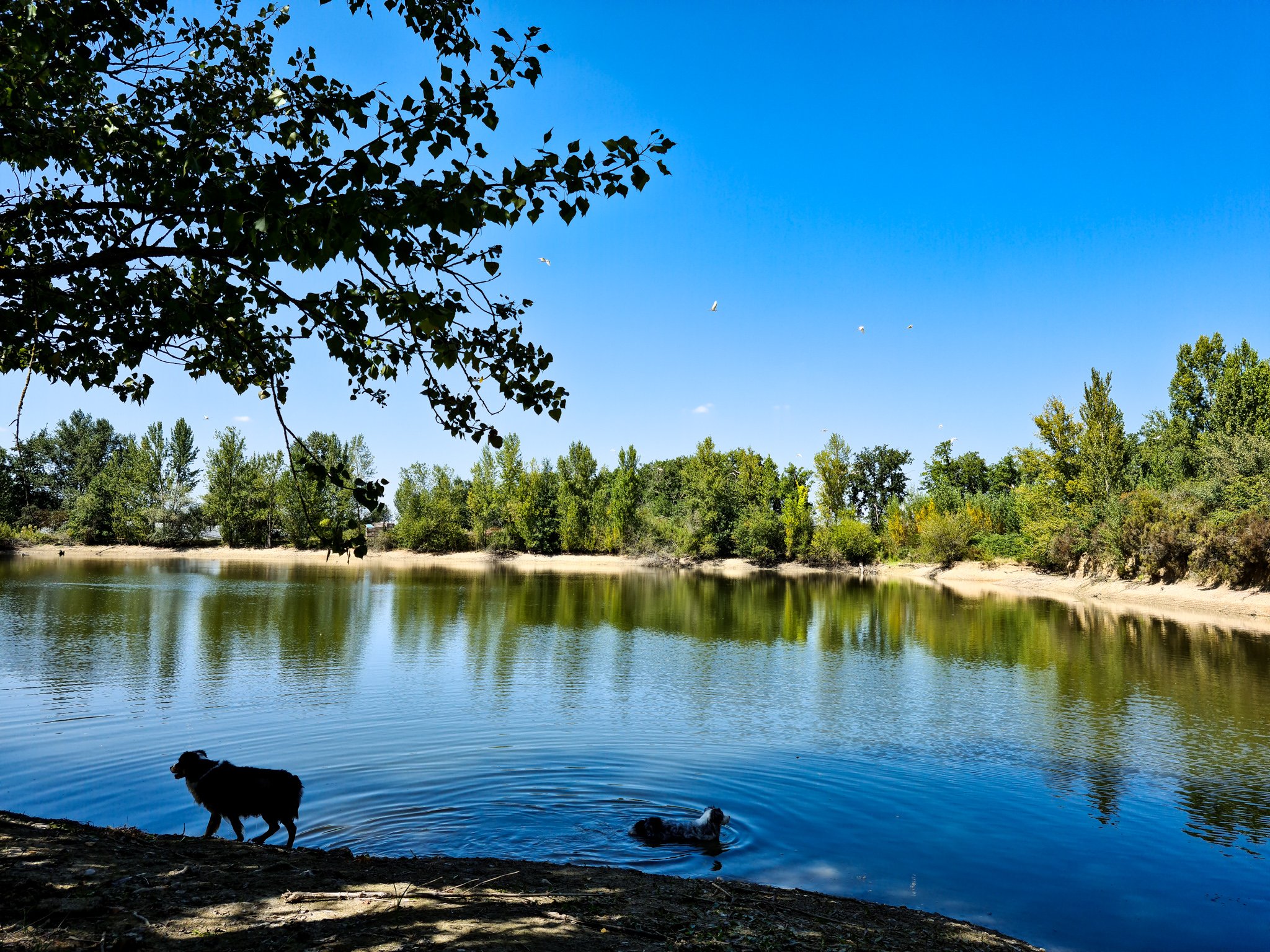 The dogs and I are encouraged to trek through their manicured orchards. We take advantage of this by nature watching at the two remote reservoirs, enjoying apple snacks during the season as we roam. And although it’s a serene, peaceful area, there’s often activity.

In addition to the permanent workers, teams arrive from Spain, Poland and Bulgaria to undertake specific seasonal jobs. Some are pruners, espalier specialists, who train branches in a two-dimensional plane – there’s a canny knack to that. Others are tree maintenance crews. There is a grafting group armed with pots of special growing gunk and lots of pickers. 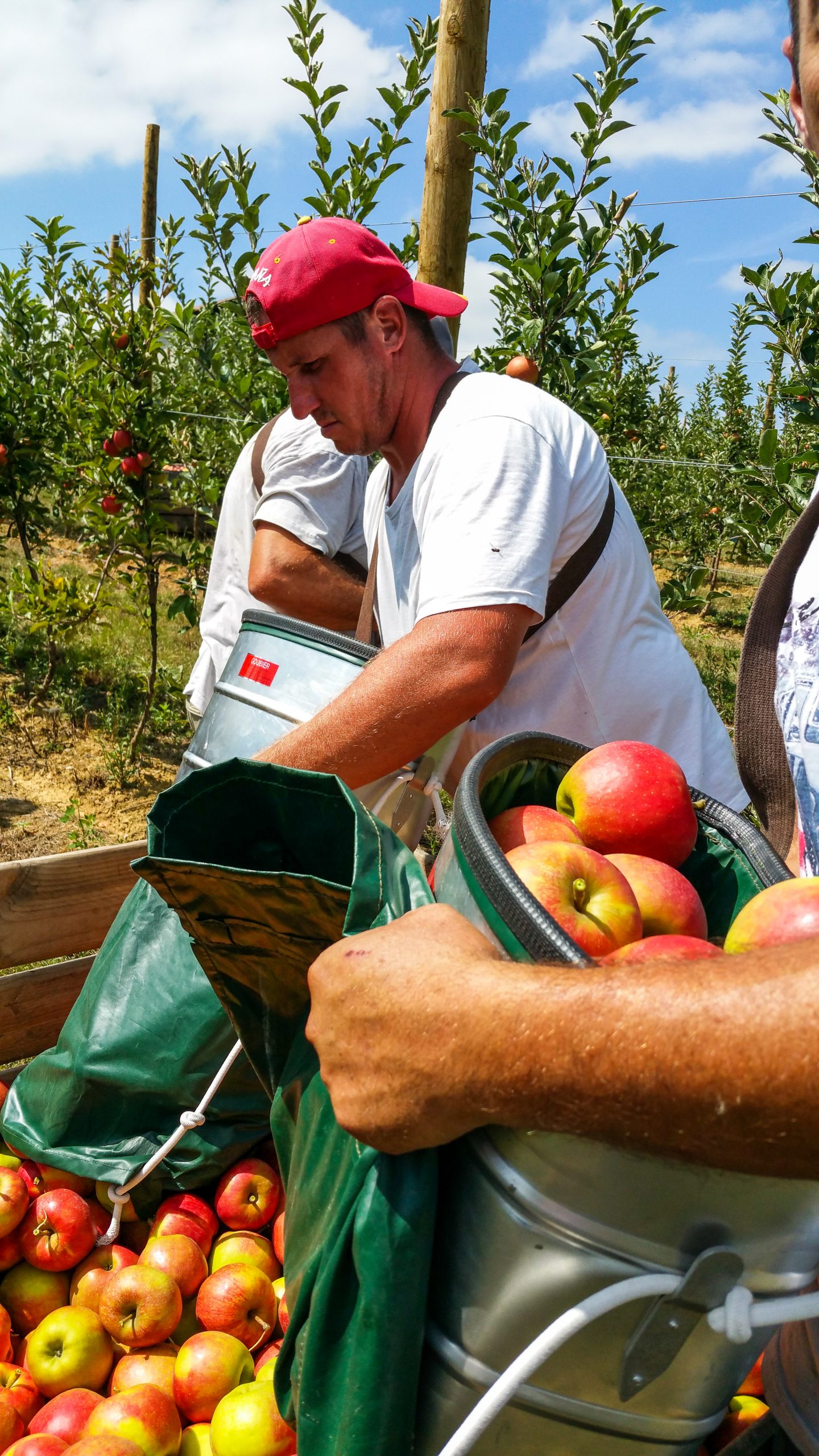 I might not be fluent in Spanish, and I haven’t got a clue how to say hello in either Polish or Bulgarian, but we can all manage a hearty ‘Bonjour!’ which does the job. Serge, one of the permanent employees, will usually be in the thick of things. He’s one of life’s delightfully nutty characters. He’ll press apples into my pockets, hands and the dogs’ mouths. Then he’ll grab an apple and take a chunk out of it to show me le crunch! It’s a pretty impressive display for someone with so few teeth. I love people like Serge. 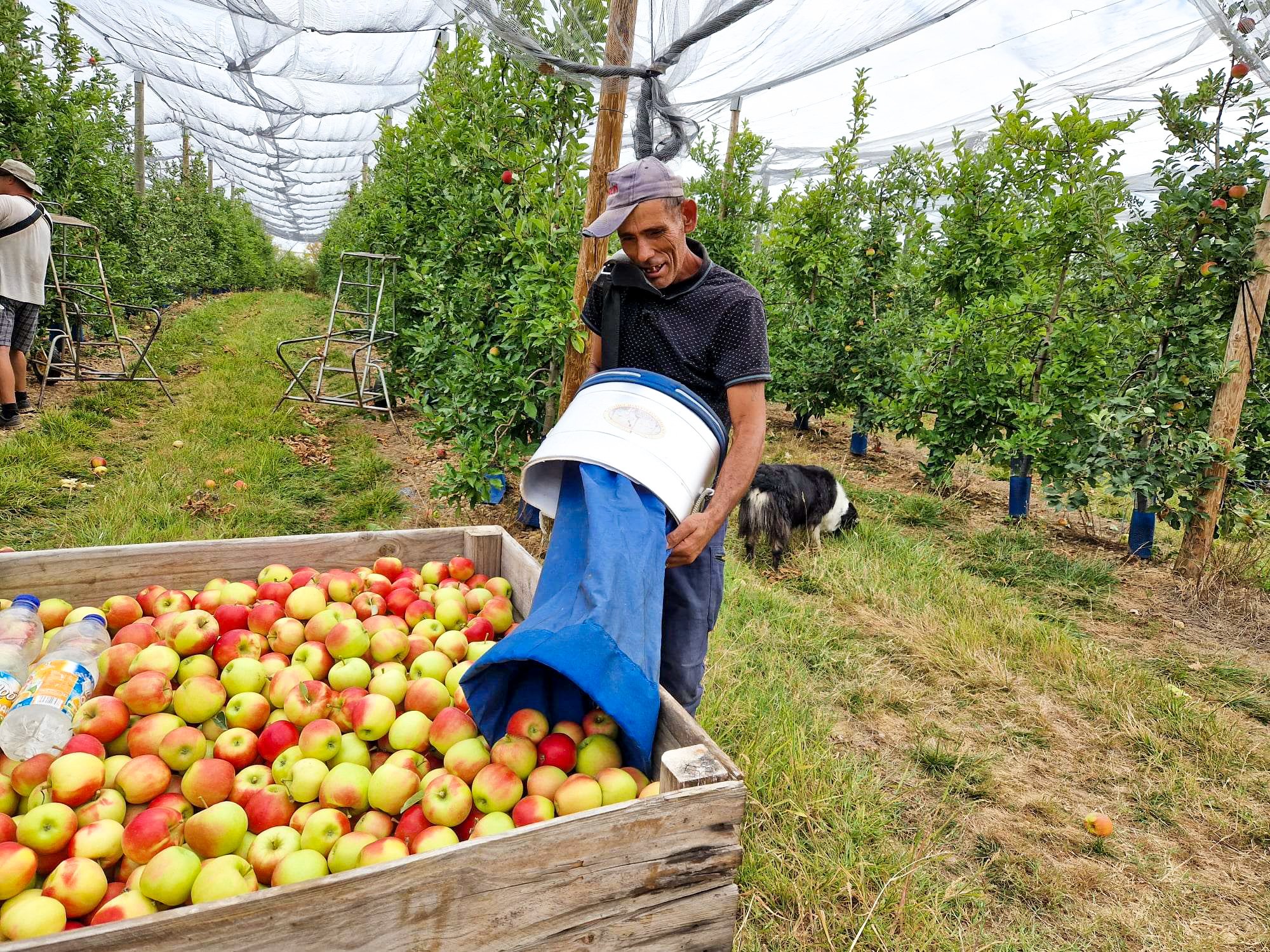 With the harvest usually starting in early August and finishing now, it’s long. For ages, I’d been dying to know how the fruit was processed in the packing station and recently discussed it with Jean-Pierre, one of the Lebrun owners. Indulging me as always, he invited me along to have a look. 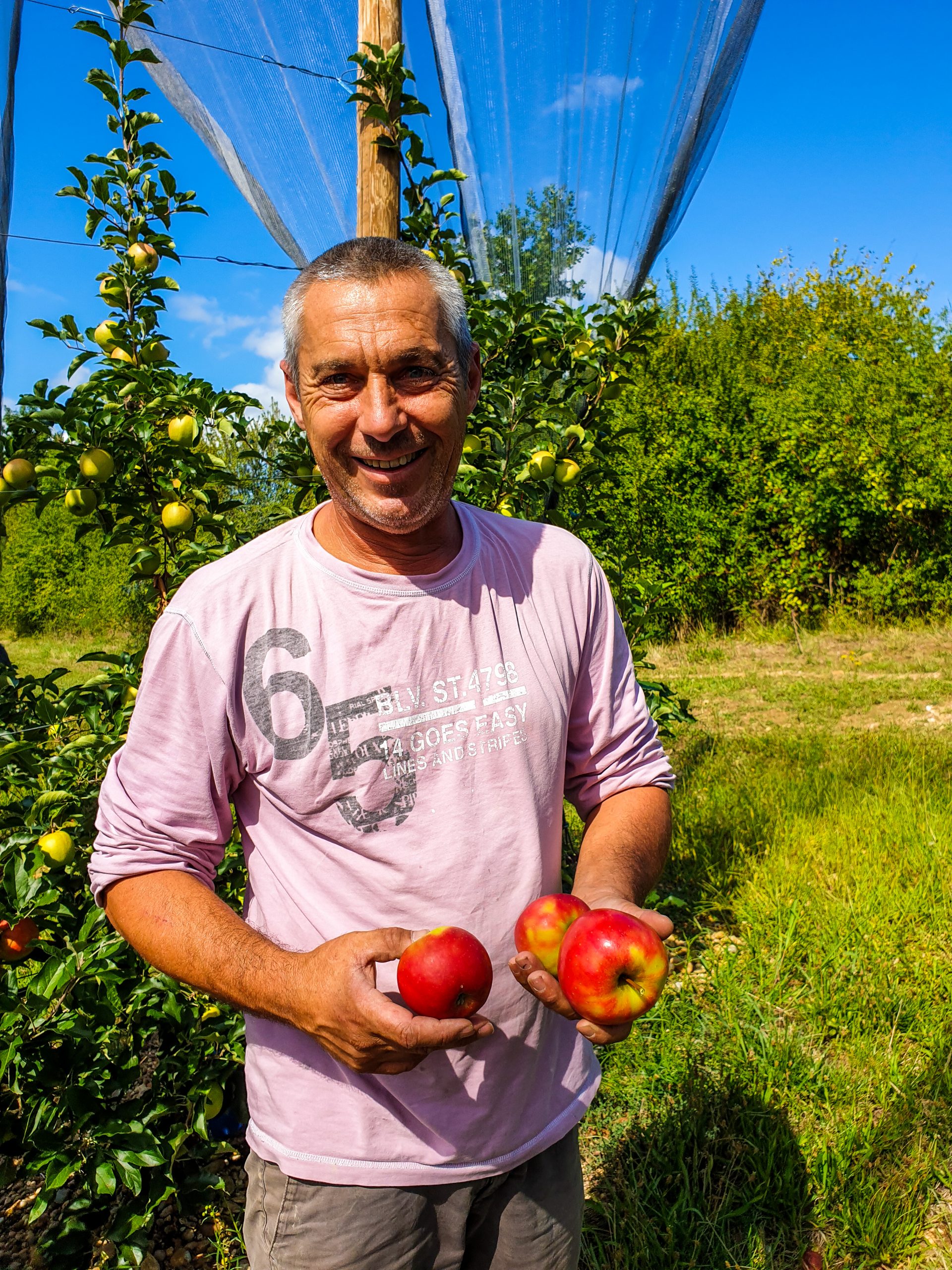 I turned up at the packing station for my tour. It was late in the day and relatively peaceful. Jean-Pierre was joined by Benjamin, the joint owner and another top chap, who gave me some starter facts. Did I know that Poland was the leading apple producer in Europe, followed by Italy? No, I didn’t. France is a creditable third.

A tractor trundled past as we walked to the processing plant. It was stacked with pallets similar to those I often watched being filled in the orchards. I knew that the apples were exported but to where? Benjamin explained that 80% of the fruit was shipped to many parts of the world, including Saudi Arabia, Colombia, China, the UK, Finland, Spain, Vietnam, but not the USA, which, he assured me, has plenty of their own excellent pommes. 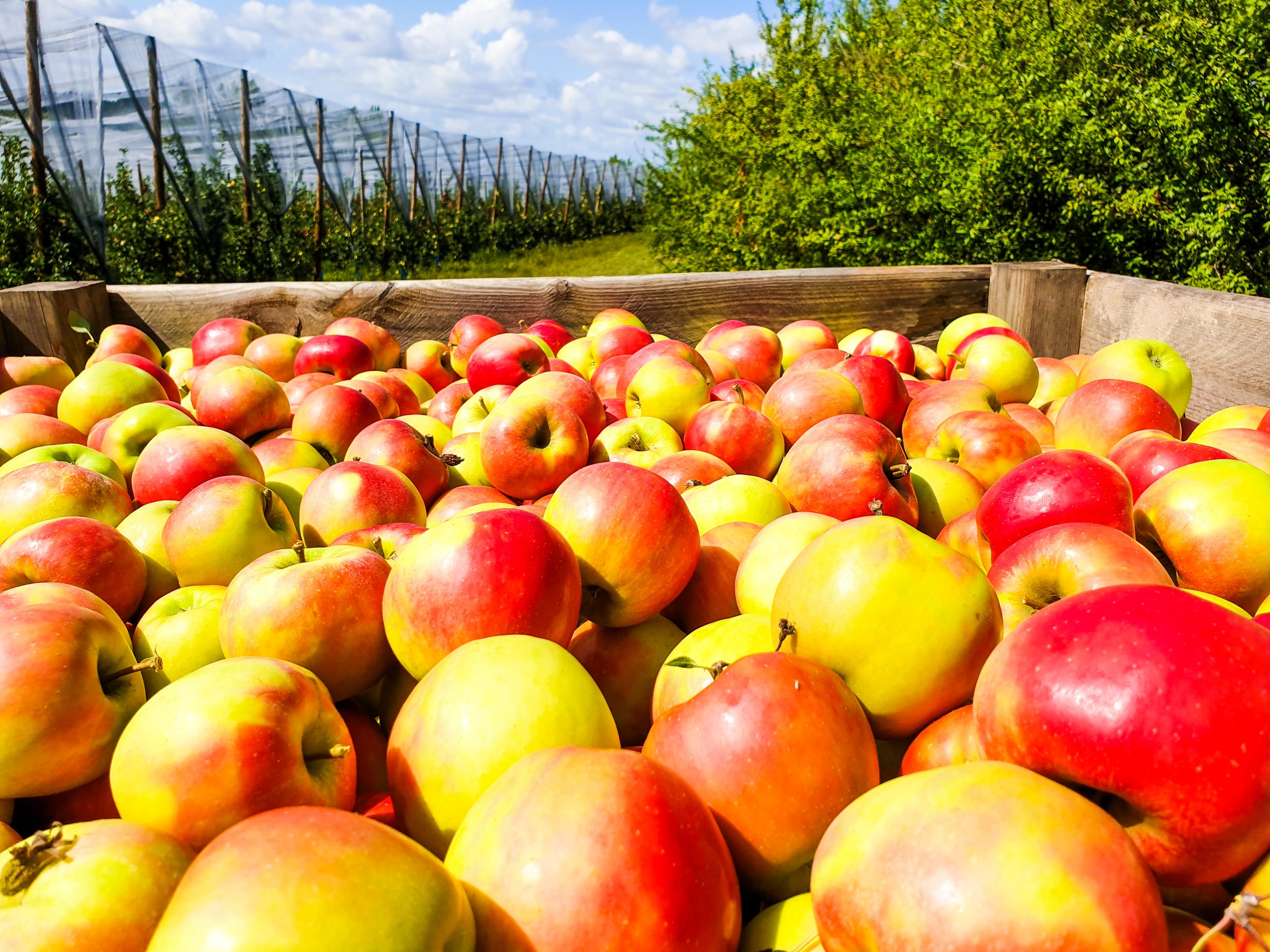 Each country has its favourites. Of the fifteen varieties grown at Lebrun, Elstar is the first to be harvested and favoured by the Germans and French. Universally loved are the Gala and Granny Smith, Jazz, too. Some types are crunchy. Others are like the French Chantecler, preferred by the Canadians and Greeks is quite soft. The flavour is mild, basically sweet, but with some acidity. They’re very popular with the French. Of course, everyone is a fan of the Pink Lady.

We had reached the first section of the packing station. To help picture what I saw, close your eyes and imagine an industrial conveyor belt where a product is transported from one process to another. It briefly stops several times and undergoes different treatments before completing its journey. Now add water. 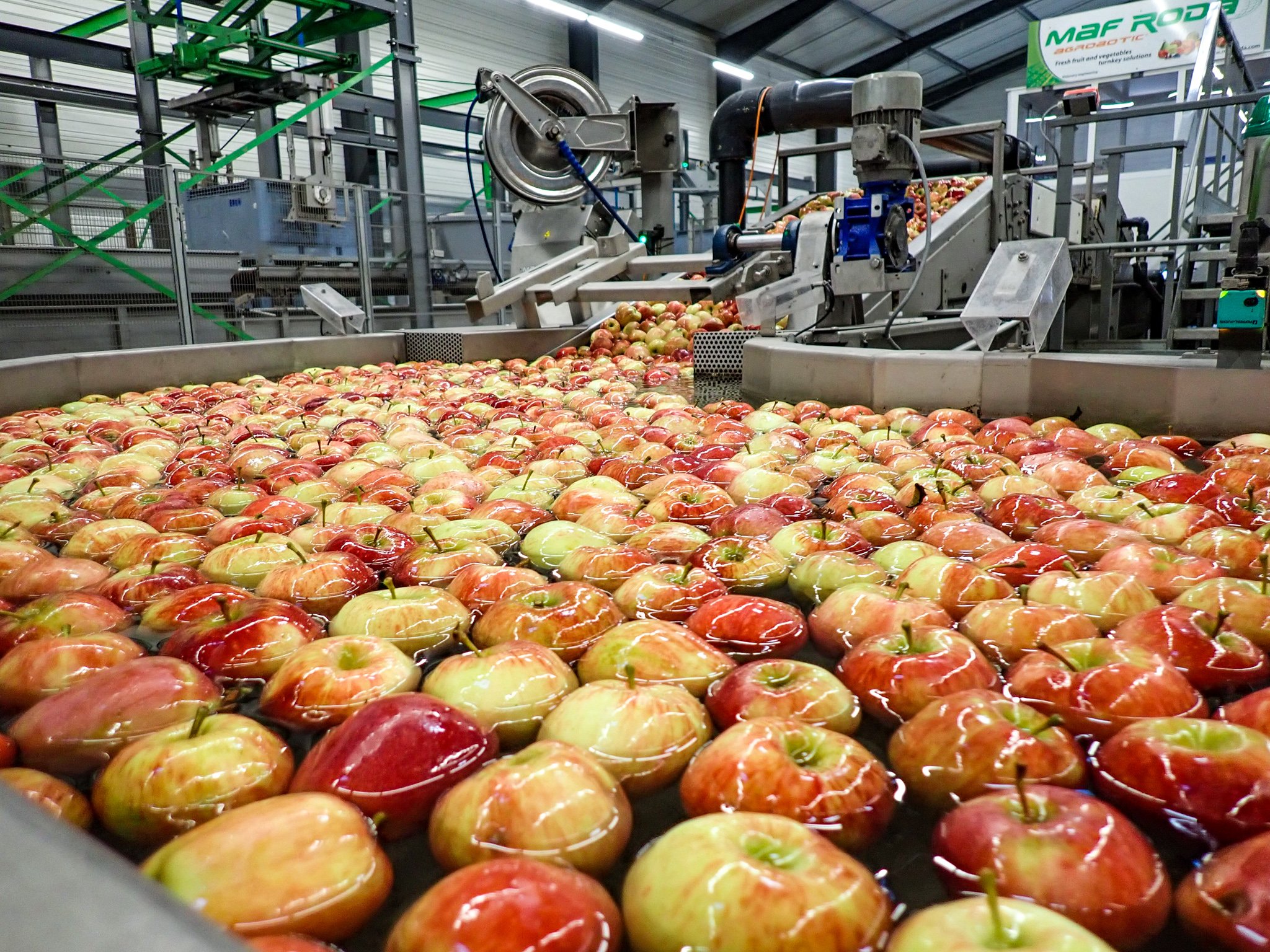 Ahead of us was a multi-level Mad Max-type machine assembly on raised legs. It was marvellous! A watery conveyor system propelled apples, bobbing along at a steady pace, and there were masses. I suddenly had an irresistible urge. It was one of those situations where you know you shouldn’t, but you do it anyway. I sneakily dipped my hand in the running water. No problem there. It seemed as though the temptation was commonly felt. 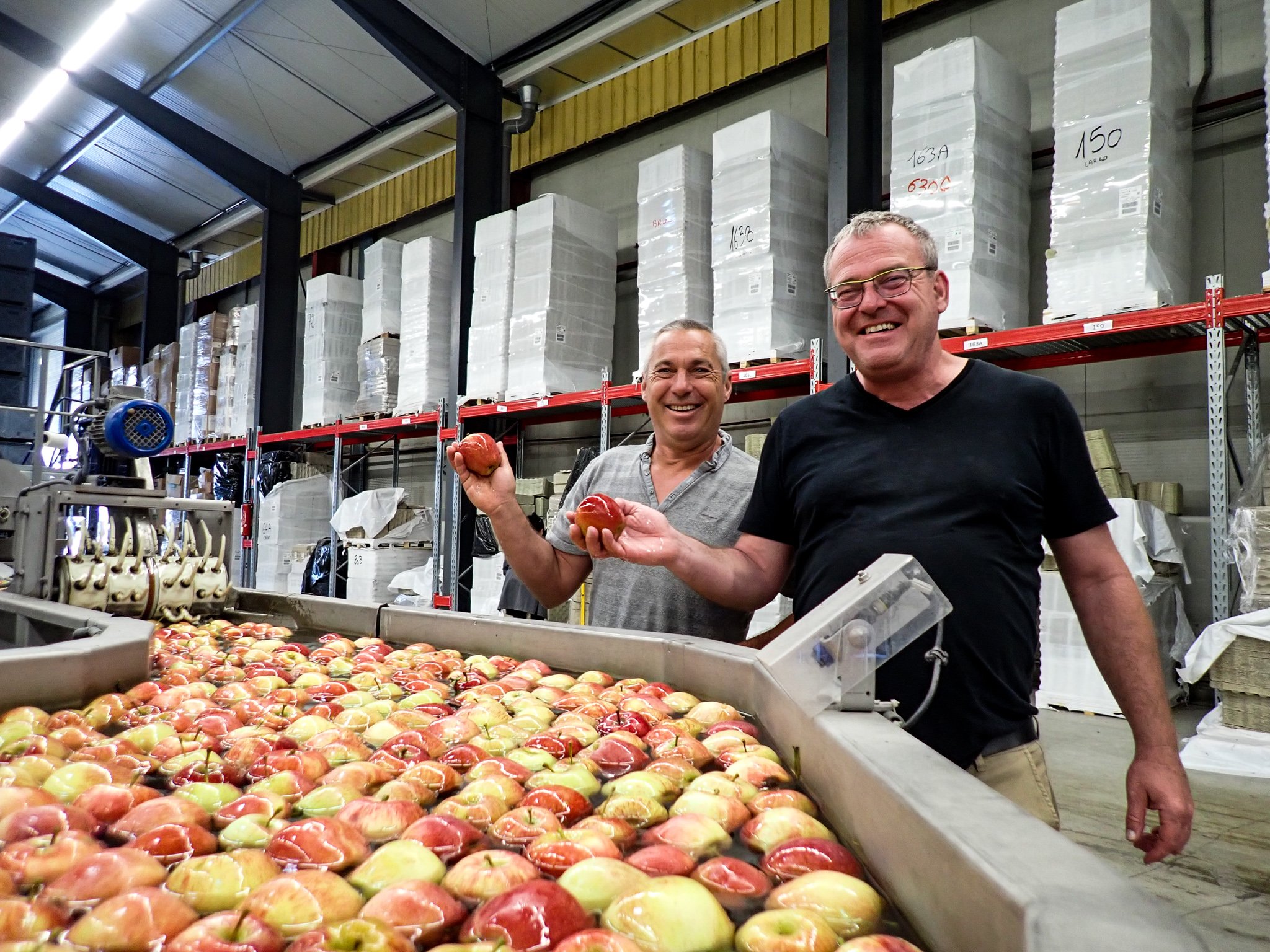 Loving their equipment as much as I did, Benjamin explained that once the apples are decanted from pallets, their watery passage involves several different stages, starting with a pleasant shower. 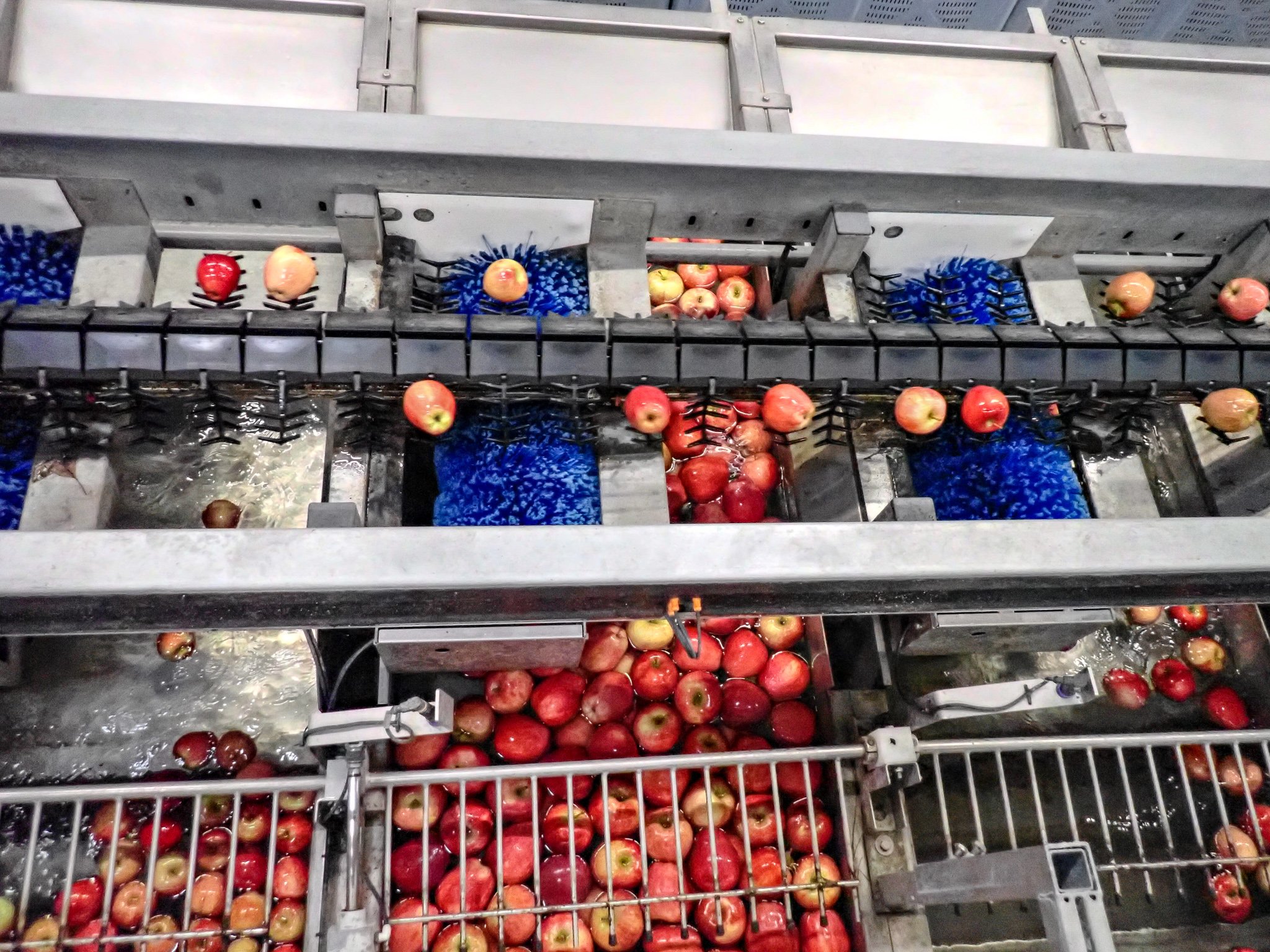 We walked into the vast contraption’s engine room. Computers were running. A monitor displayed what I thought were random photos of apples. Jean-Pierre wagged his head. Not so. Every single apple is photographed twenty times. Benjamin told me why. 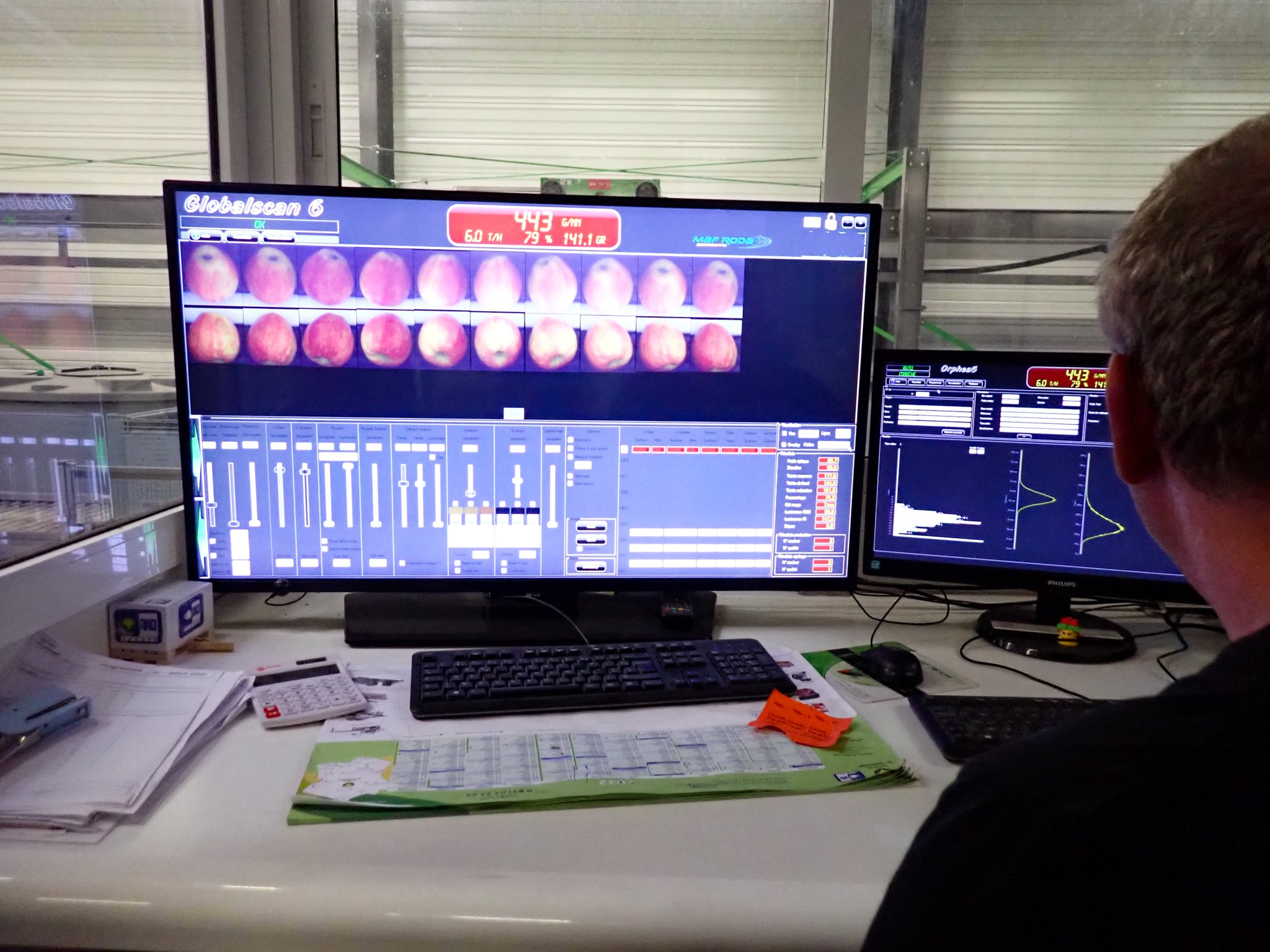 Each apple is measured against three criteria: Weight, skin defects and colour. Once categorised, they are automatically sorted. I watched, riveted, as apples bowled past me, directed towards different channels.

“Look at this channel,” said Jean-Pierre, “can you see the differences between these apples?”

“I think so. Some have marks on them?”

“Yes, exactly. These apples are imperfect for many reasons. The size is poor; the apple has defects, or the skin is too clear.”

“So what happens to these? Are they thrown away?”

“Ah, non! These apples are used for apple juice.” 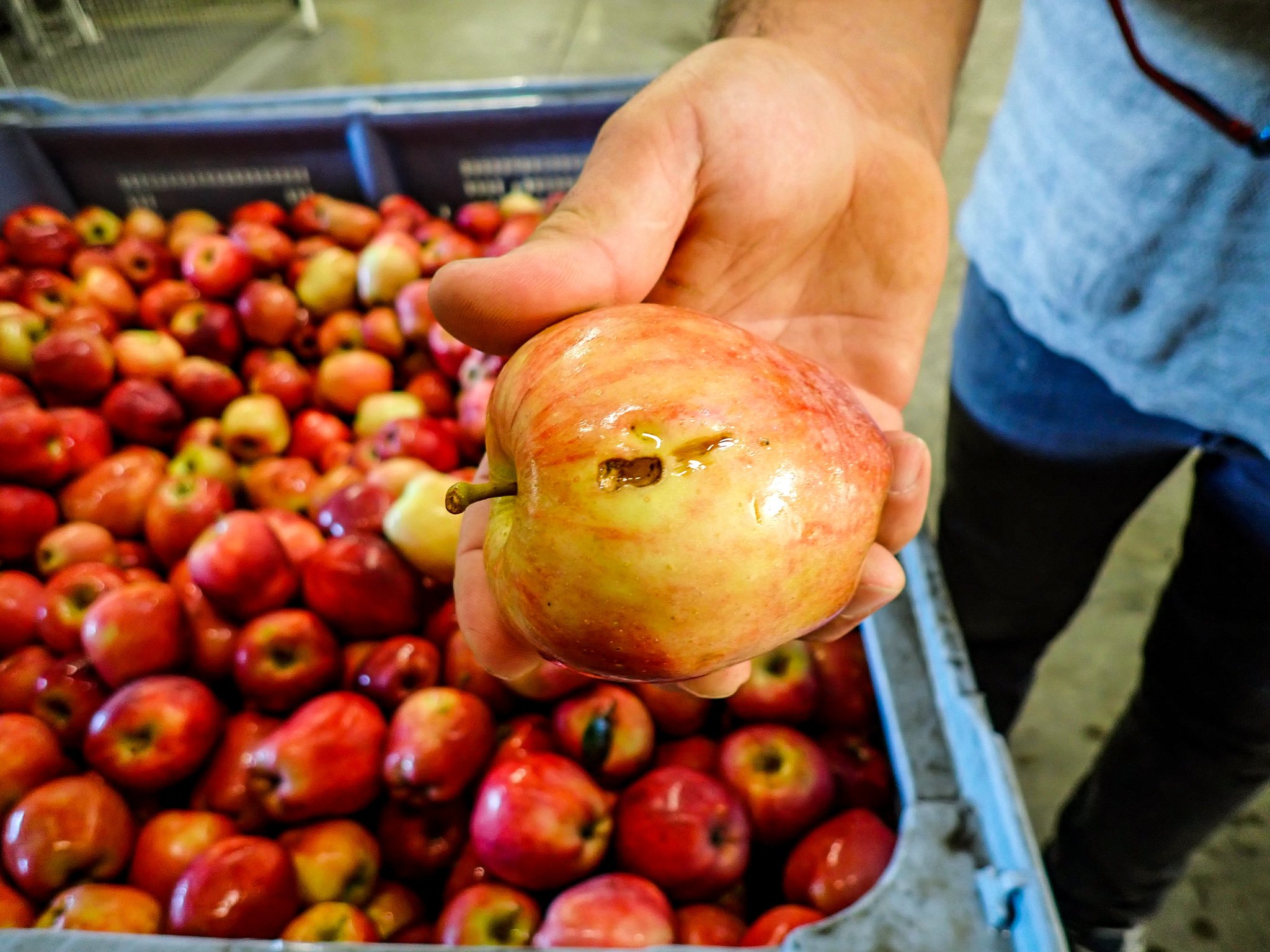 Impressed, I followed his beckoning finger.

Intrigued, I followed Jean-Pierre through a door into a vast abyss.

“Wow,” I shivered, “so this is what the inside of your tall building looks like. It is cold.”

“Once the apples have been categorised, they will be temporarily stored here in boxes before packaging.”

We walked a little farther along the inspection walkway.

“It’s hard to tell because it’s dark, Jean-Pierre, but the building seems so big. Who does the stacking?”

“The building is twenty-five metres high [82 feet]. Computerised robots do all the work here. They create labels for each pallet and store them in same-type category.”

As I listened, there was a soft clunk as a mighty robotic arm effortlessly propelled a pallet to its new slot. Strangely captivated, I wanted to stay longer, but my toes were beginning to feel a tad frostbitey. Benjamin rescued us with a ‘Regarde!’. 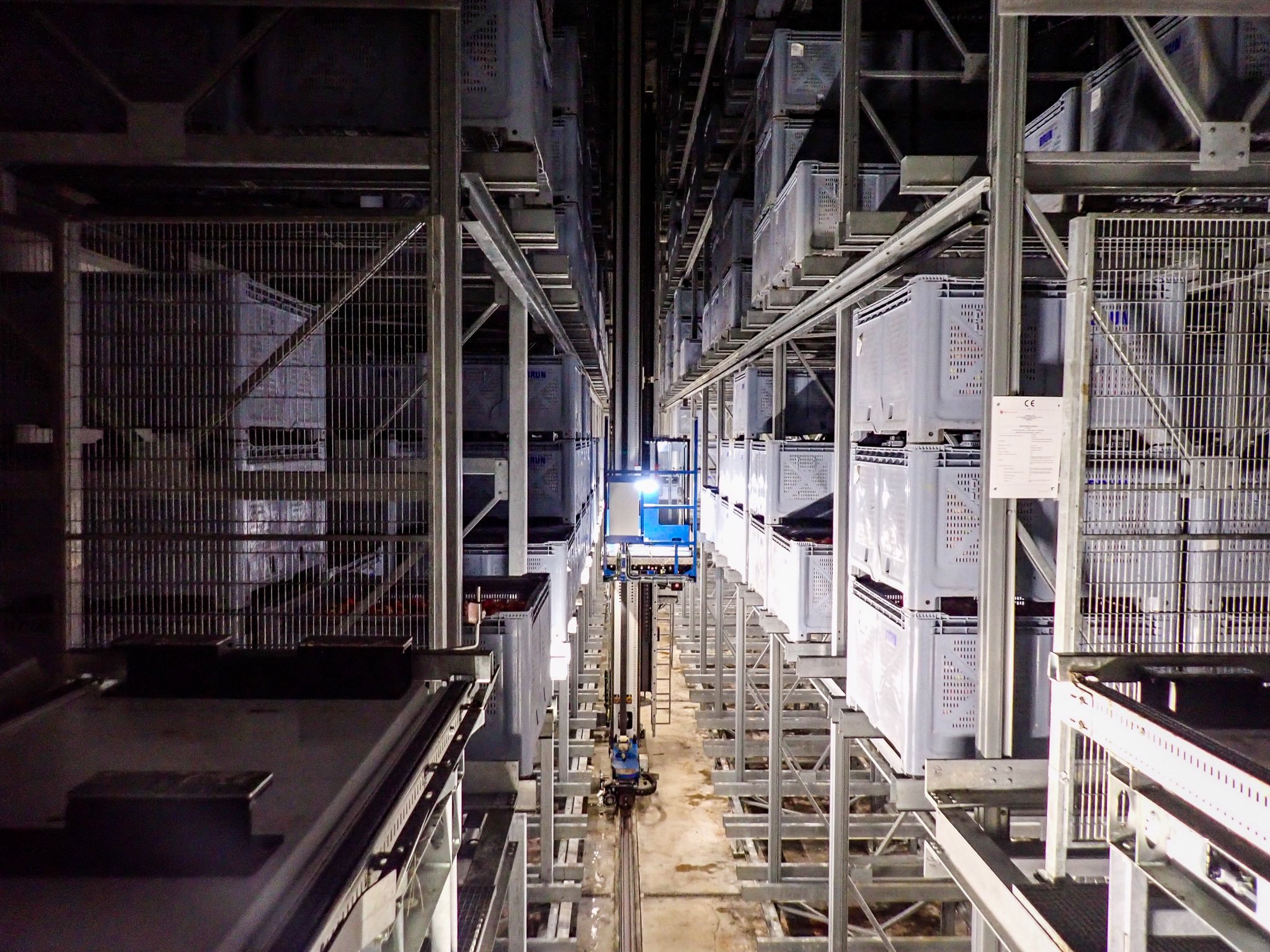 We walked into the warehouse packing area. It was sparklingly clean like the other areas and blissfully warm.

“We have an energy-saving policy here,” smiled Benjamin. “It’s heated by hot air ducted in from the cold store’s outside heat exchanger.”

I watched frigid apples appear on a dry conveyor belt. All exactly the same. Here they were dried and buffed up. Some would be waxed, others not. It all depended on the client’s specifications, stored on the computerised label.

Mesmerised, I followed the smoothly running belt to a new section. Here, every apple was hand-picked and placed into pre-moulded cardboard containers. Packers watched the apples as they passed, scrutinising each one and removing defective miscreants who had escaped the earlier vetting session. Were there quality checks in place? Of course. 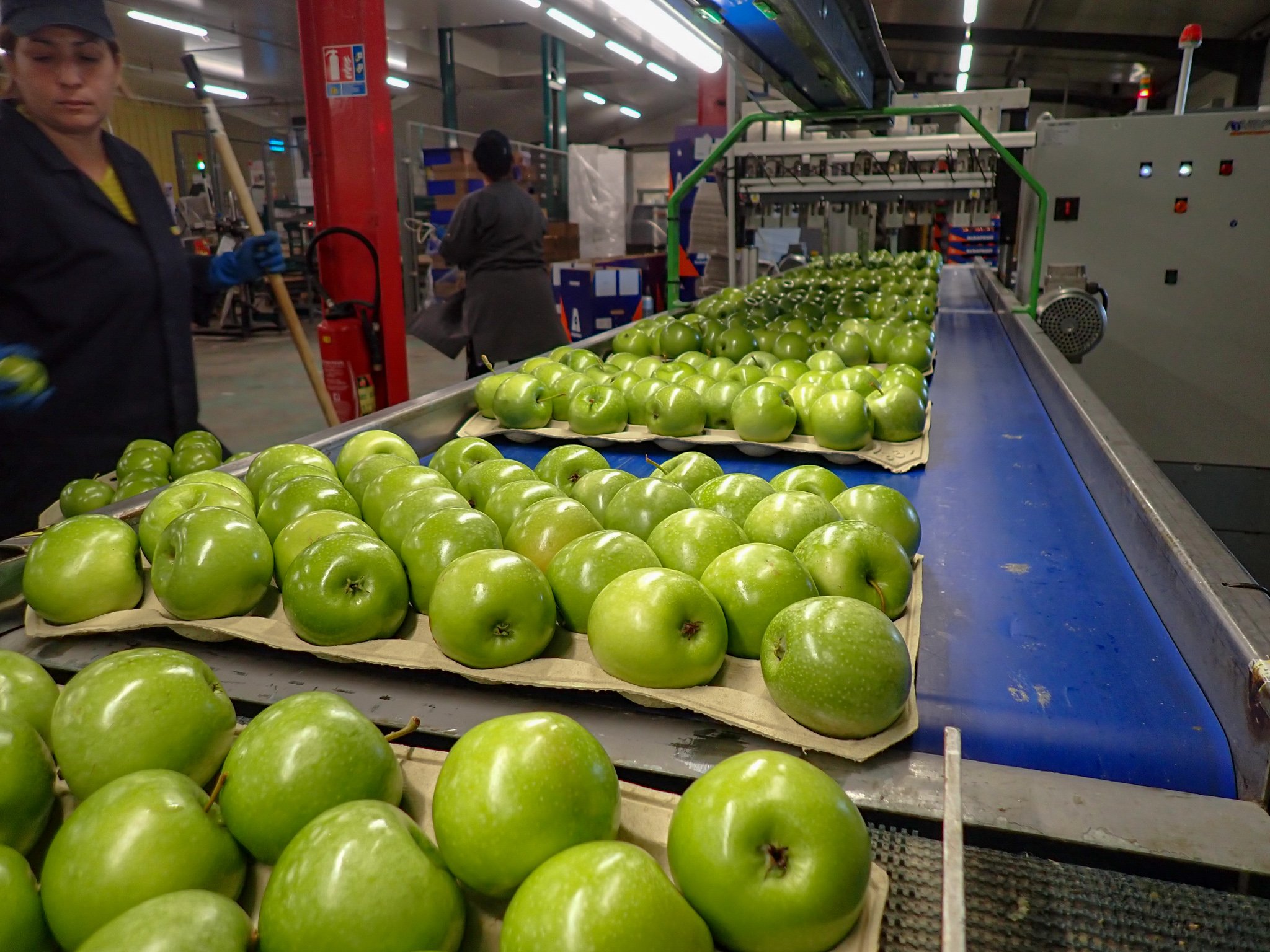 Jean-Pierre said that for every packing order, apples are randomly selected. They are checked for sugar, acidity, and weight levels using a precise measuring tool. Any flaws and the order is removed. 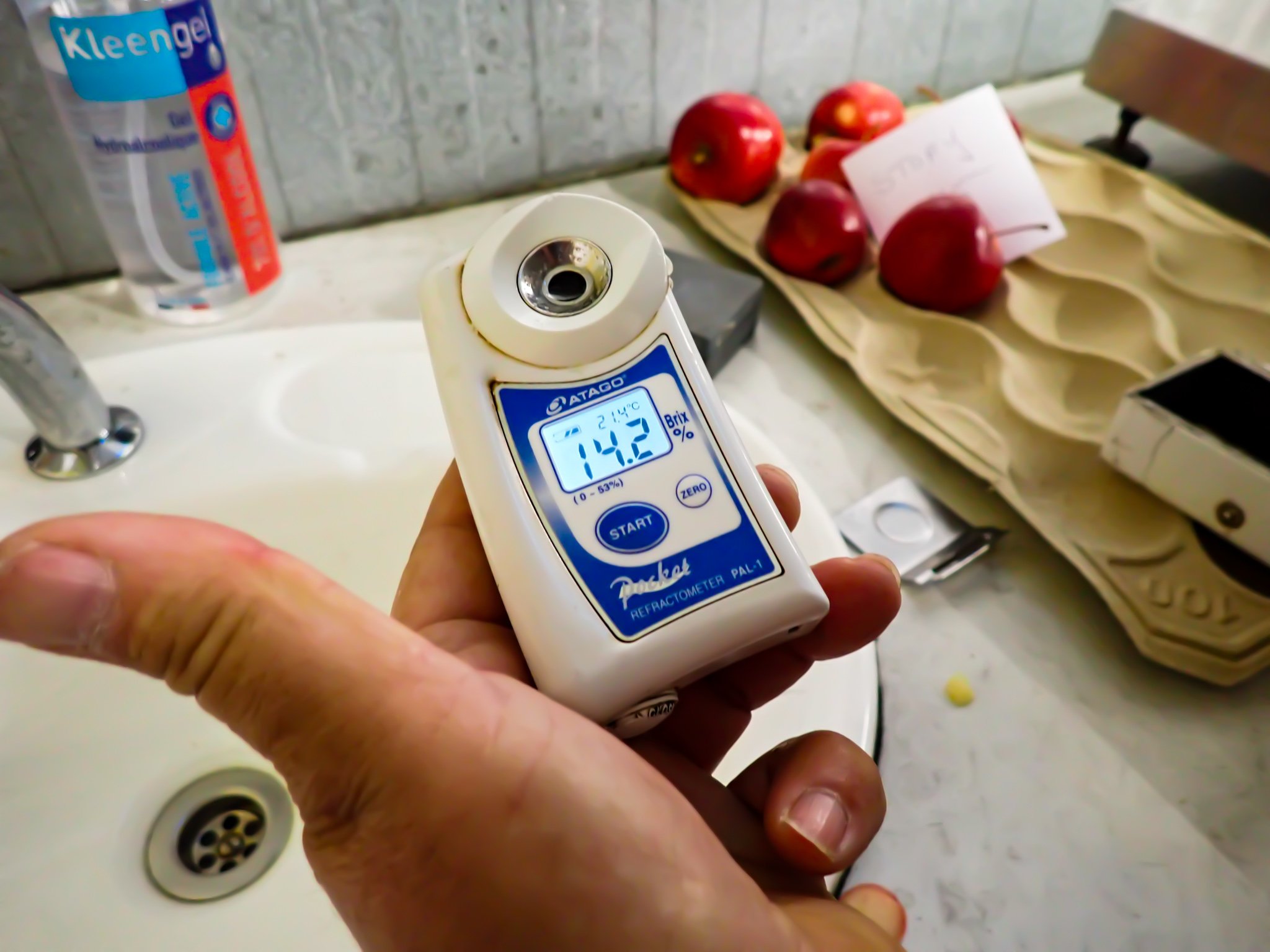 High standards such as these have enabled Lebrun to become a BRC-certified site. The British Retail Consortium, which first published its Global Standard for Food Safety in 1998, is the gold standard of its type favoured by retailers such as Tesco and Morrisons. That’s a huge thumbs up for the team. 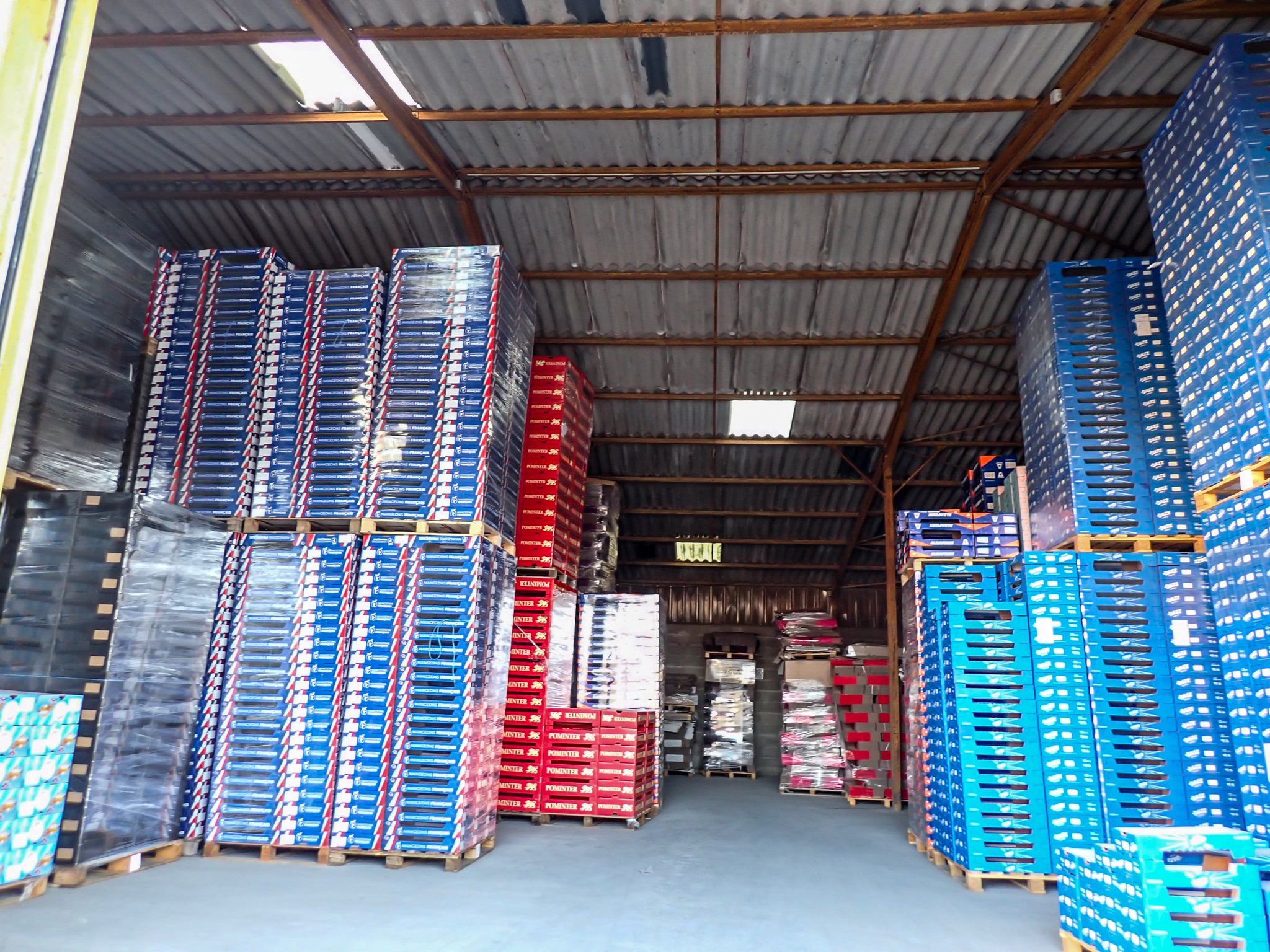 We walked back out into the yard and the storehouse, where hundreds of crates were awaiting shipment. Next door was the loading bay with a stacked lorry waiting to depart – the final link in the apple sausage machine. The men nodded, satisfied. It was another job well done. 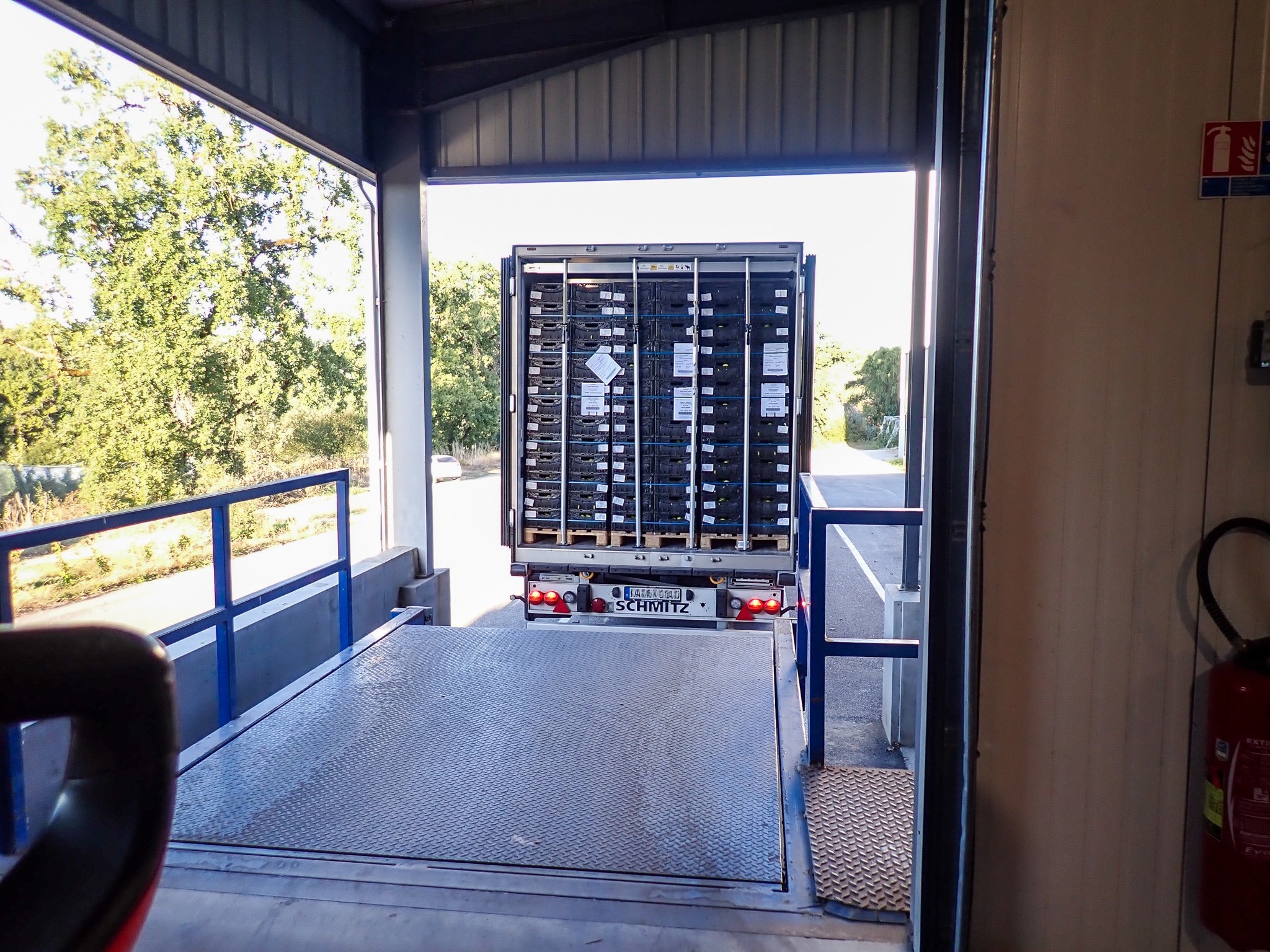 I reflected on what I had learned. I now understand the meticulous journey every apple takes to reach our fruit bowls, and it’s quite a ride. Thousands of tonnes of apples are grown, nurtured, processed and shipped from the Lebrun packing station every year. They recycle their energy where possible and never use plastics in their packaging materials. Their standards are incredibly high. No wonder Jean-Pierre and Benjamin are so proud of their business. 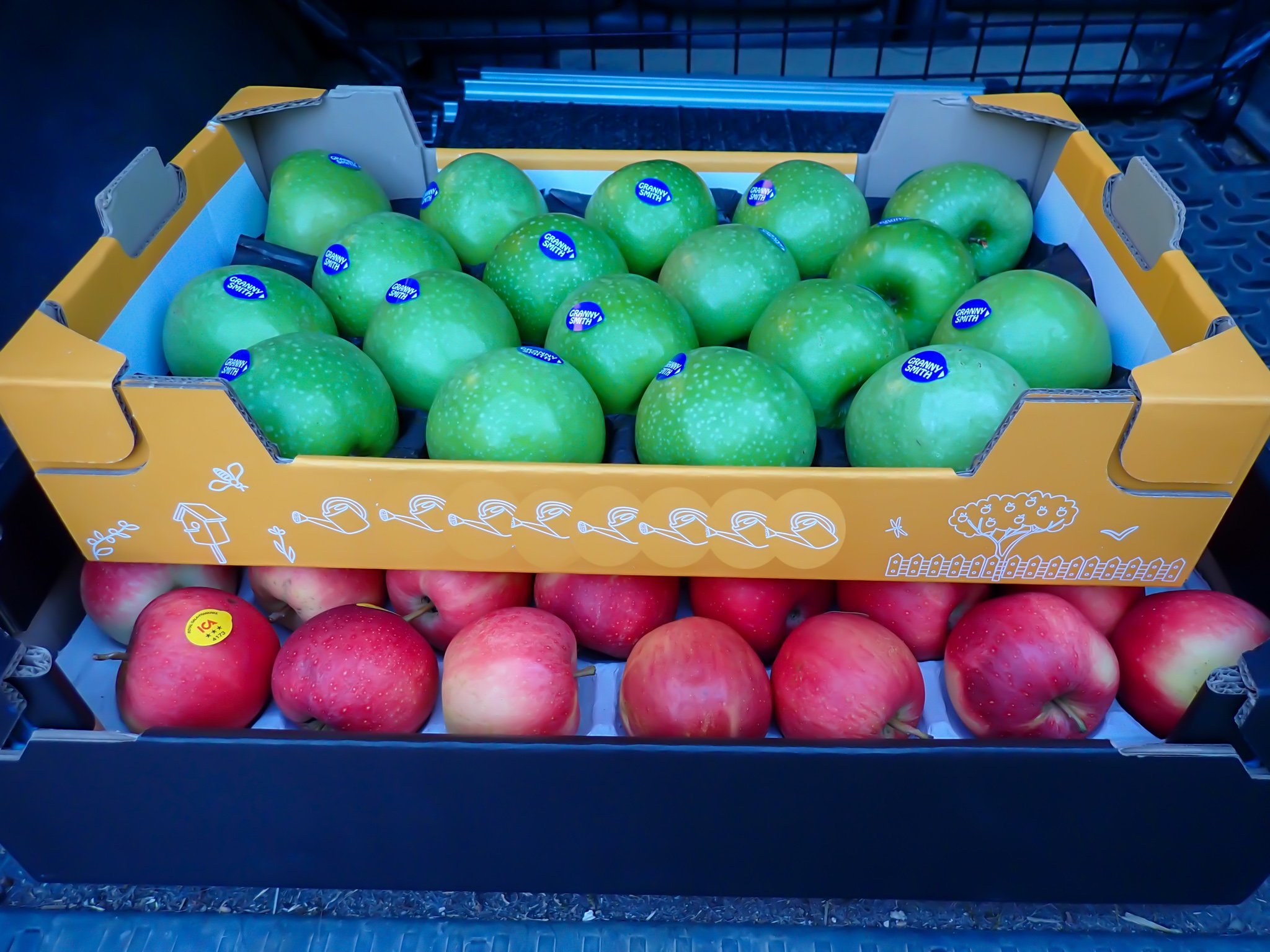 As we returned to my car, I realised that my tour had eaten into Jean-Pierre and Benjamin’s evening, but did they care? Not a bit of it. Smiling, Jean-Pierre told me to open the car’s back door. Inside there was a gift to mark my visit. I honestly had no words. As I pulled away, they waved, making me promise to bring Jack over for an apéritif soon. There’s no doubt about it; we have fantastic neighbours. 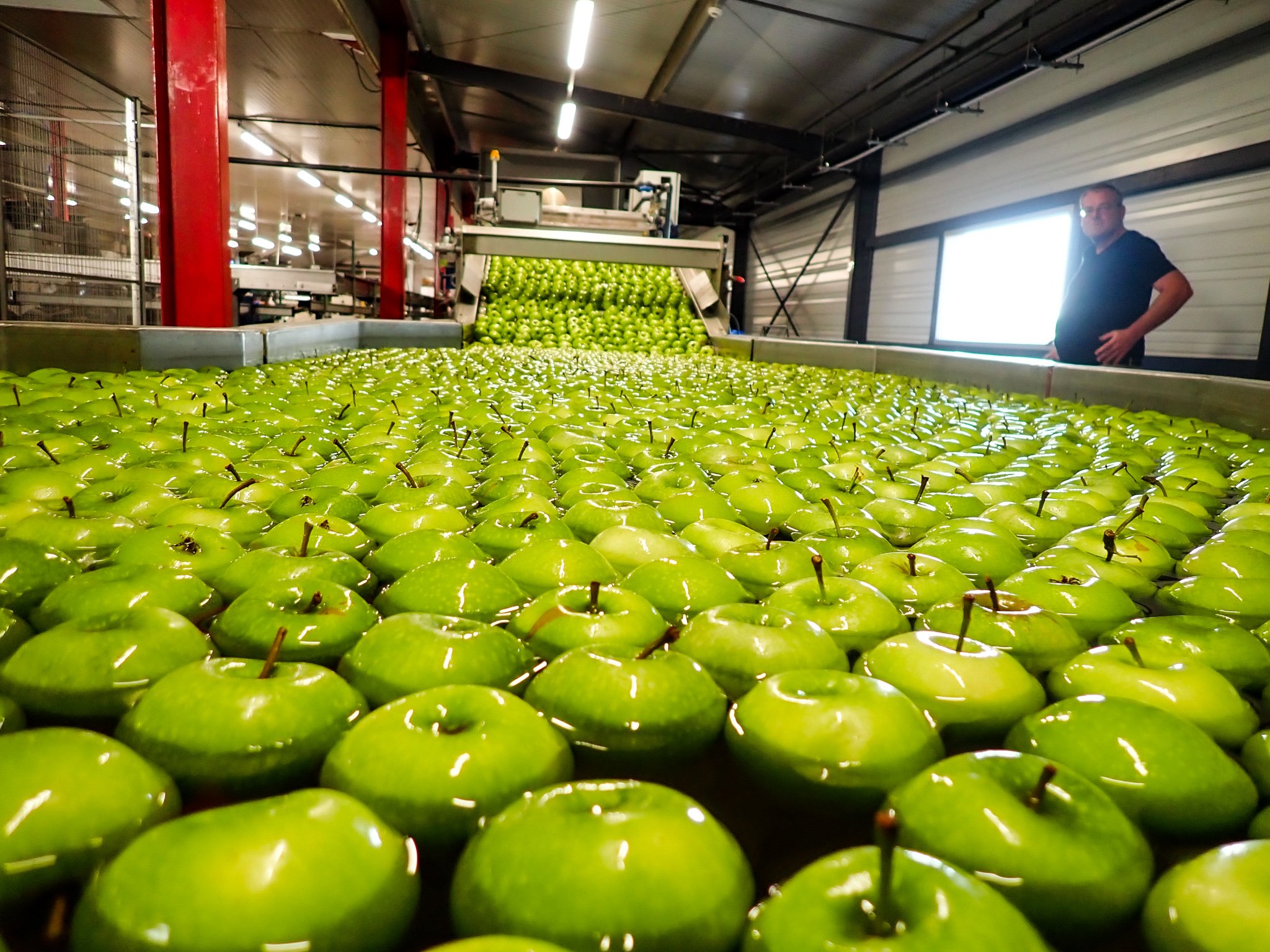 So the next time you pick up a bought apple from your fruit bowl, so long as you don’t live in the US, it might, just might have come from Lebrun. If so, you’re in for a treat. 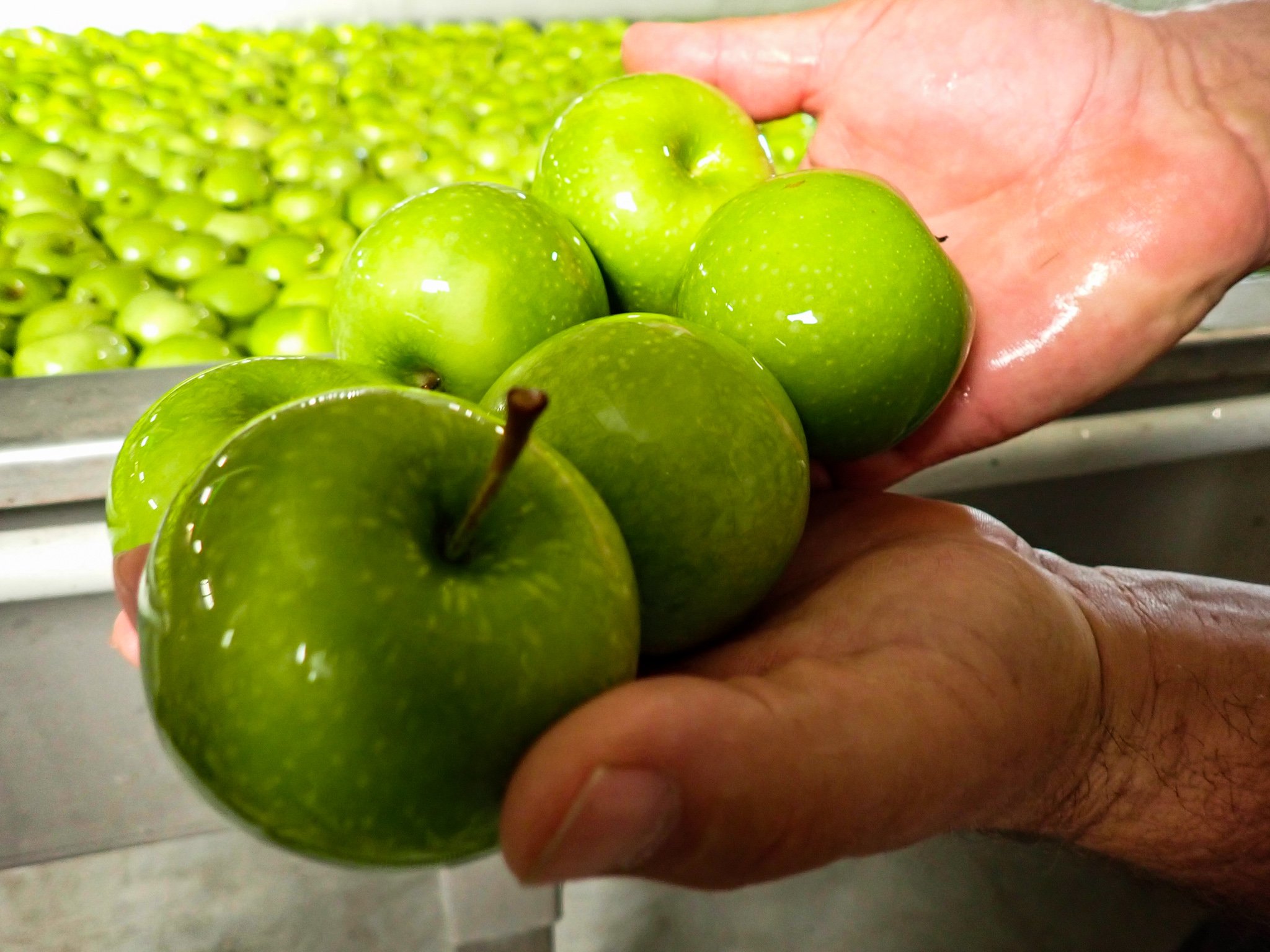 NB My apologies if you received a surprise recipe earlier this week. We’re in the middle of setting up my website Welsh Recipes page, and it came out of the oven too soon. If you fancy a wholesome snack, why not try chef and food writer Elaine Lemm’s recipe for Giant Welsh Oggie? It’s scrumptious!