There was no denying it. Our two Australian Shepherds, Aby and Max, were not at their best. They were whiffy. Despite rigorous weekly grooming sessions, activities Max considers pointless, those daily wallows in muddy waterholes had taken their toll. 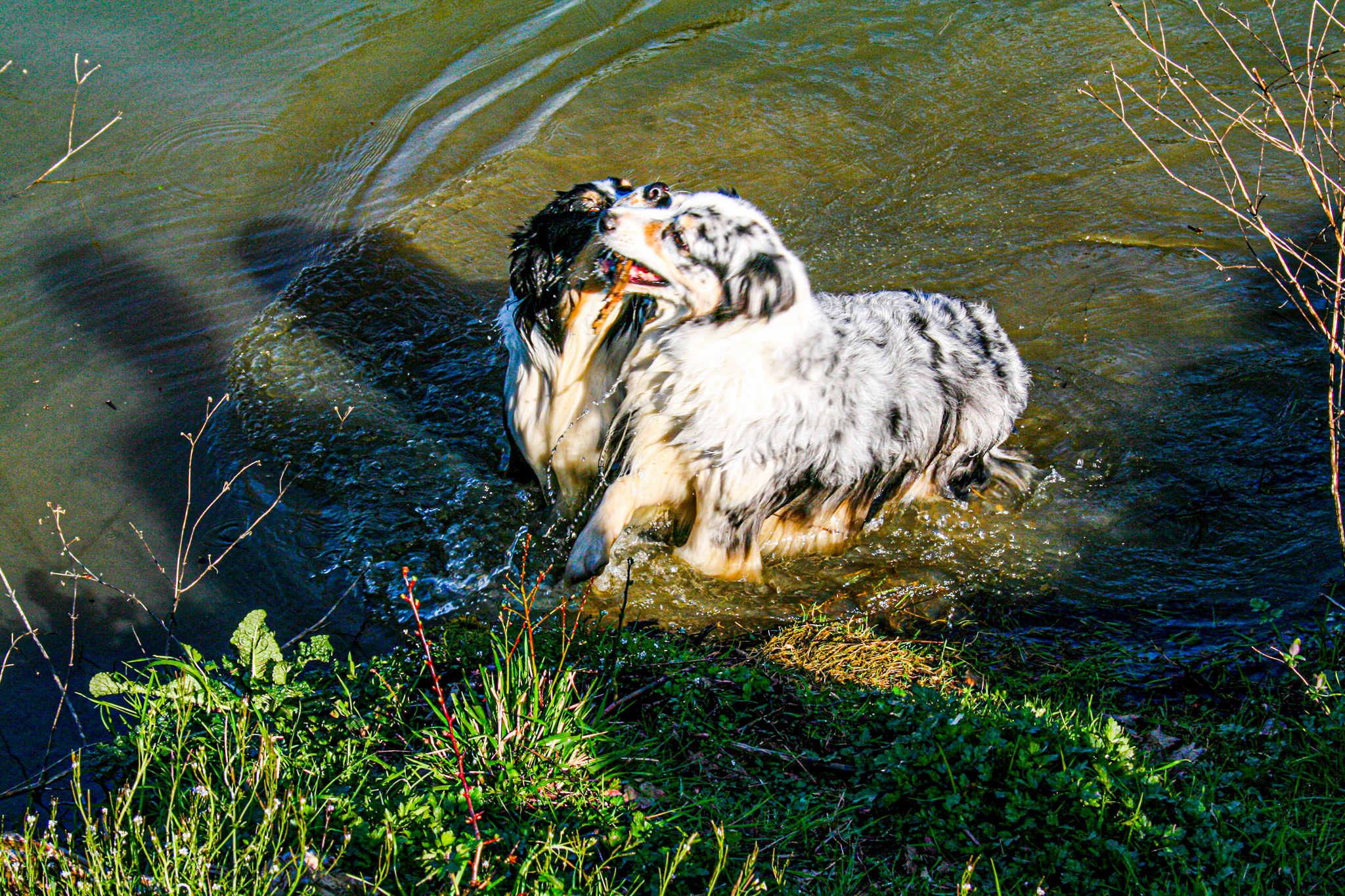 My usual remedy is to give them a bath on the lawn. Unfortunately, being winter, even I had to concede that it was too cold. So, I had this brilliant idea. It would be a New Year’s gift to anyone who came within two paces of our mutts. They would go to a professional dog groomer – if there were such a place in our area. 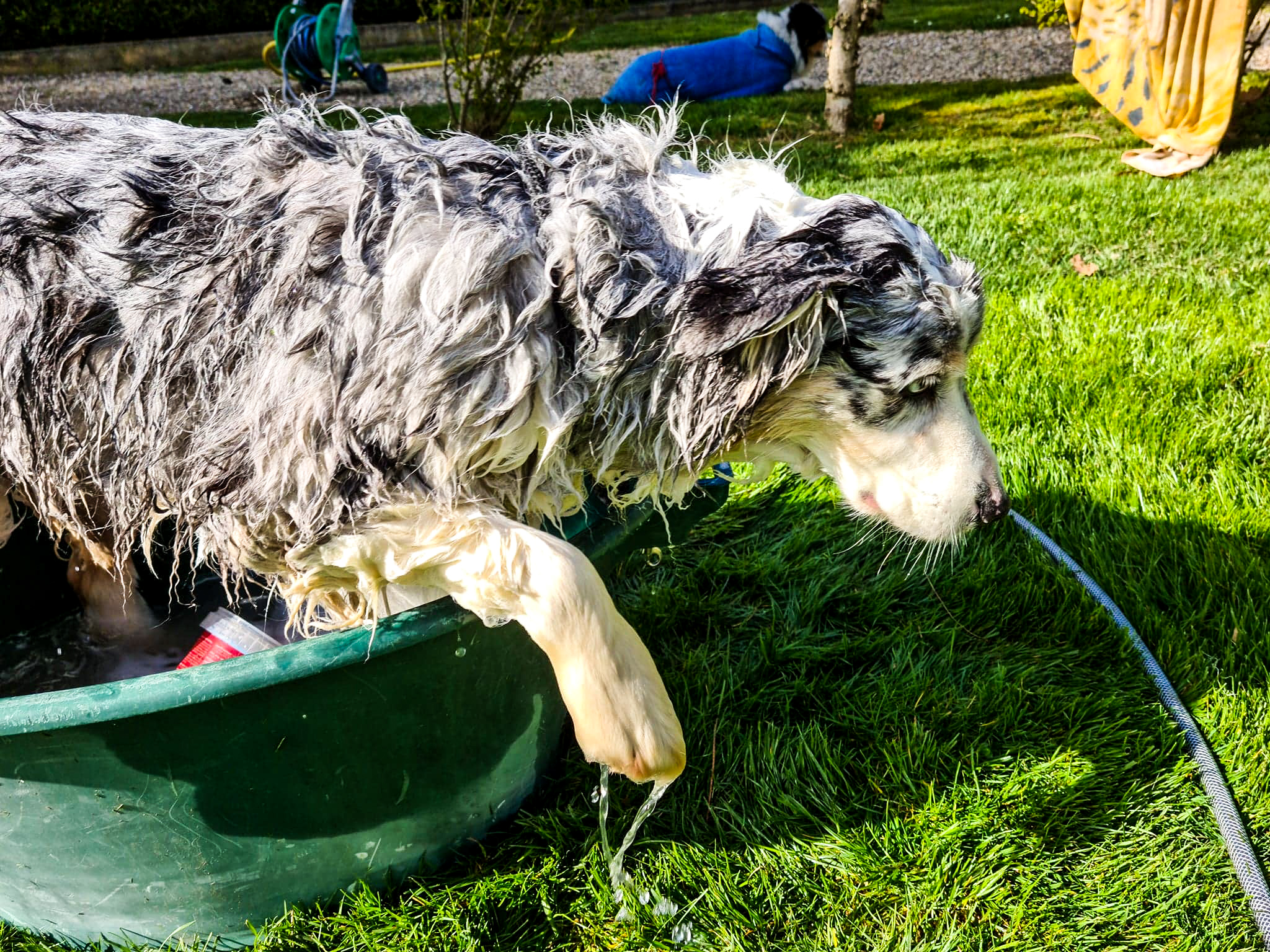 As luck would have it, our vet recommended a canine salon close to home. I called and spoke to an abrupt-sounding French lady called something like Mary-Joseph. It was tricky to be sure; her accent was so strong. She sucked her teeth at my description of the dogs.

“I can only manage twenty-two kilos and under.”

“Ah, they are both a little heavier. If I run them around the field a couple of times before coming, they might be a bit lighter.”

“It’s because of my illness, you see.”

Nobody likes a health alert. I paused, wondering what to say next. A thought struck me.

“Would you be prepared to have a look at them? I could help if you think they might be a bit heavy.”

The deal was struck.

On appointment day, the dogs leapt into the car, thinking they were due for another epic walk. Not so. Our fifteen-minute journey ended as we drew up to the lady’s house. The wolf pack howls fizzled out as the dogs, curious, peered at their surroundings. No woods, no river, no countryside. What was going on?

“I am sorry, please excuse me.”

It was another small world moment. For some reason, I always feel a guilt pang when this happens.

“The very same!” she said, momentarily lowering her mask so I could see her warm smile.

It was true. We had been introduced a long time ago.

“I’m so sorry. I didn’t recognise you behind the mask. Are you ready for the dogs?”

“Of course, bring them in.”

It wasn’t a promising start to our fledgling friendship. Why? Because Aby and Max, bursting to be included in the chat, exploded out of the car and nearly knocked Marie-José over. Oblivious to the instant chaos they were causing, Aby then threw herself on the ground directly in front of her.

We bustled into the nicely kitted-out doggy salon where Marie-José confirmed that if I could help with lifting, both dogs would pass the ‘not too big’ test. This suited me as being horrifically protective; I wanted to make sure their very first visit to a groomer didn’t end in trauma. 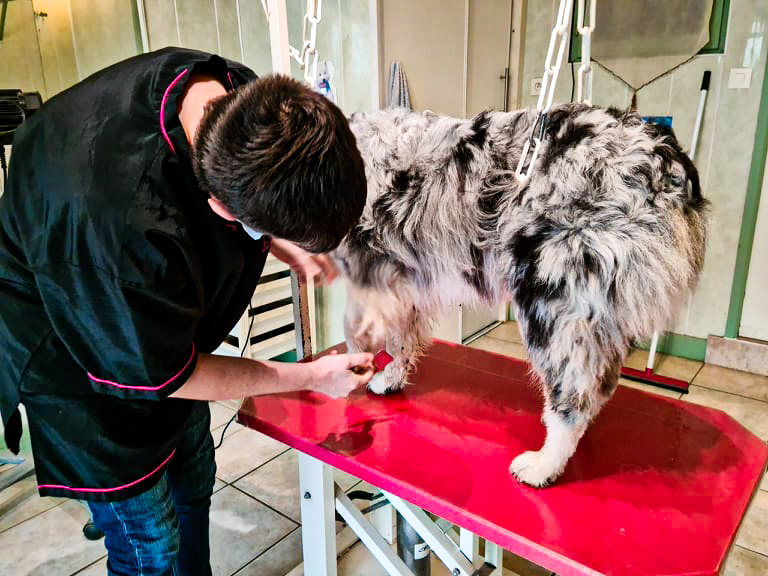 Since Aby was looking uber-keen, we hoisted her onto the grooming table. I wasn’t altogether sure about the plastic chains that were wrapped around her neck and tummy, but after a couple of wriggles, she settled down.

For someone with complicated underlying health issues, Marie-José worked with remarkable energy. ‘Oh, la las!’ rang around the room as great balls of fur were removed. For her part, Aby took on a saintly look, succumbing to the shredding with graceful enthusiasm.

Marie-José, looking a little red-faced, considered the job so far.

“Now we are ready to douche.”

Phase two commenced. None of the rub-a-dub dubbing the dogs were used to from me. As Marie-José expertly shampooed and massaged, Aby went all gooey-eyed. I could see what was she was thinking.

“Mum, this is fun. Do you love the scent of my shampoo?” 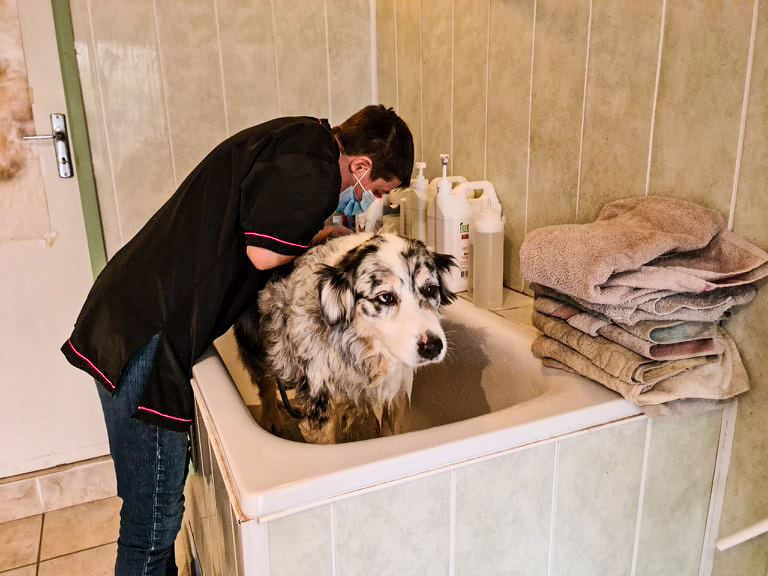 With the final rinse, I was given another telling look from our pretty lass.

“You need to learn how to do this massage thing, Mum. Can we come here more often?”

Back on the grooming table, a blow dryer was fired up. Max immediately tried to kill it and was banished to a corner. Not so Aby. She beamed, proudly watching herself in the mirror, admiring the flowing fur.

With our girl now looking like an inflated snowball, Marie-José extinguished her blow dryer and started a new grooming session. Snips, clips, brushes and combs, she slaved away. For her part, Aby was thoroughly approving. 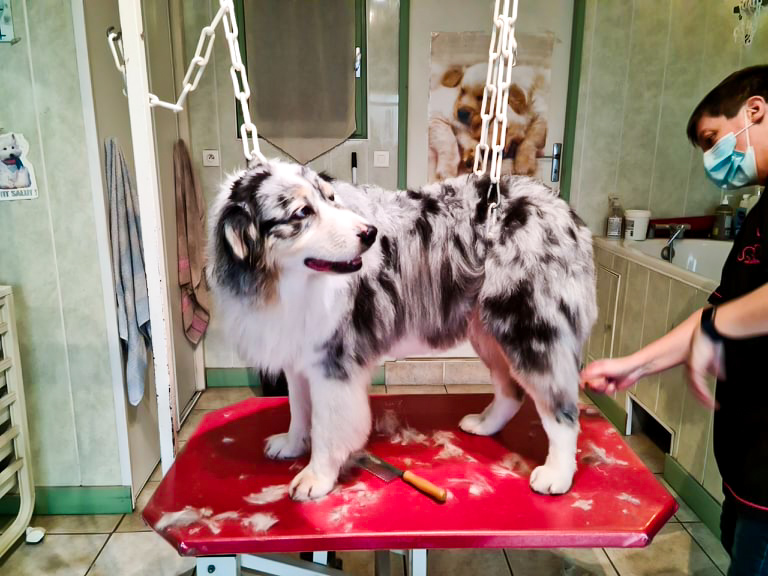 Finally, Marie-José stopped and scrutinised the job. With a satisfied nod, she applied her finishing touch – a liberal spray of canine perfume. It evidently thrilled Aby.

“Ooh, Mum, isn’t this lovely. Can we have some of this perfume at home, please?” 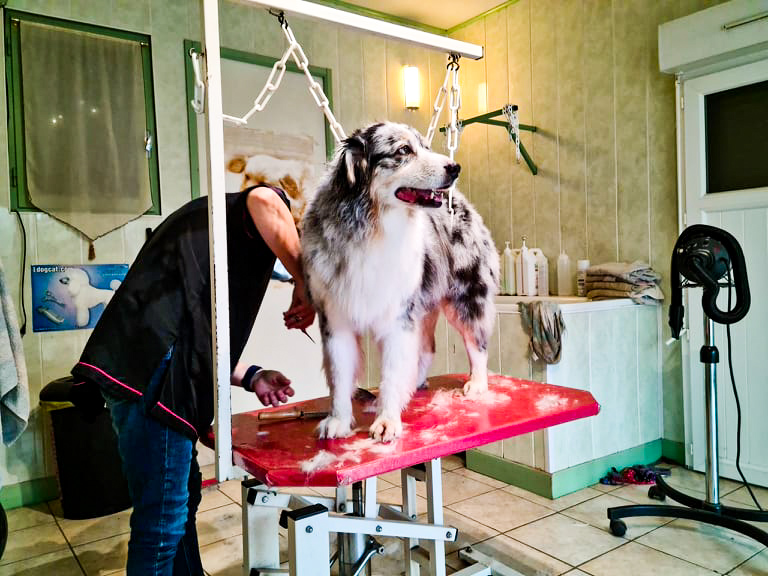 After an hour and a half’s non-stop slog, I really thought Marie-José needed a short break. I quite fancied one, and all I’d been doing was watching. My suggestion fell on deaf ears. She comes from tough French farming stock, where nobody stops until the job is done. It was Max’s turn. But where was he?

I heard a shuffle behind me. Sensing impending peril of the hygienic kind, Max had slunk off to the door. He gave me a toothy grin and glanced hopefully at the door handle.

Marie-José followed the same procedure, but things turned out a little differently. Of course, they did. It was Max. When he was attached to the plastic chains, for some incomprehensible reason, he started to sag. This inevitably caused an unfortunate reaction.

“Um, yes. I don’t know the correct French word. Anyway, it looks as though he’s being strangled. I think we might need to loosen the chains a little.”

Marie-José gave one of those uniquely French ‘Huh, okay’ shoulder shrugs and adjusted the settings. The rest of the initial brushing session was conducted with Max in a miserable semi-crouched position. 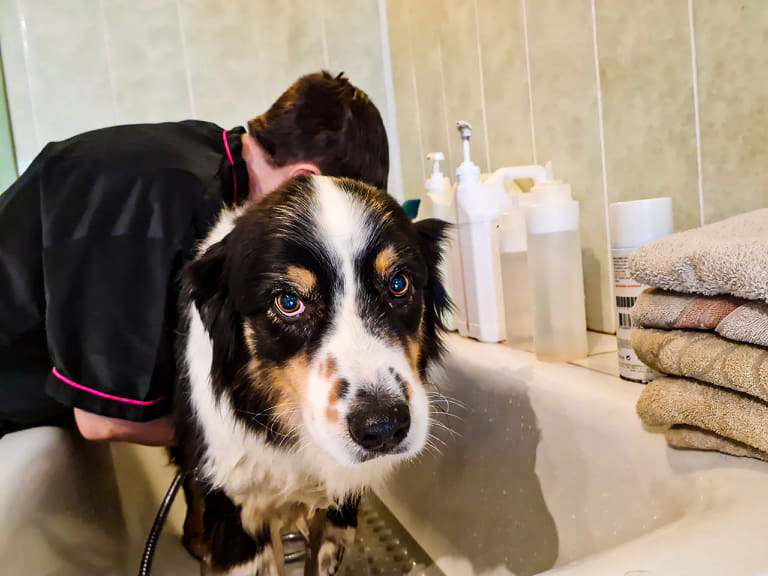 Next, it was the bath. Max stood like a condemned hound. It was easy to see what was going through his mind.

“Mum, I’m obviously going to drown here. Aaand, my ears are filling with water. I’ll probably be deaf for life if I live through this torture. Not that you care!”

Meanwhile, unsympathetic of her brother’s plight, Aby was admiring herself in the mirror. I swear she was humming that Westside Story hit: ‘I feel pretty, oh so pretty…’.

Back at the bath, and it was massage time. My hopes that this would cheer Max up were dashed. He peered mournfully through a sea of bubbles and swung his head from side to side. One gusty shake later meant that Marie-José and I were now wetter than the sulker. We mopped ourselves, wrapped him in towels and plonked him back on the grooming table. 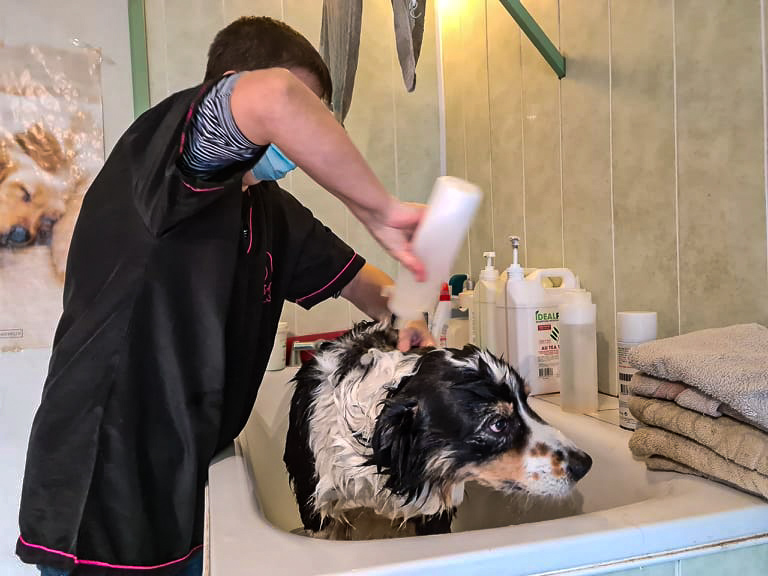 Of all the ordeals, I knew this one would be the worst. Max’s gawped at me when Marie-José switched on the dryer.

“Muuuum, it’s the hot breath monster again. It’s going to attack me! Stand back. I’ve got this covered.”

Max lunged at the hot air stream. It was such a bad idea.

With an ungainly skid, he fell off the table and ended up swinging like a suspended hammock. Thank goodness for plastic chains. Aby appeared by my side, gave her brother a ‘you are such a wuss’ look, and wandered back to position A. The mirror.

I hung onto Max, counselling him on the benefits of having dry fur while Marie-José battled on. She reached his back end and made a suggestion.

“I think we should clip this area,” she said, pointing to the business zone. “It will be easier for him to keep clean.” 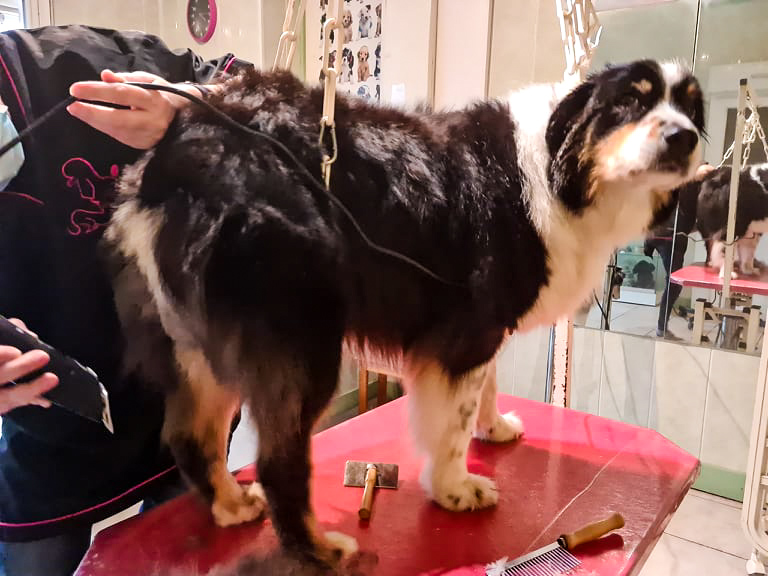 Conversely, Max clearly thought it was the worst idea of the afternoon so far. He peered owlishly as she got to work.

“Mum, you do realise this lady is pervy, don’t you?”

The job was done. Max was clean as a whistle, his coat was shiny, and he looked like the world’s most dejected show dog. The final squirt of dog cologne almost did him in. This time he stared accusingly at me.

“Gaaah! I stink. Mum, see that? She’s just sprayed girlie stuff on me. I stiiink!”

Marie-José and I admired her work. Aby, looking gorgeous, was still preening herself, while shiny Max was positioned at the exit. It was almost 5.30 pm, and Marie-José had started at 2.00 pm. The salon was covered in tumbleweeds of Australian Shepherd fur, and the wall next to the bath, courtesy of Max, was still dripping wet. She must have been exhausted. 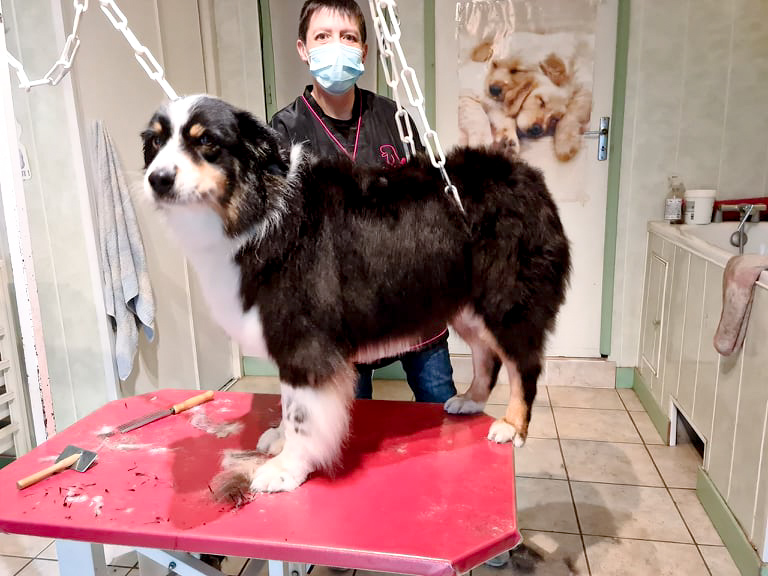 “They look amazing, Marie-José. Thank you so much. I hope they didn’t tire you out too much.”

“No problem, I am used to working with dogs, although Max. He perhaps needs more courage with the dryer. I will go and rest now.”

To my embarrassment, Marie-José charged a pittance for her work. Try as I might pay a little extra, she steadfastly refused.

“I know you. I will not accept any more money. Bring them back in the spring if you want, and I will work on them again. Perhaps next time, Max will be braver.”

As our pampered pooches leapt into the car, three things occurred to me. I could guarantee that Max would not be any braver. And that today was yet another example of how kind the folks are in our community. Honest, straightforward, and generous in so many ways.  Oh, and the third? There was no doubt in my mind that Max would be heading for the nearest muddy puddle the second we got home!