Love mushrooms? The folks in our southwest corner of France do, and it’s high season.

Our forest has a dubious reputation for producing the best fungi in the area. I say dubious because a sizable chunk of our land is enclosed, so at this time of year, we have visitors who turn up any time from 6.45 am asking permission to enter. It drives our dogs and my husband, Jack, mad.

The Boletus eduli, known here as a cep (or porcini), is currently firing everyone’s fancy. The rich meaty-flavoured mushroom is large, round and starts a pale yellowish-brown colour, turning darker as it matures. They can become whoppers, growing to a width of 30cm (12 inches). 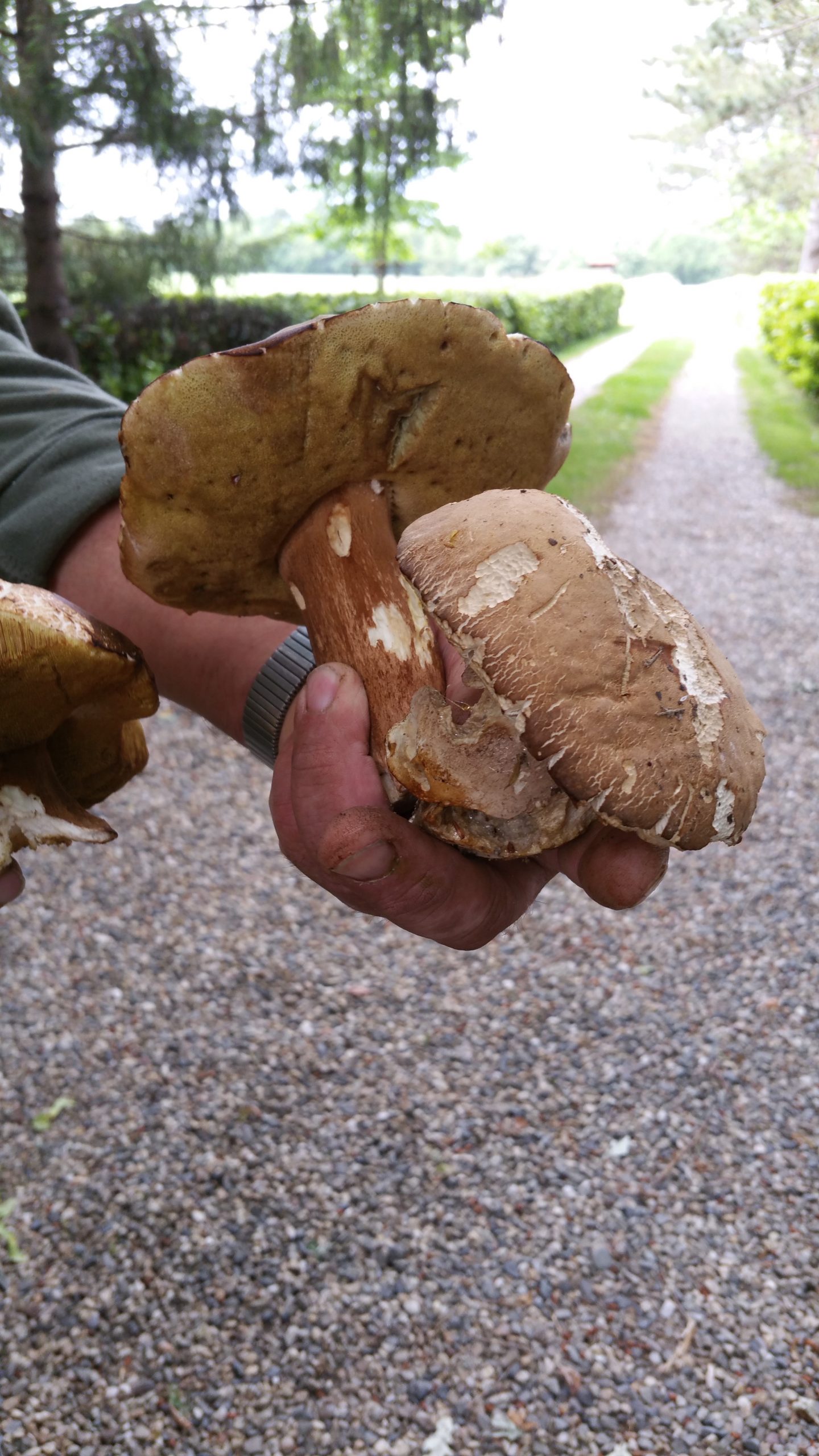 The other favourite flourishing in our forest is the Cantharellus cibarius – girolle. Also known as chanterelles, the trumpet-shaped golden beauties started appearing in July and are still common.

As we all know, picking the wrong type of mushroom can be fatal, but France has that covered. Many pharmacies have specialist fungi ID experts who cater for less knowledgeable enthusiasts. Ours often has customers with muddy boots and a bagful of mushrooms waiting in line. They may look a tad incongruous, but the pharmacy does provide a top service. 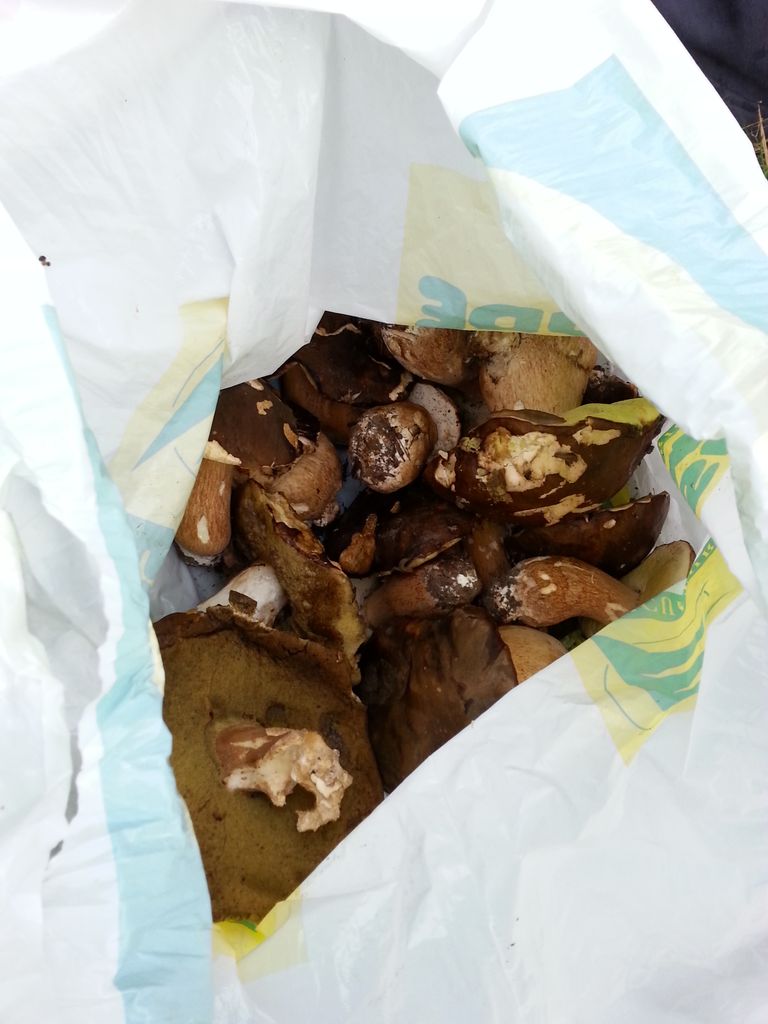 To improve our champignon know-how, I persuaded Jack to join some French friends on a foraging hunt. Yves and Georges, dead keen, immediately strode off, abandoning Nicolé to look after us novices. While we strolled along, nattering, enjoying the walk, Yves and Georges were meticulous. They picked through dead leaves, delicately removing and stowing their gems. It was during this forensic examination that Gilbert, Yves’ brother-in-law, popped up. Noting the moon’s favourable position (he’s a lunar gardening keenie), he was already there, poking leafy debris.

The following two hours were an education. Each picker had a bespoke mushroom-collecting wicker basket, a special mushroom-cutting knife and a staff. Each foraged independently on different patches. No one approached the other’s territory; it’s an unspoken rule among mushroom pickers. 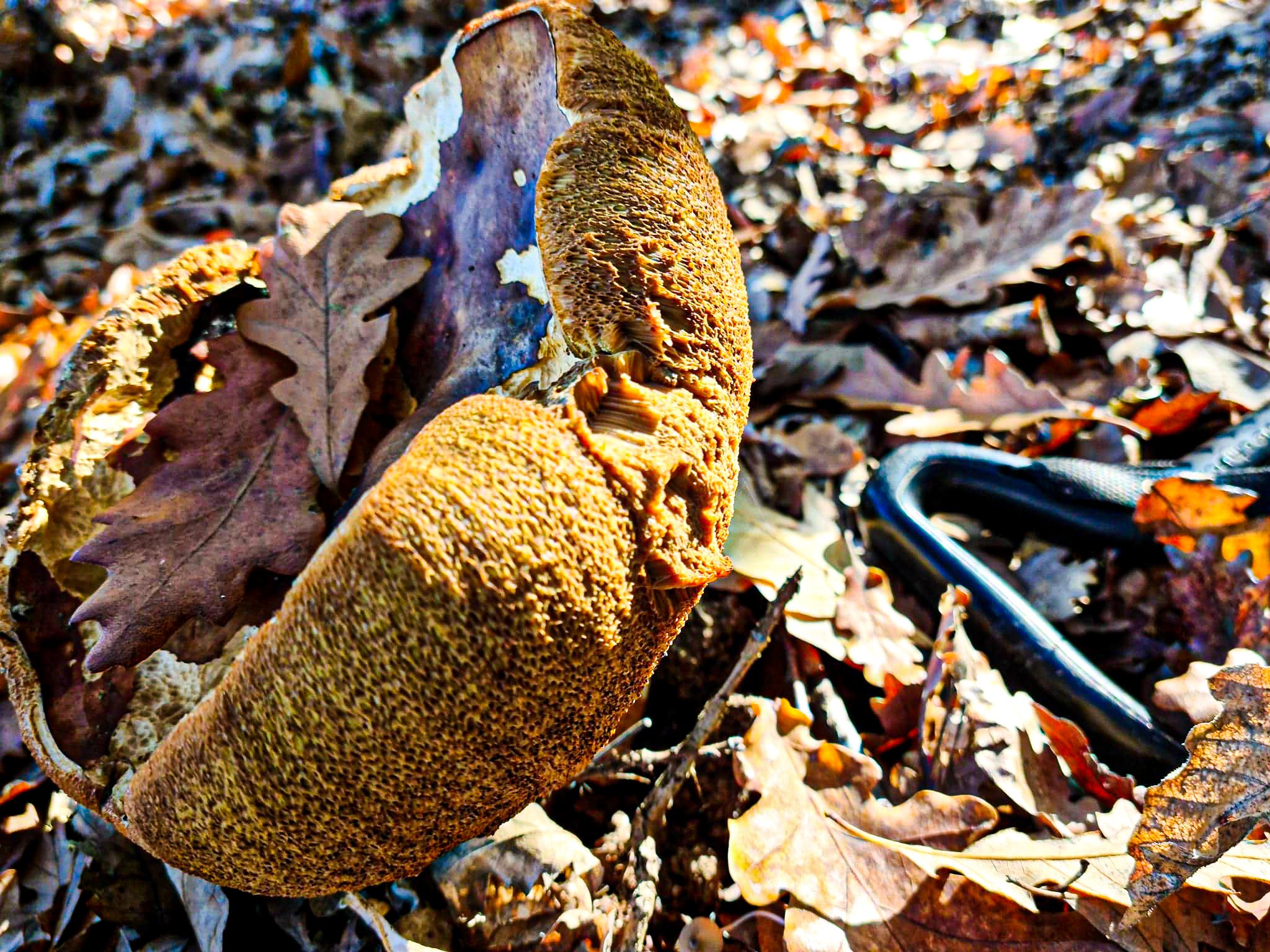 As beginners, it was decided that Jack and I needed to have our finds checked to make sure they were edible. Yves was appointed as the official inspector. He scrutinised each offering, segregating them into three categories: Toxic – discard immediately and do not suck your fingers. Edible but boring; and, ‘Oh la, très intéressant’. 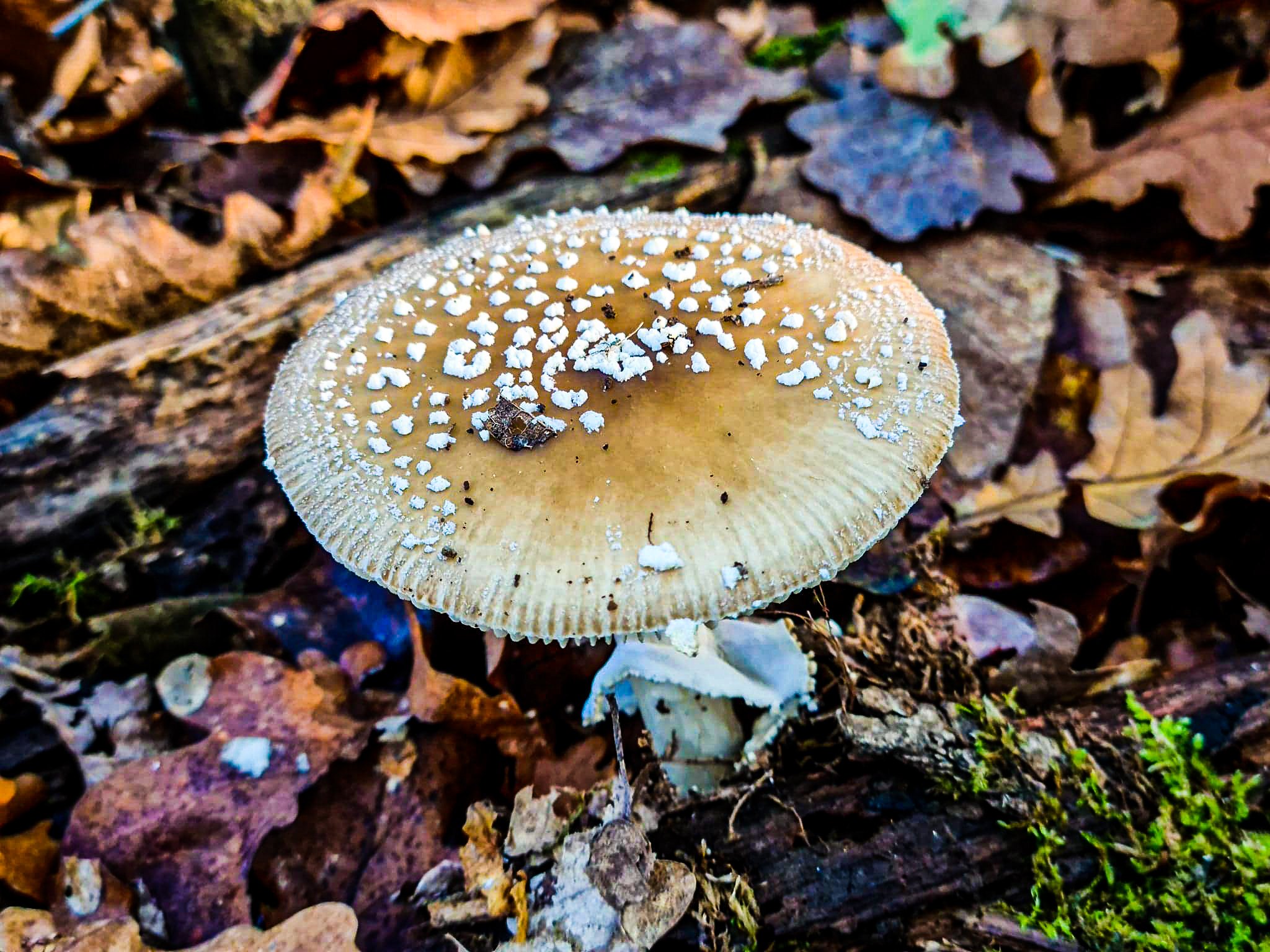 By the end of our stint, every pannier was filled, the prized cep being the most prevalent. Flushed with success, we celebrated our first champignon-picking foray with drinks back at the house. This was when we met Nicolé’s sister.

Gilbert had tramped across the fields from his farm to the mushroom zone. He was too tired to walk back and called his wife, Emily, to come and pick him up. She joined us, and we gathered around the kitchen table so the men could show off their goodies. 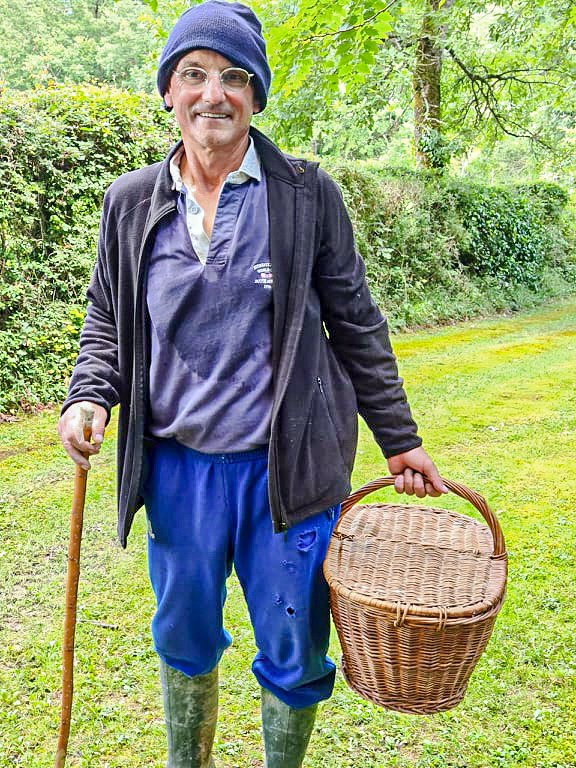 We, ‘Oh, la la’d’ at the spoils, which included cèpes, girolles and trompette de la morts (trumpet of the dead) – the latter of which were inky black and looked extremely deadly. Again, I was mistaken. The black beauties are apparently delicacies. I wasn’t convinced.

Typical of the generous folk here, our friends insisted on sharing their harvest with us. It was a kind but misplaced gesture for two reasons. We didn’t want to deny them their hard-earned bounty. Besides, I didn’t know how to cook the more exotic mushroom varieties. I should have guessed what would happen next.

An energetic debate erupted among the family groups over the best techniques and recipes to suggest. Emily, who is a sturdy, unflappable sort and structurally the opposite of her ultra-slim sister, was determined that the only way a cep should be eaten was in an omelette. I wouldn’t have dreamt of arguing.

Yves was having none of it. Dismayed at the idea of contaminating the natural flavour of the magical cep with any other substance, he insisted that they must be eaten on their own or at a push cooked in a blob of butter with a sprig of parsley. 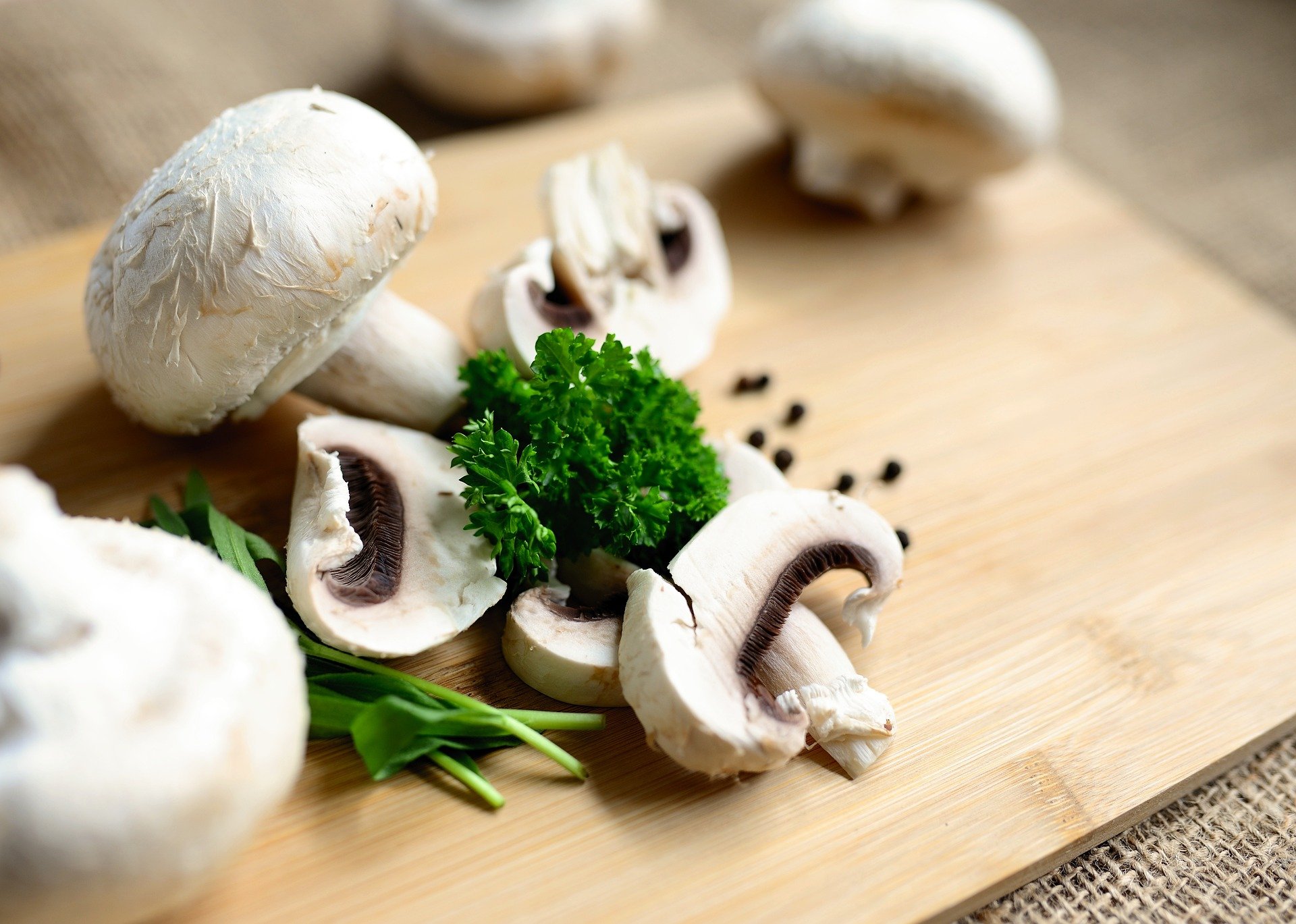 Meanwhile, Jack was beginning to reach mushroom-information-overload. Sensing an opportunity to escape, he glanced at near-empty glasses and headed to the wine cellar for liquid reinforcements. Serving it should have been simple. But we are in France.

If there’s anything guaranteed to capture a Frenchman’s interest (aside from a mushroom), it’s the sight of a nice bottle of wine. Yves was mid-way through a lecture on the values of dried versus frozen girolles when Jack reappeared with three bottles of red. He asked which they would like.

Yves interrupted himself with a satisfied sigh. There was a moment of hushed silence as each bottle was reverently passed from one family member to the other – the labels studied in minute detail. The Listrac-Médoc won. New glasses were filled, contents sniffed, swirled and elegantly sipped. We returned to the subject of mushrooms. 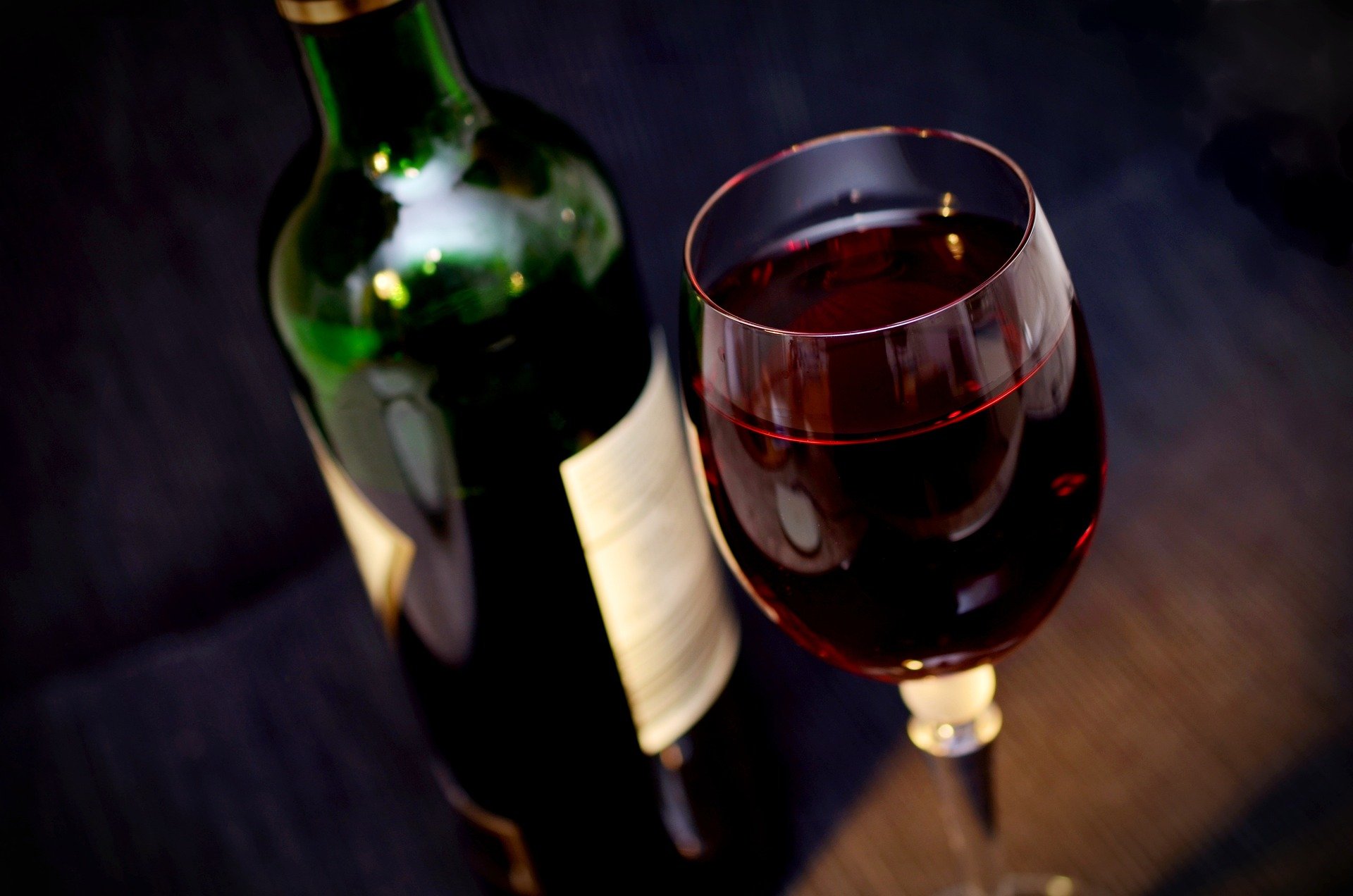 Some of the grub-infested specimens looked pretty grotty to my untrained eye. I asked if they would be discarded. Bin a maggot-ridden cep? My innocent question was met by appalled expressions from everyone aside from Jack, who thought it was a jolly good idea. What followed was a lively discussion about the best cleaning methods.

Nicolé wanted to ensure I understood and asked permission to demonstrate the process. Of course, I agreed. Moments later, she had taken command of the cooker and transformed into a master chef, barking out instructions to everyone who did exactly as she commanded. As she collected samples from each pannier, I produced olive oil (had to be extra virgin), butter (half-salt), garlic (pink), several eggs (brown, medium-sized), parsley and various pots and pans. 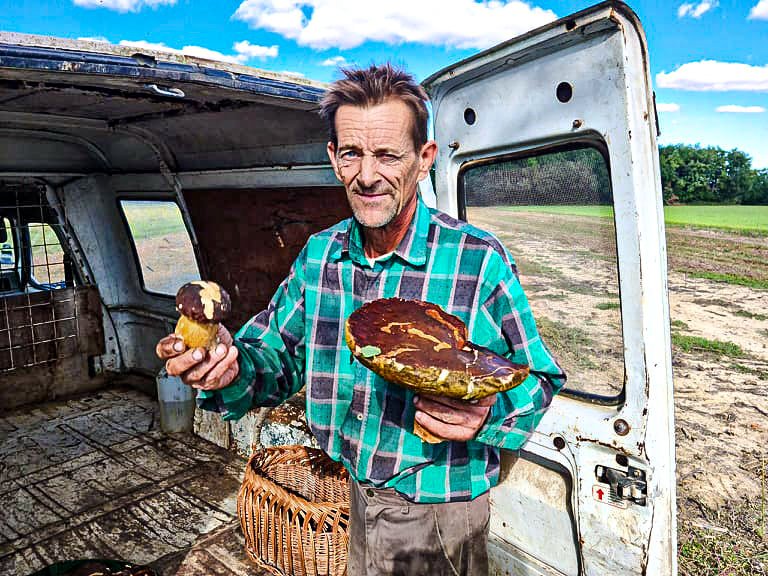 We watched as skinny Nicolé treated us to a masterclass on preparing cèpes and trompette de la morts. Three ways. Others helped out at different stages, but she was the boss. As the culinary scene played out, there was very little arguing. Perhaps it was because she expertly produced platefuls of mushrooms that were either plain, with added garlic and butter, parsley or as part of an omelette. And a soupçon of seasoning. That, together with fresh hunks of baguette, meant everyone’s taste was catered for.

The evening ended around 11 pm. Our simple impromptu glass of wine had evolved into a gourmet classic. Ignoring the late hour and our protestations, they insisted on washing all the dishes and tidying up the kitchen. 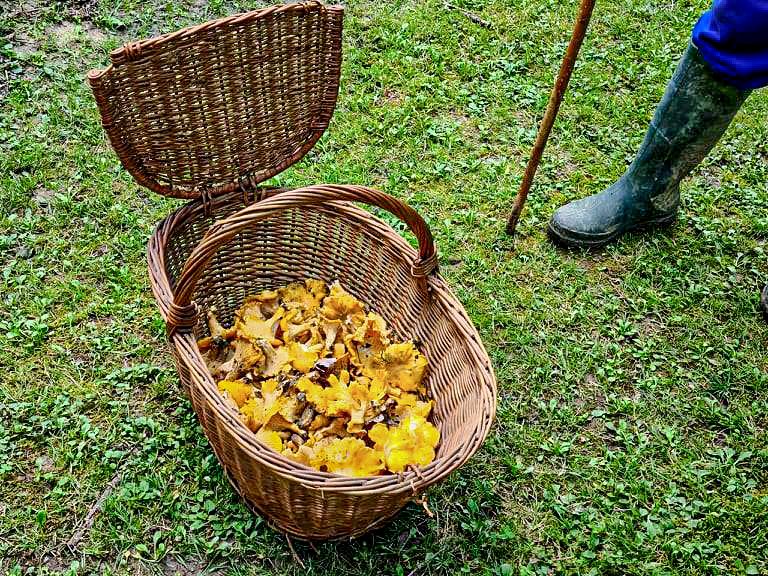 Finally, the men gathered up their precious harvests, and our friends returned to their cars, each filled with gratitude and invitations to their homes for dinner. We waved them off, touched by their sincere kindness. It was another unforgettable experience, another example of life as we know it here in France.