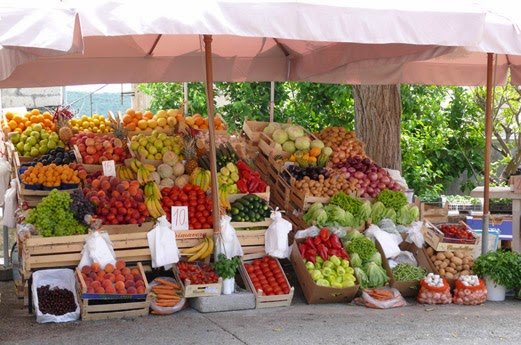 As most people who live here will tell you, the French are devoted fans of the weekly market. The smaller ones are usually set up in the centre of the town, whilst the bigger versions may also take over streets and alleys, surrounding fountains and other civil adornments. Whatever the size, the designated areas are cordoned off from traffic, enabling the workers to set up shop. Stands, stalls and mini tents are erected in double-quick time, as the market traders prepare to offer endless selections of interesting (and sometimes dire), goodies to the discerning consumer. The sights, sounds and smells are heaven, and I absolutely love them.
Our local market is small and, although it’s attended by a wide range of people, the majority of shoppers tend to be quite elderly. It takes place every Monday morning and fills the tiny town centre plus one street. The number of traders ebbs and flows according to the seasons and the weather, but there are always those stalwarts who brave it, come what may. These are the people that our sturdy regulars do business with regardless, and why? Because here is a place where one finds produce so fresh that it is likely to have been plucked out of the ground earlier that morning. It’s a place where prices are fair, and bargaining is rife. It’s also a place where the weekly gossip is exchanged, where new babies are slapped on the head, and where much debate can occur over a particular recipe or jar of recently purchased pickles. It is an intrinsic part of our lives. As is our indispensable team member, the market basket (panier), an essential receptacle for those hard fought-over bargains. 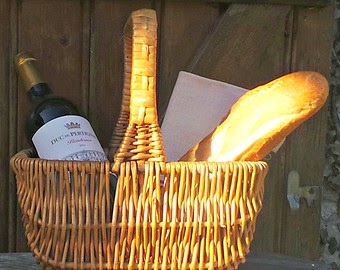 As one might expect in a deeply rural spot like ours, we all wander around with our woven hazel or willow market baskets, gently filling them with mud-caked veg, and other produce. It’s an accepted form of luggage for the weekly groceries and, in many ways, eminently practical. The basket can be dumped on the floor when an aching back needs to be eased. It can be placed onto a market stall to enable the trader to fill it with goods. The mud from extra-fresh produce drops through the holes in the sides, and an accidental glancing blow from a fellow passing shopper amounts to nothing more than a gentle nudge. It’s a bit like the dodgems. In spite of the fact that they can become rather weighty, we have all coped perfectly happily with the state of affairs, or at least we did, until the advent of the market shopping trolley.

The market shopping trolley as we all know is a bag on wheels supported by a metal frame. Practical though it may be, it is viewed with deep suspicion by the locals. Many are seriously concerned that this new-fangled, and often garishly-decorated, shopping aid is going to become an unwelcome feature of our otherwise traditional market place. This means that most of us still stubbornly slog around with our paniers, steadfastly ignoring the occasional trolley users as they skip youthfully up and down the street with their wheeled ‘paniers of fire’.  It was during one such demonstration of gay abandon that our orderly market was transformed into a place of chaos and general devastation.
We’re all a bit frightened of Madame Canorgue. Well at least I am. At full height she’s probably just about touching 5ft, but she’s often weighed down by her abnormally heavy basketful of goods so it’s difficult to be accurate. I’m not sure how old she is, I’d probably do her a dreadful injustice if I guessed. However it’s safe to say that she’s likely to have lived through several major wars. Her face is often partially obscured by her black woollen scarf, but the expression is there for all to see. It is one of grim determination towards the task in hand. On Monday mornings her total focus is, as usual, on the vegetable stall. Madame Canorgue likes to charge to the head of the queue, and woe betide anyone getting in her way. In her endeavours to achieve this she’ll scan the assembled company with hawk-like, dark brown, beady eyes challenging anyone who might be brave enough to step in front of her. Nobody does. This is not a lady to be messed with.
So there we were, a typical market day, going about our own business, and learning about that of others. We had the odd interloper with wheels, but determinedly ignored the ease with which they tripped along, their trolleys gliding seamlessly over humps and bumps rendering the prospect of making further acquisitions an act of simplicity itself. Instead we carried on lugging our baskets that were becoming heavier with every purchase. Then it all kicked off.
Madame Canorgue, as usual, had stamped to the head of the queue at the vegetable stall. She plonked her basket on top of a hapless mound of carrots and started making her order. This sounded to me rather like fire from a machine gun, but the trader followed her instructions with typical good humour. There’s no doubt that this lady loves her vegetables, especially asparagus. After much prodding, poking, and close scrutiny of the legumes that caught her eye, her selection was finally made and packed into the basket until there wasn’t a single inch to spare. I watched on in amazement wondering how on earth she was going to lift the thing off the table. I needn’t have worried. MadameCanorgue is a farmer’s wife and I could quite clearly see her little biceps bulging gamely through her housecoat as she hoisted the basket and turned to march towards the bread stall. 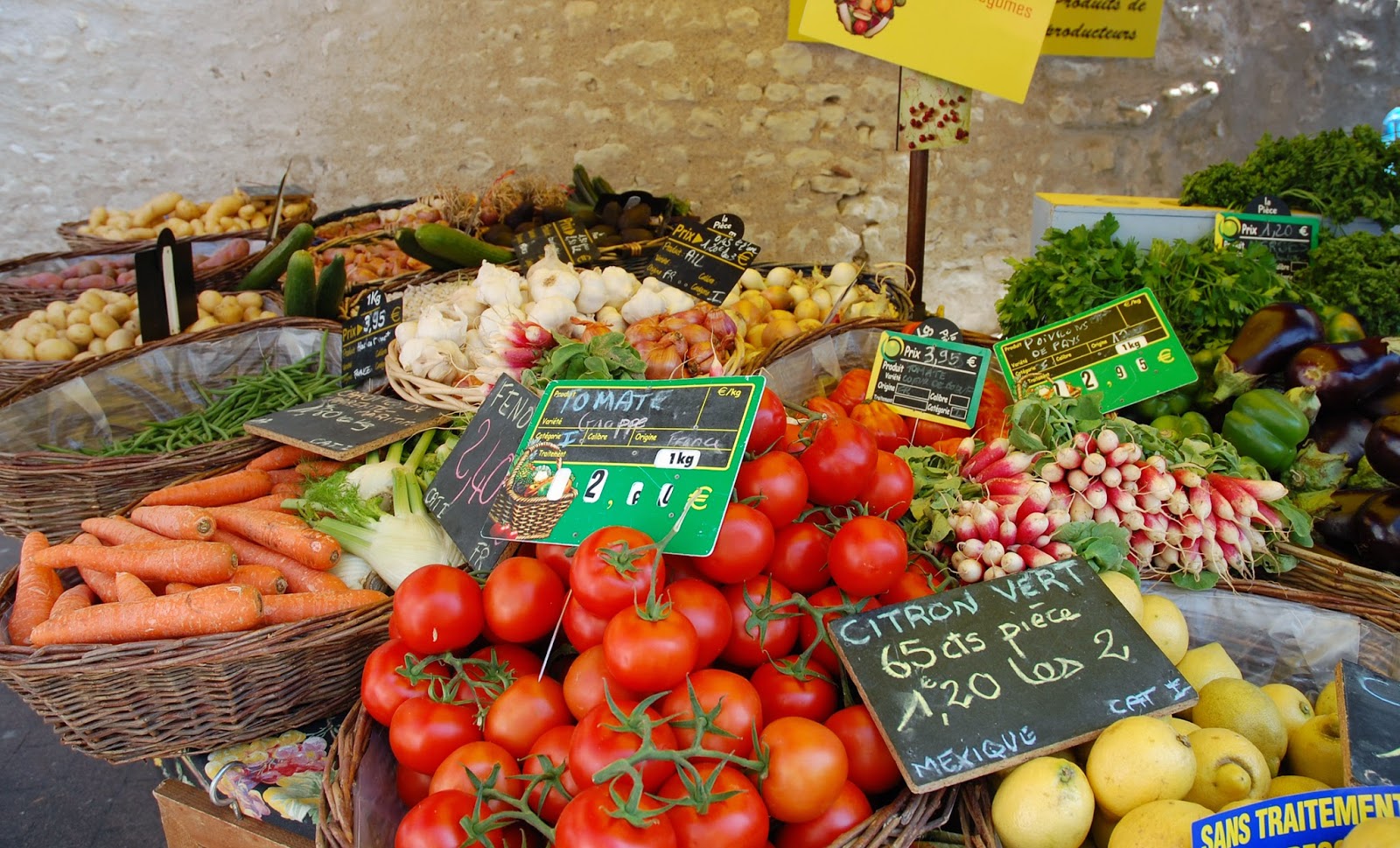 During the vegetable examination process her scarf had slipped forward a little, and was now acting like a pair of flexible blinkers. Unfortunately this newly-developed tunnel vision meant she had no awareness of any activity to either side of her. A trolley was approaching stealthily, and at speed. Oblivious of the danger, she took a step sideways and walked directly into its path. Her foot then somehow struck the inside of one of the wheels thus causing her to lose balance. Our queue of vegetable buyers looked on in horror as, in her efforts to avoid an unladylike backward flip, she threw her hands forward, and with them, the basket laden with legumes. Vegetable shot everywhere, it was mayhem.
Desperately hanging on to her asparagus tips she shrieked at her goods, many of which were variously flying through the air. Help was definitely required. The more able-bodied of us rushed to her aid and gave chase to the rapidly-disappearing miscreant vegetables. I could see that the cabbage had become lodged in the leg of the vin man’s stall, so knew that it could be retrieved fairly easily. I left that for the moment. Simultaneously I saw an airborne bunch of parsley ricochet off Monsieur Dupond’s shoulder. It fleetingly reminded me of a bride’s bouquet being gaily thrown towards competing singletons. However, in this case it was Monsieur Dupond who caught it. Whilst extremely pleasant, he is a rather unique personality who normally only converses with himself, and whose independent eyes can often be a distraction. I was astonished at how well he made the catch.
But then I saw the apples. They were a different matter altogether. There must have been eight or ten of the blighters cheerily bowling down the street, gaining momentum as they glanced off the cobbles and cracks in the road. Happily most of these were retrieved by Monsieur Choi, the roast chicken man who parks his mobile oven at the bottom of the slope. But, sadly, some were lost forever. The potatoes posed similar problems, but my fellow fielders deftly gathered many of the offenders leaving just a couple to escape down the drain. During the general pursuit I felt a passing moment of utter relief when I realised that there were no loose sprouts involved, and that madame hadn’t made it to the grapes stall.
With much of the now battered and bruised produce finally corralled, we collectively returned it to madame. Although speechless with rage, she had fully recovered her equilibrium. She now wore an expression that spelt revenge. In a moment of suspense that would have made even the most die-hard horror movie fans quake in their boots, we watched to see how she would deal with her assailant. Murder was in those eyes as she turned, a little stiffly now, towards the offending trolley. Would she bring back the guillotine? I wondered.  But, fortunately, the opportunity for retribution had disappeared… Light as a feather, with not a care in the world, sporty trolley lady was already disappearing into the distance. She was apparently unaware of the chaos that had been caused by one of her wheels. All we could see now was her departing form as it rounded the street corner with trolley trundling effortlessly alongside. 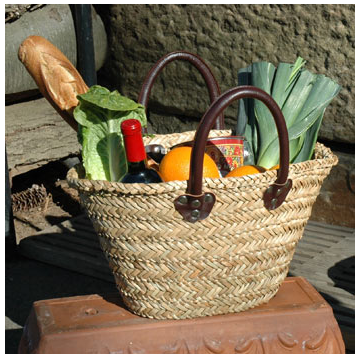 Following the trolley incident it seems that the darkening veil of uncertainty is now descending over our rickety market-going community. In addition to the latest pickles or conserve recipe discussion, the new question that’s being debated (but never in front of Madame Canorgue), is the relative merits of this ultra-modern labour-saving device. Should we stubbornly persevere with our traditional basket-lugging, which finds us physically spent after a morning at the market? Or make the switch? There are those who will always consider the trolley to be a vulgar, dangerous piece of equipment, only acceptable if the user has a class one heavy goods vehicle licence. But there are others whose joints might altogether seize up if they don’t consider investing in wheels. They could well be forced to make the change. It’s a tough one to call, but one thing’s for sure – if I end up buying a trolley on wheels, I’ll keep well away from Madame Canorgue!