The Canal, the History and the Stinky Discovery

My sister, Di, had found a new favourite walk and she was dying to share it with me.
“D’you fancy going for a dog trek along the canal?”
“Absolutely, I’ll pick you and Sprite up later.”
Sprite, Di’s Jack Russell is best pals with our Aussies, Aby and Max. What he lacks in stature he certainly makes up for in personality, he’s a wonderful lad. Much to my sister’s disgust, it was my mutts who taught him the deafening pre-walk howl routine. He now embraces it every time he sets paw in a car. 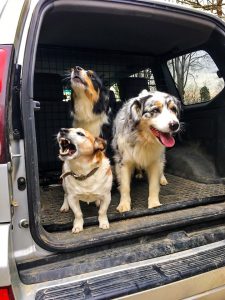 Off we went, dogs bursting with excitement, crossing Le Pont de Coudol. Built in 1850, it is an elegant bridge spanning the River Garonne. If you know North Wales, it looks like a mini version of the Menai suspension bridge.
Careful driving is required here as it is ultra-slim. Passing another vehicle coming from the opposite direction is apt to be precarious. It’s one of those moments when, mid-pass, one takes an involuntary sharp intake of breath. 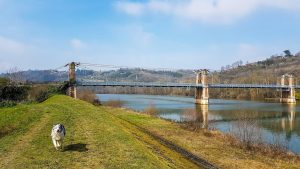 We made it unscathed and followed the road snaking alongside the Canal du Midi to our start point. The famed waterway is sandwiched here between asphalt and the River Garonne. The river, vast in comparison, flows lazily on the other side, on its way to meet the River Tarn where they converge at the ancient abbey town, Moissac. 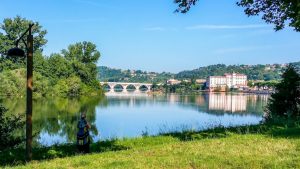 Moissac is another favourite haunt of ours. Not least because of its charming cobbled streets, the arty shops and to die for cafés. The abbey, a UNESCO World Heritage Site, has a splendid Romanesque door with a wow-factor all of its own. And the 11th-century cloister is famous for its 76 capitals with biblical carvings. It is a place worth visiting. 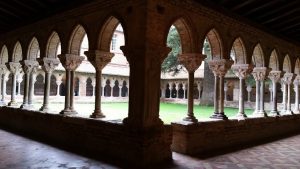 We parked next to a lock gate and set off along the towpath lined with majestic plane trees. Not just lookers, they were planted so their roots could reinforce the banks, and their foliage affords welcome shade from the hot summer sun. 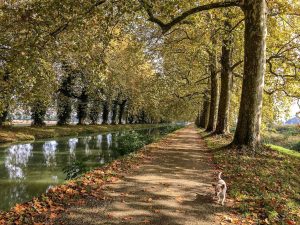 “I suppose you know what you’re walking on?” said Di, looking supremely self-satisfied.
“A path?”
“Ah hah! But this isn’t any old path. It’s been used by pilgrims for hundreds of years.”
“Really? Which ones?”
“This is a section of the catholic pilgrimage Route de Compostelle. It’s also known as the Camino Way. The destination is the legendary tomb of the apostle Saint James the Great. It’s in the cathedral of Santiago de Compostela in Galicia, north-western Spain. Tradition has it that the remains of the saint are buried there.”
“Wow, imagine that!”
“Yep, I knew you’d be impressed. There’s a network of routes in Europe leading to the shrine. For many people, they are considered a spiritual path or retreat for spiritual growth.”
I studied the path, which had assumed a new significance.
Dring dring!
I turned just in time to avoid being run down by an approaching cyclist. Max was keen to go for the ruby tackle, but I didn’t fancy his chances against those whirring spokes. I hung onto the dogs and stood back.
“Bonjour et merci!” cried the pink Lycra-clad fellow as he zoomed past.
“Blimey, that was a close one!” I gasped.
“I forgot to mention that. The towpath can be very popular with cyclists too.” 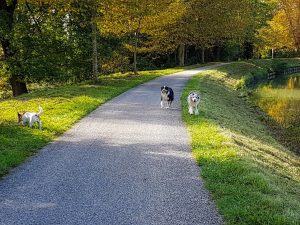 With not another soul in sight, we continued our amble along this tranquil stretch of water. Just in case you’re not familiar with it, the Canal du Midi is a major link in the inland waterway system from the Atlantic Ocean Bay of Biscay to the Mediterranean Sea.
It was built in the 17th century at a time when France was the centre of civil engineering excellence. The canal at 241 km (150 miles) long was Europe’s first long-distance canal. It connects Toulouse, using water from an artificial reservoir built in the Black Mountains, with the Mediterranean at Sète via the Thau Lagoon. 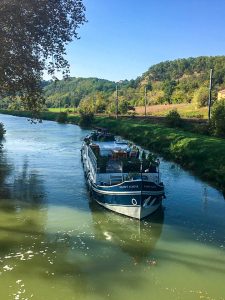 We watched beautiful barges putt-putting past on their way to Moissac.
“Now that’s a great idea for a holiday,” I said. “Just think how much fun the dogs would have lolloping on and off for a swim.”
“True. Well, it is the most popular canal in France for leisure boating. Not sure I’d fancy opening all those lock gates, though.”
“Good point. I wonder how many there are?”
“I’m so glad you asked!”
“You’re looking smug again.”
With a grin, Di produced a well-thumbed handbook.
“Ooh, you sneak, you’ve got a guidebook! No wonder you know so much. Go on, then, tell me.”
“Hang on. Ah, yes, it has 91 working locks, although there used to be more. Oh, and it’s another UNESCO World Heritage Site.” 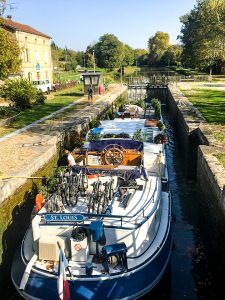 “Huh, we’re bristling with them here. I don’t know much about it, but I’m pretty sure there’s a canal tunnel somewhere. See if that’s mentioned.”
“One moment please,” she said, flicking through the pages. “It is! At the time, it was the world’s first. The Malpas tunnel was 165 metres (541 feet) long and 7.4 metres (24 feet) wide. And it was 5.85 metres (19 feet) above the water level.”
“Gosh. Uh oh, dog problem!”
Aby and Sprite, partners in crime when it comes to digging, had started excavating something that looked suspiciously like a ragondin (coypu) nest. Stopping a dedicated Australian Shepherd digger is hard, but have you ever tried to stop a Jack Russell doing anything it wants to do? It’s nigh on impossible! 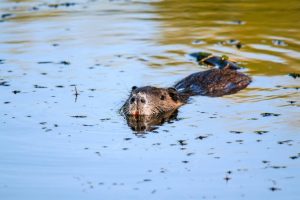 Ragondin look a bit like beavers. Mature adults are a similar size to Sprite. They have enormous orange teeth which can be used to great effect when threatened. It’s something Sprite doesn’t seem to have realised yet. Rapid action was required. 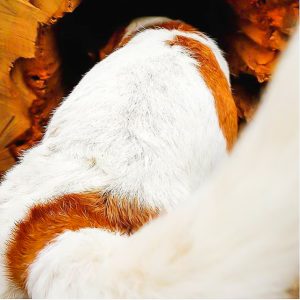 I yelled at Aby while Di dashed over and grabbed an indignant Sprite. By this time he was halfway down the hole so took a bit of hauling. But we were a dog down.
“Wait a minute,” I said, “where’s Max?”
I gave him a call. Strangely, he appeared from under the bridge we had just passed. And he was looking incredibly proud. He trotted up to Di first. 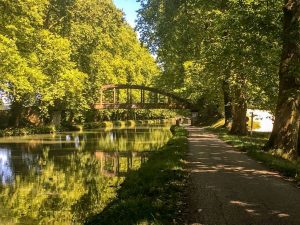 “Oh my God, Beth, do something!”
“What’s wrong?”
“Max, he’s covered.”
“In what?”
“I don’t know, but it stinks.”
“Go on, Maxy, give Di a big kiss!”
“I’m warning you, Beth, this is toxic!”
“Okay, okay.”
She was right. Some dogs love rolling in carrion, others fox poo, but not Max. However, he had evidently found this substance irresistible. So much so, he had wallowed in it and savoured its dubious delights. We were on a public footpath. It could have been badger poop, it could have been a different type of deposit altogether. Neither of us could bear to think about that. The fact was, Max reeked.
“Right, Max, it’s no good. You’ll have to go into the water.”
Luckily, Max is a devoted water dog so getting him in wasn’t a problem. One belly flop later, and he was happily splashing around. The challenge was getting him out again. We had now reached a point in the canal where the sides were sheer. 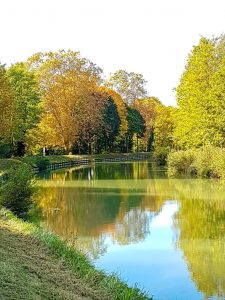 There was nothing for it. We had to haul him out. And, of course, what was the very first thing he did? Joyously shake all over us.
“Argh! Beth, he’s shaking muck all over us!”
“Poo! and he still smells. Sorry, take your mind off it by telling me more about the canal.”
“I doubt that’ll help, but alright,” she said, reaching for the guide. “Listen to this! The canal also had to pass a steep rocky slope at Pechlaurier. Pierre-Paul Riquet, the canal builder in charge, commissioned the use of gunpowder, which was possibly the first use of explosives for civil engineering. At one time 12,000 people were working under his command.”
“Wow, what a huge undertaking.”
“Yes, and it took its toll. Apparently, there were huge problems associated with building the canal. Despite these, Riquet pushed ahead with construction, though it affected his health. He died eight months before it was opened in May 1681.”
“After all that work, how awful!”
“I know. Oh my God, so is that pong coming from Max. See if you can get those bits of sludge out of his ruff.”
“You do realise what they probably are, don’t you?”
“Yep.”
“In that case, you’ll understand why I’m not going to touch it!” 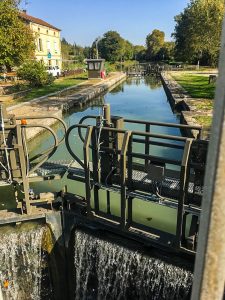 “Well, he is yourdog. Huh! Anyway, following Riquet’s death, his sons, together with the French engineer Sébastien Le Prestre de Vauban, continued work on improving the canal. By 1692 these improvements had been completed, and travellers from around the world came to examine the canal. Although it was successful financially, the canal never carried ships from the Atlantic to the Mediterranean. So there you have it, a potted history of the Canal du Midi.”
Dring, dring!
“Au revoir, monsieur!” we yodelled at our pink cyclist on his return journey.
“You’d make a great tour guide, Di. Aside from being run down by a cyclist and dealing with a stinky mutt, this has been terrific.”
“I’d rather deal with a cyclist than the shower you’re going to have to give Max when you get back. He still pongs! It is lovely, here though, isn’t it?”
As we rounded another bend, we paused to watch a canal user struggling with his manoeuvres. 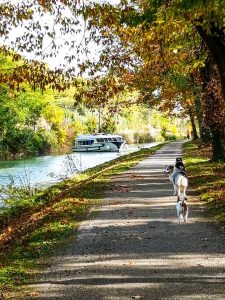 “Absolutely. It looks as though someone else is having a great time too. I wonder how many bottles of wine they consumed over lunch?”
We left them chugging around in circles and turned for home. Our footfalls still soft on that well-worn path, new views of graceful boughs brushing the water and those magnificent lock gates. It had been a truly lovely walk, with one exception.
“Beth, open the car windows, please, I can’t stand that stink!” 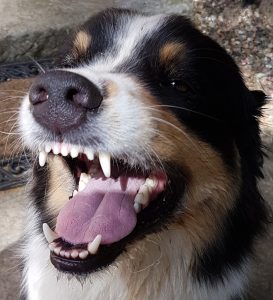