The Famous Tomatoes of Marmande! 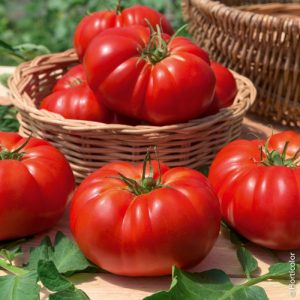 My sister, Di, had a suggestion.

“Want to come to Marmande?”

“It’s a town in the Lot et Garonne. I’m going there to get some equipment for my car. I’ll buy the coffees.”

We set off on a blisteringly hot day, taking a country route west into the Buzet wine-making country. Their official vineyard is near Agen in the Lot-et-Garonne. It’s sandwiched between the Côtes du Marmandais and Brulhois appellations – a paradise for imbibers.

Verdant vineyards garnished with purple and green polka dots were spread-eagled as far as the eye could see. I was amazed. 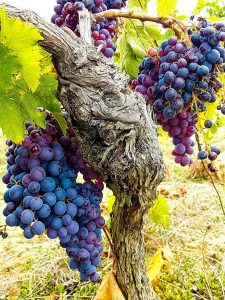 “Wow, no wonder they make so much wine with all those grapes.”

“Yep, and did you know that the Armagnac appellation is just south of us?”

“Huh, I knew it was around here somewhere.”

“And the Cahors vineyards are a little way northeast. In total, there are around 2,000 hectares of vineyards in the area.”

“You’ve been at that tourist information guide again, Di!” 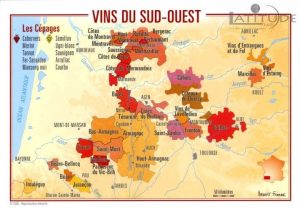 We settled into a comfortable chat about favourite tipples, which took us to the outskirts of Marmande. As we crossed a bridge spanning the River Garonne, Di had a new thought.

“Ooh, I wonder if we’ll see many tomatoes?”

“Why on earth would you say that?”

“Ahah! Well, obviouslyyou didn’t know that this is the largest producer of tomatoes in our part of France.”

“I’m going to confiscate that guide book of yours.”

“No, really, this is interesting. The soil is perfect for them. They’ve been grown intensively here since the nineteenth century. And get this. There are lots of artisanal producers of Marmande tomatoes, including the Grand Master of the Brotherhood of the Knights of the Love Apple. Love apple is what the tomato was called in the Middle Ages.”

“Classic! Fancy having a Grand Master. There has to be a tomato fête.”

“Of course! It’s honoured here every year. They make giant ratatouilles and enormous tomato tarts, which are washed down with the local wine and accompanied by lots of festivities.”

“It’ll have to be next year. It takes place in July.”

We reached our destination to find we had peaked too soon for Di’s rendezvous. It provided an ideal opportunity for coffee and cakes. We headed for a large café close-by. 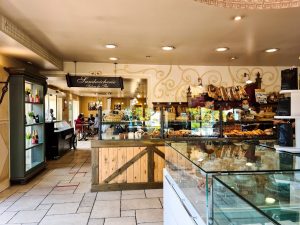 Its innocuous exterior belied the delights that lay within. The pâtisserie was bulging at the seams with goodies. Gawping at the cake selection, we randomly joined a queue, only to be turned away.

We were in the bread queue. While the look of those still-warm baguettes was very tempting, we declined madame’s offer to buy. Our hearts were set on other delicacies. We found the non-bread buying line, which had extended out of the door. 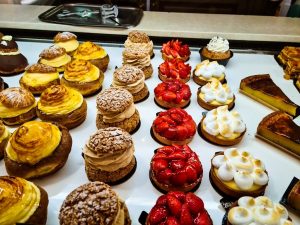 Being a fruity type of person I couldn’t resist a tartelette aux fraises, Di, on the other hand, had her heart set on tartelette au citron meringues, and who could blame her? With our tray of delectables plus aromatic coffees, we found a table outside. 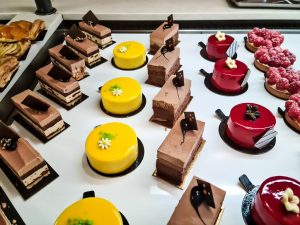 As we tucked into what we declared were among the best strawberry and lemon tarts we had ever eaten, a group of youngsters appeared. Politely staying a COVID-discrete distance from us, I couldn’t help noticing their companion. The pretty girl had brought along her cat. 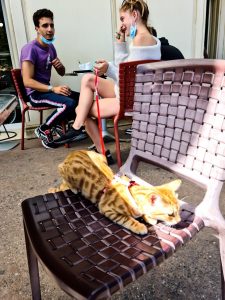 Far from being nervous, the curious young ginger ninja decided he fancied a nibble of our tarts. We may be ardent cat lovers, but when it comes to cakes, we do have our limits. Moggy junior was politely declined his treat, and he returned to mum for a snuggle.

Refreshed and ready to go, we were still an hour early for Di’s appointment. I pointed at a dot in the distance. 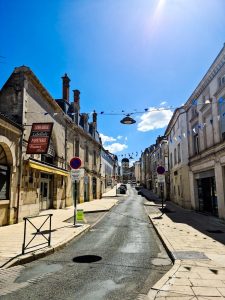 “Why don’t we have a quick walk up there?”

“Great idea, it looks like the old part of town.”

Off we pottered, enjoying the sunshine and surroundings which were gradually morphing into older, grander buildings. We passed a magnificent courtyard with mighty oak doors; it seemed to be the entrance to a military establishment. 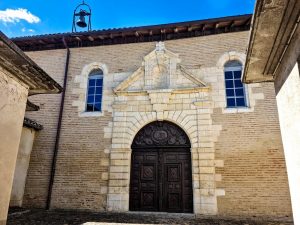 Farther along, we discovered half-timbered houses, one in particular caught our eye with its diamond pattern frontage. Since the town was founded by Richard the Lionheart in 1182, we guessed it must have been an original medieval property. 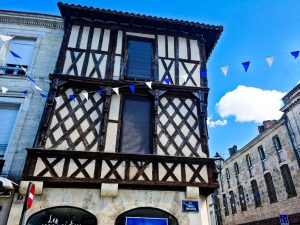 As with so many municipalities in the region, Marmande was at the centre of a turbulent period in history. The crusade against the Cathars, the Hundred Years War, plague, and the Religious Wars dealt the town a series of severe blows. Despite this tortuous past, it was evident from what we were seeing that it had managed to preserve remnants of a history spanning almost a millennium. 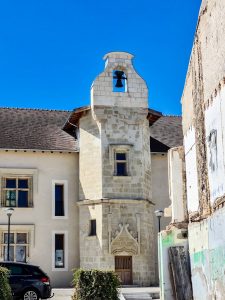 Still in Middle Ages mode, what we saw next couldn’t have been less medieval if it tried. A colossal clock with signs of the zodiac on the dial was positioned in the centre of a square. A large bell with Chinese characters was suspended above. There had to be a story to this! 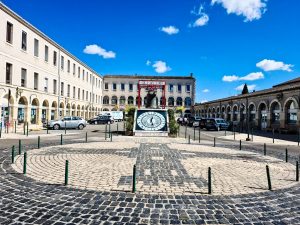 Apparently, it was the incongruous brainchild of the then town mayor, Gérard Gouzes. On his return from a trip to China in 2011, he announced that the Chinese of Yuncheng, with whom Marmande were considering a possible twinning, wished to offer a typical bell, accompanied by a clock. 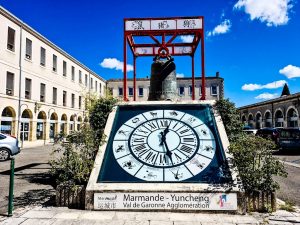 Despite many disagreements on suitability and cost, the mayor had his way. The bell was eventually purchased from the foundry in the city of Wu Han.

Gérard Gouzes was allegedly delighted with the furore surrounding the installation of this monumental clock and was quoted as saying, “The controversy will create curiosity and attract people. And I do not regret it. This symbolic gesture will resonate in our relations with China.”

Still unsure whether we should be impressed or amused, we strolled on. The dot we had been heading for finally took shape. It was the Church of Notre Dame, Marmande. The sun dazzled us as we admired this remarkable building. 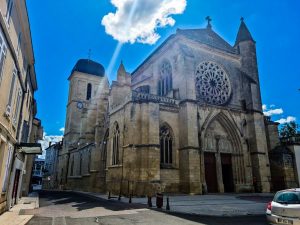 With its Anglo-Norman style architecture, it was built between the thirteenth and fifteenth centuries. At one time, the church had a fine Gothic spire with a copper cockerel on the top. There’s a quirky tale about this too.

In 1672 the consuls in Marmande (and I have no idea why) used the spire to store the town’s reserves of gun powder. Lightning struck the spire which exploded, causing significant damage to the chancel and demolishing the steeple section. It was a sad end for the steeple, but another gave rise to another fascinating story. 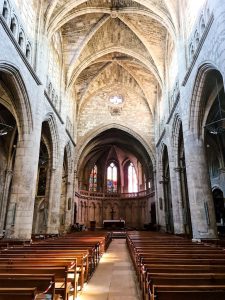 I walked inside the church. It was cool, tranquil. The nave was paved with immense slabs, and wooden pews flanked either side. Tape marked points of social isolation. Even here, the perils of coronavirus were all too evident. The graceful vaulted ceiling, simple yet so elegant, restored serenity to this beautiful place.

Back outside and we spotted a sign for the cloister gardens. These were a must-see. We found information telling us that only one gallery remains today. The pilasters in the renaissance style are decorated with floweret and diamond motifs, and the capitals are covered in acanthus leaves.

The garden was created in the 1950s. Its design was inspired by the gardens at the Château de Langeais. Observing the seventeenth century rules for topiary gardens, boxwood hedges and shaped yew trees were planted. Walls of the arbours evoke the arches of the cloisters that have since disappeared.

I was dead keen to have a look. Di stopped, looked at her watch and gasped.

“If you hadn’t spent so much time staring at that clock we’d have time to take a good look. I had a peek while you were in the church. It’s fantastic, by the way.”

“We’ll have to come back another time.”

With that Di raced off with me moaning in tow.

Happily, we did make it in time for Di’s meeting, although I will admit to us both being a bit hot and bothered by the time we got there. As usual, the folks involved were utterly charming, graciously ignoring our flustered state.

By the time Di had finished, it was getting towards lunch, and that café beckoned invitingly. It was one of those moments. You know you shouldn’t, but you do anyway. 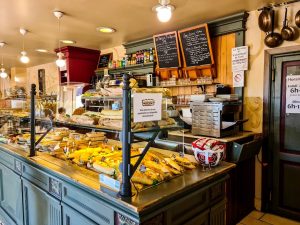 “Erm, Di, did you notice those savouries in the café?”

“I did. I’m starving after galloping back all that way. Fancy a coffee and snack before we go home?”

It had been another fun excursion, another French town – partially seen, and did we see a famed Marmande tomato? Nope, not a single one, but those cakes were delicious! 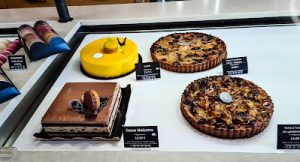