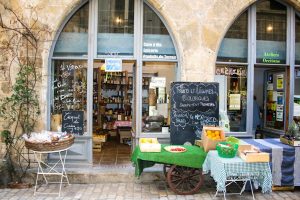 Imagine what it would be like living in the Middle Ages, the early period. In a town blessed with a formidable natural resource which contributed to its reputation as a significant trading centre.

It all started around the 8th century. This place has history coming out of its ears, and I was dying to visit. I reminded my excursion-averse husband about his promise.

“Honestly, you did. It’s a beautiful day, perfect for sight-seeing.”

“Alright, alright, but we have to be back mid-afternoon, I still haven’t fixed the tractor.”

After a minor contretemps with SatNav lady, we set off on our two-hour journey. A voyage into the unknown to Saint Antonin Noble Val. A mouthful of a name, but one we would soon realise was fit for purpose.

Our route took us past Montauban, the principal city in our area, through several pretty villages including Caussade. Also known as la cité du chapeau (hat city), straw hat making was their thing. The hatter industry flourished here, peaking in the late 19th century. 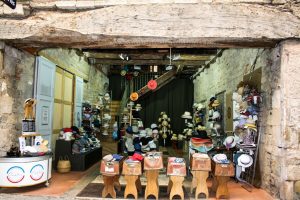 Deeper into the countryside, we went. There were none of the gentle fruit-growing landscapes we see in our area. This was big-boys rugged terrain.

“I can’t on this bend, obviously.”

“Never mind, you’ll see it in a moment.”

Jack negotiated another tight corner, and there it was again. A slash in the landscape. We had reached the Aveyron Gorge, a natural feature more than 50 kilometres long. Vertical cliffs, some over 500 metres high, towered above the river flowing far below. A vast forest covered the landscape like a verdant duvet, bisected by the limestone fissure. It was an incredible scene. 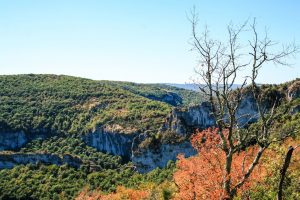 Blind hairpin bends marked our descent. Jack slammed on the brakes as we were halfway round another.

“What on earth is that man doing in the middle of the road?”

“Blimey, that’s dangerous! He must have been crossing to reach the viewpoint. What a shame we missed it.”

“Bloody hell, we only just missed him. What a ridiculous site for a picnic place.” 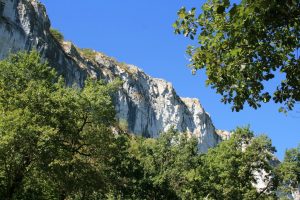 As we descended, the gradient became steeper still. Stone slabs the sizes of houses were stacked into skyscrapers on our left. To our right, we snatched more sightings of the gorge through a blur of scrub and scabby trees. Another tricky bend, and there it was, Saint Antonin Noble Val, a secret town nestling at the confluence of the Aveyron and Bonnette rivers.

The closer we got, the clearer it became that this was no ordinary settlement. Narrow streets guarded by fortification fragments, archaic buildings and stone obelisks, I couldn’t wait to start exploring. There was just one problem. Modern cars and medieval towns aren’t a match made in heaven. Finding somewhere to park was impossible. It didn’t take Jack long to get frustrated. 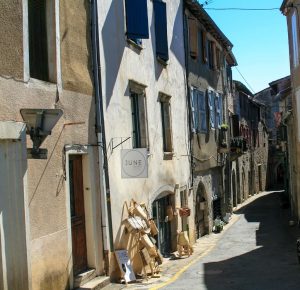 “We’re going to be driving around in circles all day at this rate. You get out here while I find somewhere to leave the car.”

“Okay, where shall we meet?”

I leapt out and walked beneath a massive cathedral-like archway into another world. Just for a moment, I was completely alone on a cobbled way lined either side with medieval buildings. Some looked like homes, others, shops with living quarters above. 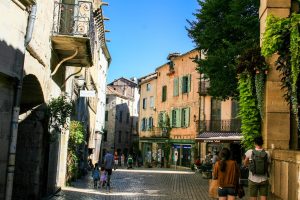 Entranced, I wouldn’t have been at all surprised to see men appear wearing tunics, and ladies in light robes. After all, it was a hot day. Instead, a cat strolled into view and then a fellow tourist. The spell was broken. 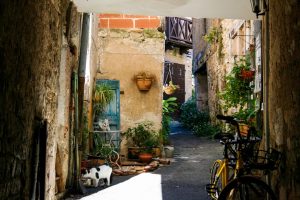 The narrow street was interrupted by openings to intriguing allies. I couldn’t resist a peek. There were balconies, twisty passageways, old and new masonry and planters, which suggested these were folks’ homes. Oh, and another cat. 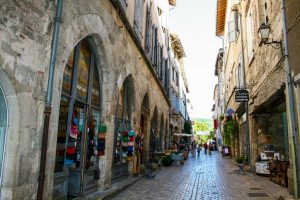 Back out, and I passed several different shops. Chapeaux and Casquettes, a thumbs-up in support of neighbouring Caussade, was impressive with its frontage buttressed by a massive timber beam. There were épiceries, boulangeries, even a book shop. Did I nip in for a quick browse? Of course! 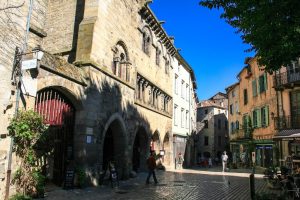 A magnificent building caught my eye; it seemed somehow grander than the others. Maison Romane is one of the oldest civic buildings in France. Retired from duty now, way back in the 12th century, the Town Hall was used as law courts and base for the governors. 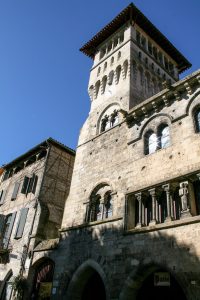 I admired the great tower, solid and dependable against the blue sky. It was a Tuscan-inspired creation by Eugene Viollet-le-Duc, who knew a thing or two about architecture. Among his major restoration projects, Viollet-le-Duc was renowned for his work on Notre-Dame de Paris and the medieval walls of Carcassonne. It was he who restored this building in the 19thcentury.

As the way broadened, cafés came into view with residents and visitors enjoying morning coffee in the shade of squashed together buildings. Soft pastel paint, pretty flaky now, was evident on walls, as were the gnarled vines. Wood stanchions, battered shutters and balconies with intricate ironwork designs, I gazed in wonder at them all, as did another cat, who had become my guide. 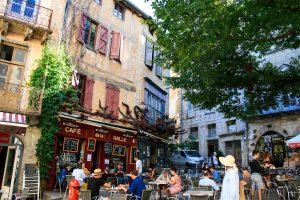 Ruing my decision not to nag Jack into coming with me, I dragged myself away to explore the market hall. Another imposing building, it dates back to 1840, and it is still fit for purpose. 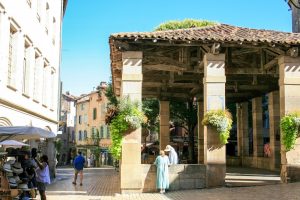 I love the thought that this hall and the surrounding streets are filled every week on market day with flowers and flavours from the locality. It’s a tradition observed by most towns and villages in our part of France.

I continued, passing more intricate alleys, no cats down those. There were little restaurants snuck discretely behind protective walls, lit by lanterns, and candles on tables, each as charming as the other. 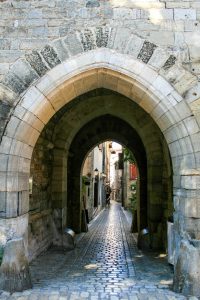 Before turning back, I looked along a narrow street with its immense limestone backdrop. It was so skinny, the roofs of houses almost met across the way. 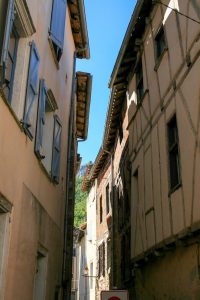 Reluctantly, I left my feline companion and returned to find Jack relaxing in the shade, suspiciously close to the car.

“I thought you were going to join me?”

“I decided to leave you to it. It’s far more peaceful here.”

“You’ve really missed out. Never mind, though, I grabbed some tourist info. Listen to this.”

“Ah, but I have to tell you, it’s such an interesting place. Oh, and there were cats all over the place.”

“Lord, we’re covered in cats at home, I don’t need to hear about more! Stick to the fascinating facts, please?”

“That’s old, are you sure it’s still passable?”

“Absolutely. Interestingly, the governors used to levy tolls on it. And talking of wet stuff, believe it or not, the town has several underground canals, some of which provided water for the public baths.”

“That rising damp wouldn’t be much good for rheumatics in the winter. Huh, and I thought the medievals were a mucky lot.”

“Perhaps it was the Roman influence. Anyway, several industries thrived here. Tanneries were established in the 13th century, and provided much of the town’s wealth during the Middle Ages.”

“H’m any idea how many hides were processed?”

“Hang on, yep, 200,000 a year during its heyday. Eventually, the industry declined and was replaced by others, including walnut oil production.”

“Time to put away that tourist blurb and enjoy the view in front of your nose. It’s superb.” 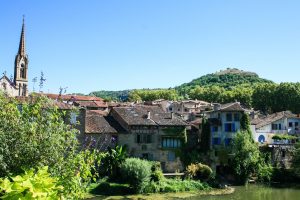 We parked and walked onto the bridge. The studded steeple of a splendid church dominated one side. A cluster of buildings surrounded it, some whose bases were lapped by the Averyon. There were homeowners taking tea on balconies. The scenes were spellbinding.

The other side marked the point where La Bonnette flows by the town, and a river walk, which in ancient times was favoured by the town’s monks. The benign river was a-bob with enthusiasts exploring in canoes and kayaks, the perfect way to enjoy this waterway on a hot day. 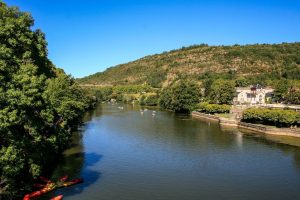 Time was against us now, so we returned to the car. Jack took us out on a different route. A skinny one-track road, he pulled off at a rough entrance.

“Here you go, I reckon if we walk down here, we’ll be able to satisfy your passion for panoramas.”

I bet he wished he hadn’t said that.

In amongst the brush, we discovered a rocky trail. We had no idea whether animals, drovers or even pilgrims had used it, but the rock base was smooth with use. 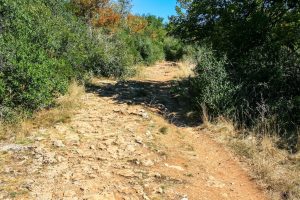 Now both determined to reach a point where we could catch one last view of this remarkable phenomenon; we trudged on in the heat. Cussing and puffing, we fought through a patch of gorse, and suddenly there it was. The vista was utterly extraordinary.

Those cliffs, ledges, rocks, and forest as far as the eye could see, it felt as though we were on top of the world. We stayed for a while, absorbing the views, enjoying the moment. 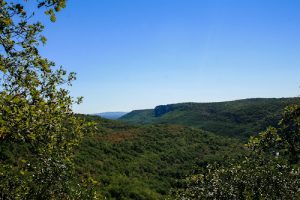 “Thanks for this, Jack, it’s been a lovely day.”

“The geology is certainly impressive. I’m not sure I’d like to live in the town today, though, it must be seething with tourists. Well, that’s if they can find it.”

“True! I wouldn’t trade it for our place either, but you must admit it was worth coming. What a fantastic hidden treasure.”