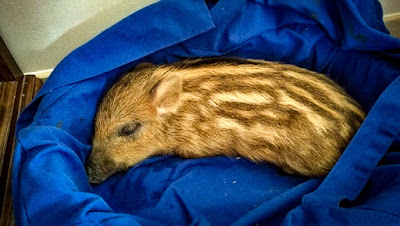 “Have you told Beth?” asked Patrice, popping his head around the door.
“No, not yet!”
Patrice shrugged, gave me a nervy wave and disappeared.
This awkward exchange between Melanie, my pal, and her husband occurred during my ‘nails’ appointment. Melanie, a beautician who works from home, was applying a coat of gel gungy stuff at the time. By the way, I know, it’s uber-girlie, but with my outdoor lifestyle, my fingers suffer from that just-been-attacked-by-the-cheese-grater look if I don’t get them fixed. It’s a damage control situation.
The pair of them looked so shifty I had to ask.
“Well, what?”
Melanie looked troubled.
“The problem is it’s illegal here in France.”
“I see,” I replied, not seeing at all. “Then don’t feel you have to tell me.”
“I must, we need your help.”
This was tricky. We’ve been through many scrapes in our short history here, but being incarcerated hasn’t featured.
Yet.
Still, I thought, they’re our friends so we’d better help if we can.
“Okay, in that case, you’ll have to tell me.”
Melanie stuck my nails in the UV machine to cook and began her tale. Here’s the abridged version.
Patrice is an animal lover with a reputation for rescuing and recuperating injured creatures. He was out walking in a remote area with his dogs when two baby boar burst out of a bush. As Patrice fought to control his dogs, one of the babies scampered off into a thicket. The other tried to follow but was evidently weak. It collapsed. Bleeding from a hidden wound. 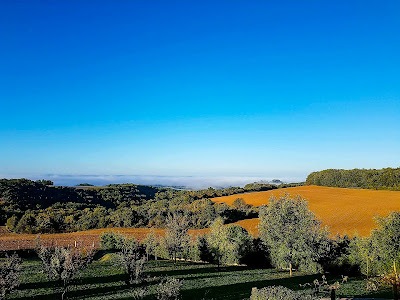 Patrice hunted around for their mum, but there were no other boar in the area. He briefly examined the piglet, found the cut and made a snap decision. Grabbing his rucksack, he popped the little one inside and took it home.
Melanie is chic (positively gorgeous, actually), and very house proud. Therefore, you might imagine her reaction when she returned from shopping to find piglet swaddled in a baby cot in front of the fire.
It was a familiar scenario. Melanie’s initial aaah’s quickly evaporated as the youngster’s bowels were activated. She tolerated the situation for a few days before demanding its removal to the garage.
Over the next few weeks the youngster, fed on cow’s milk, recovered from what turned out to be superficial injuries. It was developing fast, she said.
“Presumably, Patrice released it back into the wild like he normally does?” I asked.
“No, he refused,” Melanie said, arching her brows. “He was worried it would get shot by the local hunters. Anyway, he was too attached to it. The next problem was that it grew and we couldn’t garage the car without risking squashing it.”
“Oh, so what happened?”
“It’s in the kennel with the dogs.”
“Gosh!” I hadn’t expected that one.
“It’s illegal to raise wild boar in captivity without a proper licence,” she said, “so it’s becoming a problem with our neighbours. We have to keep it in the shed during the day, and Patrice lets it out at night to play with the dogs.”
This was sounding weirder by the minute.
“So now that it’s a bit older,” continued Melanie, “we wondered if we could release it into the enclosed section of your forest where it will be protected from hunters.”
To hang with regulations! Having saved its life, I felt the least we could do was to give the little one a home. 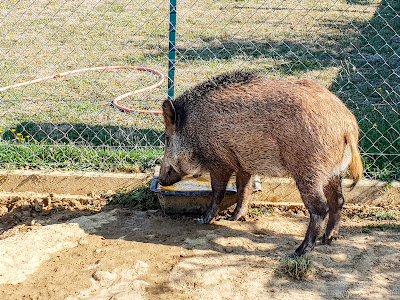 “No problem,” I smiled, still under the impression we were talking about a relative tiddler. “I know Jack will agree. If Patrice can bring it over, we’ll take it.”
Patrice reappeared at the end of my session and was thrilled at my decision.
“You must see her now,” he grinned rushing off across the lawn.
The dog’s compound was tennis court size with a big shed in the middle. Shooing his three bouncy mutts to one side, he carefully opened the door.
“This is Sophie,” he beamed.
And there she was.
Tiddler? Nope. Sophie was a near full-sized, extremely healthy, tubby boar.
Thinking it was playtime, Sophie gambolled determinedly towards the doorway, embedding me in the wall as she swept past to join her pals.
Patrice clucked at his beloved, chiding her for being clumsy and tried to entice her back in. It wasn’t easy. Sophie thought she was a dog, and she wanted to romp.
“What do you feed her on?” I puffed, as she gallumped past me for the umpteenth time.
“Dog food. She loves it.” 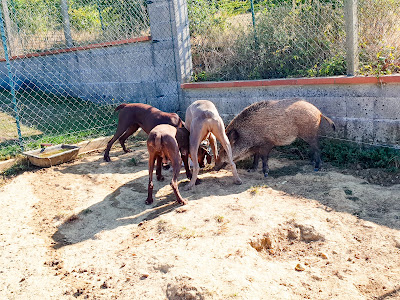 “Of course she does,” I replied, wondering whether she ate bones too.
We finally drove Sophie back in where she settled down amiably.
I returned home to brief Jack, whose reaction was predictable.
“Hah!” he chuckled, “we’ve come across some strange situations here and this one’s right up with the best of them.”
Time passed, as did my next nails appointment. Was Sophie ready? Not yet, apparently. Why? I never did find out. Meanwhile, Sophie was still growing.
The call from Patrice finally came early one evening about six weeks later. He had Sophie in a cage and could he bring her over straight away? Of course, we agreed. Soon after, Patrice turned up in his Peugeot. It’s a little car so we naturally presumed there would be some kind of trailer behind.
“Bloody hell! Look at the back of the car,” said Jack, “the tyres are almost touching the wheel arches. It must be in there!” 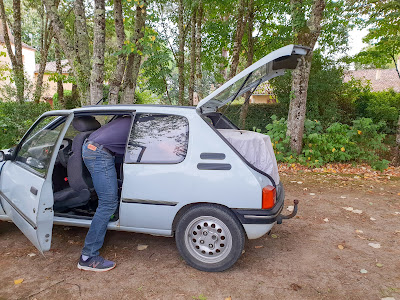 A large blanket covered something in the back. It filled the seat and either end pressed against the windows. Patrice opened the rear door, removed the drape and out rushed an explosive pong of hot boar. His passenger was indeed Sophie.
Sophie wasn’t at all happy at being incarcerated. We could hear the growls and see the stamping hooves as she strained to break free. She had also grown quite a bit. A lot, actually. Fortunately, the makeshift cage Patrice had somehow squeezed her in had metal bars otherwise she doubtless would have eaten her way through in seconds.
Fortunately, Nathan, our forester, was still around and was pressganged into helping. The four of us carried the heaving mass of grumpy boar and loaded her into our old 4×4 forest vehicle, which also buckled under the weight.
“How on earth did you manage to get it in the car by yourself?” asked Jack.
“She trusts me,” said Patrice, “I gave her lots of dog biscuits and she walked in quietly.” 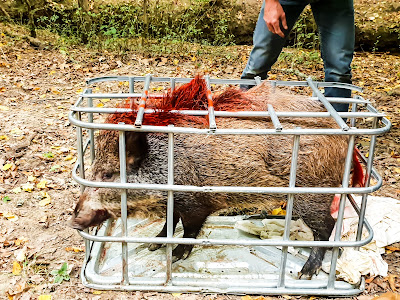 Good old Soph wasn’t at all quiet now. The car rocked on our short journey to her new home as she tried to eat her way out. We had folded down the rear seats to make more room for us all and I was stuck in the back with her. Mid-chew, Sophie paused, turned her shaggy head and eyeballed me. I froze. Vivid memories of that scene in Jurassic park involving Velociraptors popped into my head. Sophie may not be a dinosaur, but she certainly wasn’t an animal to be messed with. I didn’t even blink.
We reached our destination unscathed and carefully removed the cage. Patrice produced an electric power tool and started removing bars. Halfway through he stopped.
“Merde! I forgot.”
“What now?” said Jack, trying to stop Sophie bulging out of the sides.
“I have paint.”
“What?” we both cried.
“I must colour Sophie’s mane so you can always identify her in the woods. Then you can tell me when she has her first babies.”
Before Jack could give him an opinion on this latest brainwave, Patrice dashed back to the car. He returned with a can of spray paint, the type commonly used to mark sheep. He took careful aim and covered her long spiky mane with crimson red. Then he stood back, shrugged and showered a big circle of the stuff on her backside.
“Bullseye! So now we have a punk pig roaming around the forest. It’s going to be hard to miss this one,” observed Jack. 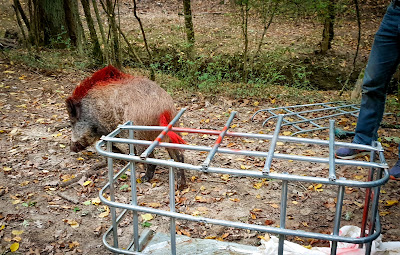 The final screw was removed, and the cage clunked apart. Sophie gave herself a shake, completely ignored her owner’s coos, and made a beeline for the brook. We followed to see what would happen.
Sophie sank in the water and had a good old wallow. I couldn’t help smiling. It was probably the first time she had ever done this, an act so natural for these animals. It must have felt wonderful after her scary trip. 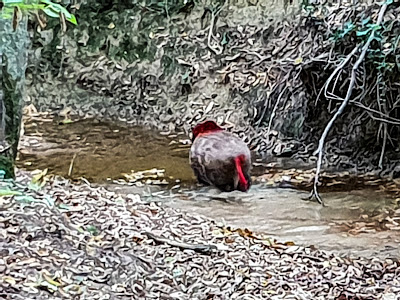 Despite Patrice’s anxious twitters, she continued to disregard him and us. That was fine. If she was going to cope in her new habitat, she needed to become independent very quickly. We left food in the area that night and for several weeks after that. 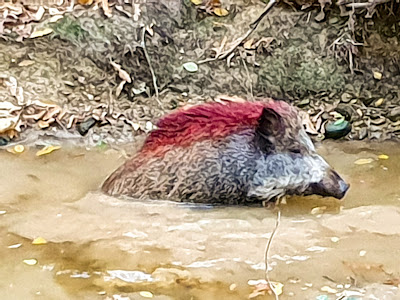 It was a while before we saw Sophie again and we were becoming concerned that she hadn’t coped with being returned to the wild. Our worries were unfounded.
One day we found her grazing in the field. It was unmistakably Sophie. Her brightly coloured mane stuck up like a beacon. And contrary to my fears, she had gained weight. That boar was on top form. She sped past us, kicking up her heels as she galloped across the field, evidently happy in her new environment. 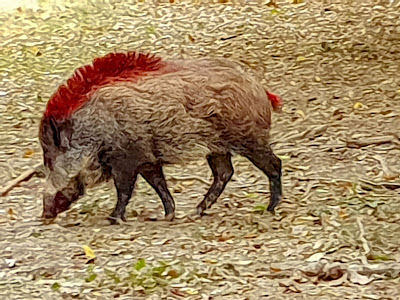 I reflected on the grand adventure Sophie had experienced in her young life. If it hadn’t been for Patrice’s kindness, she would surely have been dead, and we would not have had this magnificent animal roaming free in our woods. We still see her now and again. Her tall spiky mane is very distinctive, and there is still a faint trace of red paint.
We love our punk pig! 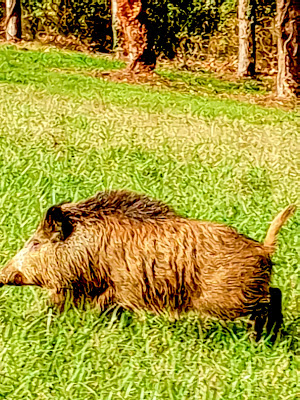