The Return of Fat Dogs 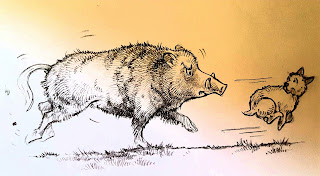 It all started so confidently. Our decision to buy a property abroad seemed entirely straightforward. Lots of people do it, so what could possibly go wrong? 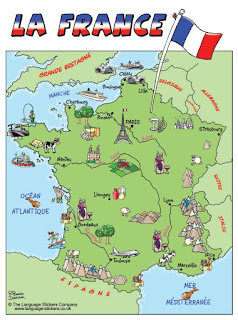 Jack, my husband, and I battled through a shortlist of European countries in our price and travel range. Then we remembered another facet – Jack’s temperament. Uh oh! None of us are perfect, and certainly not me. However, I am, on the whole, a deal more patient and far more tolerant than my husband. In fact, just about everyone is. He also has an extremely tedious sense of humour, particularly when it comes to dealing with other nationalities and their unique traits. This, combined with other, more balanced, reasons, ruled out three of the main contenders and we settled on France.
I produced a shortlist of properties to visit, which ended up being quite tricky because of the type we wanted to buy. But, by plugging away for ages, I got there in the end and planned our journey.
This presented another small challenge because I’m hopelessly devoted to our dogs. At the time we had Sam and Biff. Jack tries to create the impression of not sharing my devotion, grumping that he simply tolerates them. But I know differently. He’s the same about all animals, soft as butter and regularly caught with a sheepish expression in mid-cuddle with one of them. That said, when I shared my blindingly obvious logic that Sam and Biff should travel with us, he failed to see my point – initially. Nevertheless, after a slightly longer than usual filibuster, he came to his senses and all was agreed. 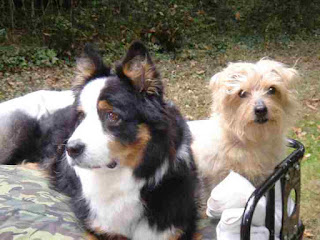 The eve of our departure finally came. Gosh, it still seems like yesterday. We had spent much of the day packing the car, unpacking the car, repacking and arguing about it. Bungee elastic cords became Jack’s friends as bags and slippery items were strapped securely, leaving a perfectly safe makeshift kennel for the dogs. 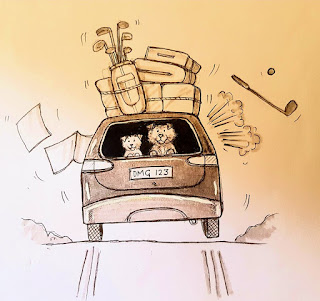 Many of you already know all this but, by way of a tiny outtake, I can tell you that during the night I barely slept a wink. And why? Because I was so excited. The other point I didn’t mention was Jack’s pre-departure-check discovery that one of our tyres was flat. Oh, and then there was Sam. Normally a dog with champion bowels, he chose that very morning to produce a gusty sample of visceral fluid. I suppose this could have been an omen of iffy things to come but, as I used my essential baby wipes to clear up the offending area, I didn’t give it a second thought. Jack thought differently, but Jack always does. After a delayed departure we set off in mizzling weather, which matched his mood to a tee.
It’s no secret that our early adventures didn’t go to plan. At all.  Who would have believed that a three week house-hunting trip could place us in such crazy situations, including at least one that was life threatening? Such a thing had never entered our minds. Nor did the prospect of meeting the many bizarre characters involved in our quest. Then there were the properties themselves – ranging from unacceptable, to appalling, and in one case, very scary indeed. Every day brought a new misadventure, one of which caused Jack to remark, “You could write a book about this.” So I did. There was such a lot to say. 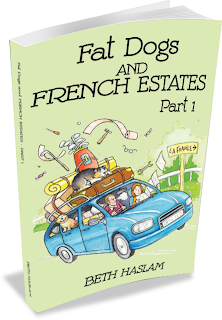 I realise brevity is entirely alien to my writing and, let’s face it, descriptions are my friends. My aim is for you, as closely as possible, to live our experiences as we did, and to create accurate visions of each key scene and main character.
Unsurprisingly, Fat Dogs and French Estates Part I quickly spilled over into Part II. 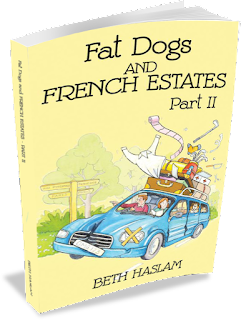 More disasters, ever-stranger people, mechanical mishaps and greater sinful canine shenanigans gave me oodles of material to share. Some of it was toe-curlingly awful to recount, but there was a very clear theme cementing itself on our hearts. Despite everything, we were falling ever more in love with France.
Book II came to an unexpected conclusion and Fat Dogs Part III brought with it a project we didn’t anticipate. Was it hard? At times it was dreadfully hard. It formed the third natural piece of our documentary jigsaw, one that many of you kindly asked for. And thank you so much for making this such a success. 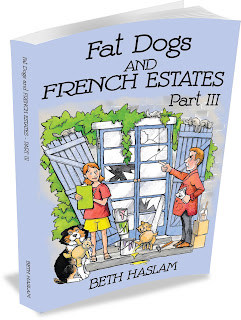 But that was by no means the end of the story. Meanwhile, and entirely separate from the various challenges we were battling with, the animal-loving side of me created a further chapter in my life. As an addition to our two dogs, we’d acquired a cat – but more of that later. I began indulging in chats about our cuddly feline with my pal, Zoe Marr. Rather than gossiping idly about our respective moggies’ personalities and mishaps, we decided to channel our energies into helping cats in need. Of course, that didn’t stop the daily cat exchange, but that’s animal lovers for you.

Completely Cats was soon created. With it came the formation of a wonderful relationship with International Cat Care, a worthy charity whose missions on feline care and education are a perfect match for our aspirations.
We decided to publish a book of short stories about cats. This way we could raise direct funds for the charity and spread the word about its work. We appealed to cat-lovers to come forward with their tales, and they did so in droves. Our project very quickly became a perfect example of teamwork.
Our book, Completely Cats – Stories with Cattitude, could not have been created without their contributions, or the support from our Facebook and Twitter friends. Many, many of you have been part of this. You went the extra mile to help get our project going. You shouted about it on your own social media, encouraged us with your comments and alerted your friends.

And they weren’t hollow words. 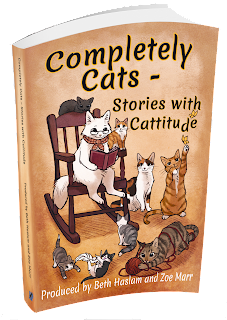 The book was published on the 21st August and with your help it got off to a racing start with sales results speaking for themselves. It was immediately listed as Amazon.com cat category #1 Hot New Release, and in the same category shot to best seller #3 on Amazon.co.uk behind James Bowen’s, A Street Cat Named Bob. (We can live with that!) Our first 5* review came in three days later. Howzat for an example of teamwork in action?
We are genuinely astonished and humbled by the kindness and support we’ve had, and will never be able to thank people enough. International Cat Care loves the book and is as thrilled by the response as we are. So, whatever else I might find myself involved with, I shall always continue to support and promote this cause.
But, in the back of my mind, there’s always that feeling. It’s never far away. I’m dying to share that fourth Fat Dogs piece of the jigsaw with you.
Fat Dogs and French Estates Part IV.
Of course Jack hates to admit that he’s become personally absorbed in the process but, every now and again, he’ll say something like, “Have you told them about xxx yet?” or, “Bloody hell, you’d better stick that incident in the next book. They’ll neverbelieve it!” or, “And what about Bussiton? Have you written about him?” Well, actually, I haven’t. But I’m planning to. 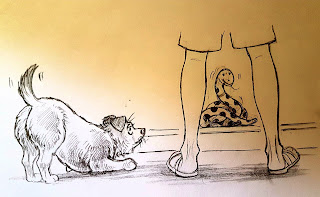 You might naturally assume our project concluded with an idyllic retirement vision of beaches, deckchairs and fine French wines. Nothing could be further from the truth. Those things continue to be the stuff of my poor, long-suffering husband’s dreams, but they’re unlikely to arrive anytime soon.
Now our Completely Cats project is padding around the Amazonian vapours, I’m going to quietly sneak off to begin my next episode of our adventures. Things happened that we never ever imagined. I mean, for goodness’ sake, who would have guessed that I would become a wannabe expert chainsaw operator, or a wild rabbit wrangler? Not me! Equally, I had never dreamed of taking national French exams – in French. (Mind you, that did turn out to be rather a nightmare.) And then the super Polish chaps we ended up working with. Smashers, every one, but – really? In order to start gambolling quickly I won’t be able to bring you my usual yarn next month. Instead, I’m hoping to persuade one of my author pals to share one of their blogs. If they agree I guarantee it’ll be a great read.
Despite having to divert my efforts for a few weeks, I’ll still be around, but I do need to focus for a bit. I sincerely hope Fat Dogs IV will justify the support you’ve already given me. Thank you so much for being part of our French adventures so far. They just wouldn’t be the same without you, and now you’re very much part of them.